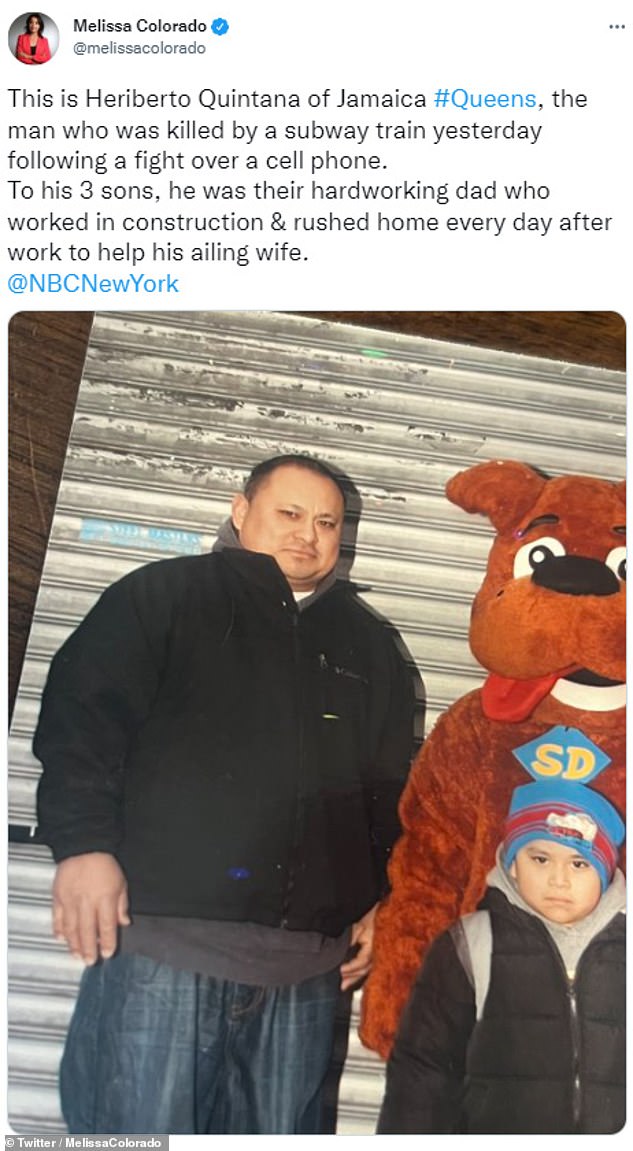 The 48-year-old man who died Monday after falling onto subway tracks and being hit by a train after a scuffle was a father-of-three who was hurrying home to bring his wife to a doctor’s appointment.

Heriberto Quintana died Monday after bumping into a fellow passenger on the platform and knocking his phone onto the train tracks.

When he refused to retrieve the phone, the two passengers fought and Quintana ended up on the tracks with a train barreling toward him at the Queens subway station.

Hilda Rojas says she had been waiting for her husband to take her to a dialysis treatment appointment, but learned about his death when he failed to show up.

She says she received a call from the hospital saying her husband was there. When she asked to speak with him and was told no, she knew something was wrong.

The devastated widow told PIX11 through tears: ‘I  want justice for my husband because they took his life, just because of a phone. He was my helper. He was my provider, and now I’m alone.’

In an interview with CBS, Rojas said Quintana had been a devoted father to a 14-year-old and two adult children.

She said he was a kind man who didn’t fight with anyone.

Quintana and Rojas had lived in the US for decades after immigrating from Mexico.

Quintana worked in construction to support his family. His wife said he had recently changed jobs, which is why he had begun taking the train.

One of Quintana’s sons described the incident to PIX11:

‘The conflict started by my dad accidentally pushing the guy, bumped him. And I guess the guy dropped his phone on the train tracks. And the guy got mad, and that’s when the conflict started – the fight. It’s crazy, over a damn cell phone.’

The family say they hope to be able to raise funds to transport Quintana’s body back to Mexico for burial. 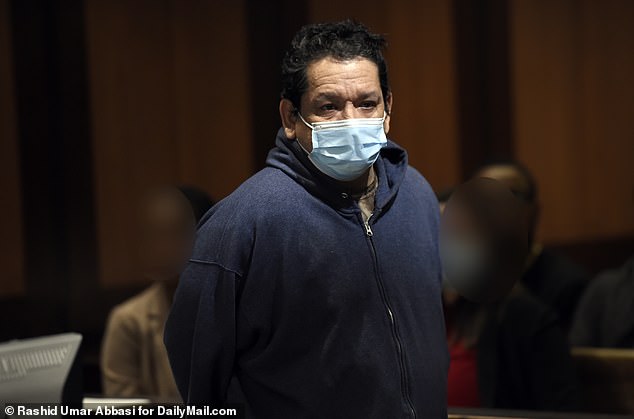 Garcia appeared in cournt on Monday night. He was held in custody overnight and arraigned on Tuesday 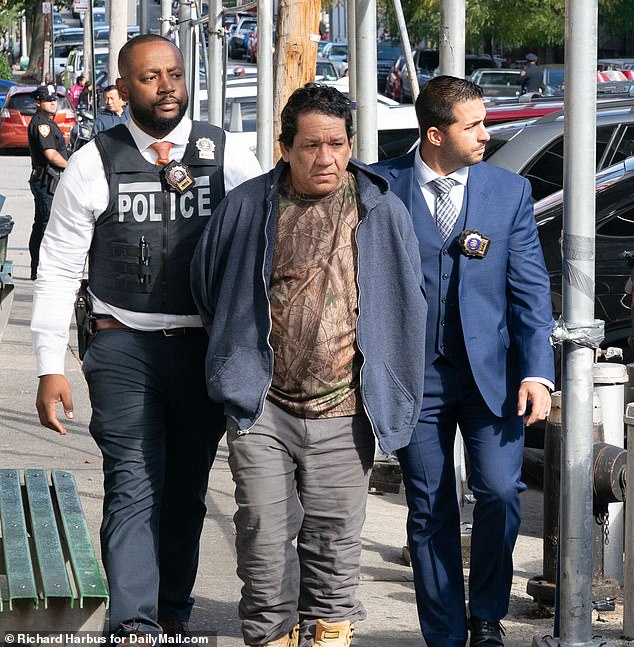 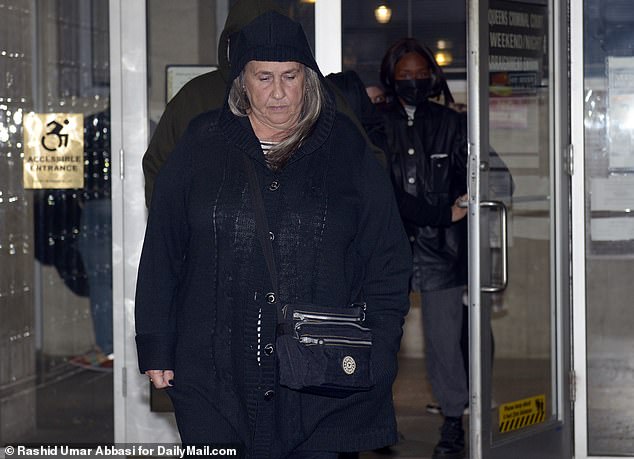 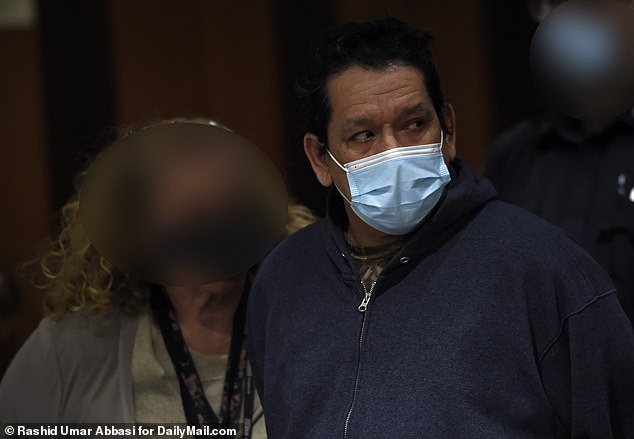 Carlos Garcia, 50 appears before Judge Lentz at the Brooklyn Criminal Court for the murder of Herberto Quintana. He was remanded into custody on Tuesday 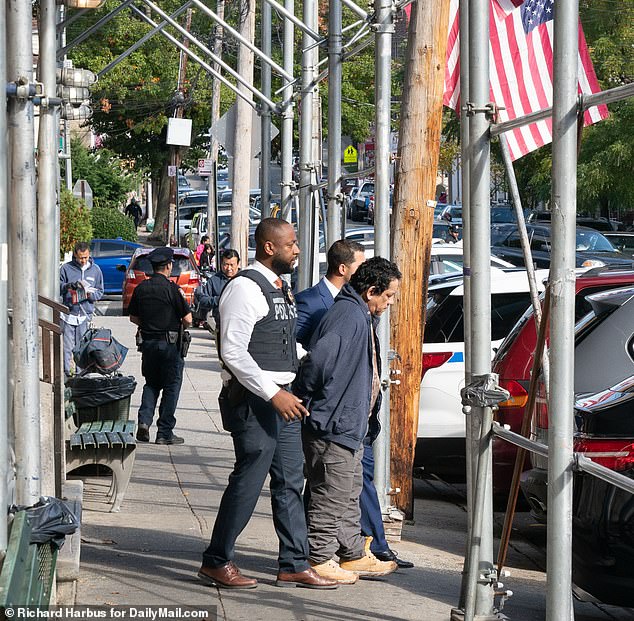 Carlos Garcia, 50, was charged Tuesday with manslaughter, following the incident. He had appeared in court on Monday night and was held in custody. According to ABC7, he does not have a significant criminal history.

After Quintana bumped into Garcia causing his phone to fall onto the tracks, Garcia demanded Quintana go get his phone and when he refused, the two began arguing in Spanish and a shoving fight ensued.

According to the NYPD, Garcia was removed from under the train with severe trauma to the body and transported by EMD to Elmhurst Hospital where he was pronounced dead.

Quintana died from blunt force injuries and his death was ruled a homicide, according to the Office of the Chief Medical Examiner.

He is at least the twelfth person to be shoved in front of a subway train so far this year, and the second to die.

MTA President Richard Davey spoke about the incident Tuesday during a stop at Union Square.

‘My god, please, de-escalate situations,’ he said. ‘We can get your phones or person effects that fall on the tracks. We do it all the time.’

Though the MTA has been focused on placing more officers at subway stations in recent months, but despite officers being on the platform Monday, their presence doesn’t always help.

‘The police were on the platform yesterday when that incident occurred.

‘In some of these senseless crimes that are occurring, even the presence of police hasn’t been able to stem that,’ said Davey. 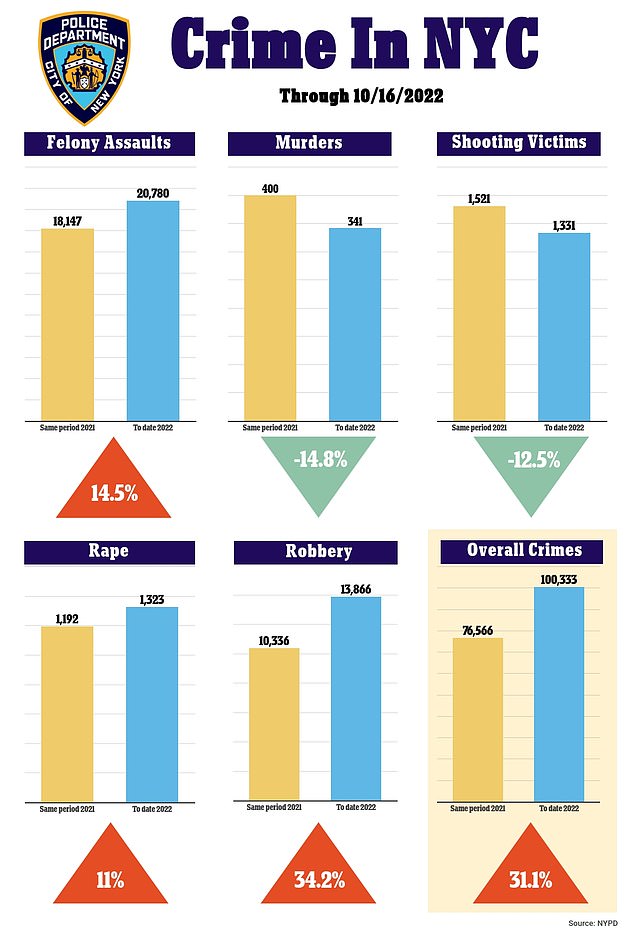 Despite consistent petty and violent crime occurring across the city this year, NYC Mayor Eric Adams claimed on Monday that it is merely a ‘perception’ that crime in the Big Apple is ‘out of control.’

Adams said on Monday that he and law enforcement are fighting the ‘actual crime.’ The current average of ‘six crimes a day’ on the subway does ‘not giving the impression that it is out of control,’ he said.

He admitted that there are ‘too many guns’ on the streets of New York, but added that the NYPD has done an ‘amazing job’ confiscating thousands of firearms.

Chicago police say up to fourteen people may have been shot nine critically injured...

Emily Ratajkowski is stylishly chic in a retro jacket as she enjoys a fall...

Aaron Carter, the child star who recorded his first album at NINE