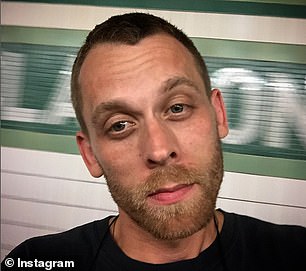 Daniel Auster, 44, was found dead on Tuesday from a suspected drug overdose

The 44-year-old son of novelist Paul Auster has been found dead of a drug overdose, nine days after his arrest for the manslaughter of his 10-month-old daughter Ruby.

Daniel Auster was discovered surrounded by drug paraphernalia, and the dosage was similar to what he usually took, The New York Post reported – suggesting his death was accidental.

He had been arrested on Easter Sunday for the November 1 death of Ruby. She died of a fentanyl overdose after he took heroin then went to take a nap with the child by his side.

His father, Paul Auster, 75, has won numerous international awards for his books, which include titles such as The New York Trilogy,’ ‘The Book of Illusions,’ and ‘Moon Palace.’ In 2017, he was nominated for the Booker Prize for his novel ‘4, 3, 2, 1’, and his work has been translated into more than forty languages.

In Auster’s 1995 film about the lives of people who frequented a Brooklyn tobacco shop, Smoke – which starred Harvey Keitel and William Hurt – Daniel played the role of a book thief.

His mother is author and translator Lydia Davis, 74.

Davis and Paul Auster divorced in 1978; in 1982, he remarried, tying the knot with author Siri Hustvedt, and the couple have one daughter together, musician Sophie Auster, 34. 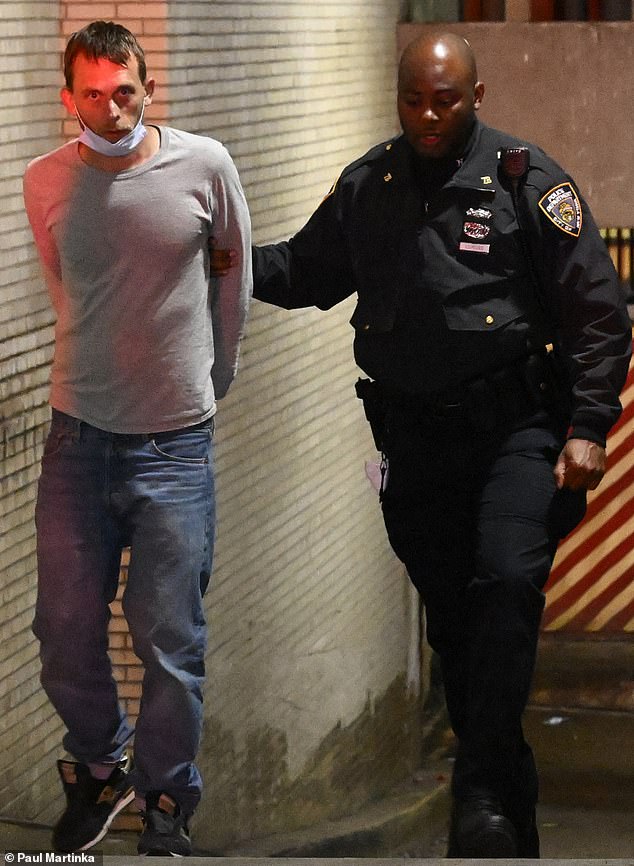 Daniel Auster, 44, was found dead on Tuesday. He admitted to doing heroin then falling asleep with his daughter in his care. When he awoke she had ingested enough drugs to ‘render and adult unconscious’ He was charged with manslaughter, child endangerment and criminally negligent homicide, and was awaiting trial when he died 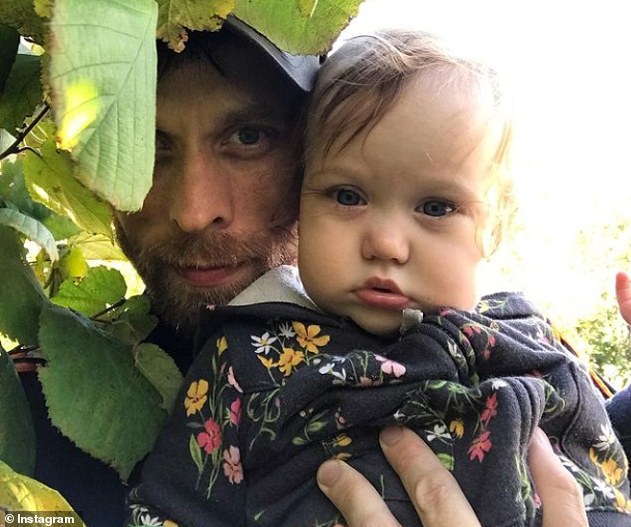 Daniel Auster’s daughter, Ruby (pictured above), was found lifeless in his Park Slope home on November 1 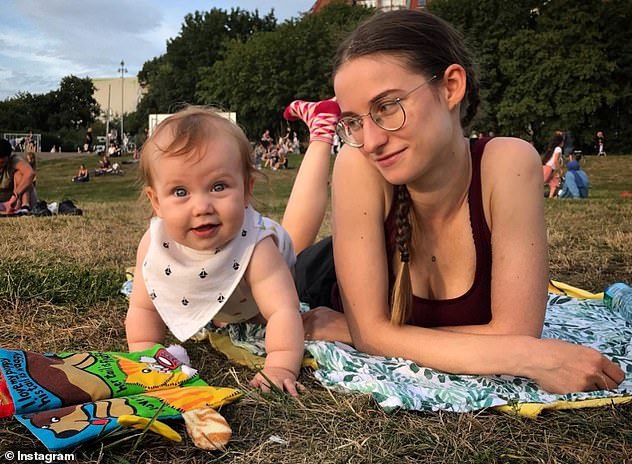 Daniel would regularly post photos of his wife and daughter, Ruby, before her death last year 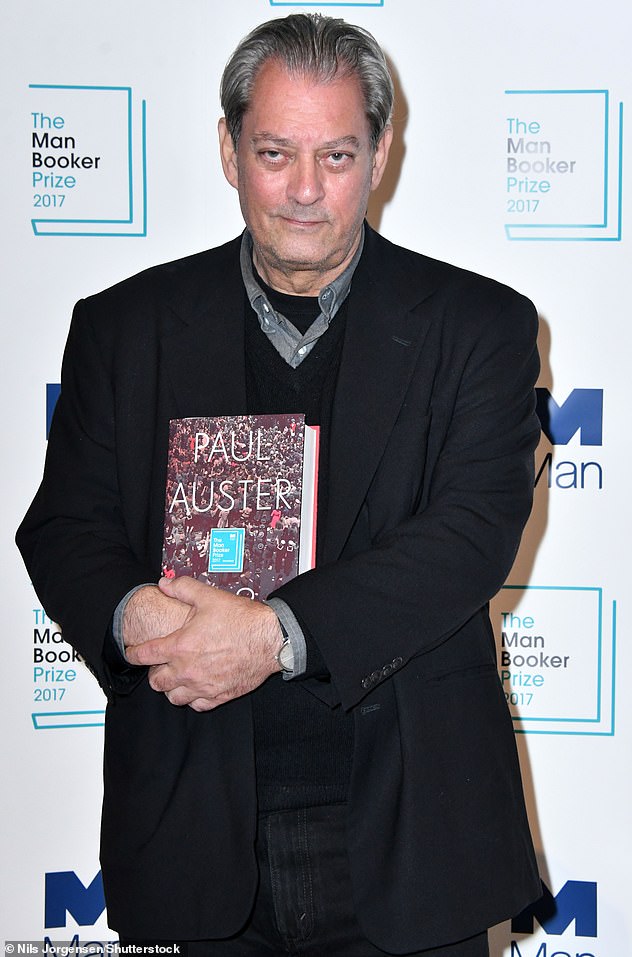 Daniel’s father, Paul Auster, is probably America’s best-known postmodern novelist – known for The New York Trilogy, The Book of Illusions and Moon Palace. The pair’s relationship appeared to be estranged

During his teenage years, Auster started going to clubs in New York City and became heavily involved with drugs, according to The New Yorker.

At the age of 18, in 1996, Auster was present in the apartment when a drug dealer, Andre ‘Angel’ Melendez, was murdered by ‘Club Kid Killer’ Michael Alig, a former nightclub promoter, and his roommate, Robert Riggs.

Auster was given $3,000 of Melendez’s money in exchange for his silence.

He later pleaded guilty to possession of stolen property and was given five years probation.

Auster had a string of arrests including several drug possession charges in 2008 and 2010.

In 2009 he was charged with petit larceny and possession of stolen property. 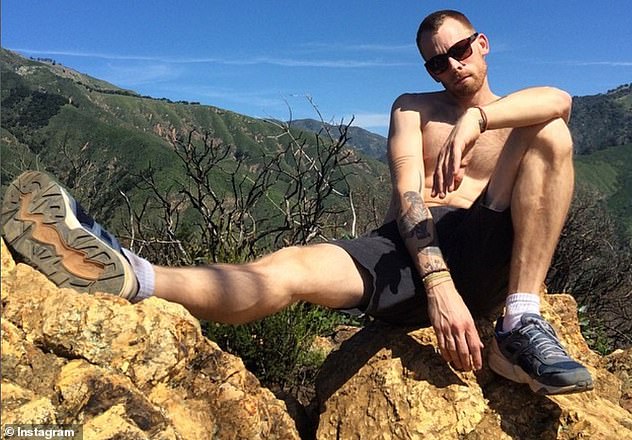 The troubled son of New York author Paul Auster, Daniel, was charged in relation to his infant daughter’s drug overdose death. On Tuesday he was found dead 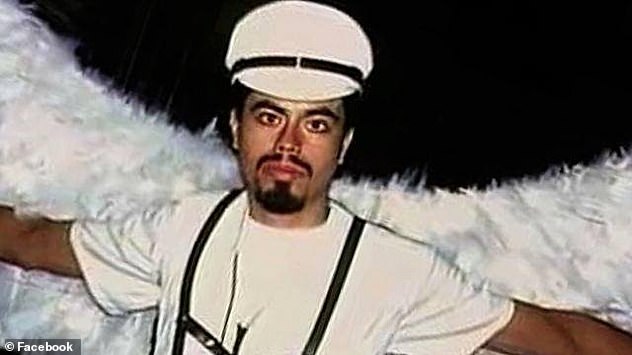 ‘Club Kid Killer’ Michael Alig, who was a former nightclub promoter, is pictured. In 1996, he murdered a drug dealer, Andre ‘Angel’ Melendez, in an apartment in which Auster was present. Auster was paid $3,000 to keep quiet, and was later given five years probation. Alig was found dead on Christmas Eve 2020 from an accidental heroin overdose, at the age of 54

Auster in April claimed his baby daughter died of a fentanyl overdose after he took heroin then went to take a nap with the child by his side while his wife worked, a court heard. 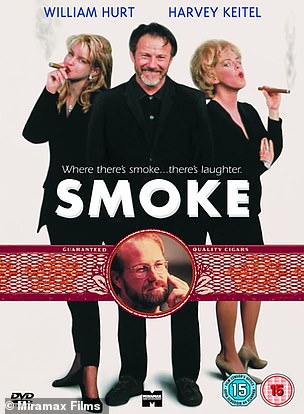 The vivid account allegedly given to the NYPD by Auster was shared by Assistant District Attorney Tien Tran said at his arraignment hearing on manslaughter charges.

The infant’s mother, Zuzan Smith, told police that their daughter, Ruby, was awake and alert when she left her in Auster’s care and went to work.

A criminal complaint obtained by DailyMail.com states that Auster told police that shortly after Smith left their home, he injected heroin and then got into bed for a nap with the child by his side.

When he woke up from his nap, she was ‘blue, lifeless and unresponsive’, the complaint states.

The prosecutor said that the girl had enough drugs in her system to ‘render an adult unconscious.’ 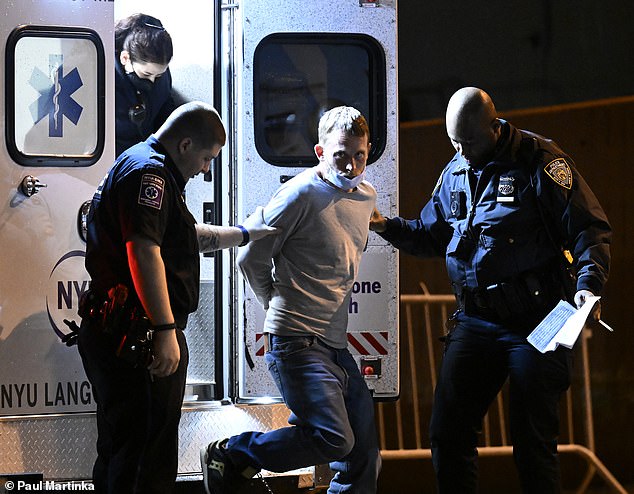 Auster, pictured here being led to court for his arraignment, gave the 10-month-old girl Narcan to revive her after he awoke to find her ‘blue, lifeless and unresponsive’ 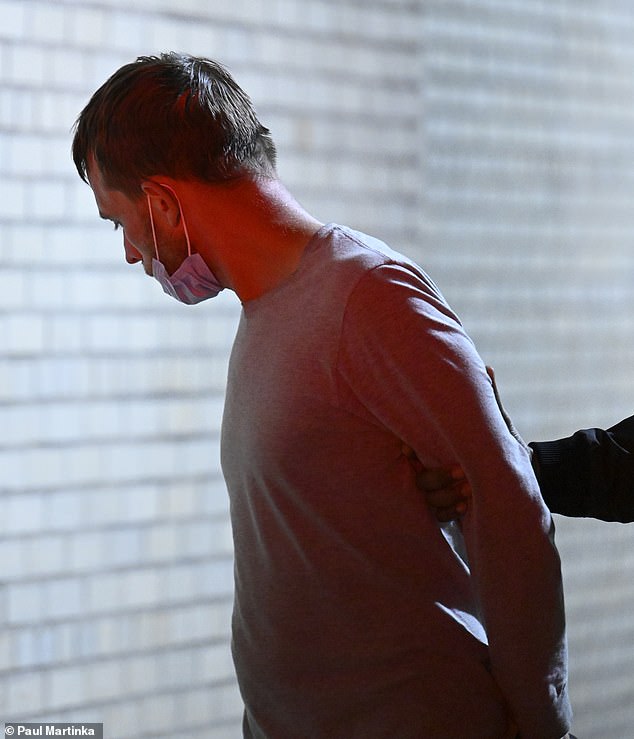 Auster, 44, refuses to face the cameras after he was charged with manslaughter, criminally negligent homicide and endangering the welfare of a child after his infant daughter ingested his heroin while he napped

It’s still unclear how the girl ingested the drugs, but Auster confessed that he kept heroin in his bathroom.

His lawyer, James Godfrey, told The New York Times that his client was recently sober and was in drug treatment.

‘This case is painfully tragic, and Mr Auster remains devastated over the loss of his beloved daughter Ruby,’ the lawyer told the paper.

‘Substance use disorder is an issue that countless families reel from each year, and we caution the public to refrain from making any rush to judgment.’ 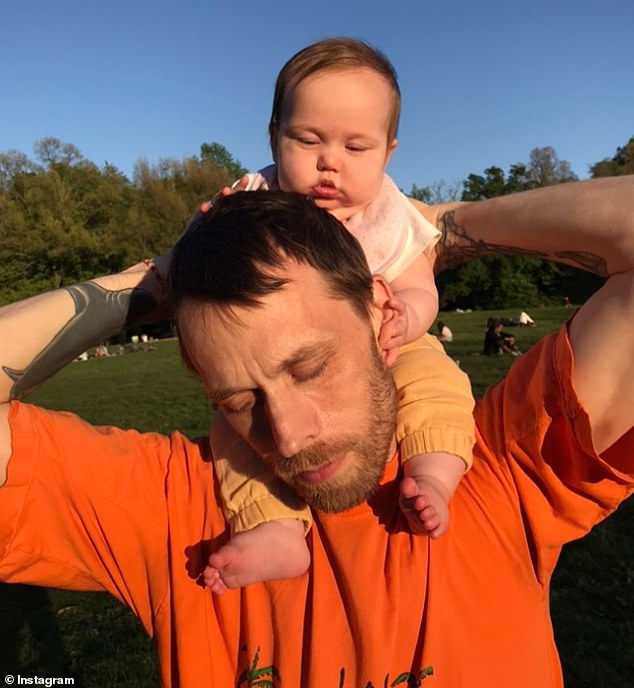 In many of the photos, Auster can be seen posing with his little girl, or cuddling her 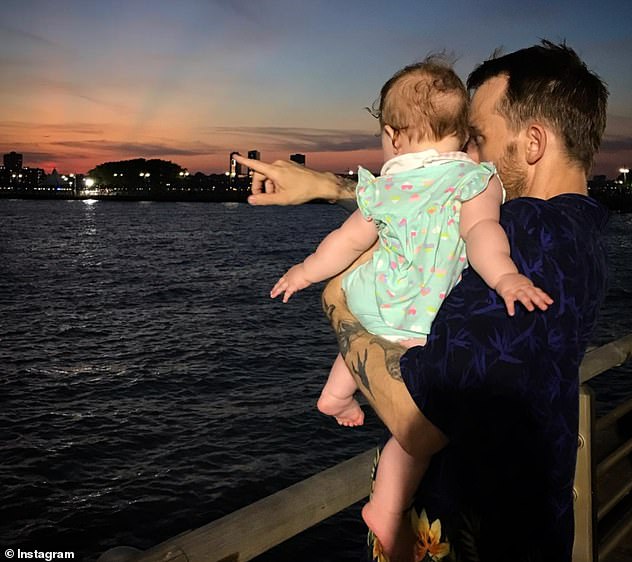 An autopsy conducted by the Office of the Chief Medical Examiner a few days later found Ruby died of acute intoxication caused by the combined effects of fentanyl and heroin.

Auster, who worked as a landscaper, posted photos of his child and Smith on his Instagram page before jetting off to Mexico and Columbia in January.

On his travels, he seemed to be backpacking like a college student, and taking in several raves. 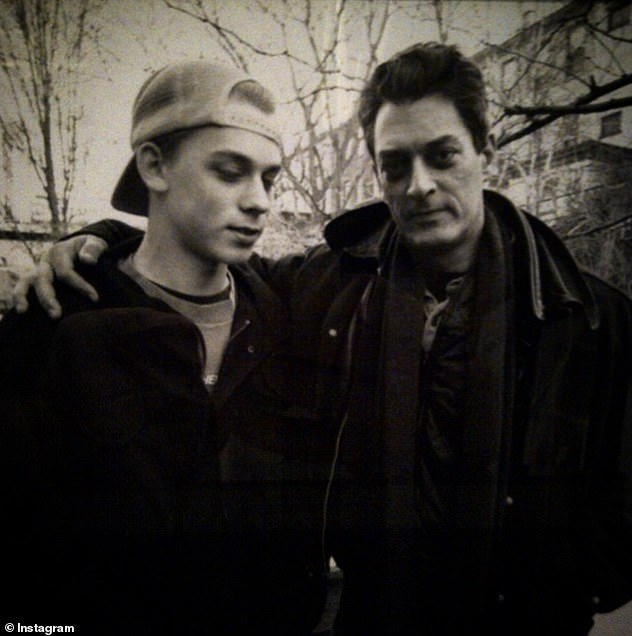 Daniel Auster is pictured in a photo with his father Paul, in a shot from his teenage years 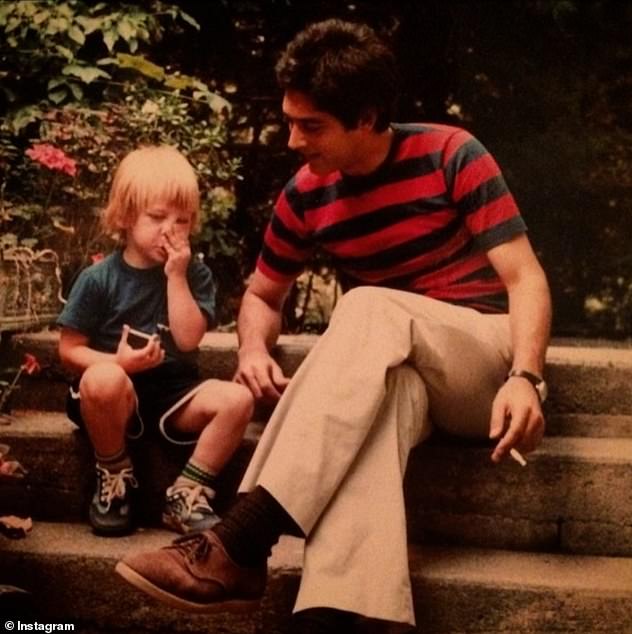 Daniel is pictured with his father as a young boy in a photo posted to his Instagram, entitled ‘Me and pops’ 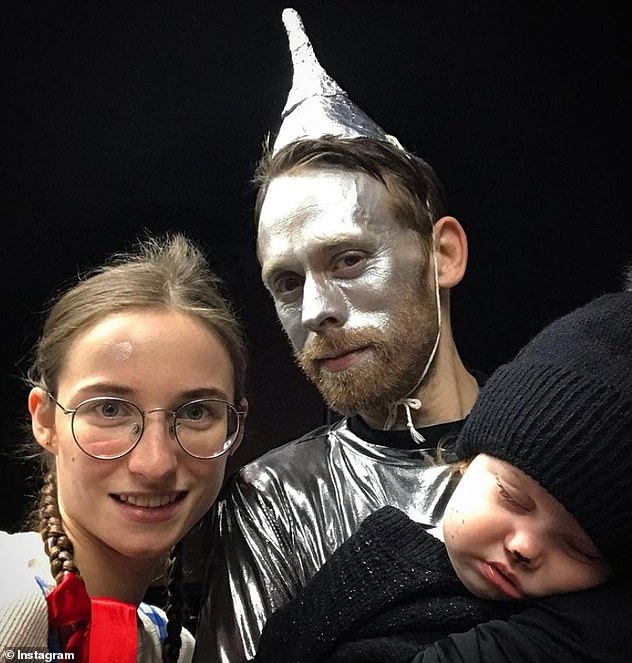 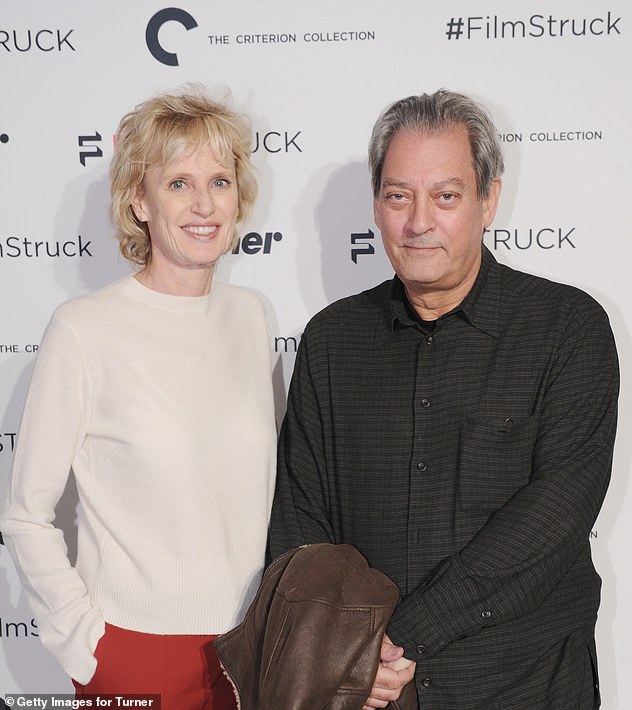 Paul Auster’s second wife Siri Hustvedt, left, who is also a writer, never speak about their stepson, Daniel. The pair are pictured in 2016

Auster and his father appeared to be estranged, but Auster wrote Daniel into his work.

In his 2004 novel, Oracle Night, the book is narrated by a writer called Trause whose son is a drug addict who terrorizes his stepmother.

During a 2006 Guardian interview, Paul Auster’s second wife Siri Hustvedt who is also a writer, declined to speak about her stepson.

‘Yes. You know, I’m not going to talk about any of that, no. No,’ she said, her eyes reportedly beginning to water.

‘You know, I am married to a writer, and this – writing – is an odd enterprise.

‘It’s something we both support very strongly.

‘I have a very strong family.’

Fleur East takes a nasty tumble as she exits car at the Pride of...