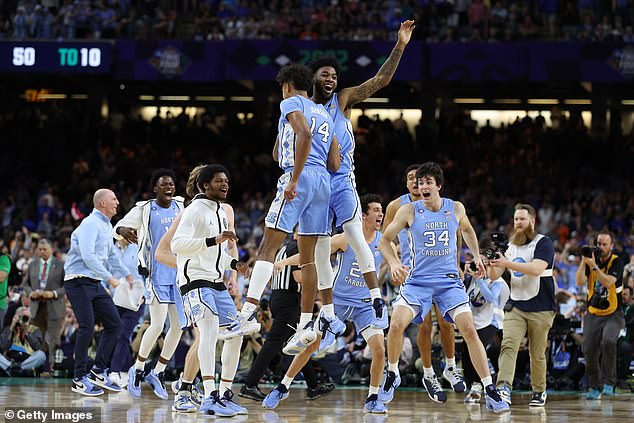 Head coach Mike Krzyzewski’s 42-year career at Duke came to a sudden end Saturday night, when the North Carolina Tar Heels eked out an 81-77 win against the Blue Devils.

In a thrilling down-to-the-minute game, North Carolina’s Caleb Love managed to score a key three-pointer, as well as three late free throws in the final 25 seconds of the game – depriving Krzyzewski of a sixth championship before he retired.

In total, Love managed to score 28 points and RJ Davis had 18 for the Tar Heels, who will now face the Kansas Jayhawks in the NCAA final Monday night, after they defeated Villanova earlier on Saturday.

But the first NCAA Tournament meeting between the unfriendly neighbors, the 100th game between the teams since Coach K’s arrival, was a classic between basketball heavyweights.

The two teams, which are famously separated by only a few miles on Tobacco Road, sparred for two hours, breaking 12 ties and trading the lead 18 times.

North Carolina eked out the Blue Devils during the semifinal round of the Men’s Final Four NCAA tournament on Saturday, beating the team 81 -77 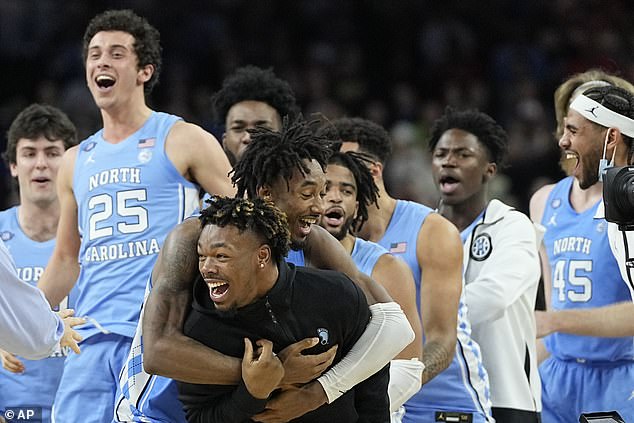 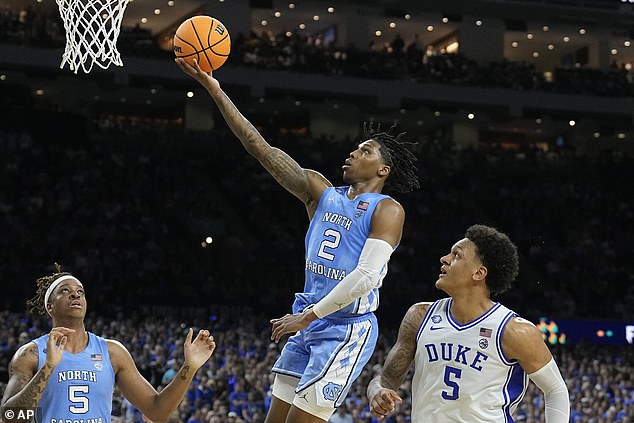 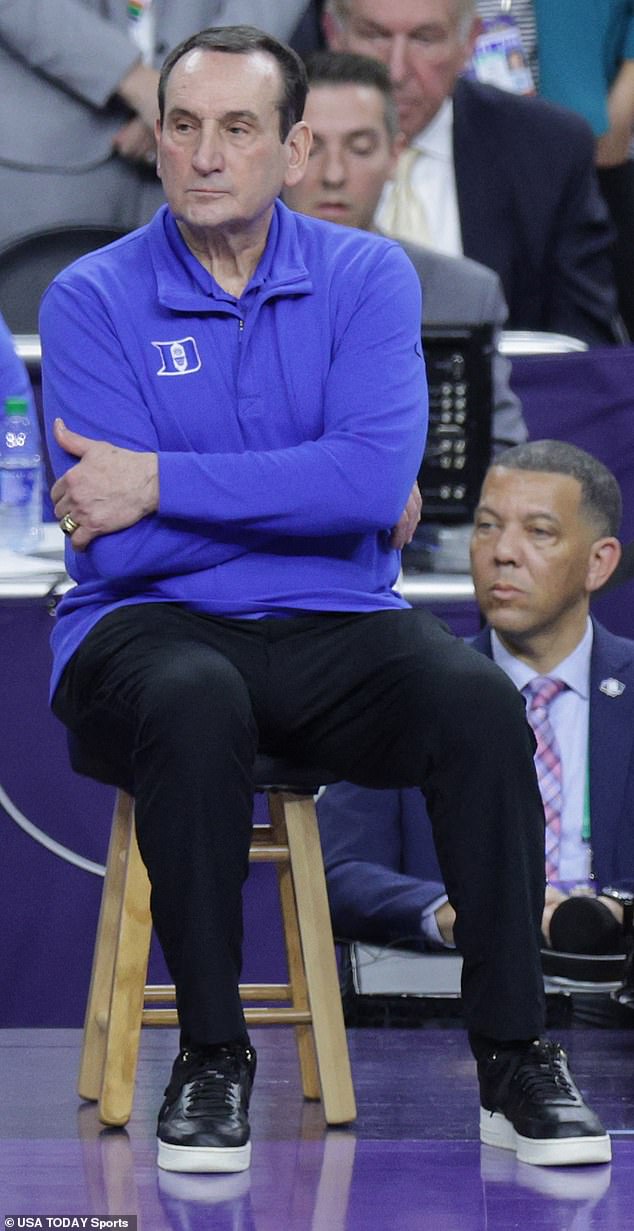 Duke started out Saturday night’s game strong, with center Mark Williams scoring a few dunks, but soon he picked up a couple of early fouls and sat on the bench for the rest of the first half.

The Tar Heels then managed to erase two different six-point deficits in the first half, before going down by seven in the early second.

But the game really seemed to turn around when Williams picked up his fourth foul, and Duke had to play the final 10 minutes of the game with each of its lead players one personal away from being disqualified.

North Carolina led 79-76 and called a timeout with 10.4 seconds left and Duke’s Trevor Keels headed to the free throw line. Keels made the first but his second hit the front iron and Love collected the rebound.

Love made a 3 moving to his left with 25 seconds on the clock and went to the free throw line after Keels sprinted for a layup to make the score 78-76. Love missed the second after making the first.

Down by two with 2:07 left, Keels knocked in an open 3, which was answered seconds later by Brady Manek in the corner in front of the UNC bench. But Duke’s Wendell Moore Jr. made one of his own at the other end, and Duke went into a timeout ahead 74-73 with 1:20 to go.

Duke went up 68-67 when Banchero made one of two free throws, but Love changed the lead for the 14th time in the game with a running layup off the glass, and North Carolina’s defensive stop ended with Manek at the line in the bonus. He made the first, for a 70-68 Tar Heels lead.

With the game even at 67, Manek missed an open 3 from the left wing two possessions after missing two free throws.

Griffin made the free throws that made it 67-65 Duke. The foul shots came moments after Armando Bacot left with 5:18 remaining, unable to put weight on his right leg. He returned to the game with 4:36 to go. 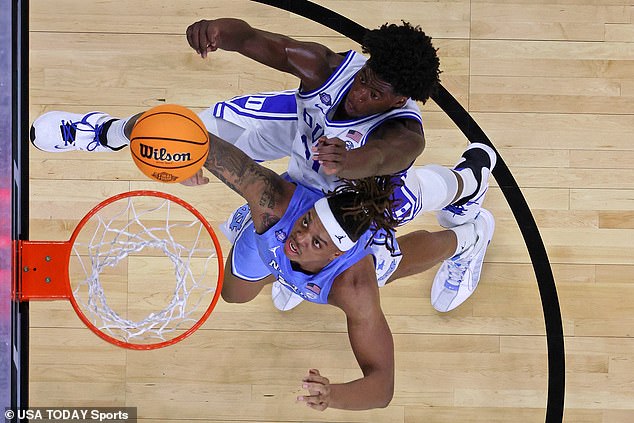 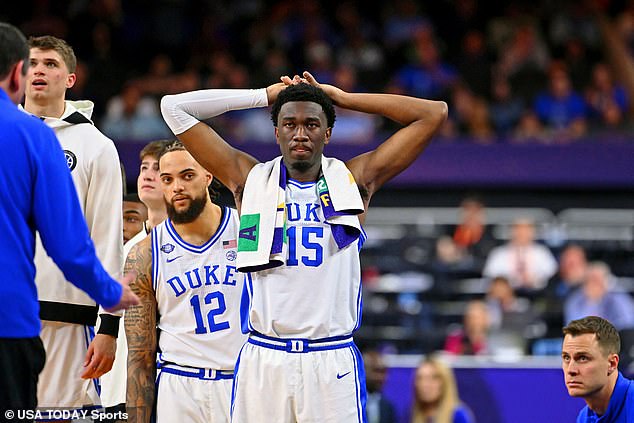 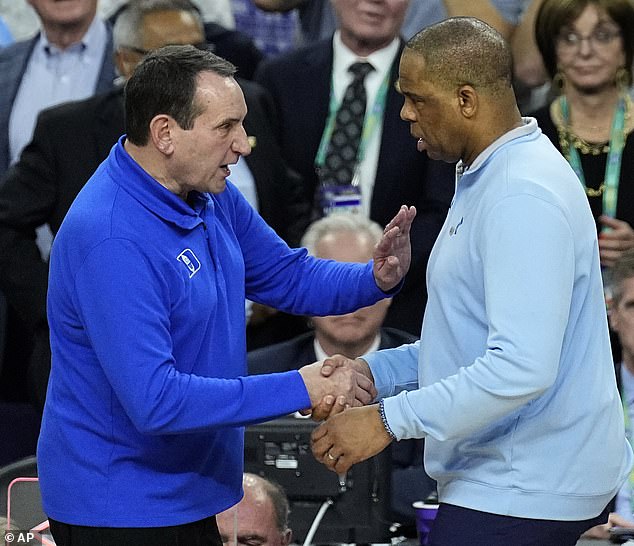 Duke continued to trail 62-57 at the under-8 timeout when Banchero spun left from the right block for an easy two, and Jeremy Roach went to the line the next trip to further narrow North Carolina’s edge to 62-61.

Keels cleaned up a missed layup to give the Blue Devils the lead back. After a sweeping layup by Love, Griffin drained a pair of free throws to nudge Duke ahead 65-64.

The Blue Devils went small for much of the second half. Williams picked up his fourth foul on an and-1 by Bacot with 10:31 left, and Duke was forced to go back to Theo John, who had four fouls in the first half.

By the time the final buzzer rang, Krzyzewski – the winningest coach in college basketball history walked calmly to half-court and shook the hand of Carolina’s rookie coach, Hubert Davis. He then walked hand-in-hand with his wife down a Superdome tunnel.

‘Whatever the last game is, you’re either crying for joy or you’re crying for sorrow,’ he told the NCAA moments later. ‘And if you are, that means you’ve put everything into it.

‘And I have a bunch of kids who are crying, and I’m proud of ’em. They’ve played winning basketball. And they did tonight too, but so did the other team.’

In total, Duke has had 1,202 wins and hundreds of Duke basketball graduates – some of whom have become NBA All Stars – under Coach K’s watch. 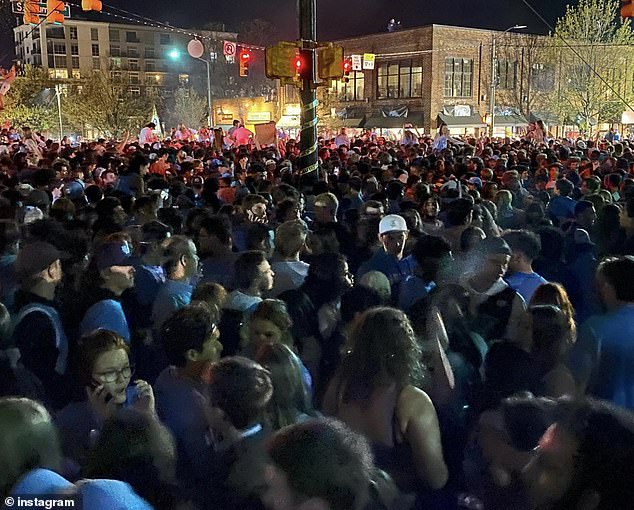 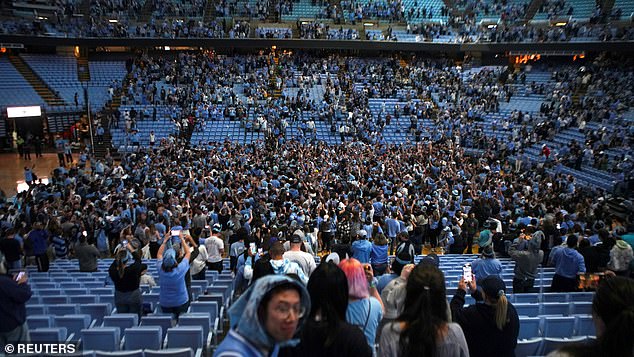 Inside the Dean Smith Center, fans poured onto the empty basketball court 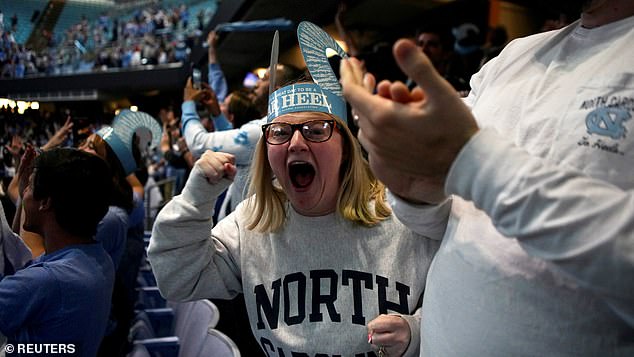 Fans were ecstatic about the win over their rival, the Duke Blue Devils 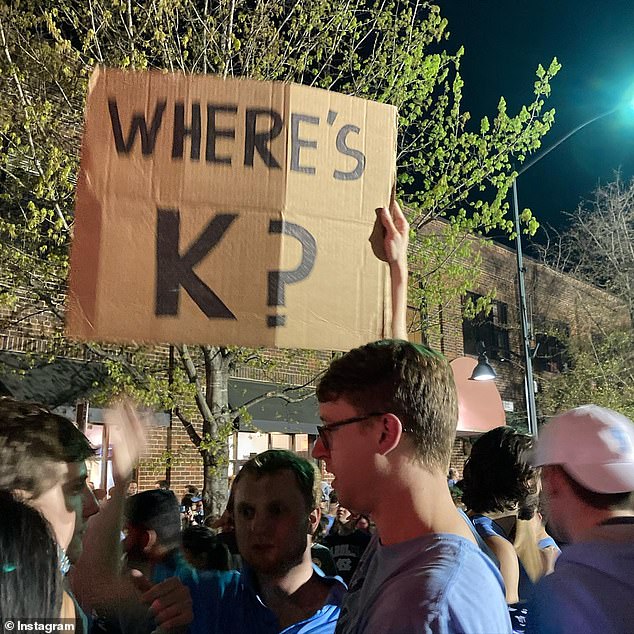 Meanwhile, back in Chapel Hill, UNC Tar Heels fans began pouring out of bars and restaurants and onto Franklin Street when it became clear their team was going to the finals.

A bonfire was soon burning in the middle of the intersection of Franklin and Columbia streets as thousands crowded around, according to the Raleigh News and Observer, while others shot off fireworks.

And inside the Dean E. Smith Center on campus, where thousands of college students had watched the game on big screens, people stormed the empty basketball court, jumping and screaming as if the game had taken place right in front of them.

‘It’s really exhilarating and amazing,’ said sophomore Christine Mendoza, ‘and I think it just highlights the community and the bond we all have as Tar Heels.’

North Carolina will now face Kansas for the title on Monday.

Boris Johnson hints that Home Secretary could be removed in reshuffle

Love Island’s Amber Beckford has a famous ex-boyfriend and she may discuss ihimn the...