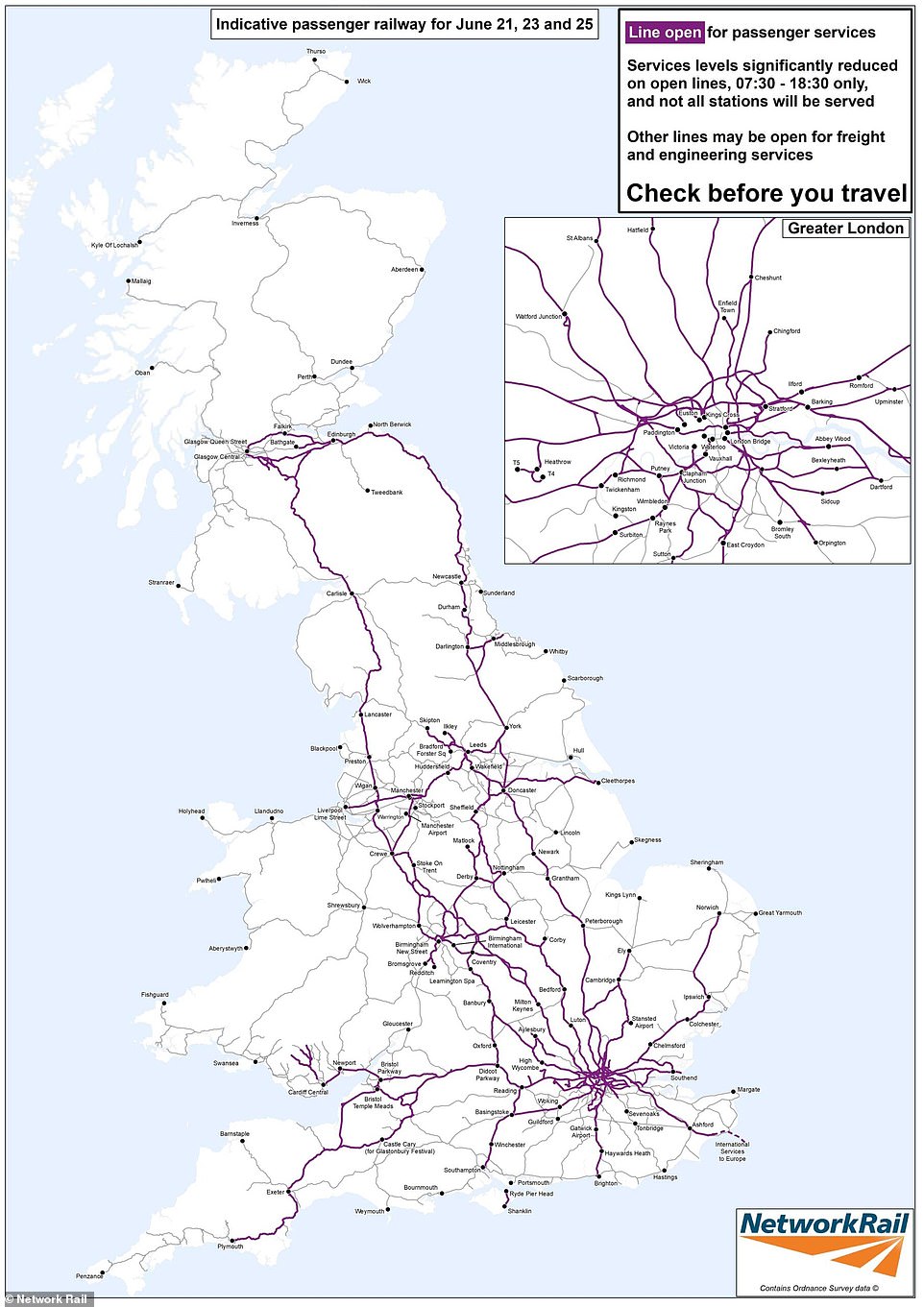 Rail bosses today revealed a map showing how only around half of Britain’s train network will be open on strike days next week – with a very limited service running on lines that are open from around 7.30am until 6.30pm.

Members of the Rail, Maritime and Transport (RMT) union at Network Rail and 13 train operators are to walk out next Tuesday, Thursday and Saturday, which will also cause huge disruption to services on Wednesday and Friday.

As millions of Britons now face the prospect of having no choice but to work from home next week, the RMT and Unite will also be striking on London Underground next Tuesday in a separate row over jobs and pay.

Network Rail said no passenger services will serve locations such as Penzance in Cornwall, Bournemouth in Dorset, Swansea in South Wales, Holyhead in North Wales, Chester in Cheshire and Blackpool, Lancashire.

There will also be no passenger trains running north from Glasgow or Edinburgh. The number of passenger services on the three strike days is expected to be limited to around 4,500 compared with 20,000 normally.

Open lines include the West Coast Main Line from London to Scotland via locations such as Birmingham and Manchester – although the last train from Edinburgh to London on the East Coast Main Line will be at 1.30pm.

While operators such as Southeastern and Northern have issued a ‘do not travel’ warning, Network Rail said: ‘Passengers asked to plan ahead, check before they travel, to expect disruption and only travel if necessary.’

Rail bosses said finishing touches are now being made to a special timetable, which will be published on Friday and be in operation across England, Scotland and Wales from Monday, June 20 to Sunday, June 26 inclusive.

Network Rail said chief are aiming to ‘offer the best service possible for passengers and freight users despite the unwarranted industrial action’, with ‘thousands of specially trained and fully qualified back-up staff’ stepping in.

This map shows the planned rail services on June 21, June 23 and June 25 as the RMT strike causes chaos across Britain 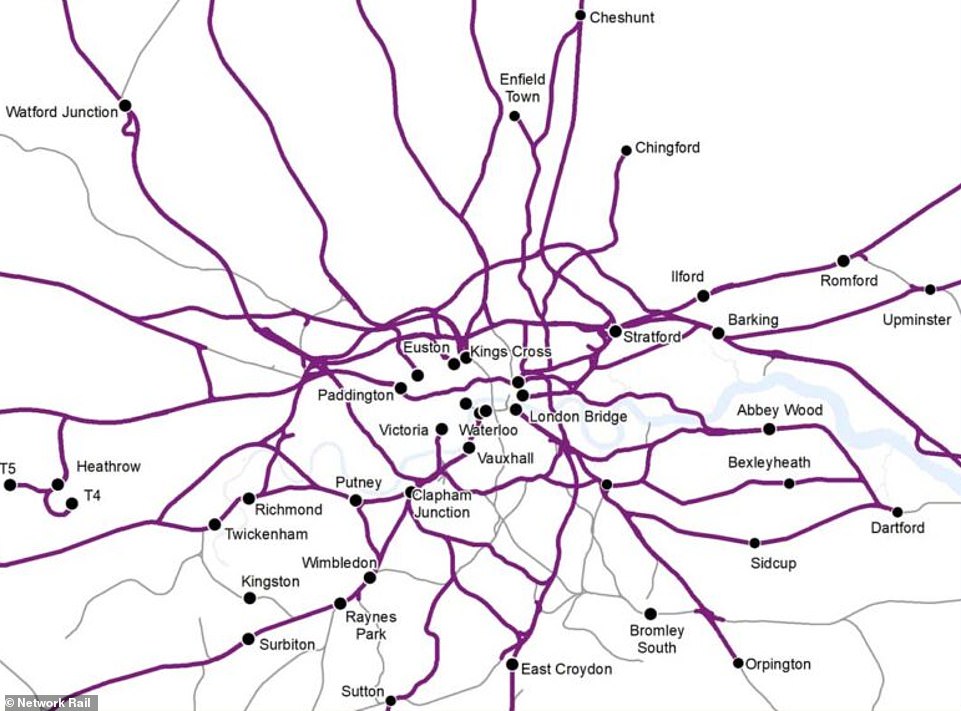 This close-up map of London shows the lines which are expected to operate in and out of the capital on June 21, 23 and 25

Network Rail chief executive Andrew Haines said: ‘Talks have not progressed as far as I had hoped and so we must prepare for a needless national rail strike and the damaging impact it will have.

‘We, and our train operating colleagues, are gearing up to run the best service we can for passengers and freight users next week despite the actions of the RMT.’

Network Rail said that on the three days that follow the strikes – Wednesday, June 22; Friday, June 24; and Sunday, June 26 – the ‘whole network will reopen but passengers should also expect disruption on these days’.

Bosses said this was because the ‘strike days chosen have been designed to inflict as much disruption as possible, with not enough time between the strike days to fully recover to a normal service’.

They added that the special timetable ‘will also ensure key freight services can continue to move around the country, minimising disruption for consumers and businesses and allowing vital goods to continue to be shipped where needed’.

Steve Montgomery, chair of the Rail Delivery Group, said: ‘These strikes will affect the millions of people who use the train each day, including key workers, students with exams, those who cannot work from home, holidaymakers and those attending important business and leisure events.

‘Working with Network Rail, our plan is to keep as many services running as possible, but significant disruption will be inevitable and some parts of the network will not have a service, so passengers should plan their journeys carefully and check their train times.

‘Taxpayers have provided the equivalent of about £600 per household since covid and passenger numbers are still only at around 75 per cent of pre pandemic levels. We need to bring rail up to date so that we attract more people back and take no more than our fair share from the public purse.

‘We ask the RMT’s leadership to call off these damaging strikes and continue talks to reach a deal that is fair to staff and taxpayers, and which secures a bright, long-term future of our railways.’

Rail bosses also confirmed that all train operators are affected by the strike – whether they have an individual dispute with the RMT or not – because Network Rail’s signallers control train movements across all of Britain.

Network Rail added: ‘Although the network will only be open from 7.30am to 6.30pm on strike days, electricity to tracks and overhead lines will stay on throughout, as will patrolling by security staff, police and from the air.’

It comes after a war of words erupted between unions and the Government ahead of next week’s rail strikes after Downing Street accused unions of moving to industrial action without proper negotiations.

The Prime Minister’s official spokesman rejected claims the Government could be doing more to prevent the transport chaos facing commuters.

The spokesman said Transport Secretary Grant Shapps has been ‘speaking to railway leaders, to Network Rail and to other groups throughout’.

He added: ‘But, fundamentally, obviously it’s for unions to have these negotiations with groups like Network Rail. It is our firm view that unions are skipping over a step, they’re not negotiating, they are moving straight to strike action.’

But union leaders hit back, accusing the Prime Minister of ‘turning his back’ on talks.

Transport Salaried Staffs Association (TSSA) general secretary Manuel Cortes said he wrote to Boris Johnson in May saying he was prepared to hold discussions with the Prime Minister.

Mr Cortes said: ‘These are just hollow words from the top of Government, with Johnson now clearly turning his back on talks and happy to face a summer of discontent on our railways.

‘Instead of sitting down with us and seeking to solve this dispute, Johnson and his Ministers have been doing all they can to undermine any prospect of a negotiated settlement.

‘While Grant Shapps and others claim there’s no money for our members, they have instructed management at Network Rail to throw endless pots of money at bribes aimed at attempting to break strikes.

‘They have also floated the crazy plan to bring in temporary workers during industrial action, something which would seriously endanger safety on our railways.

‘Meanwhile, the Department for Transport has the cheek to give the impression that talks with our union are just beginning when they know it’s total nonsense.

‘Instead of peddling untruths, the Government would be better served by actually getting their hands dirty in discussions to secure a proper pay deal and job security for thousands of rail workers who were heroes in the pandemic.’

The Number 10 spokesman added that the Government ‘is doing everything possible to encourage unions to step back from the precipice of this and we want the negotiations to proceed’.

Giving an official update on the meeting, the Prime Minister’s official spokesman told reporters: ‘The Transport Secretary said the Government would remain on the side of the public, adding that strikes would also be bad for rail workers as it risked driving away customers when numbers were already down since the pandemic.

‘He said the strikes also risk disrupting exams at a time when schoolchildren had already had their education significantly affected during the pandemic.’

Yesterday, it emerged the TSSA had served notice to ballot more than 6,000 staff at Network Rail  in a dispute over pay, conditions and job security.

TSSA is demanding a guarantee of no compulsory redundancies for 2022, no unagreed changes to terms and conditions, and a pay increase which reflects the rising cost of living.

The union said Network Rail staff last had a pay rise between two and three years ago (it varies between grades) and also worked throughout the coronavirus pandemic as key workers.

Members are being asked to cast two votes: one on strike action and another on action short of a strike. The ballot opens on June 20 and closes on July 11. In the event of a yes vote, strike action could be held from July 25.

Mr Cortes said: ‘We could be seeing a summer of discontent across our railways if Network Rail don’t see sense and come to the table to face the concerns of their staff.

‘Network Rail staff are asking for basic fair treatment – not to be sacked from their jobs, a fair pay rise in the face of a cost-of-living crisis and no race to the bottom on terms and conditions.

‘Fat cat bosses have so far refused these completely reasonable requests, leaving us with no option other than to ballot for industrial action, something which is always a last resort.

‘It’s frankly ridiculous that we’re being forced to ballot. Network Rail only responded to our requests for pay talks – made before Christmas – when we moved the issue to dispute in April and have dragged their heels at every stage.

‘Our members have had enough. We are preparing for all options, including co-ordinated strike action.’

A Network Rail spokesman said: ‘Now is not for time for the TSSA to be jumping on the RMT ‘strike bandwagon’.

‘Positive pay talks were in full swing with a ‘no-strings’ pay offer of 2.5% on the table, with the potential for more if connected to productivity and efficiency gains, so this news is both premature and deeply disappointing.’

A Department for Transport spokesman said: ‘Strikes should always be the last resort, not the first, so it is hugely disappointing and premature that the TSSA is balloting for industrial action when talks have only just begun.

‘Taxpayers across the country contributed £16 billion, or £600 per household, to keep our railways running throughout the pandemic.

‘The railway is still on financial life support, with passenger numbers 25% down and anything that drives away even more of them puts services and jobs at risk.

‘Train travel for millions more people is now a choice, not a necessity. Strikes stop our customers choosing rail, and they might never return.

‘We urge the TSSA to reconsider and come to industry talks, so we can find a solution that delivers for workers, passengers and taxpayers alike.’

Talks between Network Rail and the TSSA will be held tomorrow in a bid to agree a pay deal. Network Rail said it remains committed to progressing talks with the union to implement reforms to management.

Sources said that, through natural attrition and uptake on voluntary severance, strong progress has been made on management modernisation to date.

Replying to a claim by Mr Cortes that Grant Shapps and others have instructed management at Network Rail to throw ‘endless pots of money’ at bribes aimed at attempting to break strikes, a DfT spokesman said: ‘This is wholly false. Government has made no such instruction and it’s wrong to imply as such.

‘We encourage unions to call off these strikes and return to the negotiating table, there’s no doubt that the strikes next week will come at a massive cost to the country and to the railways – just when the railways are facing the biggest challenge in their 200-year history.’

Tristan Thompson takes on double daddy duties as he carries daughter True and her...

British couple’s dream holiday in Canada ends in ‘nightmare’ after they are ordered off...

Catherine Tyldesley puts on a busty display in gingham dress and discusses breastfeeding in...