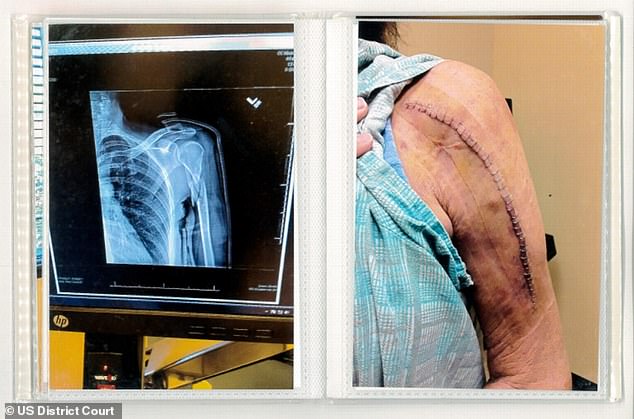 A North Carolina woman is suing the cop who broke her arm after he attempted to arrest her for failing to show her license.

Cindy Gardner, 51, of Mooresville, is suing Sergeant Russell Clark after he allegedly pulled her out of her apartment and threw her to the ground, breaking her arm as he handcuffed her on April 8, 2020, the Charlotte Observer reported. Clark is decorated sergeant and was credited with saving two lives in 2021 and was awarded Officer of the Year from the department in 2020.

She called the Mooresville Police Department around 9.15pm to make a noise complaint. When Clark showed up at her door and Gardner asked him if the town had a curfew, he told her ‘no’ and reportedly walked back to his patrol car.

When she followed him, she allegedly asked him to enforce the community rule of quiet time after 10pm, but he ‘rudely refused the request,’ the lawsuit, viewed by the Charlotte Observer, said. When Gardner made the request, it was before 10pm.

He returned to her door around 9.30pm and demanded her license after a female bystander told the officers that the older woman had ‘kicked them.’ That female bystander was among a group of people around Gardner’s door.

Cindy Gardner, 51, of Mooresville, is suing Sergeant Russell Clark after she had to undergo surgery and receive more than 30 stitches (pictured) in her arm. She claimed that Clark broke her arm and left it permanently damaged after he forcibly threw her to the ground and handcuffed her after she called to make a noise complaint

Gardner denied the accusation, but Clark demanded her license. She refused and invited him inside her apartment to talk, but he reportedly responded by yelling at her to bring him her ID, the Charlotte Observer reported.

Gardner refused and reportedly lit a cigarette before trying to ‘engage in a civil conversation’ about how she was ‘tired of all the noise.’

Shortly into the conversation, Clark allegedly demanded to see her license and threated to take her to jail if she refused, according to the lawsuit.

Gardner, who only stands at five-foot-three and weighs 105 pounds, said the officer turned violent after she failed to produce her driver’s license to him and began handcuffing her. Gardner claimed she didn’t try to resist him and her alleged crime did not involve threats or violent behavior toward an officer. 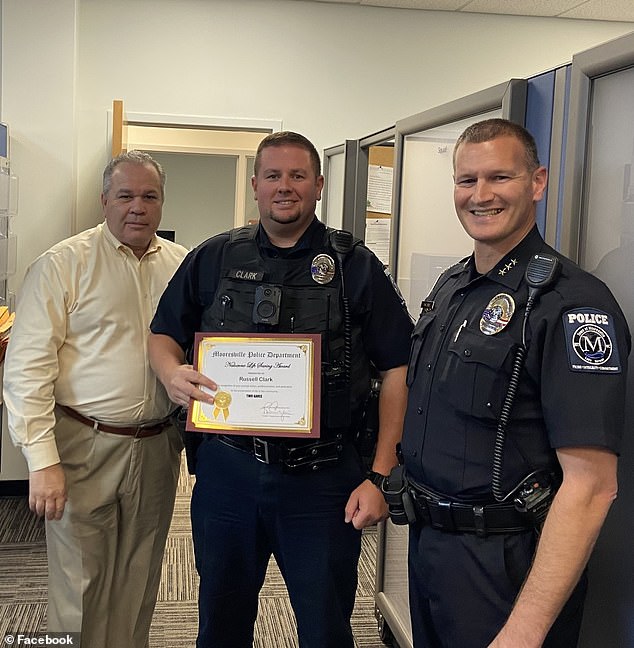 Russell (middle) reportedly became aggressive toward the 51-year-old on April 8, 2020, after she reportedly failed to give him her ID

She said Clark handcuffed her with ‘such aggression and force’ that he dislocated her shoulder and broke a bone in her upper arm. She was taken to the patrol car where Clark allegedly instructed another officer to take her to the hospital, but an EMS unit was never called to the scene.

She is now accusing the police officer of using ‘unreasonable’ force after her left arm was permanently damaged and required surgery, leaving her with more than 30 stitches and a scar leading from her left collarbone to a few inches above her elbow.

Gardner is also claiming her constitutional rights were also violated under the 14th Amendment for unreasonable search and seizure and due process under the law.

Gardner is expected to face a court hearing on April 18 for a misdemeanor charge of resisting an officer. DailyMail.com has attempted to contact Gardner’s lawyer, but has not received a response.

This isn’t the only controversy Mooresville police officers have found themselves in.  In 2021, a Charlotte driver sued an officer for smashing her windowing with a baton during a 2018 traffic stop. The driver claimed the officer then pulled her out through the broken window after she was having trouble giving him her registration card.

In December of last year, a Mooresville resident claimed two officers fatal shot her husband outside of their home after he reportedly tried to get on the ground, as requested, and to drop his weapon. Police claim that he threatened to kill himself and they were cleared of any wrongdoing. A trial in the case is expected to start in March of next year.

The Walking Dead star Norman Reedus gives a thumbs up to fans at promo...

Boy, 13, wins award after protecting siblings as his father was stabbed to death...