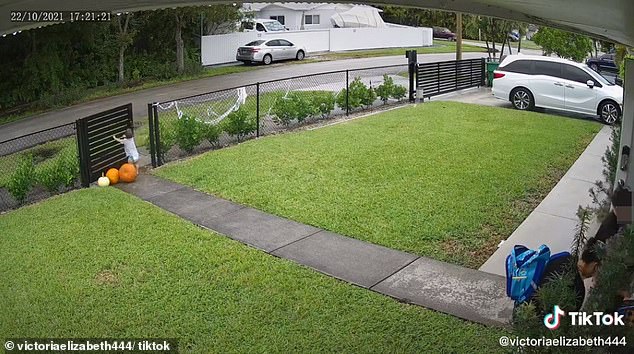 The warning ALL parents need to see: The terrifying moment toddler escapes backyard while his mum’s back is turned and races towards a busy intersection – and you won’t believe how far he gets

A young mother of three young boys has shared a shocking video of her toddler escaping their front yard and walking toward a busy highway within seconds of turning her back.

Victoria, who shared the footage on her TikTok on Sunday, had barely turned her back when her youngest son was toddling toward the street.

‘The scariest moment of my life. Grateful he is fine. Kids are so fast!’ She captioned the horrifying incident.

Victoria was returning home with her sons from what appears to be a regular day of school, stopping to fiddle with the keys at the front door.

Victoria, who shared the footage on her TikTok on Sunday, had barely turned her back when her youngest son was toddling toward the street

As she was trying to open it up, two of her sons standing by her side, the third takes the opportunity to make a run for it, pushing open a gate that was unlocked and walking down the path.

He continues to move at pace while Victoria twists and turns the key in the lock, all the while believing he was right by her side with the other boys.

After 33 seconds she has opened the fastening and is moving inside, when she realises one of her children is missing.

In an instant she is standing at the door again and spots her young son walking directly towards oncoming traffic.

She takes off, throwing her sons’ schoolbag to the ground as she races toward him, stopping the young boy just as he reaches the intersection.

‘I just held him and cried. I thought the gate was closed,’ she said. 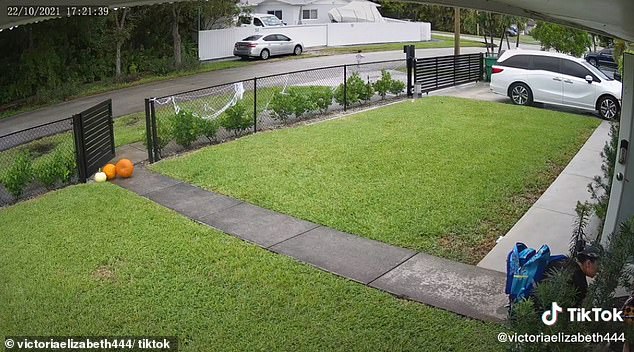 She takes off, throwing her sons’ schoolbag to the ground as she races toward him, stopping the young boy just as he reaches the intersection

Thousands of parents replied to the video with many saying it only takes an instant for a tragedy to occur.

‘He got so far, so fast! It only takes an instant,’ one woman said.

Is it the mother’s fault her young son got outside of the front gate?

But others were less than impressed by how long it took the mother to turn around and notice something was wrong.

‘No, they are not fast. You’re just not paying attention,’ one man replied.

‘It took mum wayyyy too long to look back and check up on baby,’ said another.

A third added: ‘She was so worried about putting everything else inside the house but the toddler’.

A group of parents came to her defence online saying that similar incidents had happened to them.

‘Most of these parents not watching their kids to criticise a stranger on TikTok too,’ one woman replied.

Another said: ‘All the perfect parent commentary…. Half of these people don’t even have kids! So glad he is safe, mama. Could happen to anyone.’

Fans left stuck outside the Stade de France for the second time in less...

Bruce Lee ‘may have died from drinking too much WATER’

Khabane Lame, 22, has become the most followed TikTok star in the world with...