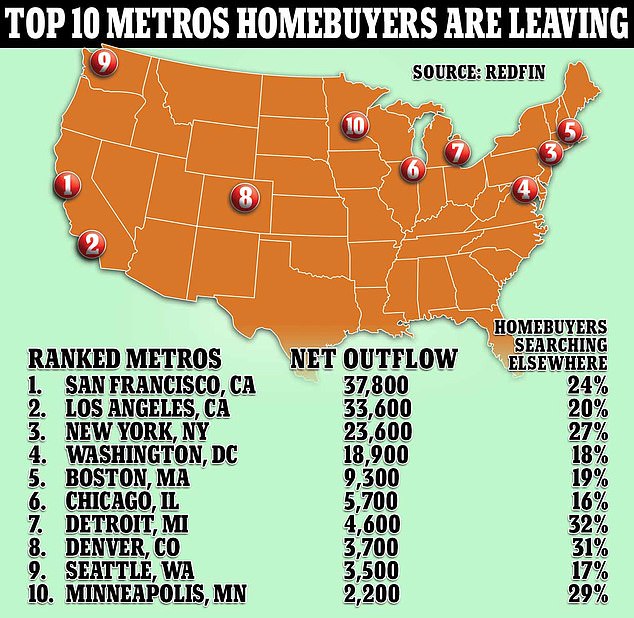 More than 20 percent of homebuyers living in New York City, San Francisco and Los Angeles are looking to escape the Dem-led, crime-ridden cities.

A new Redfin migration report shows that about 9,072 homebuyers in San Francisco are looking to move to either Sacramento, California, and Seattle.

In LA, about 6,720 homebuyer are looking for homes in San Diego and Las Vegas, and in New York City, 6,372 home shoppers hope to ditch the Big Apple for Miami.

The Dem-led cities, which have all seen a spike in violent crime this year, are leading the latest exodus as Redfin reports nearly 24 percent of homebuyers in the US are looking to leave big cities amid the cost of living crisis.

The report also shows that Sacramento enjoyed the most new residents moving in during the third fiscal quarter, gaining about 8,700 new homeowners.

Miami followed with a net inflow of 8,000 people, with Las Vegas coming in third with 7,000 new homeowners.

The latest report backs up the findings from the American Housing Survey, which found that Dem-led cities made up the majority of the top 15 metropolitans areas residents were moving away from.

More than 20 percent of homebuyer are looking to flee San Francisco, Los Angeles and New York amid a rise in violent crime and the high cost of living 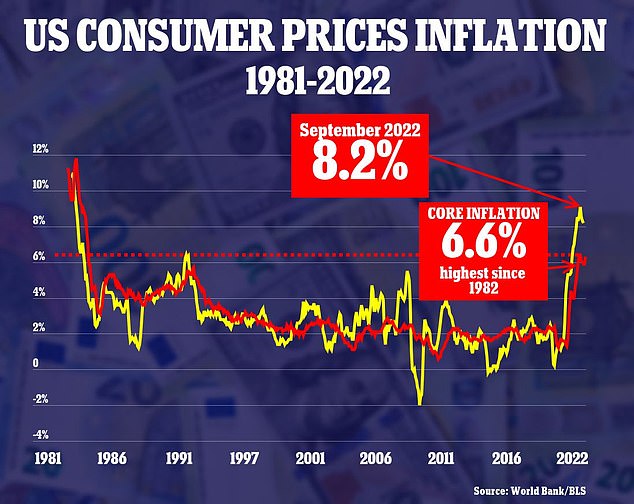 Core inflation, which excludes volatile food and energy costs, rose by its highest level in 40 years

‘With a recession looming and household expenses high, many people can’t afford to buy a home in an expensive area and/or want to save money in case of an emergency, which makes relocating somewhere more affordable an attractive option,’ Zhao said.

Sacramento real estate agent Samantha Rahman, said that the city’s popularity is evident as more than half of her clients are from outside the city.

‘They’re mostly remote workers coming from the Bay Area who may need to commute to the office a few times a month but are saving significantly on housing costs,’ Rahman noted .

‘It makes even more sense to relocate to a more affordable region now than it did when mortgage rates were low, as lower-priced homes offset some of the expense of high rates and rack up less interest.’

The same pattern can be seen with the LA residents moving out to Las Vegas, where the median housing price is about $404,000, less than half of LA’s.

And the residents who fled New York, where a home typically goes for $680,000, are also seeing big savings in Miami, where the median housing price is $475,000.

In Redfin’s latest migration trend report, along with San Francisco, LA, and NYC, the other cities losing out on residents were Washington D.C., Boston, Chicago, Detroit, Denver, Seattle and Minneapolis.

Zhao noted that the surge of people moving out of the big cities will likely come to an end soon once the forecasted recession hits.

‘Migration will likely slow in the coming months because the softening labor market and job loses will push more people to stay put or move in with family, though some may need to relocate for new employment opportunities,’ he said. ‘Plus, many remote workers who wanted to relocate already have.’ 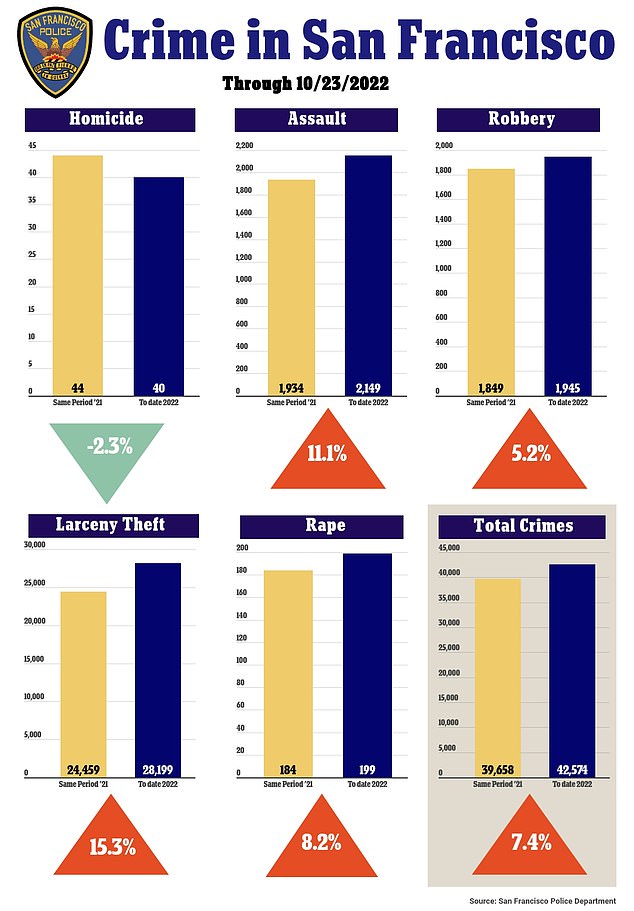 Major crimes in San Francisco are up 7.4 percent so far this year from the same period in 2021 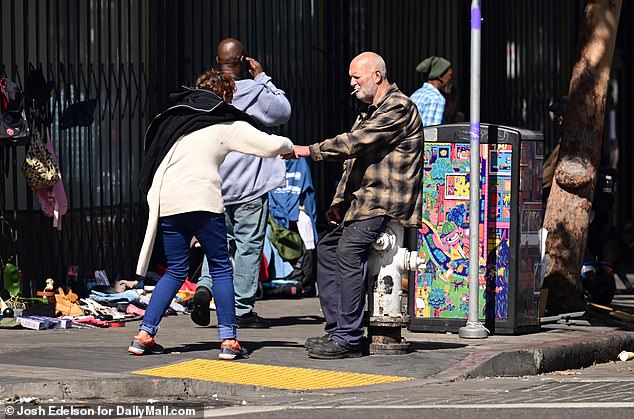 San Franciscans in the SoMa neighborhood have taken to carrying around defensive weapons after a drug ‘sobering’ clinic moved into the neighborhood. Pictured: Homeless people are seen in San Francisco in July 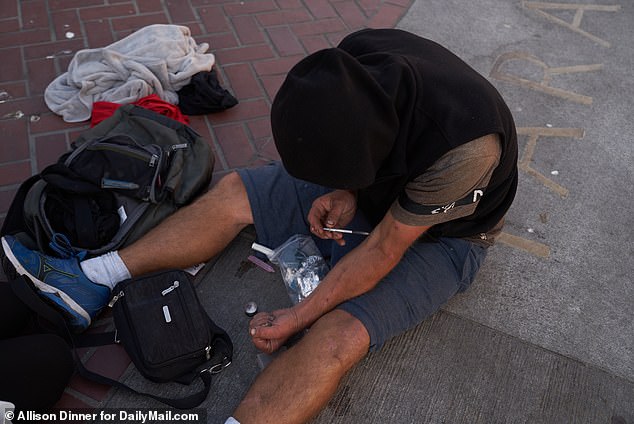 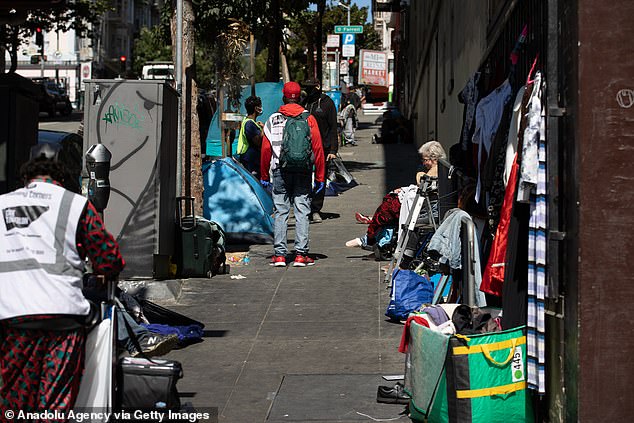 Coupled with the high cost of living, as inflation remains stubbornly high at 8.2 percent, the three cities losing out on the most homebuyers are also experiencing a surge in violent crime.

Major crimes in San Francisco are up 7.4 percent so far this year from the same period in 2021, with assault up 11.1 percent and robbery up 5.2 percent.

Crime in the city entered the national spotlight once again following the assault on Paul Pelosi, husband of US House Speaker Nancy Pelosi, in their $6 million home.

Amid scenes of misery on city streets, where drug use is brazen and homelessness is rampant, a recent poll found that a majority of San Franciscans believe their city is going down hill, and a third plan to leave the city within three years.

Some residents blame Mayor London Breed, whose earlier popularity for steering the city through the pandemic appears to have waned amid rising crime, the fentanyl epidemic and other woes. 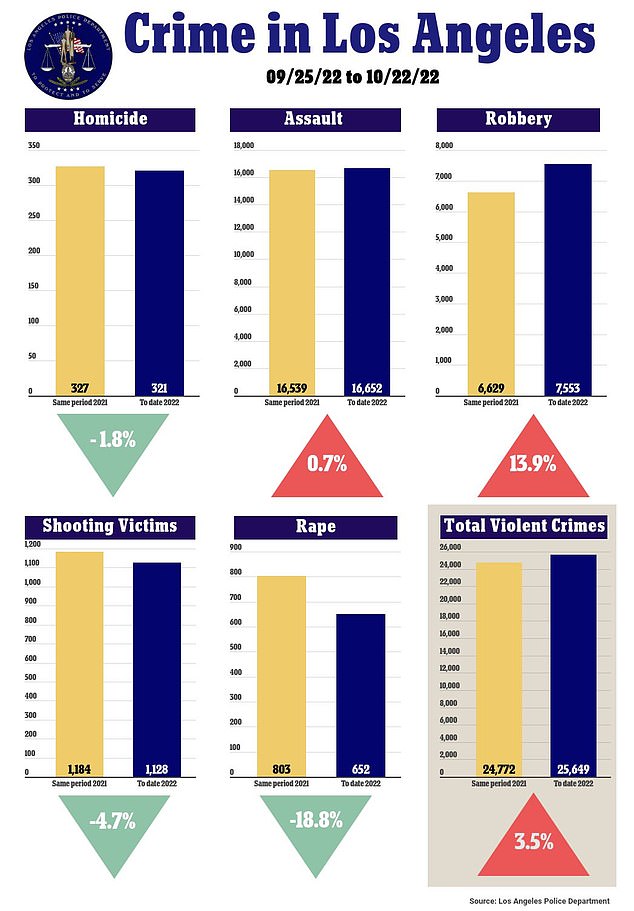 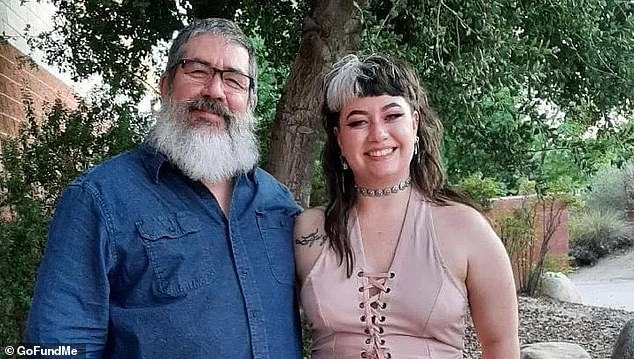 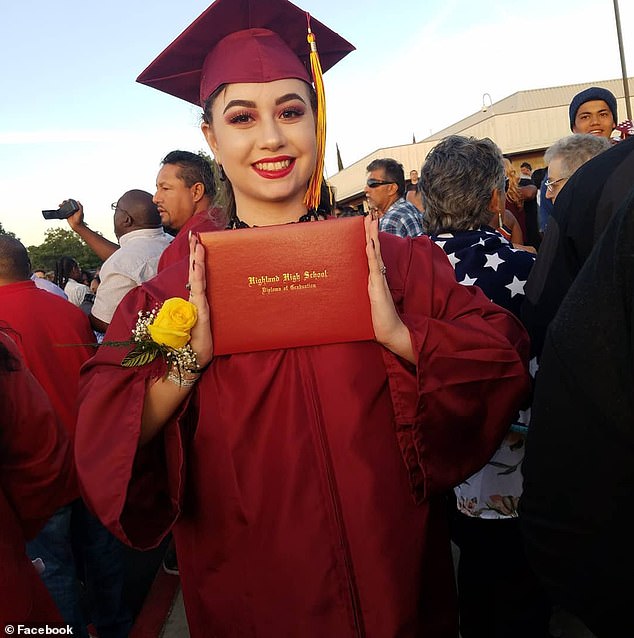 McKenna Evans during her graduation from Highland High School

LA has seen it’s own increase in violent crime, which is up 3.5 percent from last year.

While rapes have seen a decline, robberies in the city have jumped by nearly 14 percent from last year, with police reporting 7,553 cases so far.

Homicides have only fallen by 1.8 percent, with the city seeing its latest sets of murder last Thursday where a father and daughter were stabbed to death in a Kohl’s parking lot in Palmdale.

Ken Evans, 54, and his 22-year-old daughter McKenna were killed in a seemingly random attack that happened just before noon on Thursday, LA County Sheriff’s Department said.

Elizabeth Evans, who is Ken’s widow and McKenna’s mom, said: ‘I am completely destroyed.’

‘(McKenna) wasn’t just my daughter, she was my best friend,’ she added.

Elizabeth said she saw the suspect ‘smirk’ as he was led away in handcuffs. Los Angeles County sheriff’s deputies said they believe he is transient. 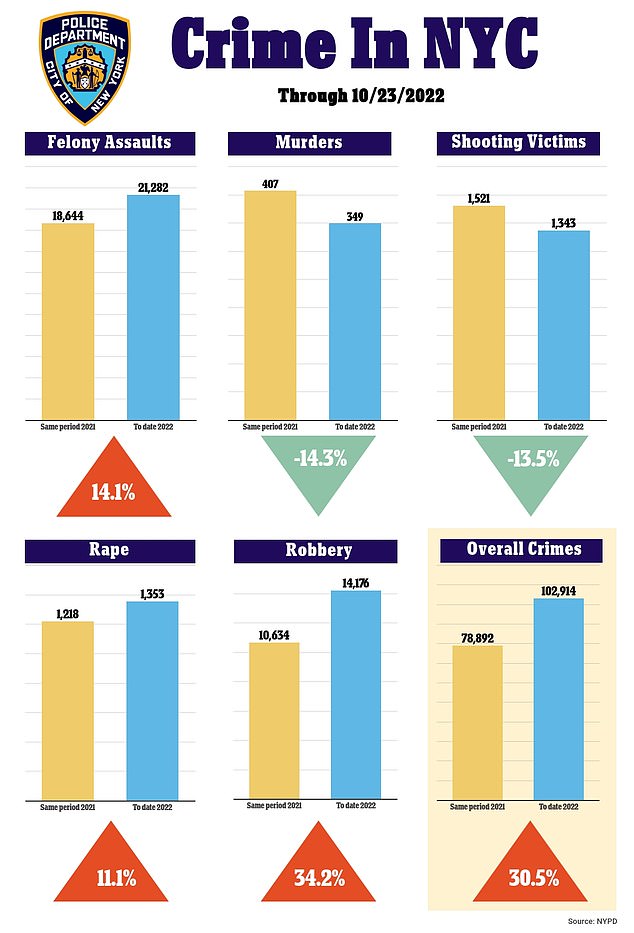 Overall crime in the city is up 31.1 percent in comparison to last year – with felony assaults, robbery, and rape leading the ranks 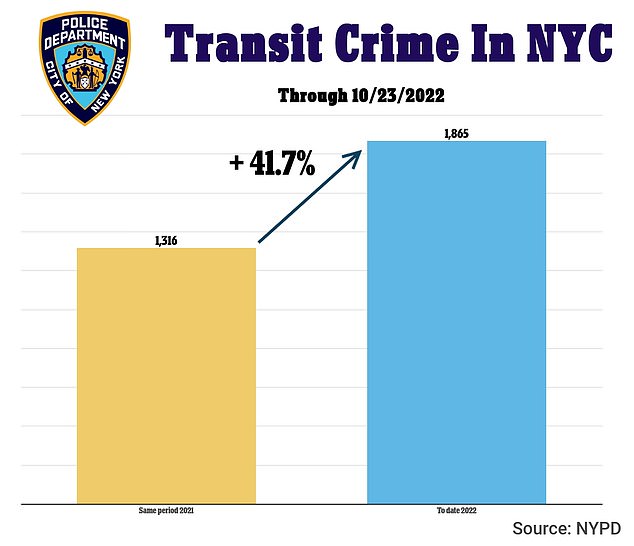 It also comes as crimes on the city’s subways are now up 41 percent over last year, murders in particular rising to their highest rates in 25 years – with nine reported this year alone 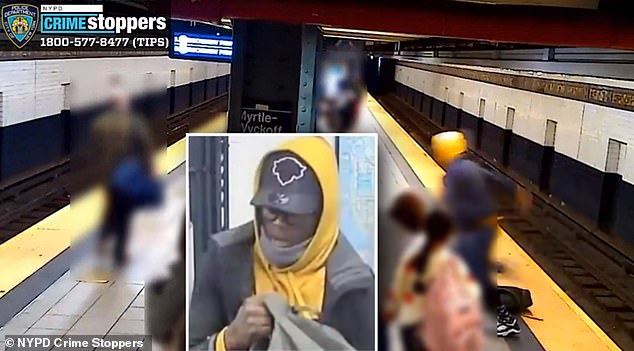 Video released by the New York Police Department on Saturday shows a man charging at a subway passenger in Brooklyn Friday afternoon, shoving him to the tracks. Similar unprovoked incidents have become commonplace over the past three years in the subway system

Violent crime in the Big Apple has soared by more than 30 percent from last year, with robberies up by 34.2 percent.

While the number of murders and shooting victims have decreased, rapes are up 11.1 percent, and felony assaults jumped by more than 14 percent.

Mayor Eric Adams has repeatedly claimed there is only a ‘perception’ that crime is out of control on the subways – even as he and New York Gov. Kathy Hochul have spent millions of taxpayer dollars to better police and monitor the system.

The statement from the former police captain came just hours after a 20-year-old Good Samaritan was stabbed on the No. 6 train during rush hour trying to break up a fight between two women.

Both women were able to flee the station unimpeded. The stabber was believed to be in her mid-twenties, and wore green shorts and had short black hair.

The victim, meanwhile, managed to survive, and was taken to a local hospital. He is expected to be OK, police revealed in an update. 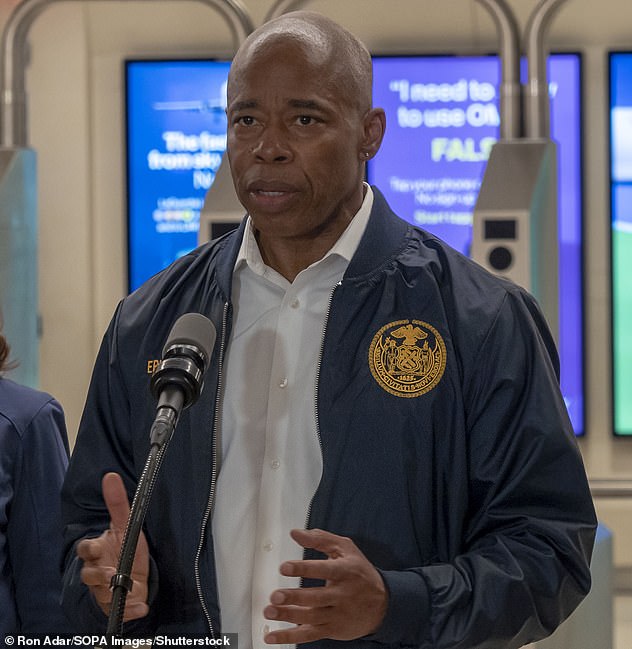 ‘We’re going to deal with those crimes that take place, and we’re going to continue to work on those six felony crimes a day that we’re witnessing,’ Adams told The New York Post of the attack, which transpired around 6 am at Brooklyn Bridge station.

He added: ‘But I know that 3.5 million people use our system every day without any encounters.’

Despite those assertions, slayings on the transportation network have skyrocketed to the highest annual levels in 25 years, with overall random violence on the city’s streets up as well.

Under pressure to crackdown on crime in the subways, Adams said he would bolster the transit system with more police and extra security measures.

The new initiative, Adams said, will add 1,200 more shifts, or 10,000 more hours per day, to enhance security in the system.

The plan came into addition to Adam’s initial Subway Safety Plan, a $97billion undertaking that has since swelled to a $100billion project after being implemented by the then-new mayor in February.

The plan saw 1,000 additional officers deployed in the subway to stop the already prevailing violence, as well as teams of health workers  into the city’s intricate subterranean network to crack down on crime.

ALISON BOSHOFF: Raymond Blanc says his good friend the King will be a great...