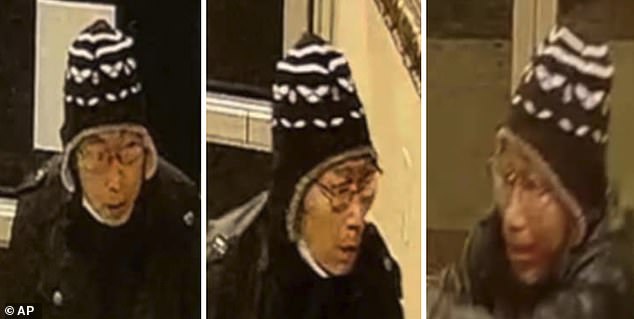 The man who carried out a mass shooting killing 10 people at a dance studio in southern California where he once taught lessons was remembered as being hostile toward his students and quick to get angry with his ex-wife.

Huu Can Tran, 72, died on Sunday from a self-inflicted gunshot wound during a standoff with police ending a manhunt that unfolded the night before with a deadly rampage at the Star Ballroom Dance Studio in Monterey Park, California.

Sources indicated the gunman was hunting for his current wife and the motive for the attack was a domestic dispute.

Tran gave dance lessons at the studio in the early 2000s, where he met his first wife. The pair quickly tied the knot, but their marriage had crumbled by 2005.

A source told LA Mag: ‘There is increasing evidence this was domestic violence.’

Chester Chong, the chairman of the Chinese Chamber of Commerce of Los Angeles and a community leader in Monterey Park, said the suspect may have been jealous about not being invited to a party his wife attended, saying: ‘This hate is because of wife and husband. I believe because of that there was the killing of innocent people.’

The ex-wife, who didn’t want her identity revealed, told CNN that Tran became easily angered when she messed up on choreography and she felt as if he had lost interest in her.

Another person who was close to Tran told CNN that the man was ‘hostile to a lot of people’ at the studio where he taught and believed they said ‘evil things about him.’

Tran was identified as the gunman who slaughtered 10 people and injured several others late Saturday night amid Lunar New Years celebrations in the predominantly Asian American community of Monterey Park.

Huu Can Tran, 72, who killed 10 at Star Ballroom Dance Studio in Monterey Park, California, was remembered as being hostile toward his students and quick to get angry with his ex-wife 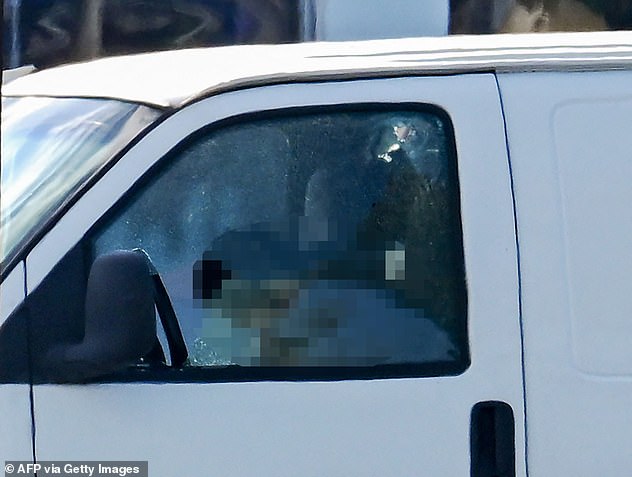 After an hours-long standoff, Tran died of a self-inflicted gunshot wound in the van he used to flee after his attempt at a second shooting that was thwarted by ‘hero’ patrons on Saturday 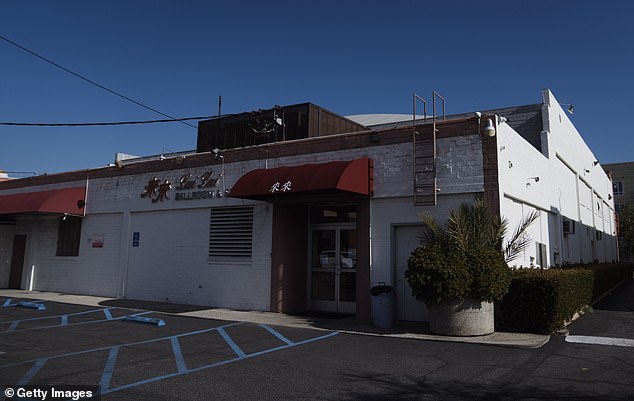 How the massacre and manhunt unfolded

10.29pm: 911 responders receive a call about a shooting in Monterey Park

10.33pm: Police and rescue units start to arrive at the scene

10.38pm: Officers say the studio has been ‘cleared’ and there are initially an estimated 10 unresponsive victims and two more in critical condition

10.39pm: Tran enters a second dance hall studio, the Lai Lai ballroom in Alhambra. His weapon is wrestled away from him

Sunday: Gunman reportedly enters a local hospital at an unspecified time with apparent fight injuries. He leaves ER before being treated

11.15am: White van in shopping center parking lot is surrounded by police and SWAT

12.30pm: Sheriff’s office say the suspect has barricaded himself in the van

1pm: Police enter the vehicle after Tran shot himself dead. Evidence linking him to the shootings is found in the vehicle

‘He intended to kill more people,’ Luna said in a news conference on Sunday night, adding that it was the patrons of the second dance studio who stopped the rampage from getting worse. ‘They saved lives. This could’ve been much worse,’ he said.

The former dance instructor, who is an immigrant from China, taught lessons at the Star Ballroom Dance Studio almost every night in the early 2000s when he lived five minutes away in the San Gabriel Valley.

Those who knew Tran and recall him being hostile to his students also told CNN that he was easily irritated, complained a lot, and didn’t seem to trust people.

Tran was also identified as the man gunman who entered the Lai Lai Ballroom in nearby Alhambra just 20 to 30 minutes after the first shooting, but brave patrons thwarted his attack.

Tran fled the scene and was at large until Sunday afternoon when police pulled him over in the van he had been spotted in. After an hours-long standoff, Tran died from a self-inflicted gunshot wound.

The deadly massacre began around 10 p.m. Saturday night when many were out to celebrate the Lunar New Year.

A dance student named Grace was practicing her dance steps at the studio where she had danced for four years when she heard what she said sounded like fireworks, she recalled to the Times.

She saw people collapsing and diving for cover under tables.

‘No one dared to flee — we all got down to the ground, hiding wherever we could,’ she said on Sunday. ‘No one could get out.’ 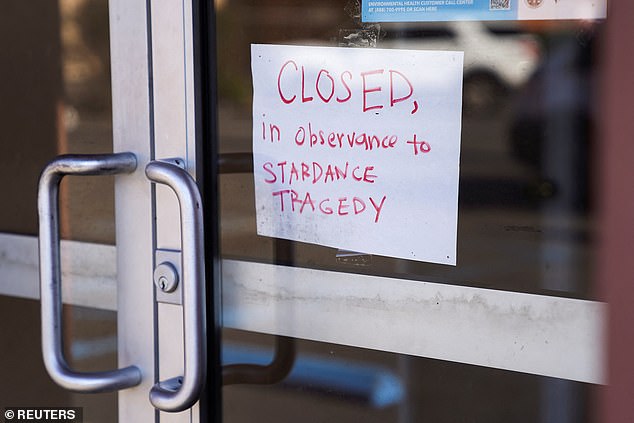 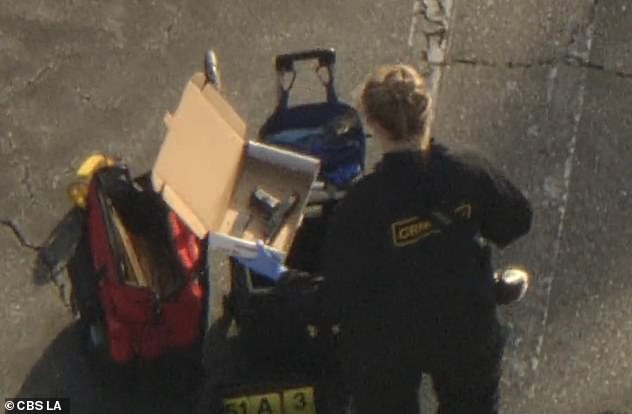 Tran was carrying what was described as a semi-automatic pistol with an extended magazine, and a second handgun was discovered in the van where he was found dead, officials said 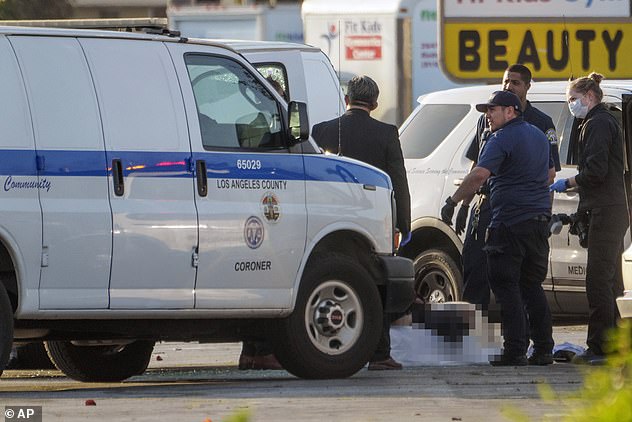 More on the Monterey Park massacre

Grace also said that a man she called ‘Ma laoban’ — ‘Boss Ma’ — was near the entrance and appeared to be the first one who was shot. There were two other people who were next to him collapsed as five or six shots occurred in rapid succession, she said.

She spotted the gunman who appeared to run out of bullets and left, but quickly returned where he unleashed another round of terror into the ballroom, killing 10 people and injuring several others.

The whole mass shooting lasted about five minutes, she said.

‘I saw him, but I was far away and the lights were dim. I could not see his face clearly,’ Grace said.

Grace added that she didn’t recognize the suspect in the photos released by local authorities Sunday morning while he was still at large.

Several families are still waiting to hear about their loved ones.

Jeff and Nancy Liu, who emigrated from China more than 25 years ago, and rarely left each other’s side, are now separated following the shooting. Their daughter Juno Blees told the New York Times that her father saw a man open fire at the dance hall.

Jeff Liu, 62, saw his wife, 63, collapse and hasn’t seen her since. Nancy’s family is hoping that she is OK and that she was taken to the hospital where they will be reunited soon.

Liu was grazed by two bullets and taken to the hospital with minor injuries. He was released on Sunday. 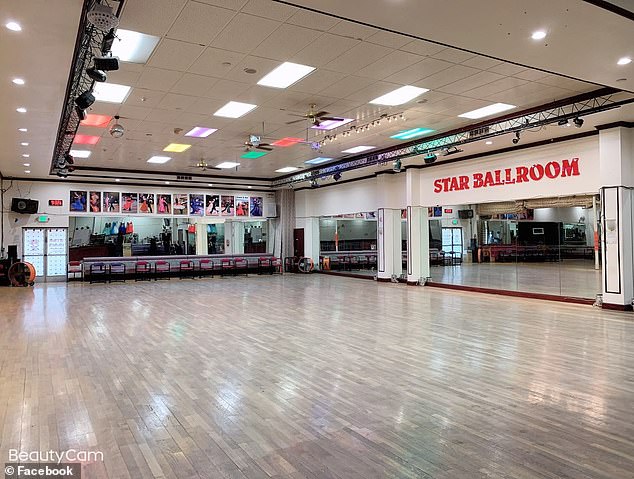 Tran gave dance lessons at the Star Ballroom Dance Studio in the early 2000s, was remembered as being hostile toward his students and quick to get angry with his ex-wife 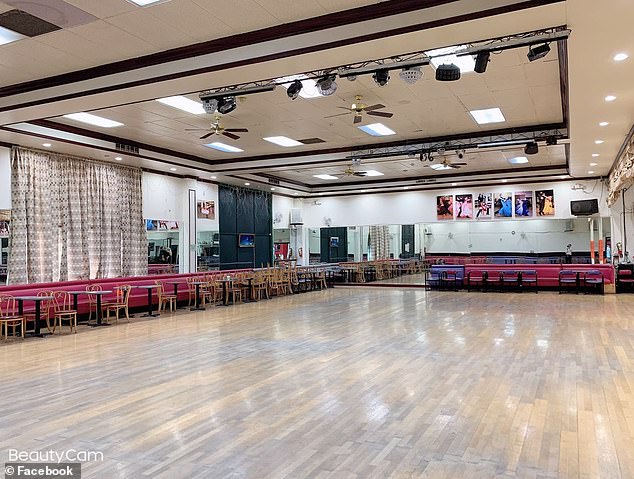 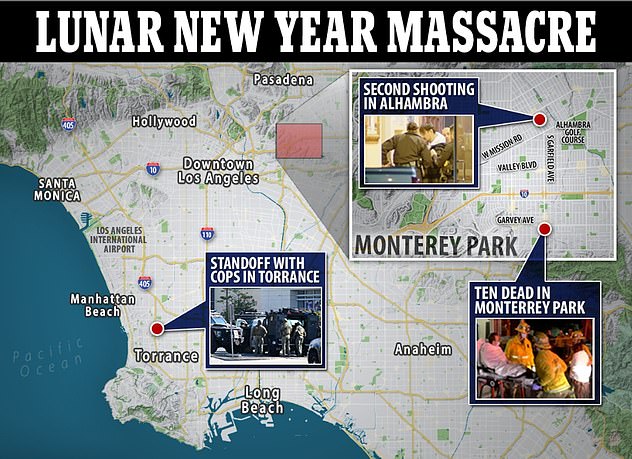 After the Monterey Park shooting, the gunman then entered the Lai Lai Ballroom in nearby Alhambra. But patrons wrestled the weapon away from him and he fled 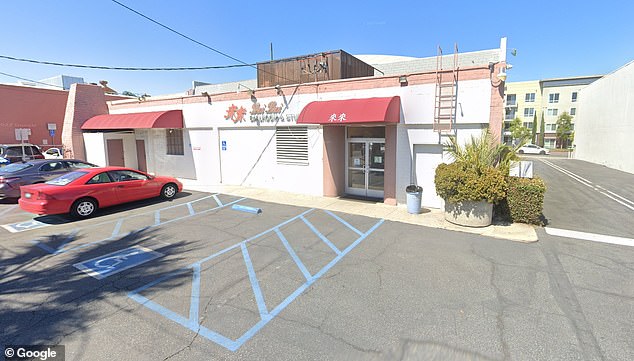 Tran was also identified as the man gunman who entered the Lai Lai Ballroom in nearby Alhambra just 20 to 30 minutes after the first shooting, but brave patrons thwarted his attack

In an update on Sunday, officials laid out how the massacre unfolded, pointing out that the death toll could have been higher.

‘The suspect went to the Alhambra location after he conducted the shooting and he was disarmed by two community members who I consider to be heroes,’ Luna said.

‘They saved lives,’ he added. ‘This could’ve been much worse. The weapon that we recovered at that second scene I am describing as a magazine-fed semiautomatic assault pistol. Not an assault rifle, but an assault pistol that had an extended large capacity magazine attached to it.’

The sheriff said the pistol Tran used appeared to be illegal in California, where state laws ban any magazine holding more than 10 rounds.

Another gun, a handgun, was later found in the van where Tran was found dead of a self-inflicted gunshot wound. Luna added that the van had different plates.

Authorities had been on the lookout for the vehicle after witnesses reported seeing the suspect fleeing Alhambra. He was also spotted seeking medical treatment at a hospital shortly before the standoff, law enforcement sources tell CNN.

The man came into the emergency room seeking treatment for injuries that were consistent with being in a fight. He waited for a short time and then left without receiving treatment, the sources said.

The hospital notified authorities when they saw that the man fit the description of the suspect’s photos posted on the sheriff’s department’s Twitter feed.

A short time later, police in Torrance pulled the white van over which led to the three-hour standoff.

By midday, police in tactical vehicles and bomb-squad trucks surrounded a white van in a parking lot 22 miles from Alhambra in Torrance, another majority Asian community.

It ended as police approached the vehicle and heard a gunshot. Tran was found dead of a self-inflicted gunshot wound.

The mass shooting sent a wave of fear through Asian American communities in the Los Angeles area and cast a shadow over Lunar New Year festivities around the country. Other cities sent extra officers to watch over the celebrations. 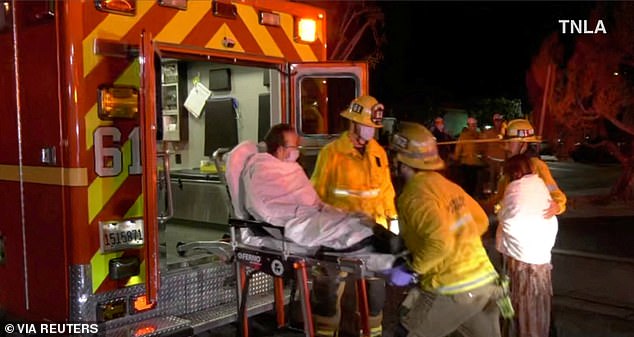 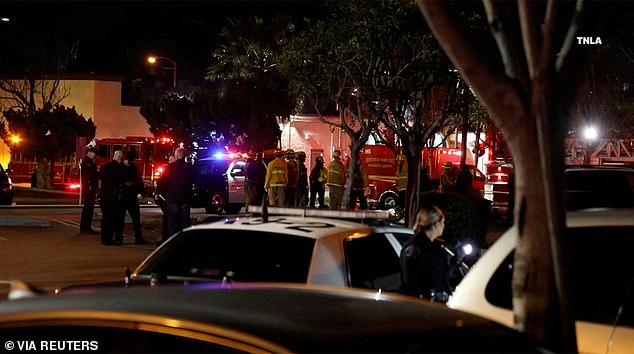 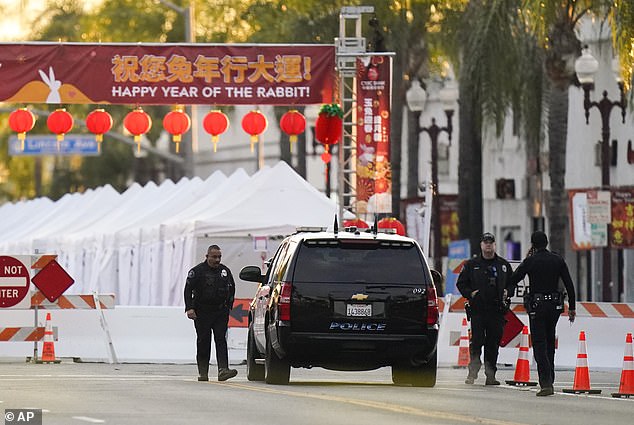 ‘The community was in fear thinking that they should not go to any events because there was an active shooter,’ Chu said, adding, ‘You are no longer in danger.’

‘What was the motive for this shooter?’ she said. ‘Did he have a mental illness? Was he a domestic violence abuser? How did he gets these guns and was it through legal means or not?’

The Star Ballroom Dance Studio is a few blocks from city hall on Monterey Park’s main thoroughfare of Garvey Avenue, which is dotted with strip malls of small businesses whose signs are in both English and Chinese.

Cantonese and Mandarin are both widely spoken, Chinese holidays are celebrated and Chinese films are screened regularly in the city. 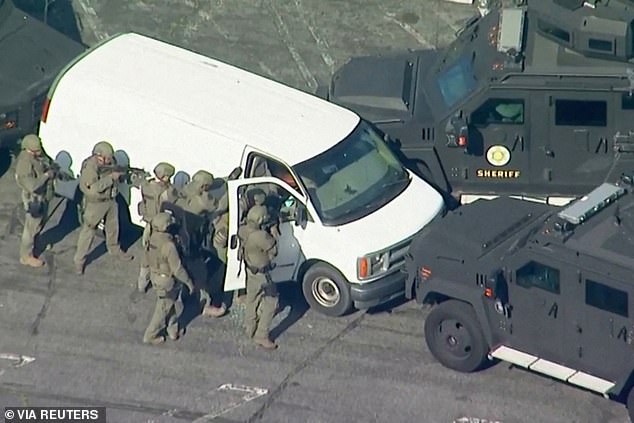 Shortly after he was spotted at the hospital for treatment, Tran was pulled over by police. A SWAT team swarmed the van after a three-hour long standoff 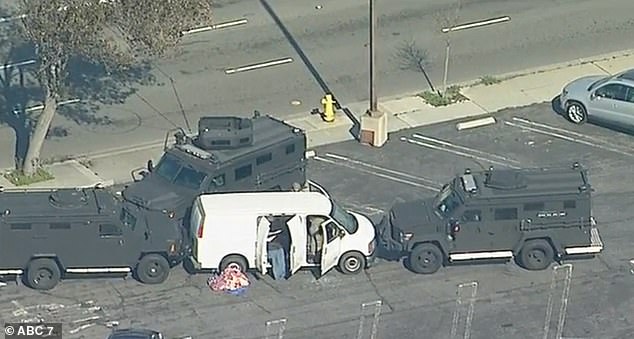 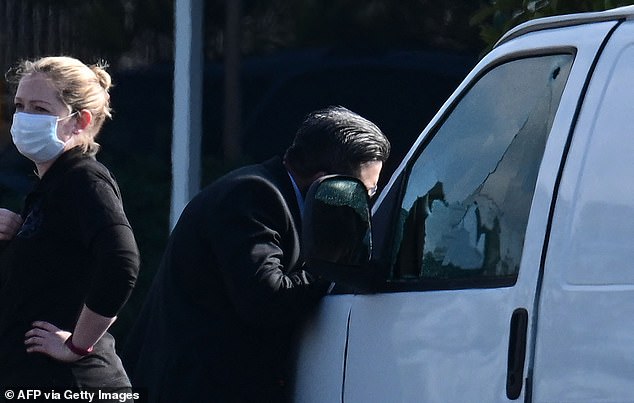 The business offered dance lessons from tango to rumba to the fox trot and rented its space for events. On Saturday, its website said, it was hosting an event called ‘Star Night’ from 8 p.m. to 11:30 p.m.

Shortly after 10 p.m. on Saturday, officers arrived at the dance hall where there had been reports of shots fired. Ten people were killed and 10 were injured.

Authorities are working to identify the victims of the shooting in Monterey Park, California, according to Luna, who said this is why they aren’t able to give exact ages.

‘I don’t have the specific ages because they have not been identified. But they’re not in their 20s or 30s. They seem to be probably, I would say, in their 50s, 60s, and maybe some even beyond that,’ Luna said.

The massacre was the nation’s fifth mass killing this month. It was also the deadliest attack since May 24, when 21 people were killed in an elementary school in Uvalde, Texas.

Republicans ask why Biden classified documents not revealed until after election