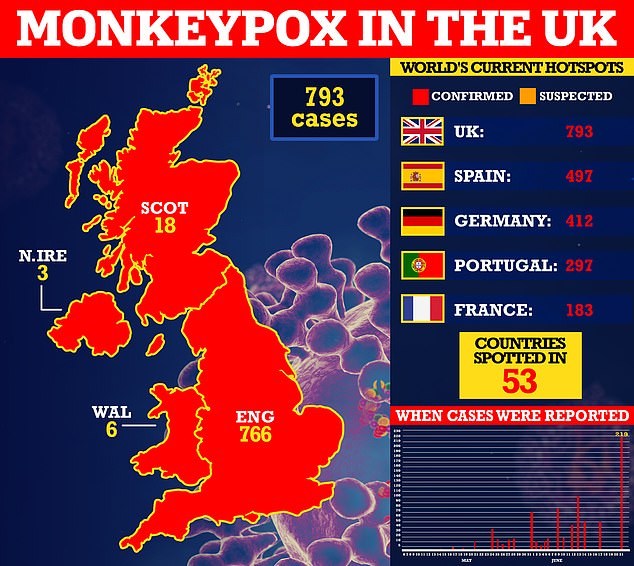 Covid-weary Britons have been warned that the monkeypox outbreak could get 10 times bigger.

The claim was made by a group of top experts, including ones who sit on the same Government advisory committee that produced gloomy models to justify lockdown restrictions.

London School of Hygiene & Tropical Medicine researchers argued it is ‘highly likely’ that another 10,000 cases of the tropical virus would be spotted worldwide.

The modelling suggested, however, that a surge in cases among groups other than gay and bisexual men was ‘unlikely’.

Dozens of countries, including the US, Spain and Germany, have been struck by the outbreak — the biggest ever detected outside of Africa to date.

Almost all of cases so far have been identified in the men who have sex with other men community.

Authorities are desperately to contain the tropical virus, amid fears it could become endemic in Europe.

The UK today reported another 219 infections, bringing the UK total to 739. London is the country’s virus hotspot, logging 498 of the cases.

UK Health Security Agency (UKHSA) bosses confirmed 216 of the new cases were detected in England, while two were spotted in Scotland and one was confirmed in Northern Ireland. 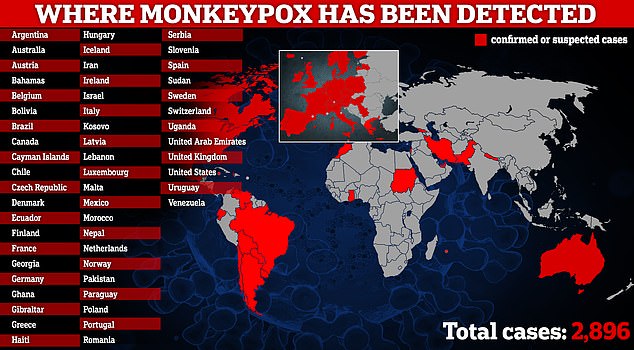 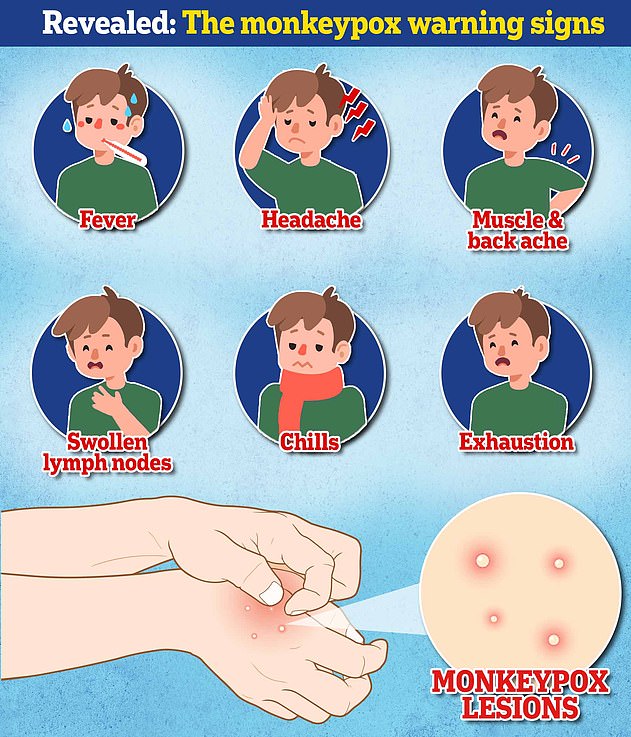 Officials are urging gay and bisexual men to be aware of new lesions, rashes or scabs and get in contact with a sexual health clinic 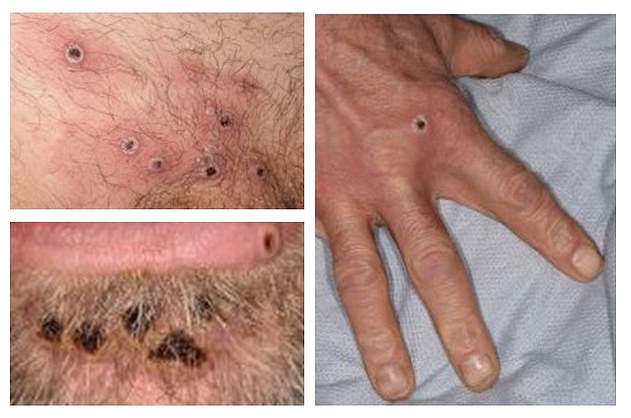 1958: Monkeypox was first discovered when an outbreak of a pox-like disease occurred in monkeys kept for research.

1970: The first human case was recorded in 1970 in the Democratic Republic of Congo and the infection has been reported in a number of central and western African countries since then.

2003: A Monkeypox outbreak occurred in the US after rodents were imported from Africa. Cases were reported in both humans and pet prairie dogs. All the human infections followed contact with an infected pet and all patients recovered.

SEPTEMBER 8, 2018: Monkeypox appeared in the UK for the first time in a Nigerian naval officer who was visiting Cornwall for training. They were treated at the Royal Free Hospital in London.

SEPTEMBER 11, 2018: A second UK monkeypox case is confirmed in Blackpool. There is no link with the first case in Cornwall. Instead, the patient is though to have picked up the infection when travelling in Nigeria. They were treated at Blackpool Victoria Hospital and Royal Liverpool University Hospital.

SEPTEMBER 26, 2018: A third person is diagnosed with monkeypox. The individual worked at Blackpool Victoria Hospital and treated the second Monkeypox case. They received treatment at the Royal Victoria Infirmary in Newcastle.

DECEMBER 3, 2019: A patient was diagnosed with monkeypox in England, marking the fourth ever case.

MAY 25, 2021: Two cases of monkeypox were identified in north Wales. Both patients had travel links to Nigeria.

A third person living with one of the cases was diagnosed and admitted to hospital, bringing the total number ever to seven.

MAY 7, 2022: A person was diagnosed with Monkeypox in England after recently travelling to Nigeria. The person received care at the expert infectious disease unit at Guy’s and St Thomas’ NHS Foundation Trust in London.

MAY 14, 2022: Two more cases were confirmed in London. The infected pair lived in the same household but had not been in contact with the case announced one week earlier.

One of these individuals received care at the expert infectious disease unit at St Mary’s Hospital in London. The other isolated at home and did not need hospital treatment.

MAY 16, 2022: Four more cases were announced, bringing the UK total to seven. Three of these cases are in London, while one of their contacts is infected in the north east of England.

The spate of cases was described as ‘unusual’ and ‘surprising’ as experts warn gay and bisexual men to look out for new rashes.

MAY 19, 2022: Two more cases were revealed, with no travel links or connections to other cases. The cases were based in the South East and London. Fears began to grow that infections are going undetected.

MAY 20, 2022: Eleven more cases are announced, meaning Britain’s monkeypox outbreak have doubled to 20. Minsters discuss the possibility of a public health campaign to warn gay men the disease may be more prevalent for them

MAY 23, 2022: Scotland logs its first ever monkeypox case and 36 more infection announced in England. It brings the UK total to 57.

MAY 25, 2022: Another seven infections are spotted in England, meaning 78 cases have been detected in the UK.

MAY 29, 2022: World Health Organization (WHO) says risk of monkeypox is ‘moderate’, citing concerns about virus infecting children and immunosuppressed people if it becomes more widespread.

MAY 31, 2022: Eleven infections are spotted across the UK, bringing the infection toll to 190.

JUNE 1, 2022: Another five cases are spotted in England and one is detected in Scotland, meaning the UK has now logged 196.

JUNE 8, 2022: Some 18 people in England and one in Scotland test positive, meaning 321 people have had infections confirmed.

JUNE 10, 2022:  Forty-three more cases are spotted in England and one in each in Scotland and Wales. The UK has now confirmed 366 infections.

The scientists behind the monkeypox modelling include Professor John Edmunds, an epidemiologist at the LSHTM and a Government scientists.

Professor Edmunds, along with two of the other study authors, were behind modelling that predicted 6,000 deaths per day, 20 times more than the actual peak, and called for a Christmas lockdown.

They also warned Omicron could cause daily hospitalisations could reach 10,000 — more than four times higher than true figure of around 2,400.

In their latest modelling, Professor Edmunds and other LSHTM scientists looked at how monkeypox could keep spreading, based on sexual partnership data in the UK.

This data was gathered from the National Surveys of Sexual Attitudes and Lifestyles — a survey of 45,000 people conducted every decade.

Monkeypox is not normally a sexually-transmitted infection, but it is thought to be the main mode of transmission in the ongoing outbreak.

It can also be spread through touching clothing, bedding or towels used by someone with the monkeypox rash.

At the time of the modelling on May 31, 728 confirmed and suspected cases had been reported worldwide in more than 25 countries.

The results, published on pre-print website medRxiv, show that without interventions or changes in sexual behaviour, it is ‘highly likely’ that a ‘major outbreak’ would be seen among men who have sex with men.

This means another 10,000 cases would be logged, on top of the 728 already confirmed by the end of May, according to the findings, which have not been peer-reviewed.

The modellers said their findings show that a ‘small fraction’ of individuals with a ‘disproportionately large’ number of sexual partners could explain the ‘sustained growth’ of monkeypox among men who have sex with men.

Monkeypox likely always had the risk of ‘substantial transmission potential’ among this community, their paper states. But due to few cases outside of endemic nations it has not been able to take off, they said.

However, the team said sustained transmission in other groups is ‘unlikely’. But they noted that between 10 and 10,000 extra cases could be spotted outside of the men who have sex with men community if lots of this group become infected.

The monkeypox R rate — the number of people an infected person passes the virus onto — may be ‘substantially greater than one’ which could make it challenging to contain the outbreak, their paper states.

Contact tracing and vaccinating close contacts of infected people — the approaches used in the UK — only work if almost all contacts of an infected person are identified, they warned.

They said experts should identify ‘acceptable and effective’ ways of preventing transmission among men with the highest number of sexual partners who could have a ‘disproportionate effect on transmission overall’.

It comes as the UKHSA today confirmed Britain’s outbreak has grown by 38 per cent since Friday to 793.

Among the 766 cases with confirmed addresses, 498 are in London, 37 are in the South East and 26 are in the North West. All other regions have logged 20 cases or fewer.

Public Health Scotland on Sunday said that all cases appear to be ‘generally mild and not life-threatening’ with no reported deaths in the UK to date.

Monkeypox cases have been aged 37, on average, health bosses said.

The UKHSA advises Britons to contact their sexual health clinic if they have a rash with blisters and have been in close contact with a suspected or confirmed monkeypox case or have been in West or Central Africa in the last three weeks.

As part of efforts to thwart the ever-growing outbreak, both confirmed cases and close contacts are offered the Imvanex jab, which is 85 per cent effective against the virus.

The strategy, known as ring vaccination, has been used in the past and is proven to work.

A large proportion of cases so far have been identified in the gay, bisexual and men who have sex with other men community.

But anyone can get monkeypox if they have had close contact with an infected person.

The disease is usually mild but can cause severe illness in some cases.

A rash can develop, often beginning on the face, which then spreads to other parts of the body including the genitals.

The UKHSA this month declared the virus a notifiable disease. It means all medics must alert local health authorities to suspected cases.

The tropical virus now carries the same legal status as the plague, rabies and measles.

Experts have warned that monkeypox could become endemic among animals in Europe, as it is in parts of Nigeria, if the virus spreads to pets and wildlife.

This would make animals a permanent reservoir of the virus that could infect humans, triggering sporadic outbreaks.

Monkeypox, which was first discovered in lab monkeys in the late 1950s, is usually mild but can cause severe illness in some cases.

It can kill up to 10 per cent of people it infects. But the milder strain causing the current outbreak kills one in 100 — similar to when Covid first hit. No monkeypox deaths linked with the ongoing outbreak have yet been reported.

The virus has an incubation period of anywhere up to 21 days, meaning it can take three weeks for symptoms to appear.

Lebanon on Monday became the latest nation to confirm an infection. The country’s health ministry said the patient had recently travelled abroad and was quarantining at home.

Kate Ritchie set to be replaced by Ricki-Lee Coulter on Nova after falling out...

Miracle as missing boy, 8, is found in sewer a WEEK after vanishing from...