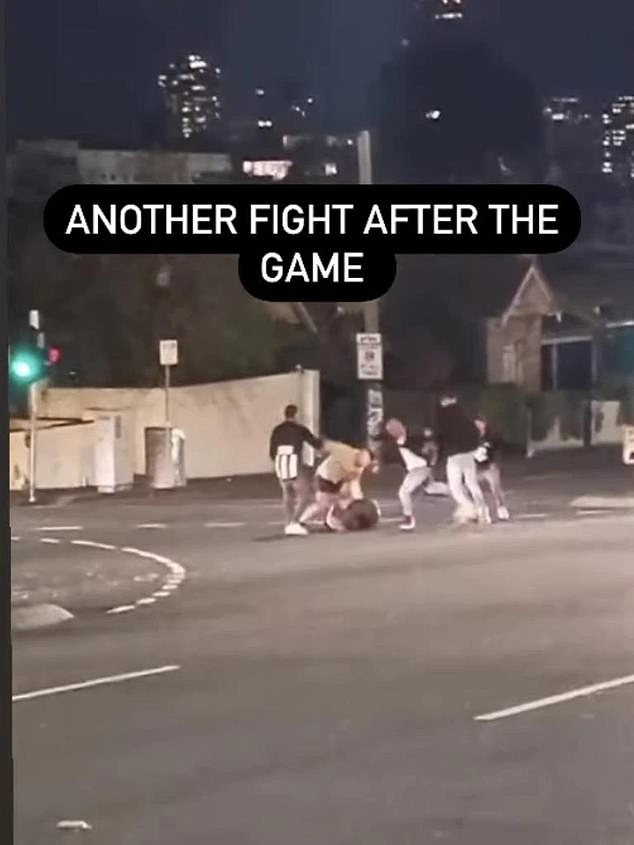 The video was captured after Collingwood won a four-point thriller over arch-rivals Carlton at the MCG on Sunday afternoon.

In the clip, which was later shared to social media, six men can be seen trading punches and kicks in the middle of a Hoddle St intersection.

One of the men then falls to the ground before other men run over and continue to pummel him.

He appears to be kicked multiple times before clip cuts out.

Victoria Police are investigating the incident.

The incident comes after a 26-year-old man was charged with allegedly bashing a man with a didgeridoo outside the MCG after last week.

Sunday was the second-biggest attendance at an AFL match since the 2019 grand final when 100,014 people watched Richmond belt GWS with 80,627 fans filing into the MCG.

The round-11 feature match lived up to expectation and Magpies fans launched into their famous ‘Collingwood’ chant when they led by 23 points during the final term. 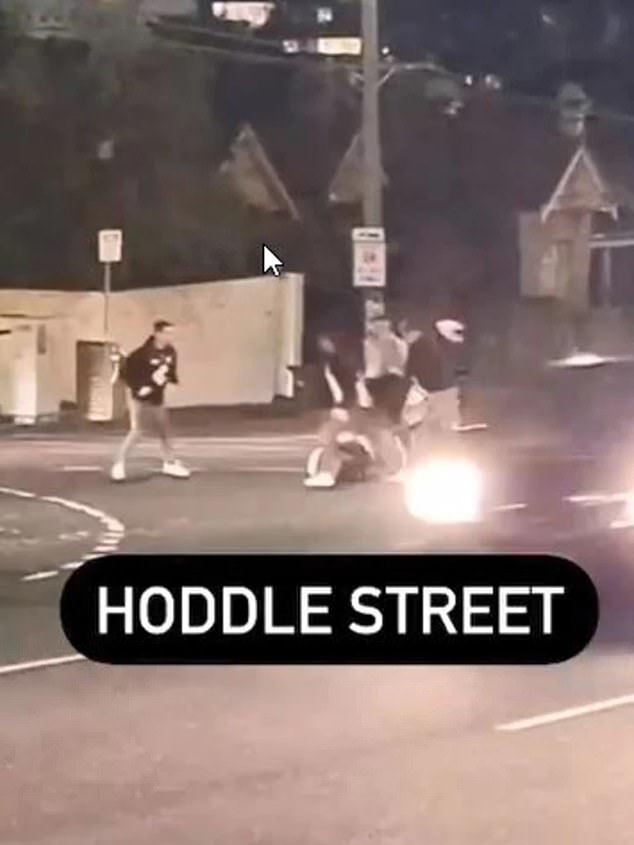 In the clip, which was later shared to social media, six men can be seen trading punches and kicks in the middle of a Hoddle St intersection

But Carlton produced one last surge in a see-sawing contest and two late goals from Charlie Curnow set up a grandstand finish.

Jack Silvagni’s hurried shot at goal in the dying seconds drifted narrowly wide for the Blues.

‘Geez, I love it when they sing our song,’ Collingwood coach Craig McRae said after his Magpies hung on for a classic victory.

‘We really appreciate our fans and we’ve been talking about honouring our jumper all year, so hopefully our fans are proud of us today.’

Carlton, who are still firmly in top-four contention despite Sunday’s loss, have featured in three of the matches in the top six for attendance figures this year.

Fans have bought into Carlton counterpart Michael Voss’ vision in his first season at the helm and the Blues appear headed for a first finals appearance in nine years.

‘(The crowd) has been the exciting part of the first half of the year,’ Voss said.

A record crowd at the Australian Formula One Grand Prix in April showed Melbourne is finally back to embracing major sporting events and there have now been five AFL crowds at the MCG this season with more than 70,000 fans in attendance.

But AFL crowds are down ‘on average a few thousand across the board’ compared to the record-breaking 2019 season, according to league boss Gillon McLachlan.

Despite that, more than 2.7 million fans have attended AFL matches this year in what McLachlan dubbed ‘the game’s bounce back’ after two years heavily impacted by COVID-19.

How Afghan ministers fled the country with millions  they have now invested in luxury...

Zac Brown Band cancels show in Vancouver after some members are denied entry at...