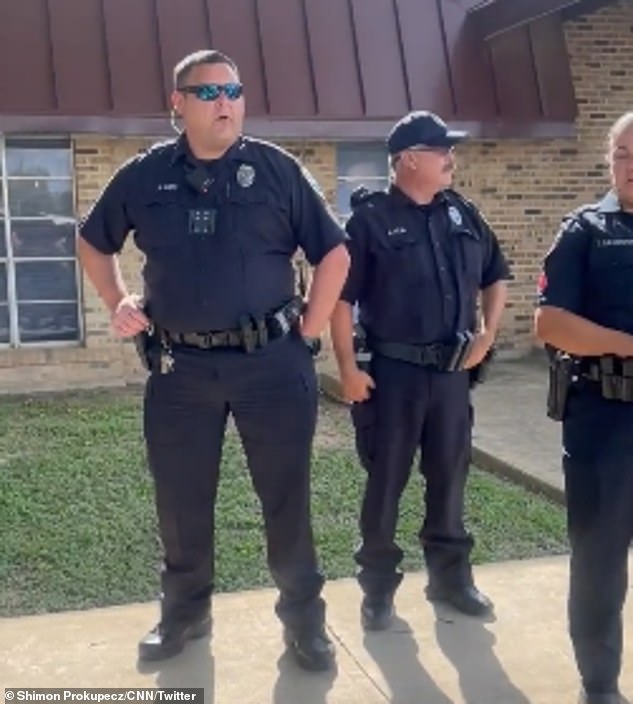 This is the moment that police threatened a CNN reporter with trespassing charges  if he and his crew didn’t leave Uvalde school district grounds.

CNN reporter Simon Prokupecz was at Uvalde Independent School District to question Uvalde ISD Police chief Pedro Arredondo about his actions during the Robb Elementary School massacre on May 24.

Prokupecz asked Arredondo why he had ordered his officers to wait outside the school while Salvador Ramos, 18, was inside killing 19 kids and two teachers.

Arredondo deflected Prokupecz’s questions, repeatedly saying that there would be answers once the parents of victims were done grieving.

Shortly after confronting the chief, Prokupecz was confronted by a group of Uvalde ISD officers who told him that cops from the Uvalde Police Department were on the way, and that he and his crew would be charged with trespassing if they were still present when they arrived.

‘Yeah, they want us to give you guys the initial warning, and then if you guys are still present, they’re going to issue criminal trespasses,’ another officer adds.

‘Cause they themselves have asked y’all to leave, so,’ the first officer then says with a frown. 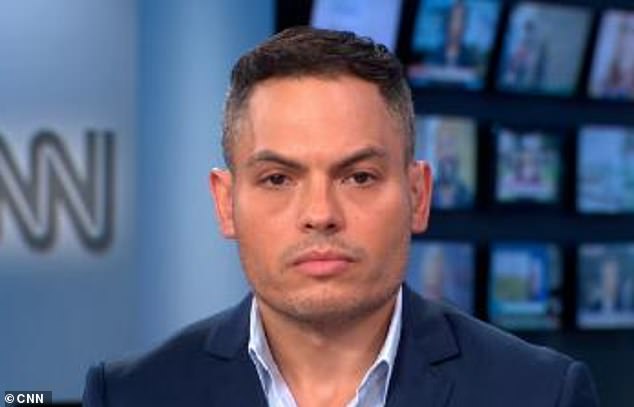 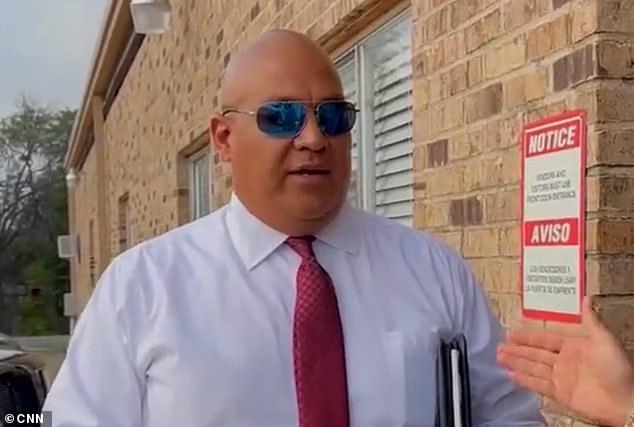 Uvalde ISD Police chief Pedro Arredondo. He has come under fire after being accused of giving the order to not have officers enter the room where the active shooter was holed up with students at Robb Elementary School on May 24

On Tuesday, Travis Considine, a spokesman for the Texas DPS, said Arredondo had stopped assisting their inquiries.

‘The chief of the CISD did an initial interview but has not responded to a request for a followup interview that was made two days ago,’ he told DailyMail.com.

Arredondo has been fiercely criticized by state officials, the media and grieving parents for failing to send his officers into Robb Elementary School when it was attacked last week.

Arredondo believed that the 18-year-old gunman, Salvador Ramos, was barricaded alone inside the building, and waited over an hour before breaching the classrooms – where 19 children and two teachers had been killed by the time they entered.

When asked by CNN reporter Prokupecz on Wednesday to defend his moves as the incident commander during the massacre, Arredondo declined, saying: ‘We’re going to be respectful to the families.’

‘Just so you know, we’re going to do that eventually. Whenever this is done and the families quit grieving, then we’ll do that obviously,’ added Arredondo, referring to the slew of funerals taking place in Uvalde this week.

Arredondo also appeared to dispute the claims that he has not been cooperating with an investigation into the shooting and police response by the Texas DPS.

Prokupecz said that a short time after he confronted Arredondo, a spokesperson from the district came out and provided a statement claiming that the school district was cooperating with the DPS, but that they would not answer questions until the investigation was completed.

‘UCISD has and will continue to work with law enforcement who are investigating the event and realize that many questions remain,’ the statement read, ‘Because the investigation is ongoing and information is evolving, we are going to reserve comment until all state and federal agencies have completed their review.’

After the statement was issued, the ISD police told Prokupecz and the CNN crew that police were on the way, and threatened them with criminal charges.

A reporter with the San Antonio Express-News, Guillermo Contreras, also claimed that the ISD had issued the same trespassing threat and warning to him, tweeting photos of what he described as ‘security detail’ surrounding the district office building. 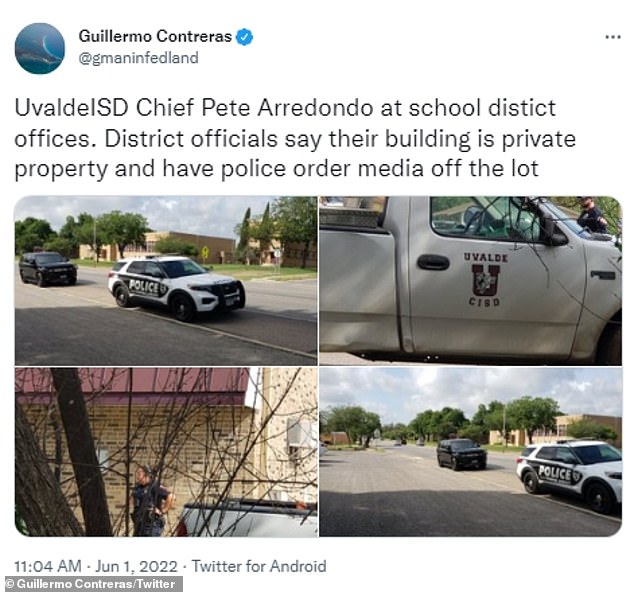 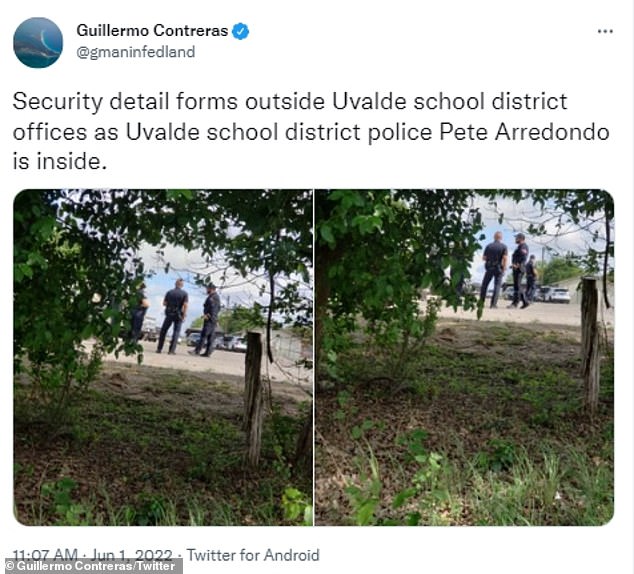 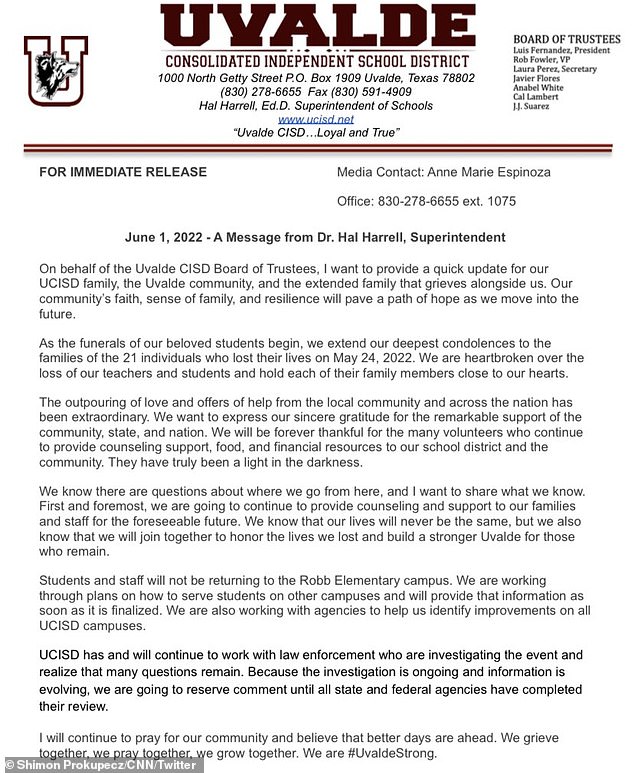 The statement released by the Uvalde ISD to CNN reporter Simon Prokupecz. Prokupecz tweeted that the statement did not answer any of his questions about responsibility

Four thieves use SLEDGEHAMMER to smash into New York jewelry store and make off...