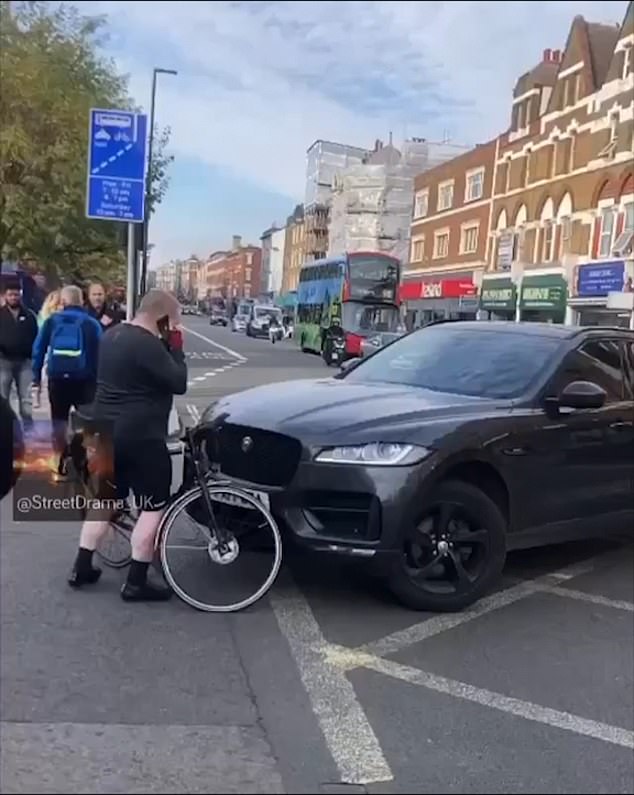 By Madeleine Ross For Mailonline

The shocking moment a £47,000 black Jaguar drives over an expensive bike, smashing it to pieces and leaving onlookers horrified, has been captured on video.

A Lycra-clad cyclist is seen standing in the road at the junction of Kilburn High Road and Brondesbury Road after a spat with the driver of the Jaguar.

The cyclist is holding a phone to his ear and is believed to have been on the phone to the police.

Moments later the Jaguar surges forward, leaving the cyclist milliseconds to jump out of the way of the SUV.

The cyclist was standing in the road at the junction of Kilburn High Road and Brondesbury Road when the Jaguar collided with his bike. He is believed to have been on the phone to police following a spat between the men

His black road bike is totally crushed by the vehicle and is left in several pieces in the road.

The back wheel is wrenched completely free from the frame of the bicycle.

Onlookers gasped and shouted as the bike is flattened under the tyres of the expensive SUV.

The driver then stopped the vehicle and confronted the cyclist on the pavement.

The cyclist, still on the phone, said: ‘He’s now threatening me again. The man has driven into me and then driven over my bike.’ 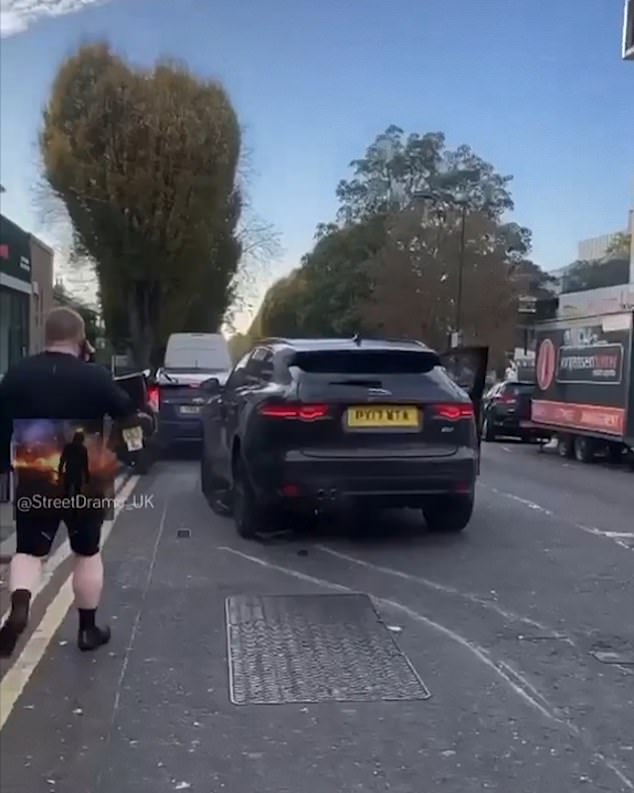 The black SUV crushes the bike underneath its tyres, leaving it in several pieces in the road. The cyclist chases after the car and tries to recover his road bike 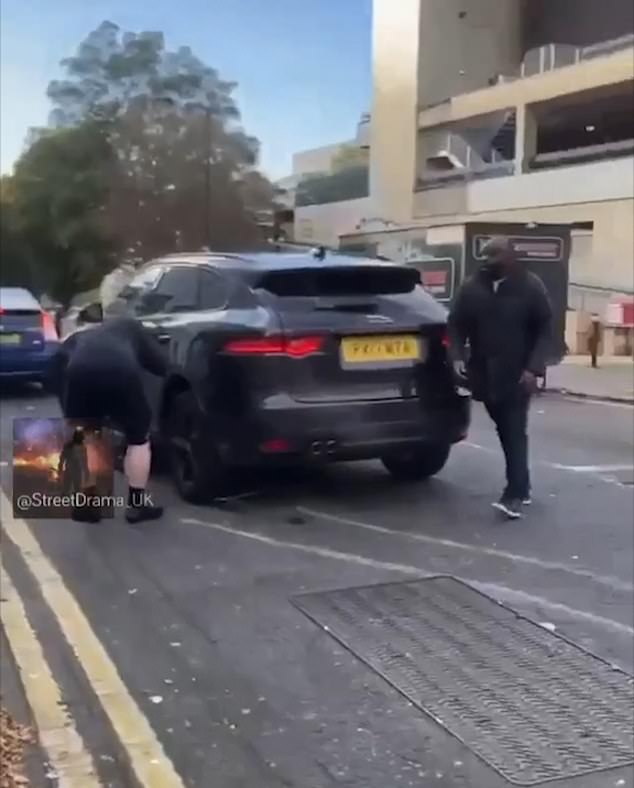 The driver (right) exits his vehicle to confront the cyclist (left), who is trying to recover his bike from under the SUV. The cyclist was on the phone and can be heard saying: ‘He’s now threatening me again’ 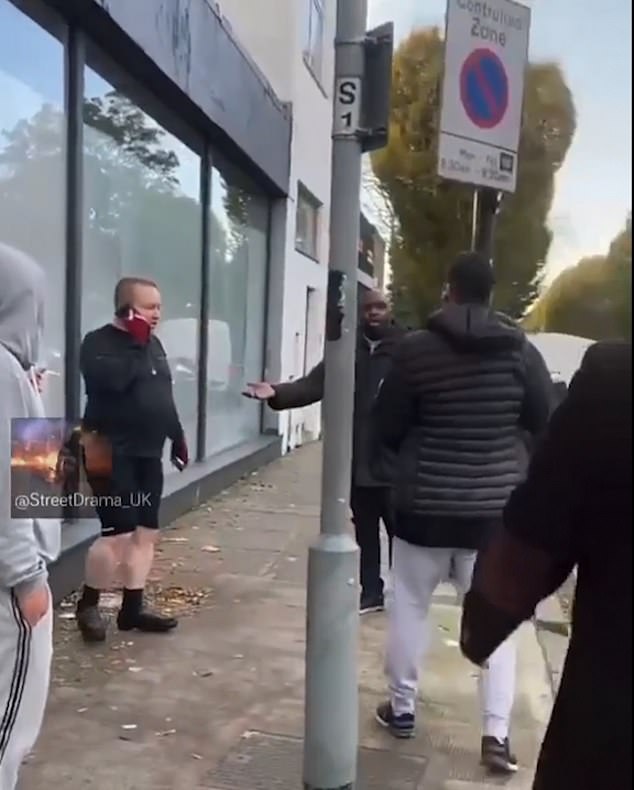 Shocked onlookers watch as the driver confronts the cyclist after the collision. The cyclist can be heard on the phone, believed to be speaking to the police 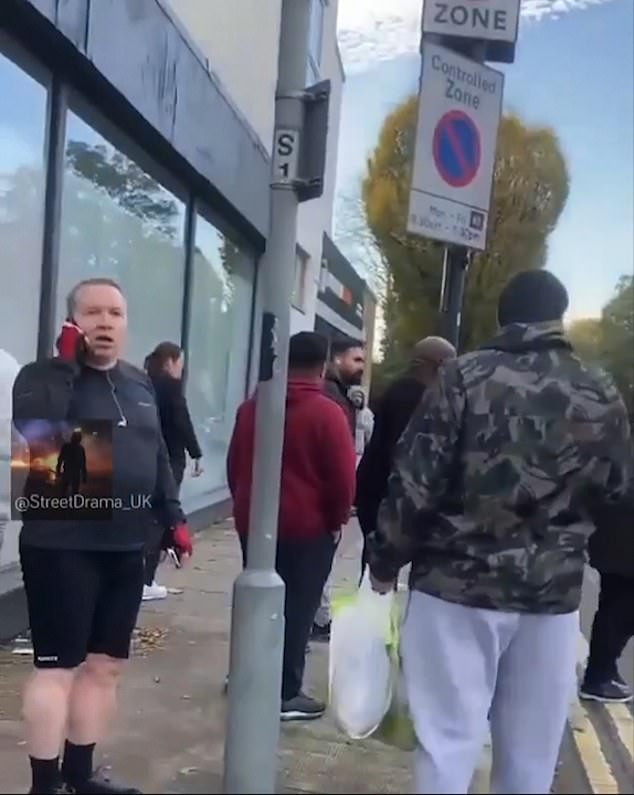 The video has divided opinion on social media, with many criticising the cyclist for standing with his bike in the middle of a busy junction. Others have said the Jaguar driver was ‘dangerous’, and one user said he was a ‘lunatic’

Some on social media supported the driver, with some complaining about the actions of cyclists generally.

Users pointed out that the cyclist appears to have been crossing the road on the phone and that the Jaguar was in a yellow box, meaning that it needed to move.

But others have said the driver overreacted and was driving dangerously.

One user said: ‘God, I’m not even a cyclist and I don’t particularly like them. But the amount of morons in these comments defending the driver, honestly.’

Influencer mum Meg Korzon reveals how she can tell the difference between her identical...

More than 2,000 migrants storm over fence into Spanish enclave bordering Morocco in chaotic...

Tyson Fury spends £3 on charity shop sunglasses after cashing in £26.2m in world...