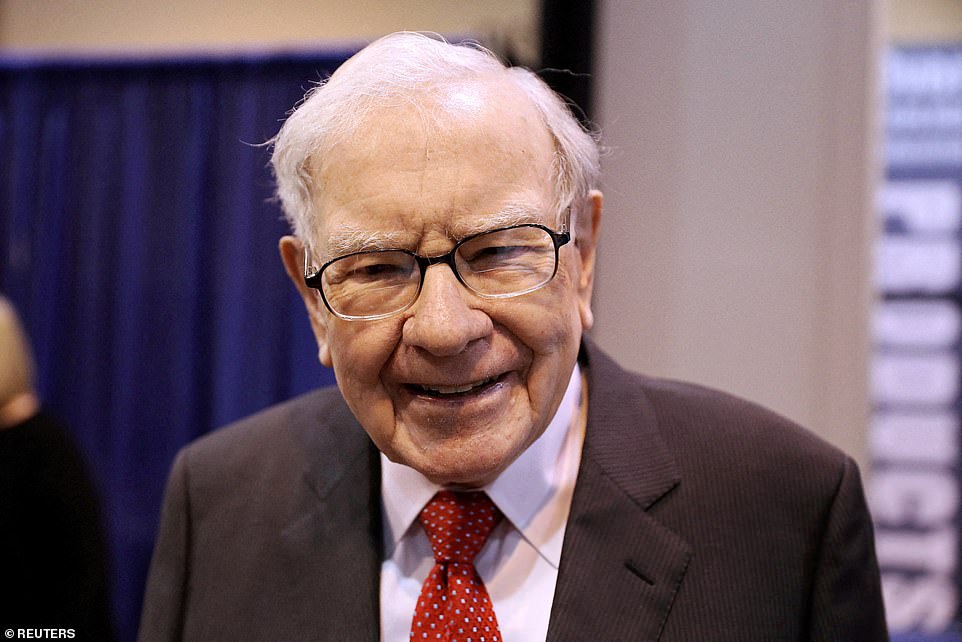 The Nebraska home where American investor Warren Buffett started his business is up for sale for almost $800,000.

A modest home, for a man now worth $125 billion, was the birthplace of Buffett Associates in 1956 and now bears the honor in Sharpie marker on the door to the ‘little [sun]room’ off the primary bedroom.

Omaha’s biggest star started the company with seven partners and the group only pitched in around $100,000 to start the business, the Wall Street Journal first reported.

The company would make a name for Buffett on Wall Street and run successfully for 13 years with an average annual growth of 30 percent, two times the amount the overall market was seeing. The company eventually merged into Berkshire Hathaway, which Buffett also owns.

The three-bedroom, three-and-a-half-bath home that started it all sits on the outskirts of Omaha in the small Dundee neighborhood. Nearly seven decades later, the 3,400-foot home is now listed at $799,000.

Billionaire Warren Buffett’s former Omaha home is on the market for $799,000. The 91-year-old started his first business Buffett Associates inside the sunroom off the master bedroom with seven partners for a grand total of $100,000. The investor is now worth $125billion 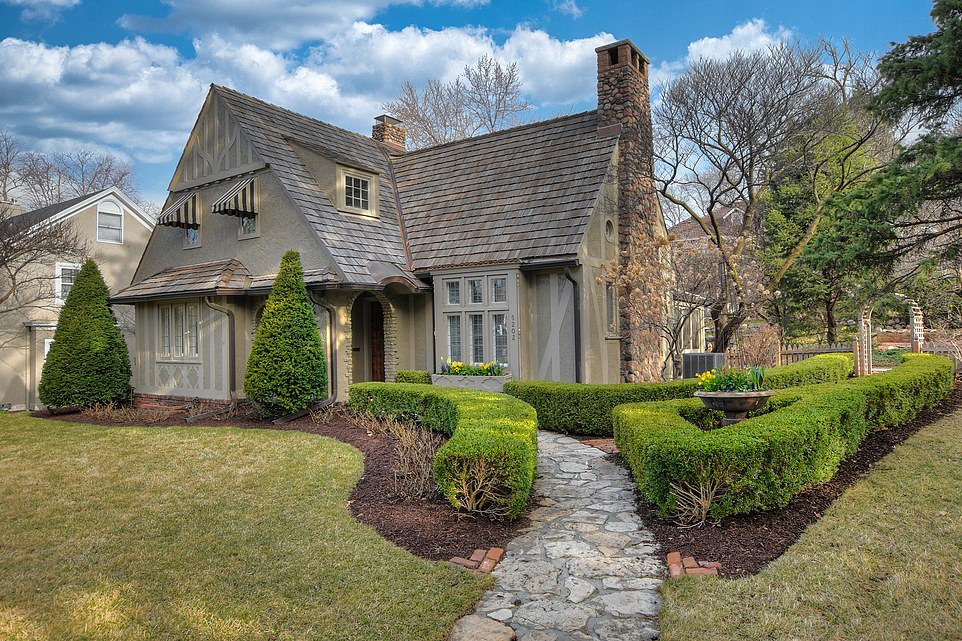 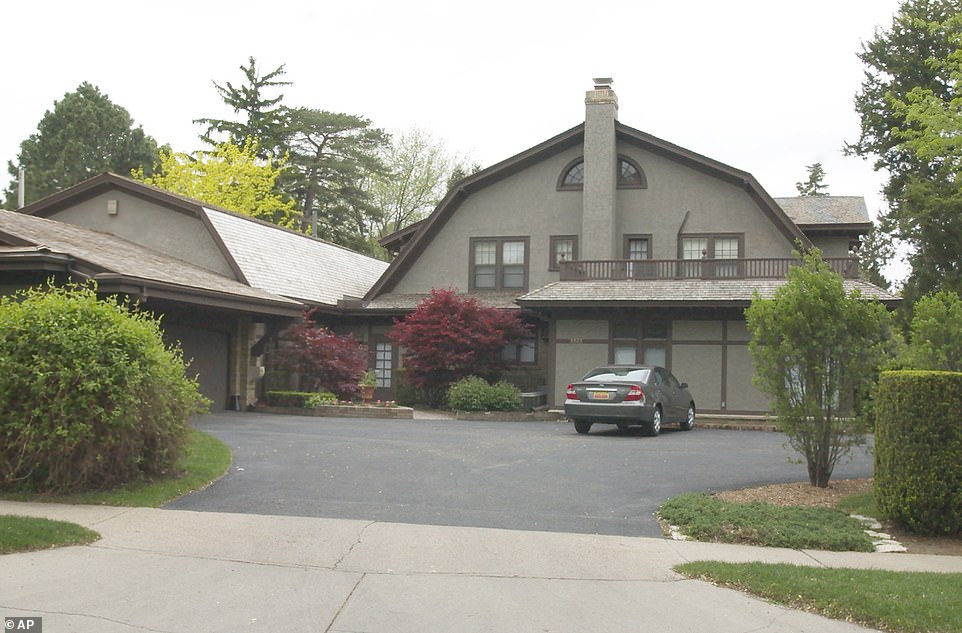 Buffett began renting the English-Tudor style home (pictured) in 1956 for one month before purchasing the house with his then wife Susan. They lived in the home for two years before they packed up and moved to a five-bedroom house nearby, where the billionaire currently lives

The modest home features subtle arches, including two in the front walkway that lead to a rustic, large wooden door surrounded by beautiful stone and cobblestone.

The living room features a vaulted ceiling with white wooden beams and gray walls, including one of three fireplaces in the home and plenty of natural sunlight. Two doors are also featured in the room, appearing to lead to the back patio.

The house has an open concept, with the stairs leading upstairs fully visible from the living room, leading to a small indoor balcony.

The master bedroom features two large windows on both sides of the room, a closet, and a connected sunroom, which features Buffett’s signature and the words: ‘The birthplace of Buffett Associates May 1956.’ 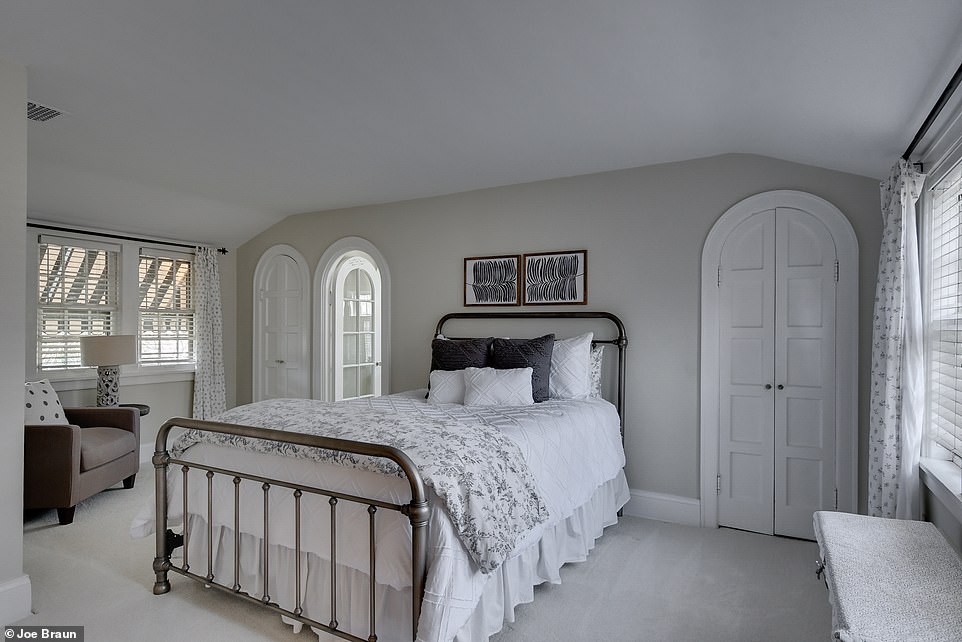 The master bedroom features windows on each side, an arched closet, and leads into the sunroom 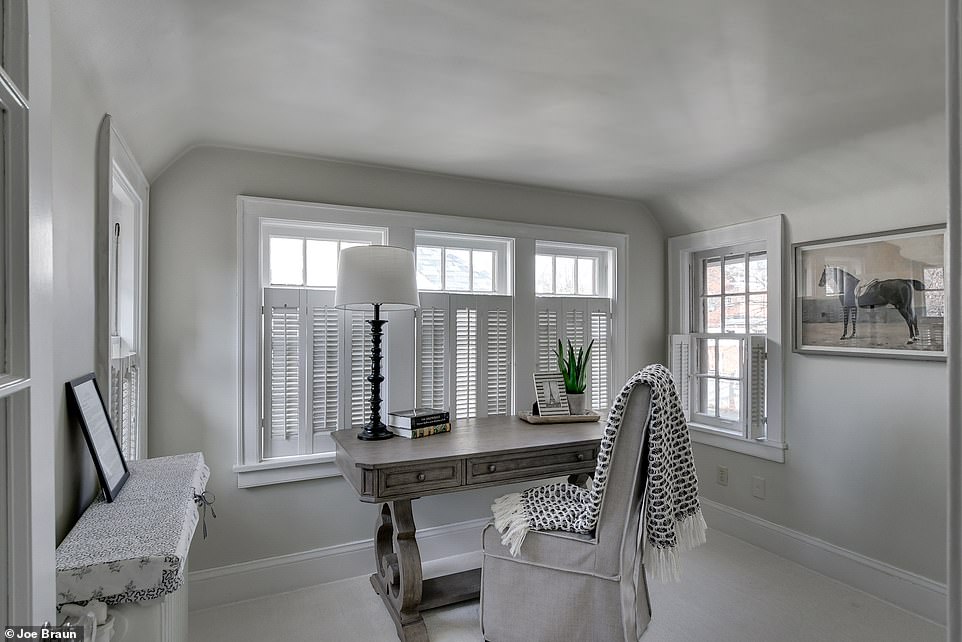 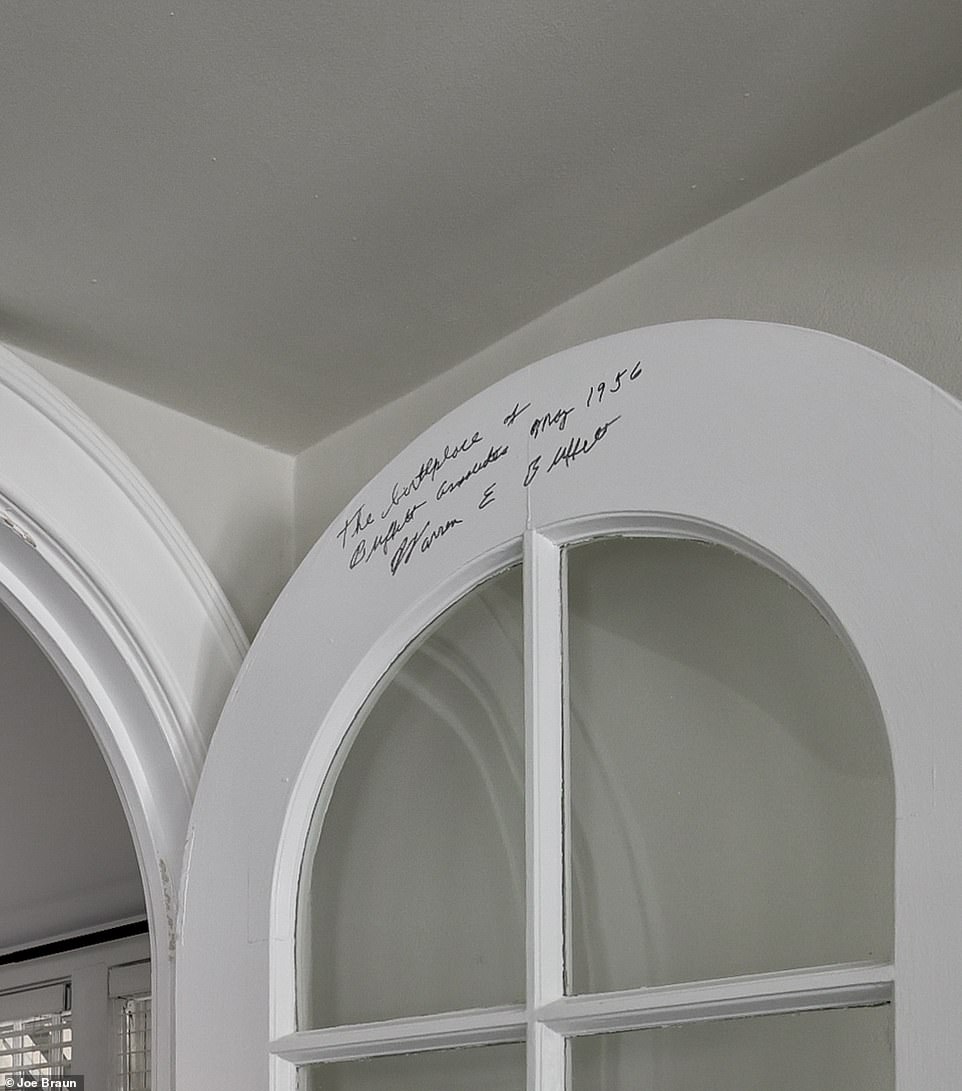 The door to the sunroom features Buffett’s signature and the words: ‘The birthplace of Buffett Associates May 1956’

The sunroom features five windows across three walls, an old-fashioned radiator, and just enough room to fit a small desk and a chair.

Buffett’s former home has a large kitchen with ample counter space to hold six barstools and a small living area off it, featuring another fireplace. It also has an extra-large gas stove with a small counter nearby, separated from the main counter space that features a silver dishwasher and a sink.

Off the kitchen is a dining room that features two large windows and a chandelier.

Buffett and his former wife Susan rented the home $175 a month – or around $1,800 today –  Alice Schroeder said in her biography of the star, called: The Snowball: Warren Buffett and the Business of Life. The couple only lived in the home for around two years before purchasing another Omaha home up the street for $31,500, or around $313,000 today. He still lives in the five-bedroom, three-bathroom home.

When the current homeowners James and Nancy Monen purchased the English-Tudor style home for $397,000 in 2005, they had no idea the investor was the former homeowner. 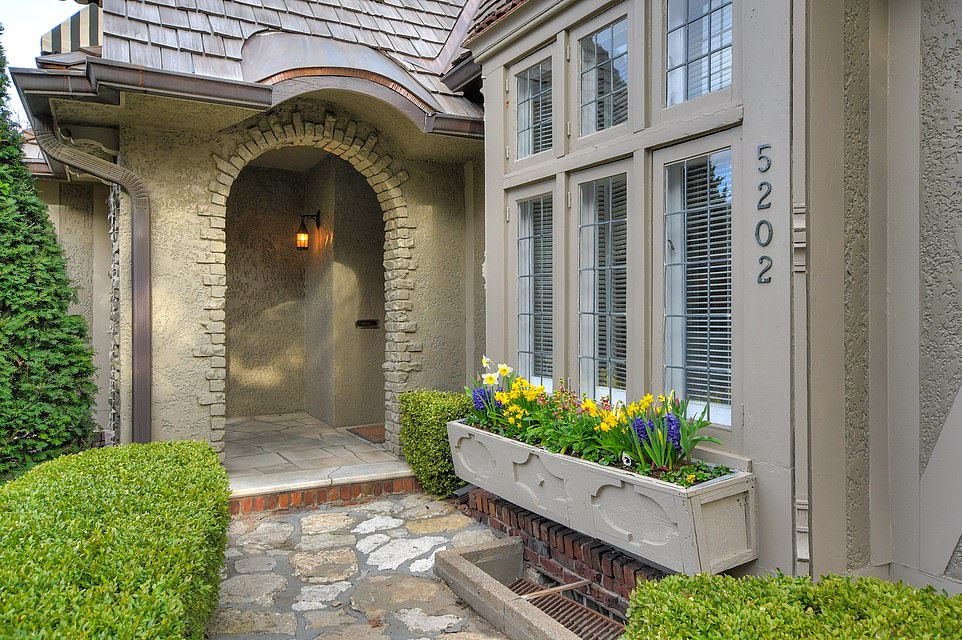 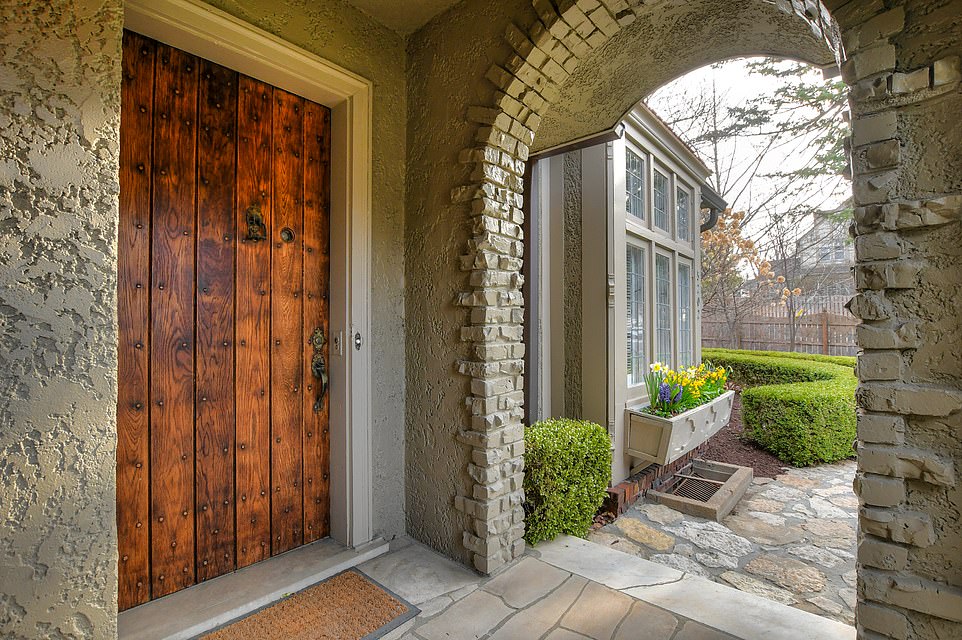 The stone pathway leads to a large, rustic wooden door with a cobblestone path leading up to it 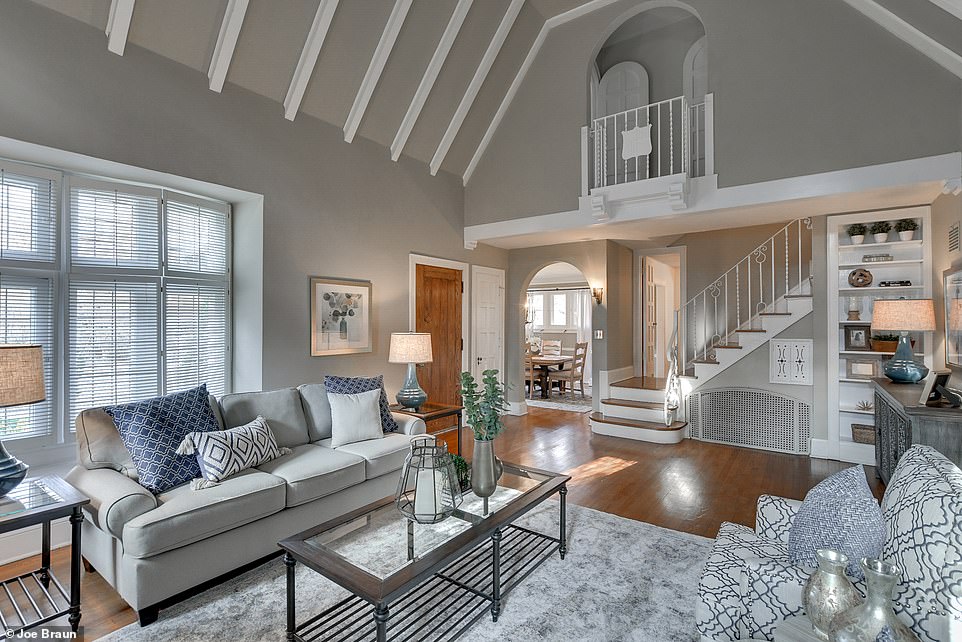 The living room is right off the front door and features lots of natural sunlight and connects to the back patio and has a unique, small indoor balcony 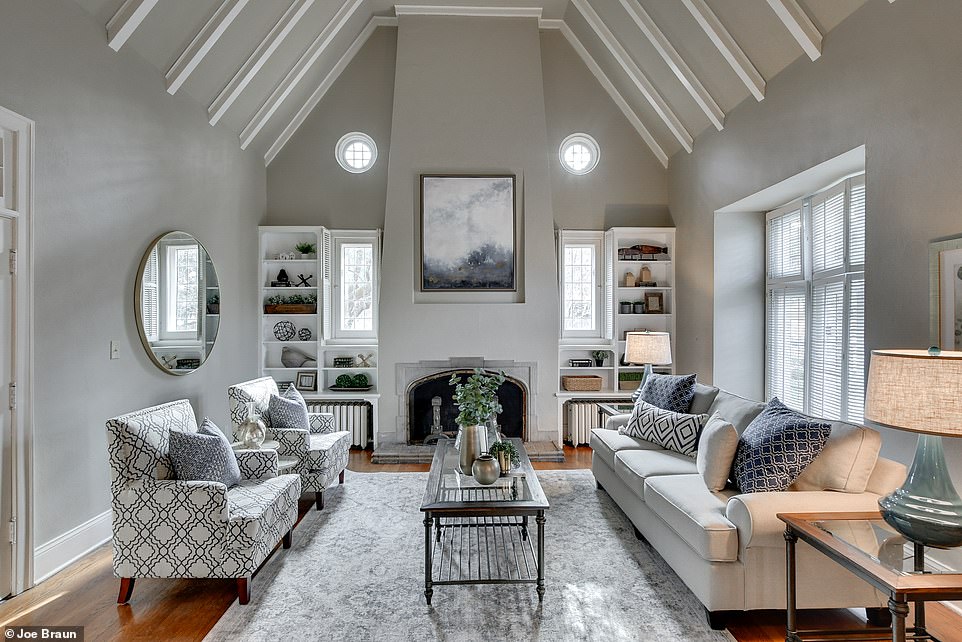 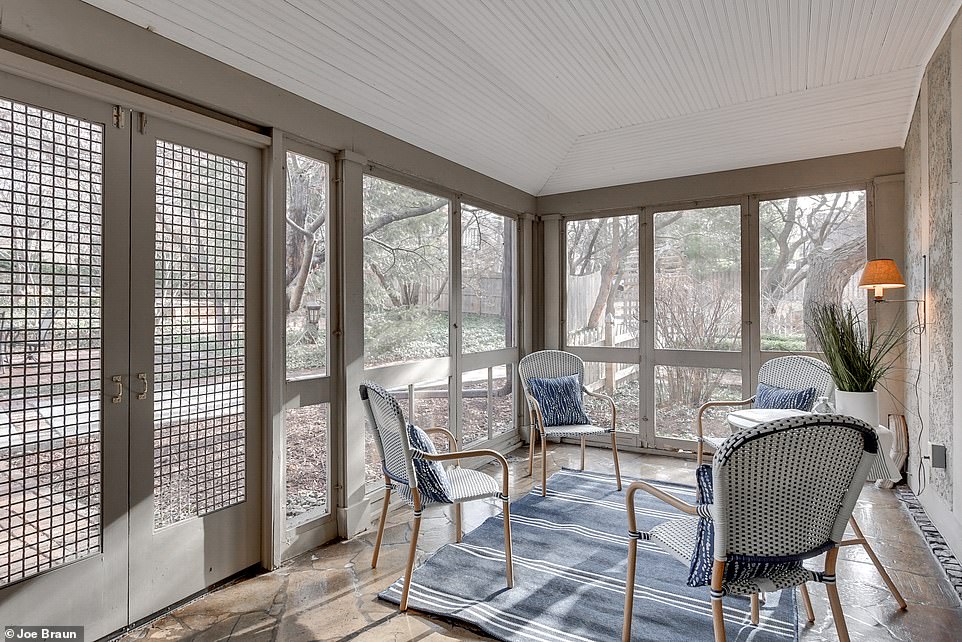 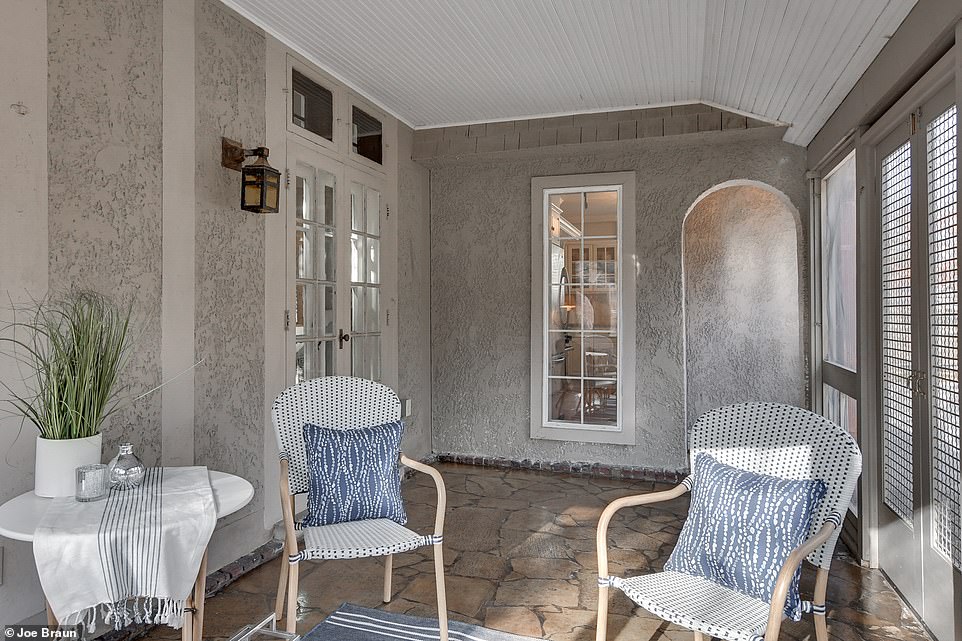 ‘I drove by all the time and admired it. It has this English Tudor cottage look,’ Nancy told the Wall Street Journal. ‘One day I was going to Target and there was a for sale sign in the yard. We were the first ones to show up, and bought it right then and there.’

It wasn’t until 2019 that Monens met Buffett, his then-wife, and their two children after they returned to the property to relive memories and see the room that started it all. Susan had told Nancy – they knew each other through their children’s school – that Warren wanted to see the home again, specifically the sunroom and on a cold February morning, they did just that.

The Monens had made minor improvements to the home, the Wall Street Journal reported and are selling the home as the Omaha market is booming right now.

Dembinski said she believes the new owner will be a citizen of Omaha and isn’t sure how much the billionaire’s ties to the home will influence the sale. 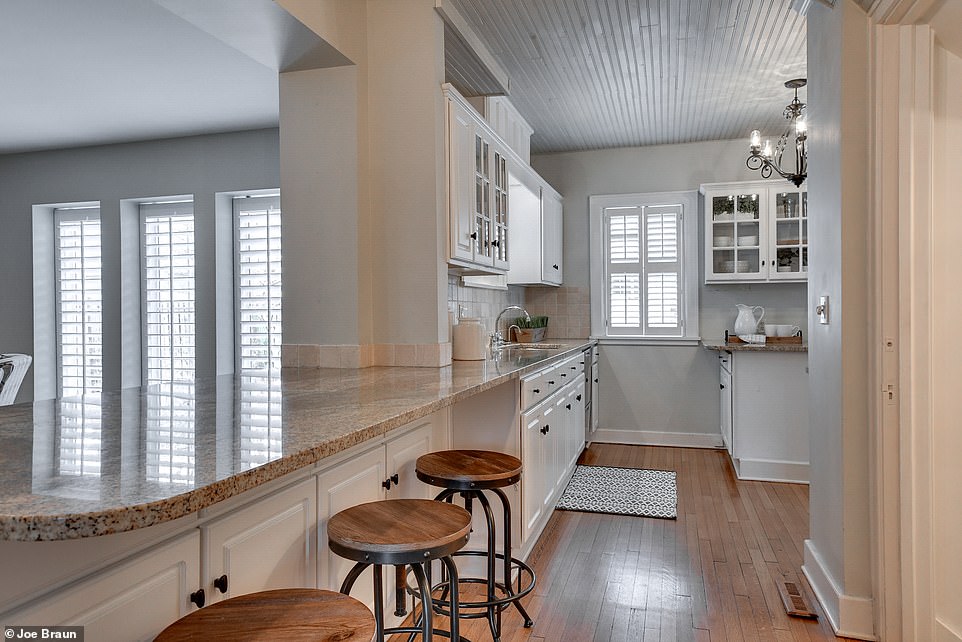 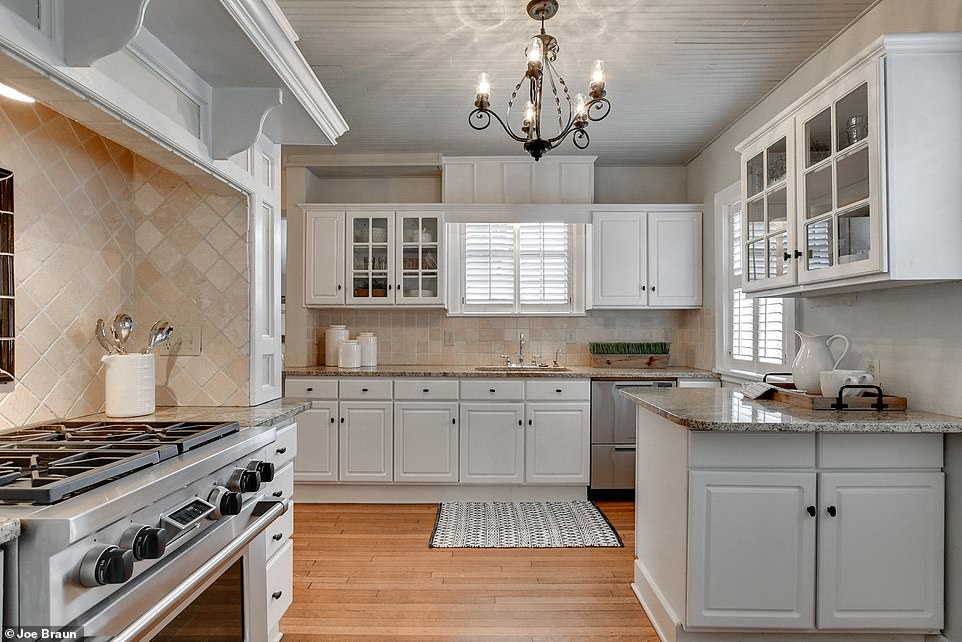 The kitchen features an extra-large stove, a dishwasher, stainless steel sink, and plenty of counter space 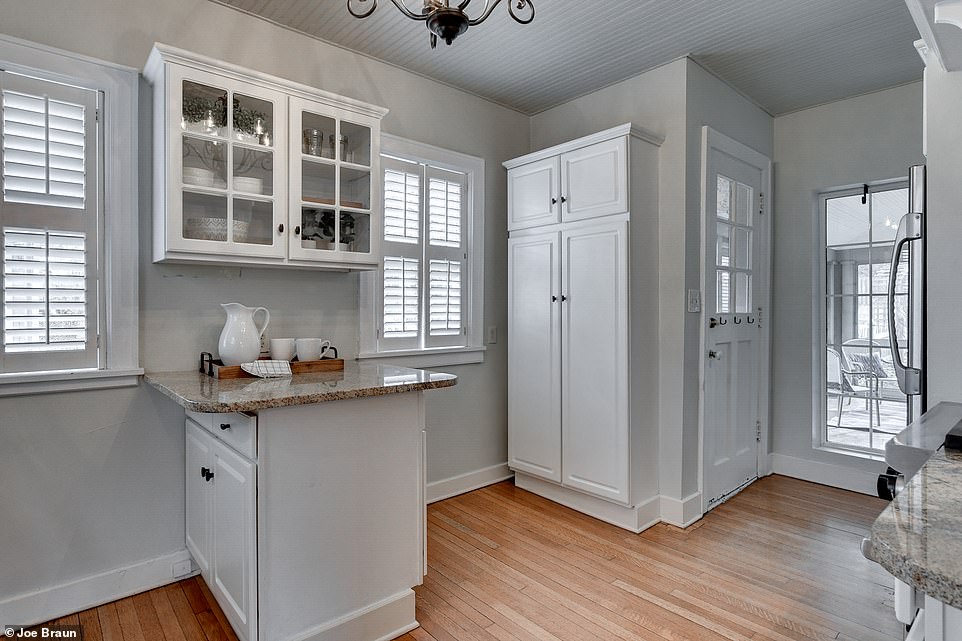 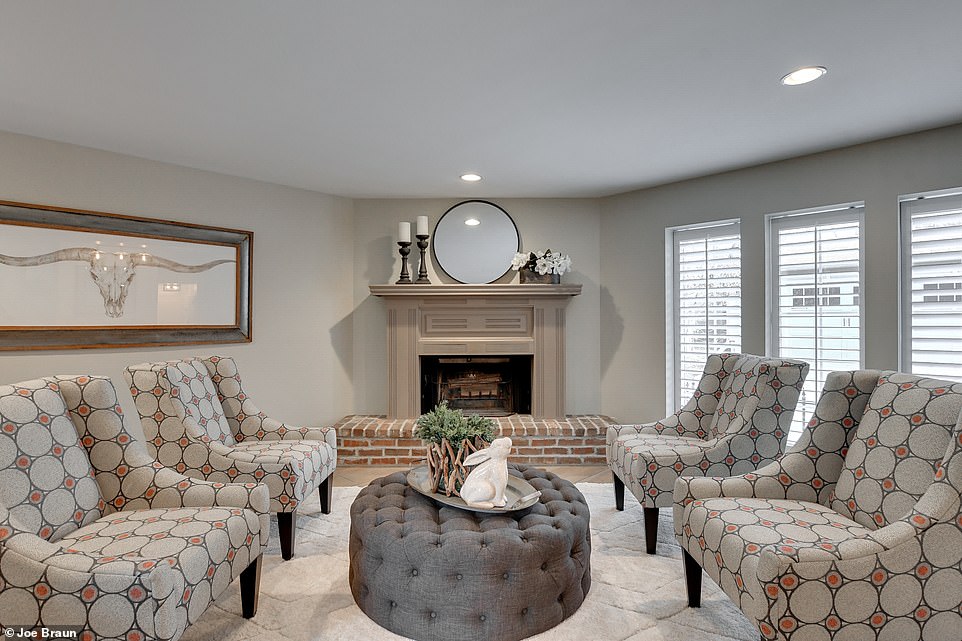 Is the honeymoon officially over for Jennifer Lopez and Ben Affleck?

Maria Menounos, 44, and husband Keven Undergaro, 55, are expecting a child via surrogate

LaKeith Stanfield says he’s engaged to Kasmere Trice amid claims from woman that he...