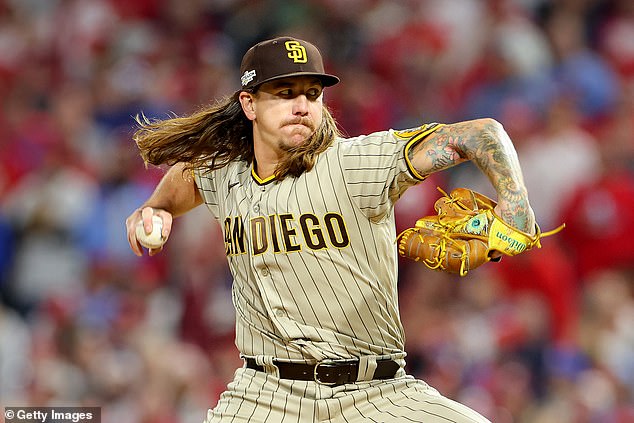 MLB launches probe into White Sox pitcher Mike Clevinger for ‘abusing the mother of his 10-month-old daughter, strangling her, and throwing his chewing tobacco spit onto the child’

Veteran relief pitcher Mike Clevinger is being investigated by Major League Baseball for allegedly abusing the mother of his 10-month-old daughter, including a claim that he strangled the woman and once threw an iPad at her while she was pregnant.

Olivia Finestead made the allegations in a series of social media posts on Tuesday.  She also says that Clevinger ‘threw chew spit on our baby.’

‘I hope the @MLB does what they should and puts him in required therapy maybe even a small suspensions (sic) so he can take time out to really think about why he abuses his kids and their mothers,’ read one post.

The Commissioner’s office has since launched an investigation into the matter, DailyMail.com can confirm.

Veteran relief pitcher Mike Clevinger is being investigated by Major League Baseball for allegedly abusing the mother of his 10-month-old daughter, including a claim that he strangled the woman and once threw an iPad at her while she was pregnant

Clevinger spent most of his career with Cleveland, but has been with the San Diego Padres since 2020. He recently signed with the Chicago White Sox, who were unaware of the allegations until after his acquisition, according to The Athletic.

‘Major League Baseball and the Chicago White Sox take any and all allegations very seriously, and the White Sox are completely supportive of the Joint Domestic Violence, Sexual Assault and Child Abuse policy shared by MLB and the MLBPA,’ the team said in a statement issued to

The allegations against Clevinger come as former Cy Young winner Trevor Bauer remains a free agent after his release from the Los Angeles Dodgers over allegations of abuse.

Bauer was officially released by the club after his unprecedented 324-game ban over sexual misconduct allegations was reduced by an arbitrator.

Los Angeles designated Bauer for assignment on January 6, and he subsequently cleared waivers.

The Dodgers still owe Bauer the remaining $22.5million of his three-year, $102million contract. But even though other MLB clubs can sign him for the league minimum of $720,000, Bauer has remained a free agent following the graphic allegations.

MLB commissioner Rob Manfred suspended Bauer last April for violating the league’s domestic violence and sexual assault policy after a San Diego woman said he beat and sexually abused her in 2021. Bauer has maintained he did nothing wrong, saying that everything that happened between the two was consensual.

He has never been charged with a crime in the matter.

The players’ union filed a grievance on Bauer’s behalf, and a three-man panel headed by arbitrator Martin Scheinman ruled on December 2.

Scheinman concluded Bauer violated MLB’s policy and docked his pay for the first 50 games of 2023, covering part of the period the pitcher was on paid leave in 2021 and 2022.

Bauer joined his hometown Dodgers before the 2021 season and was 8-5 with a 2.59 ERA in 17 starts before being placed on leave.

Missing toddler Quinton Simon’s mother is charged with his murder

Angelyne trailer: Emmy Rossum slips on a blonde wig and a prosthetic chest

Laughter that shows Prince William will be having a VERY happy Father’s Day days...

What Is Financial Reporting? – Definition