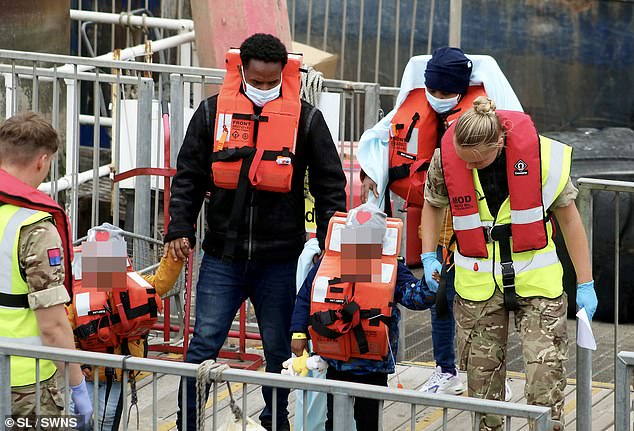 Dozens more migrants including small children clutching teddy bears have arrived in Dover, Kent, as the total number of asylum-seekers crossing the English Channel this year edges close to 12,000.

The young children were seen holding toys as they were carried and escorted from small boats after being intercepted by Border Force vessel Defender shortly after 10.30am.

One man could be seen carrying a smiling toddler as he disembarked the boat.

The small boy – wrapped in a blue blanket and wearing a grey beanie hat reading ‘I love Papa’ – held a pink soft toy in his hand.

Groups of male migrants were escorted by Ministry of Defence officials along with a string of other refugees who also made the dangerous journey from France.

The pair were accompanied by a slightly older toddler who was also clutching a stuffed animal and wearing the same hat.

One child was seen holding a stuffed toy as they arrived on the shores of Dover, Kent, after travelling across the English Channel 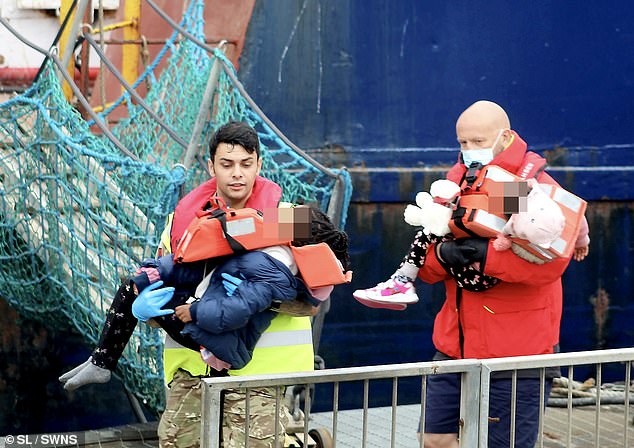 Two children holding toys, who appeared to be sleeping, were carried to safety when their small boat arrived at Dover, Kent, today 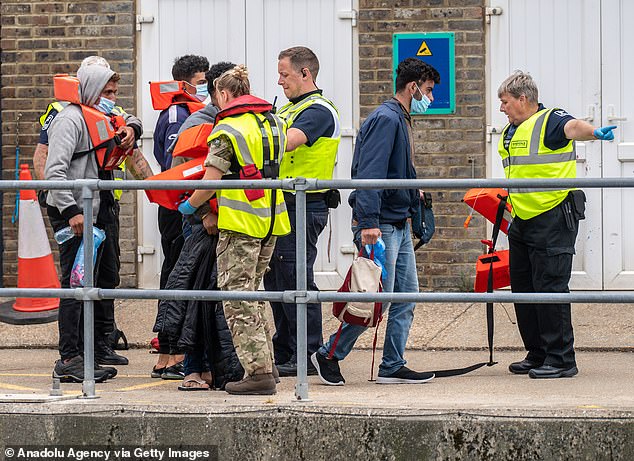 Asylum seekers were directed by Border Force workers at Dover this morning, ahead of forecasted rough seas over the weekend

They were led along the gangway by soldiers dressed in camouflage fatigues and high-vis jackets – closely followed by a third boy of primary-school age.

One man, carrying a child’s rucksack, led a toddler in a yellow jacket along the gangway.

As more migrants waited to be escorted off the boat, one Border Force official could be seen carrying a small girl dressed in pink and holding a white teddy bear, while another cradled a toddler who was clutching a purple octopus toy.

Another young child, who appeared to be sleeping, was carried to safety by a soldier.

After the women and children had been helped down from the boat, a number of young men were led along the walkway.

One migrant carried his belongings in a bin bag.

Their life jackets were removed and their belongings were loaded onto a waiting coach by Border Force staff – ready to transport them to be processed by UK officials.

One migrant, wearing a black Nike jacket, lifted his hand to the sky in a victory gesture as he got ready to disembark the boat, while another raised two fingers towards onlookers in a reverse victory sign.

Another man put his hands together in the shape of a heart as the boat approached British soil, which prompted a fourth migrant to mimic a dove with his hands which represents peace.

Among the group of at least 50 people were a small number of women and children. 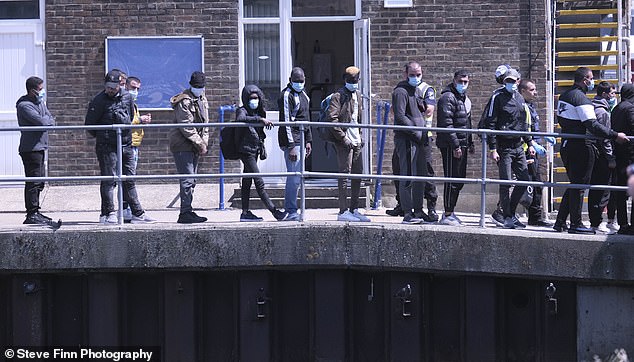 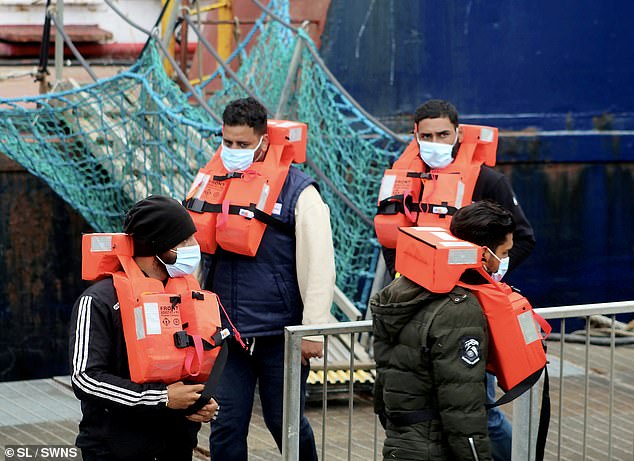 So far this month 2,364 people have reached the UK in 59 dinghies and other small boats – as more migrants landed in Dover this morning 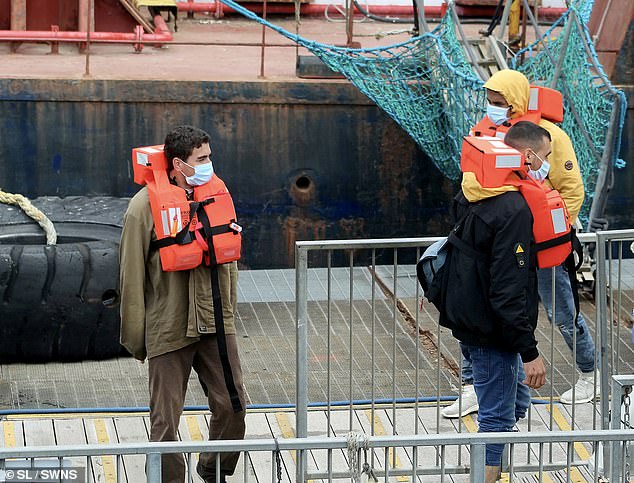 An elderly woman was supported along the gangway by a soldier dressed in a camouflage fatigue and high-vis jacket. She appeared to be limping as she clutched the railings tightly.

Another soldier pushing a man in a wheelchair followed closely behind, along with a paramedic.

This comes as official government figures show that nearly 12,000 migrants have crossed the English Channel by small boat so far this year.

A total of 138 people made the perilous journey in three boats yesterday, bringing the total number of arrivals for 2022 to 11,928 – almost double the 5,906 migrants who arrived in the same period last year.

Despite forecasts of stormy weather at sea, the first group of between 45 and 50 people were brought into Dover, Kent on board Border Force cutter Defender around 8am.

Among them were a small number of women and children.

One woman cradled toddler – wrapped in a red life jacket and blue blanket – in her arms as she disembarked the boat.

While two children could be seen being helped off the vessel by soldiers dressed in camouflage fatigues and high-vis vests. 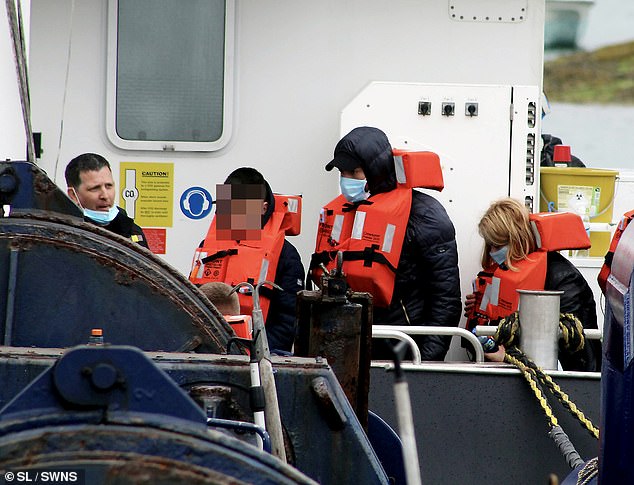 Families, including children, were loaded onto a waiting coach by Border Force staff – ready to transport them to be processed by UK officials 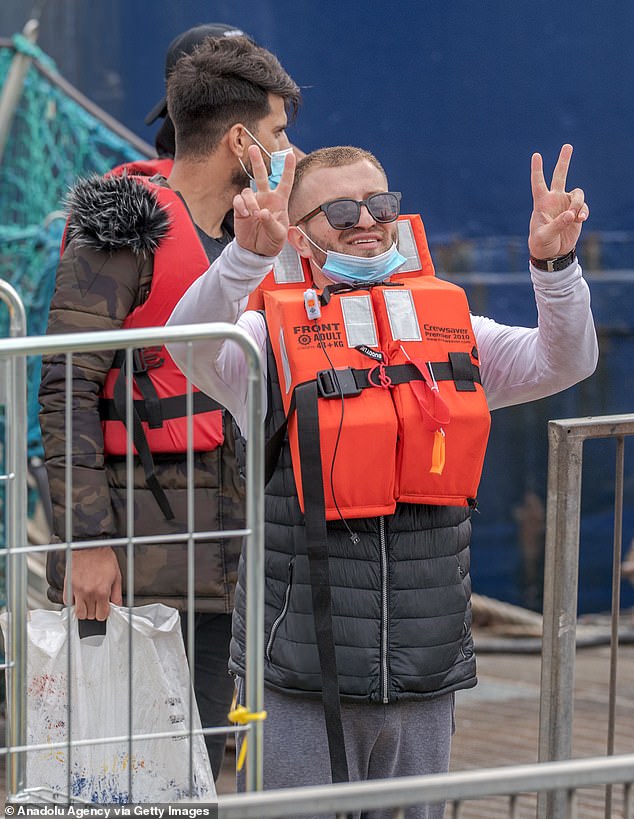 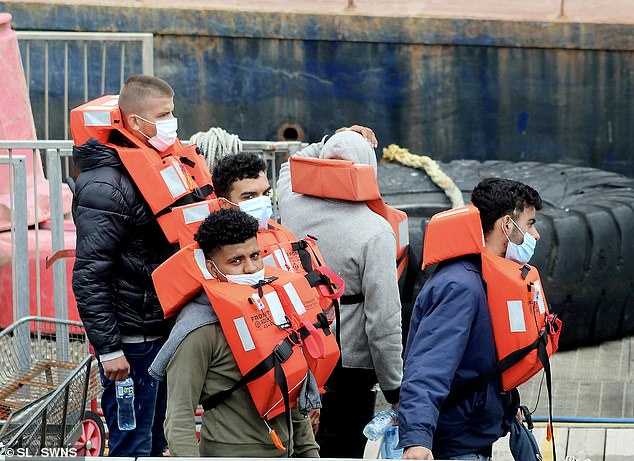 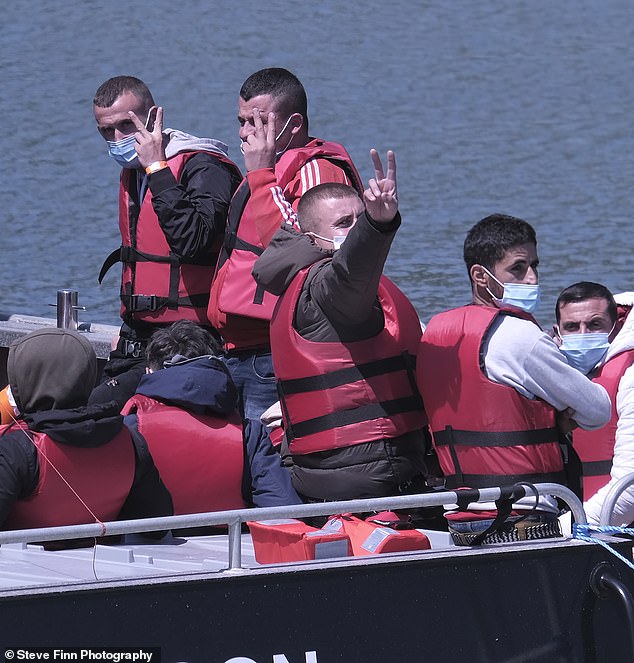 A second group of approximately 50 people were brought into the harbour on board Border Force vessel Ranger around 1pm.

They could be seen wrapped in blue blankets and wearing red hats after battling cold conditions at sea.

The French Regional Operational Centre for Surveillance and Rescue (CROSS) in Gris-Nez also identified a boat in difficulty off the coast of Dunkirk.

The CROSS tasked the French Navy patrol boat Pluvier with rescuing 46 people from the Channel, who were then dropped off at the port of Gravelines.

Once on shore, the stranded migrants were taken care of by the border police and the departmental fire and rescue service.

So far this month 2,364 people have reached the UK in 59 dinghies and other small boats.

The busiest day was on June 14 when 444 people made the treacherous journey across the 21-mile Dover Straits.

‘It’s disappointing that the efforts being made by the Government to save lives and stop the people traffickers are being undermined by people who should know better.

‘They should think again and support the action being taken to bring these treacherous journeys to an end.

‘Let’s not forget that these criminal smuggling gangs have a callous disregard for everyone.

‘Too many lives have been lost in doomed attempts to cross the English Channel. It needs to end.’

US actor Kevin Spacey, 62, is charged with four counts of sexual assault