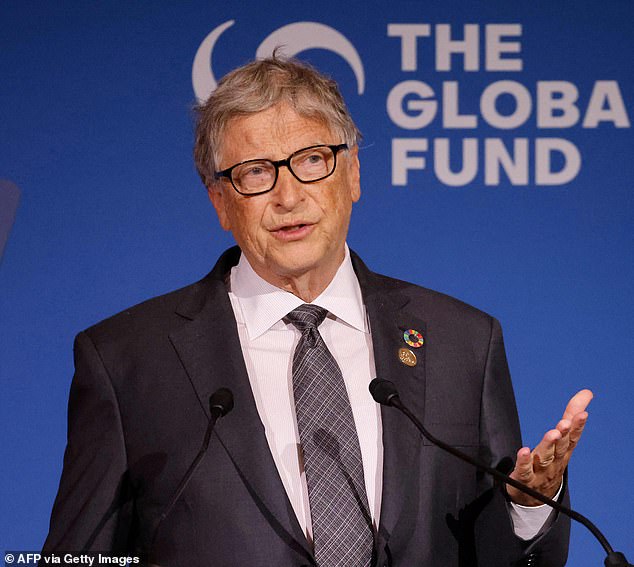 Microsoft has released a new 50-page report that details the company’s plans to combat workplace harassment and discrimination in the wake of Bill Gates‘ removal from the tech giant after he was accused of inappropriate behavior.

As part of the new policies, senior management at the company are required to disclose their consensual relationships with subordinates.

The report, which was compiled by law-firm ArentFox Schiff LLP, includes 11 specific recommendations to be implemented across the company.

The new policy will see Microsoft release an annual report detailing each harassment and discrimination investigation that takes place within the company.

They include revising the companies harassment and discrimination policies, as well as making it publicly known that ‘senior leaders’ are being held accountable.

One section reads: ‘There is and has been a perception among some employees that the Company tolerates and to some degree protects high performing senior executives who may be engaging in inappropriate conduct.’ 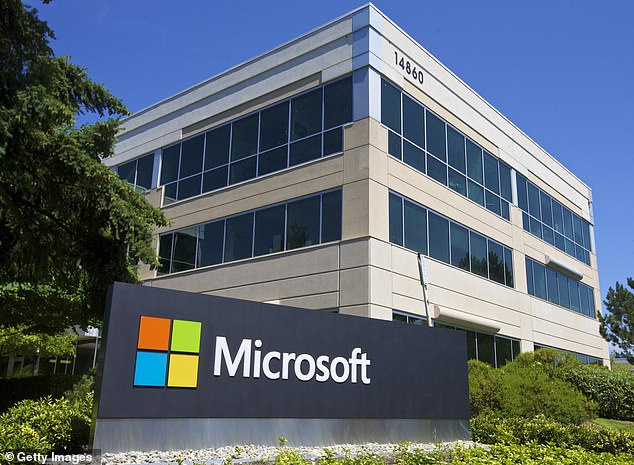 The Microsoft Board of Directors has approved the steps outlined in the ArentFox Schiff report. The company announced the approval in a blog post.

Another section in the report recaps the allegations made against Bill Gates in 2019 by a former Microsoft employee who is identified as ‘Person B.’ The report does not reveal any new details about those allegations.

The company has been swamped with sexual harassment allegations against Gates going back to 2000.

He stepped down from the company amid an investigation into one of his relationships with a former employee in 2020, and on May 3, 2021, he announced his divorce to his longtime wife, Melinda French Gates.

A few weeks later, The New York Times published an expose detailing how Gates sexually harassed several of his employees and remained a loyal friend to pedophile Jeffrey Epstein three years after he was convicted of soliciting prostitution from a minor.

The report also mentions a May 2022 Business Insider article that detailed several senior executives at the company who had engaged in ‘inappropriate conduct.’ 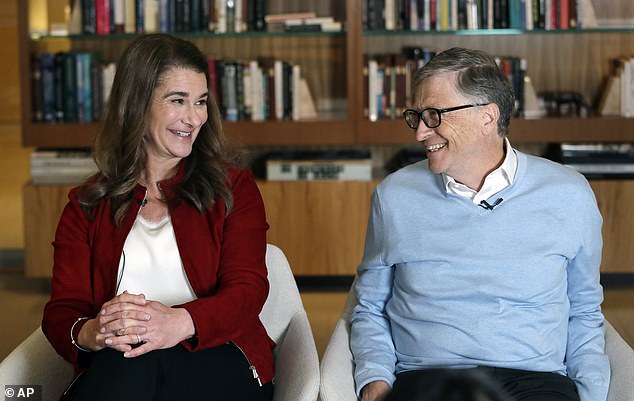 Founder Bill Gates met and married Melinda French Gates, left, when she was working as a product manager for the company right out of college 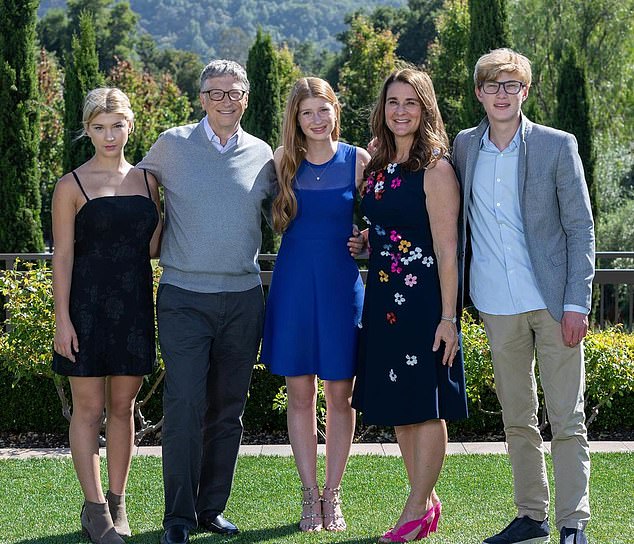 Gates is pictured with his ex-wife Melinda, second from right, and their three children

According to ArentFox Schiff report, the law firm reviewed the effectiveness of the companies anti-harassment and anti-discrimination policies that already in place.

The investigation also looked into all 489 reports made regarding harassment and discrimination complaints made at the company between 2019 and 2021. Most of those claims came from Microsoft’s engineering and sales departments.

ArentFox Schiff found that most investigations were conducted in a timely and professional manner.

The law firm went on to interview a sampling of sexual harassment and discrimination complainants to get their opinions on the process.

In a blog post, CEO Satya Nadella said: ‘Cultivating a culture where everyone is empowered to do meaningful work and can thrive is our greatest responsibility at Microsoft.’

Nadella continued: ‘The Board of Directors has taken this investigation seriously and the resulting comprehensive report outlines important areas where we can continue to improve, as well as progress we’ve made. The Board of Directors and our senior leaders are fully committed to this implementation plan as we continually work to close the gap between our espoused culture and the lived experience of our employees.’

The company plans to regularly revise their new policies and to encourage employees to come forward with ‘certain’ consensual workplace relationships.

The board of directors said that the new policies will ‘not only address the specific concerns raised by ArentFox’s review, but will also allow [the company] to build a stronger, more inclusive and equitable work environment for our employees moving forward.’ 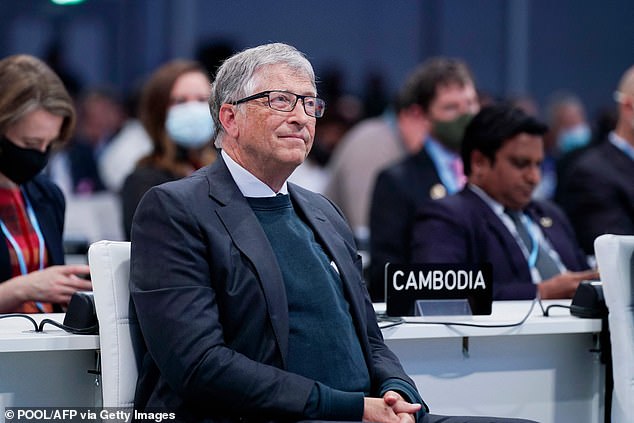 The report went on to mention the pay disparity within the company between men and women. According to data from Microsoft, women make ten percent less than men.

Another section says that in some instances women said human resources encouraged them to not make formal complaints.

One witness is quoted as saying: ‘It makes no sense that they found a pattern of bad behavior but told me my complaint couldn’t be substantiated because he treated everyone that way instead of just some people.’

2. Establish a Formal Procedure to Request Reconsideration of an Investigation’s Findings

4. Develop an Effective Tool to Remind Employees They Need to Take Required Trainings

5. Advise Employees of their Rights to Seek External Relief

6. Ask Complainants to Complete Surveys About Their Investigation Experience

8. Take Steps to Minimize Perception that Senior Leaders Are Not Held Accountable

11. Continue Efforts to Increase the Percentage of Women in Leadership Positions

The move to hire an independent firm to review the company’s investigations after after activist shareholders demanded greater disclosure of the company’s handling of sexual harassment issues.

A resolution seeking greater transparency passed in November with support from almost 78 percent of the shareholders in November, The New York Times reported.

Gates has been accused of soliciting at least two employees while he was running the tech giant, according to The Times.

In at least one instance, in 2007, it reports that Gates sat through a presentation by a Microsoft employee then promptly emailed her asking for a date. He reportedly wrote: ‘If this makes you uncomfortable, pretend it never happened.’

Microsoft executives then reportedly warned Gates not to do things like that.

But at a cocktail party on a work trip years later, Gates allegedly asked a woman who worked for him to dinner.

Then in 2019, Microsoft’s board received a letter from an engineer claiming to have had a relationship with Gates in 2000 that lasted for several years.

Gates also met his ex-wife, Melinda French Gates, when she joined the company as a product manager straight out of college. He asked her out one day in the company parking lot, Insider reports.

In an interview with Today in May, Gates spoke candidly about the behavior that led to the end of his marriage.

He said: ‘The divorce is definitely a sad thing. I have responsibility for causing a lot of pain to my family. It was a tough year. I feel good that all of us are moving forward now.’

The one-time world’s wealthiest man said: ‘Melinda and I are continuing to work together. It was sad and tragic, but now we’re moving together.’

When pressed for more information on his affair, Gates said: ‘I don’t think delving into the particulars at this point is constructive, but yes, I caused pain and I feel terrible about that.’

While his ex-wife told CBS in March of this year: ‘There just came a point in time where there was enough there that I realized it just wasn’t healthy. I couldn’t trust what we had.’

Gates responded to those comments saying: ‘This was a very tough thing. … We had a lot of amazing things in our marriage. The kids, the foundation, the enjoyment we had. And so it’s a very hard adjustment.’

He added: ‘I know divorces are different, but it’s just a complete change. We were partners, we kind of grew up together, and now that’s different. We’re not married.’

Emily Ratajkowski says she ‘was down to 100 pounds recently’ and ‘it was really, really scary’

A nervous-looking Cody Simpson and Emma McKeon embrace as he learns he’s made the...

Catherine Martin stuns in black sequins at the GQ Men of the Year Awards alongside...

Three suburban New Jersey men tied up a woman they met in a bar...

Polls OPEN on the East Coast in what’s expected to be a blowout Election...