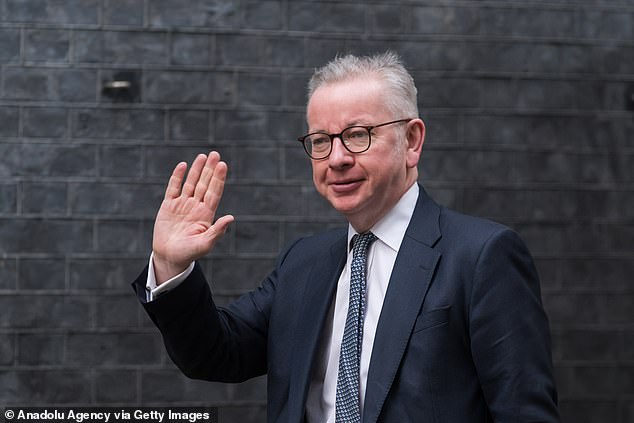 The key Cabinet minister – who blocked Mr Johnson from becoming PM in 2016 – said he should ‘fight and win’ the next election despite a trickle of Tory MPs withdrawing support.

Mr Gove argued that ‘no one in Government has his energy, his determination, his vision’ as he urged rebels to quieten down.

Meanwhile, Northern Ireland Secretary Brandon Lewis insisted Mr Johnson will not face a confidence vote because it is ‘not in anybody’s interests’.

The interventions came as No10 denied pushing top civil servant Ms Gray to remove details about partying from her verdict last week.

The report painted a damning picture of drunken staff doing karaoke, fighting and vomiting in offices while the rest of the country was under a brutal lockdown.

However, it also stopped short of personal condemnation of the PM’s behaviour – after police decided he only deserved a single fine for a low-key birthday celebration in the Cabinet Room in June 2020. 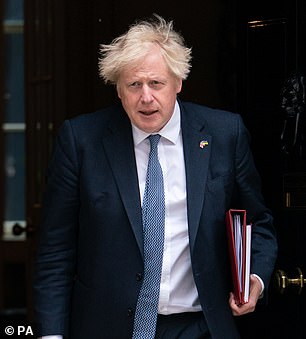 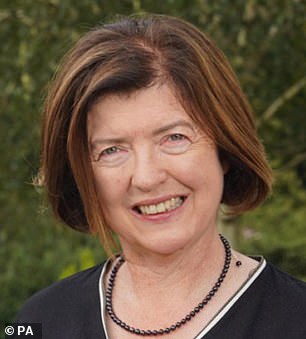 Sue Gray (right) painted a damning picture of drunken staff doing karaoke, fighting and vomiting in offices while the rest of the country was under a brutal lockdown. However, it also stopped short of personal condemnation of Boris Johnson (left) behaviour 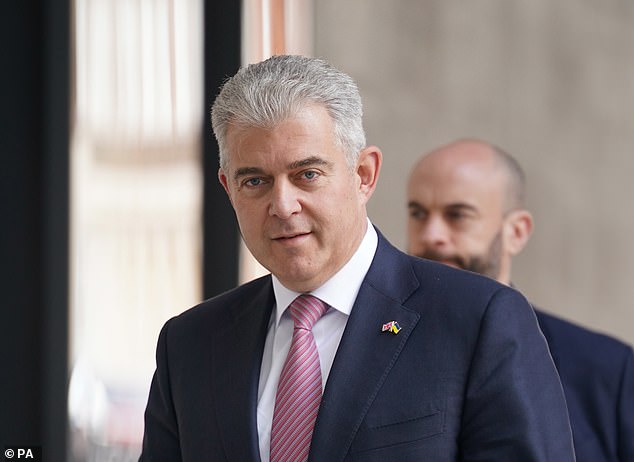 Mr Brine said of Partygate: ‘I have said throughout this sorry saga I cannot and will not defend the indefensible. Rule makers cannot be law-breakers.’

Newton Abbot MP Anne Marie Morris was also confirmed as one of the letter writers after revealing she has had the Tory whip restored, four months after it was removed for her support of an Opposition move to cut VAT on energy bills.

Former Minister Bob Neill has also called for Mr Johnson to quit saying: ‘It is in the national interest that the Conservatives win the next Election, but it requires a change of leader for us to do so.’

Trade Minister Penny Mordaunt, considered a potential future Tory leadership contender, condemned behaviour at No 10 as ‘shameful’, telling the Portsmouth News she was ‘angry’ that people blocking ‘reasonable requests to relax [Covid] restrictions, were at the same time ignoring the rules.’

Sir Graham Brady, chairman of the 1922 Committee of backbench Tories, is obliged to order a confidence vote if he receives 54 letters demanding one.

More than 20 MPs have publicly stated that they no longer support Mr Johnson but the actual number of letter writers may be higher given it is a secret process. Sir Graham takes pride in never revealing how many letters he has received.

Mr Johnson’s allies suspect that the timing of the letters is being co-ordinated by supporters of former rival Jeremy Hunt.

Many rebels are waiting for the results of the crunch by-elections in Wakefield and in Tiverton and Honiton on June 23 before deciding whether to send letters of no confidence.

Yesterday, a poll suggested that if an Election was held now, the Tories would lose all but three of the 88 battleground seats they hold by a slim majority over Labour. Even Mr Johnson’s seat of Uxbridge and South Ruislip would fall.

In an interview on Sky News this morning, Mr Lewis played down the prospects of Mr Johnson facing a full confidence vote.

He told the Sophy Ridge On Sunday programme: ‘I don’t think he will actually.

‘I’ve seen this from both sides, I don’t think it is in anybody’s interest.

‘No, I don’t think we will see that happen.’

Mr Lewis also said he was ‘absolutely confident’ Ms Gray would not have been influenced on the kind of report she released.

‘Anybody who has worked in No 10 knows Sue Gray well enough that that kind of thing wouldn’t work,’ he said.

‘And I’m confident, particularly now that No 10 have outrightly made the point and denied that this happened, that Sue Gray had the freedom to write the report that she was comfortable to write and publish.’

The Sunday Times reported that Ms Gray had pressure placed on her by senior members of Mr Johnson’s team to remove details and names.

A so-called ‘Abba party’ held in the Prime Minister’s flat on November 13 2020 was said to have been ‘tweaked’ by Mr Johnson’s chief-of-staff Steve Barclay on the eve of publication.

It is alleged an earlier draft of Ms Gray’s report referred to music being played and stated at what time the gathering ended, but that the information was redacted.

But No10 and Cabinet Office sources denied that any edits were made by Mr Barclay, who is also the Chancellor of the Duchy of Lancaster.

A No 10 source said: ‘It is untrue that anyone on the political side saw anything in advance or sought to influence it.’

The Cabinet Office rejected claims that the report was edited due to pressure or that any events were not investigated because of requests made by senior figures.

They referred back to the wording of the report where Ms Gray explained her rationale for halting her probe into what happened in the flat Mr Johnson shares with his wife Carrie.

Ms Gray found the PM did attend the mid-lockdown gathering along with five special advisers, with ‘food and alcohol available’.

However, she halted her work having only collected ‘limited’ information when the Metropolitan Police began their investigation.

There was no mention in her report of The Winner Takes It All and other Abba songs reportedly heard blaring from the Downing Street residence after the departure of Dominic Cummings, who was formerly the PM’s chief adviser, was announced amid a bitter power struggle.

Carrie Johnson was reportedly at the November event but was not named by Ms Gray in relation to the flat gathering.

The official said she had not long been investigating the evening when Scotland Yard began its criminal investigation and, once the police work was complete, ‘concluded it was not appropriate or proportionate’ to advance her own inquiries. 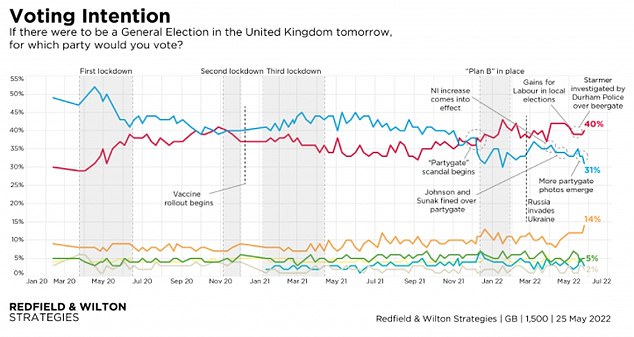 Mr Johnson, who was handed a fixed-penalty notice for attending his own surprise birthday bash in June 2020 but not for any other event investigated by police, has been questioned both by MPs and journalists about whether members of his team sought to influence or edit parts of the report in relation to the No 11 flat gathering.

The Prime Minister told a press briefing on Wednesday: ‘The first I saw the report and read it in its entirety – and, to the best of my knowledge, the first any of my team saw it – was when we got it shortly after 10am this morning.

‘The event in question was a work meeting and … the Metropolitan Police did investigate and that was certainly the outcome of their investigation.’

The Sunday Times also suggested that senior civil servants – including the head of the civil service Simon Case, No 10 permanent secretary Samantha Jones and Alex Chisholm, permanent secretary in the Cabinet Office – lobbied Ms Gray to persuade her not to name individuals who attended the gatherings.

But the Cabinet Office pointed to the fact that Ms Gray ended up naming a host of senior figures, such as the PM’s former principal private secretary Martin Reynolds who arranged the ‘bring your own booze’ No 10 garden party in May 2020 as evidence that she did not hold back.