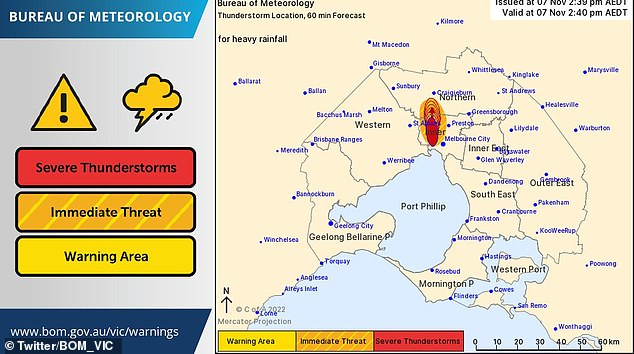 Melbourne has been placed on high alert with a severe thunderstorm set to strike the city, bringing heavy rain.

The BOM issued an alert at 2.39pm on Monday warning that severe, slow-moving thunderstorms had been detected on the weather radar near Essendon and Footscray in the city’s north.

The storms are forecast to hit Broadmeadows, Coburg and Fawkner by 3:10pm and Craigieburn and Tullamarine by 3:40pm, the warning said.

‘Heavy rainfall that may lead to flash flooding is likely,’ a statement said.

Slow-moving thunderstorms are set to strike Melbourne imminently, according to the Bureau of Meteorology

Severe thunderstorm warnings have also been issued for those living in Central and East Gippsland.

Those in the areas have been told to brace for heavy rain with flash flooding possible.

Influencer apologizes for video of her branding man who tried to help her at...