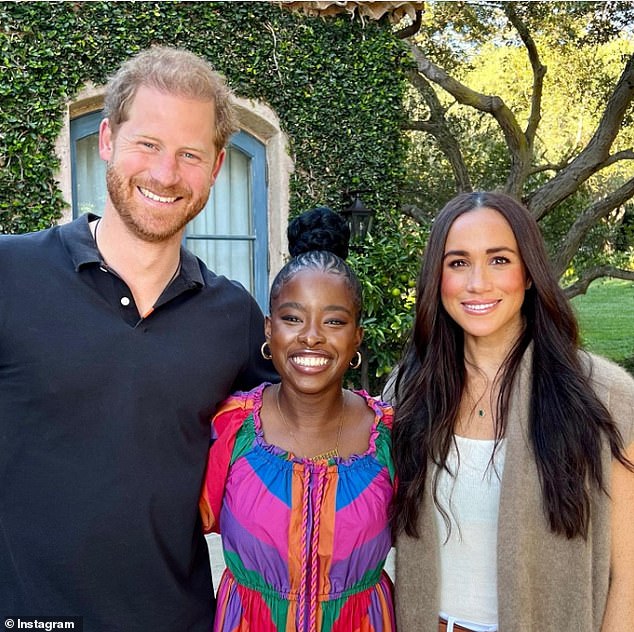 Meghan Markle and Prince Harry have posed for a photograph with ‘beyond thrilled’ Archetypes podcast guest and American poet Amanda Gorman.

The Duke, 38, and the Duchess, 41, of Sussex, who are now based in a £11million mansion in Montecito, California, were all smiles in the picture, which was shared to Amanda’s Instagram account yesterday.

Inaugural poet and activist Amanda, 24, shot to fame with her history-making performance at Joe Biden‘s ceremony in January 2021.

She appeared on the latest episode of Meghan’s Archetypes podcast – released on Tuesday on Spotify and titled ‘Beyond the Archetype: Human, Being’ – to discuss the ‘power that women possess as change-makers’.

The Duchess of Sussex’s newest Archetypes episode was released on Tuesday. It’s entitled ‘Beyond the Archetype: Human, Being’

She cinched her waist with an elegant brown belt, while adding a touch of glitz to her ensemble with a dainty emerald necklace.

Her hair was left straight and down for the meeting with Amanda, while she sported a smattering of glamorous makeup.

Meghan’s husband Harry beamed for the camera, dressed in a simple blue shirt, which was set outside in front of a building covered with greenery.

Amanda, meanwhile, commanded attention in a colourful outfit, paired with a golden necklace and hoop earrings. 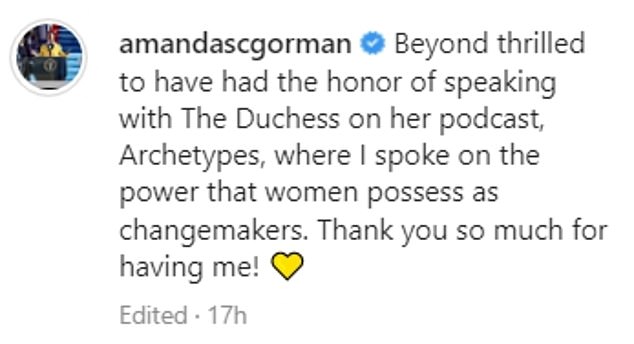 The picture was posted with the caption: ‘Beyond thrilled to have had the honor of speaking with The Duchess on her podcast, Archetypes, where I spoke on the power that women possess as changemakers. Thank you so much for having me!’

During the podcast, Meghan spoke of how female sexuality ‘is so much more vilified’ than men’s and even women in their 50s can be targeted by gossip about how they were ‘a sl*t in college’.

While men are described as ‘players’, women are mocked for their sexual behaviour, the Duchess said in the latest episode.

Meghan’s comments came during a discussion with trans actress and singer Michaela Jaé Rodriguez on experiences during her teenage years.

The Duchess of Sussex was joined by Sex and the City author Candace Bushnell and trans actress Michaela Jaé Rodriguez for a conversation ‘about expressing one’s identity and embracing the nuances that make each of us, quite simply, human’

‘As you’re getting older, you’re exploring and starting to understand your sensuality, your feminine divine,’ the Duchess said.

‘But your sexuality can be very much used against you… [a man] is a player or out having fun or whatever he’s doing, it’s often celebrated, even heralded.

‘But for a woman, I don’t care if she is perhaps the most successful woman in finance in her mid-50s, I promise you someone will still come and say ”yeah, but she was such a sl*t in college”.

By Claire Toureille for MailOnline

Meghan Markle admitted her mother still calls her her ‘Flower,’ even though she is 41.

The mother-of-two opened up about her mother Doria Ragland on her podcast Archetypes.

Speaking about the importance of nicknames with the Pose actress Michaela Jae Rodriguez, she admitted that Doria still calls her by the nickname she came up for her as a child.

Meghan revealed she had no problem with the nickname, instead saying she loves it. Michaela, a transgender woman, was discussing the way in which people get ‘stuck’ with nicknames throughout their lives.

‘As a child, you come up with nicknames but you don’t know how much of an impact they have on other people,’ she said. ‘And also how people get stuck in that nickname. They get stuck in the name that, you know, they’ve been calling you,’ she added.

‘My mom used to call me Bumper, when I was a child, she still slips up and calls me that today, which I have no problem with because, you know, who doesn’t like being caught by their mom,’ the actress went on.

Meghan interjected with a chuckle: ‘Yes, exactly. My mom still calls me Flower. ‘Don’t you love it, though? ‘ Michaela asked her.

The Duchess of Sussex’s nickname first came to light in the now defunct blog The Tig, where she mentioned it was flower.

It resurfaced in 2019, when her uncle Joseph Johnson shared it with the press when he opened up about the day Doria learned Meghan was engaged to Prince Harry.

The 59-year-old told MailOnline: ‘All of us were just really, really stunned. Shocked. Especially Doria. She was so excited. She was just saying “My little Flower!” How can this be true? Unbelievable. She said: “My Flower’s going to be a Princess, wooh-wooh-wooh!”‘

Earlier this year, it appeared that Doria had gotten a floral tattoo on her arm as well.

The social worker showed off her new ink on her 66th birthday in September as she walked her two dogs near her LA home.

Doria and Meghan are very close, and Doria made another cameo on her daughter’s podcast earlier this year, when she FaceTimed her while she was recording.

‘It will stick with her. I don’t understand what it is about the stigma surrounding women and their sexuality, the exploration of their sexuality that is so much more vilified than for a man.’

Meghan also revealed she owns a piece of art bearing the words ‘human kind – be both’ and surprised students in her old high school.

In addition, the Duchess spoke to Sex and the City author Candace Bushnell about how women were treated in the entertainment industry.

Following another conversation with the poet Amanda, Meghan described how her guests had made her feel.

‘I find it so inspiring to listen to women who are clear on who they are – unwavering, not waffling, confident, in spite of whatever barriers they may have seen in the foreground,’ she said.

‘And as I thought about closing this episode, how I could just bottle up that feeling, that inspiring feeling of liberation, when you shed all those fears of judgment [and] you sit in your authenticity. When you allow yourself to be human and to be.’

Rounding off the episode with a quote from a poem, she adds: ‘And where there is woman, there is forever a way. Truer words have never been spoken.’

Meghan tells listeners she wants to revisit a major part of her ‘origin story’, Immaculate Heart High School in LA.

‘I wanted to explore these labels and boxes are part of the self-identification for the young women there,’ she says. ‘Or if they’ve given themselves the space to be a human.’

As the duchess walks back into the school, she describes how the memories were coming ‘flooding back’.

‘It’s so great because as an adult you come back into this environment, it feels so small, but when you’re in high school this campus was so big.

‘Middle school and high school is a really big time for anyone in their life. You’re so impressionable and you also think you know everything when you’re a teenager.

‘But for young women especially this is the time period in which you sort of start to look around. Around the culture and society, the messages you’re receiving, and you ask yourself constantly, how am I supposed to be?

‘At least that was very much my experience of adolescence and maybe, maybe things have changed.’

Meghan is heard chatting with three young women who had just graduated – Abigail, Diana and Grace.

Asking which labels they felt were applied to them, one of them replied, ‘the b-word’, while another said, ‘bossy’.

After one of them replies that they’ve only ever heard the word on TikTok, Meghan says: ‘I mean talk about aging myself, but this idea of the bimbo, the dumb blond, this was something that I grew up seeing all the time, and here we go, they hadn’t.’

The royal then tells the group how she once received a religious studies assignment at school to plan her own wedding.

‘That’s insane,’ one of them replies.

Meghan then has a conversation with Dr Shefali Tsabary, an expert in family dynamics and personal development.