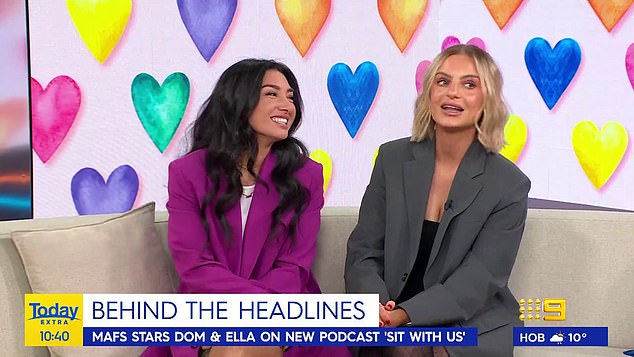 Married At First Sight star Domenica Calarco has come out swinging at former co-stars Mitch Eynaud and Tamara Djordjevic amid reports they are secretly dating.

The OnlyFans star, 28, was quizzed on Mitch and Tamara’s alleged relationship while promoting her new Sit With Us podcast with best friend Ella Ding, 29, on Wednesday’s episode of Today Extra.

Ella’s ‘husband’ Mitch was embroiled in a cheating scandal at the MAFS reunion in March after it was alleged Tamara tried to ‘pick him up’ during filming via text message.

Tamara and Mitch have since denied the romance rumours, telling fans they are simply ‘good friends’.

When asked by co-host David Campbell what she thought of Mitch and Tamara, however, Ella gave very diplomatic response.

‘I don’t fellow either of them on socials,’ she shrugged, adding: ‘I cut that off as soon as we could get back our [Instagrams] I didn’t really want to see it.’ 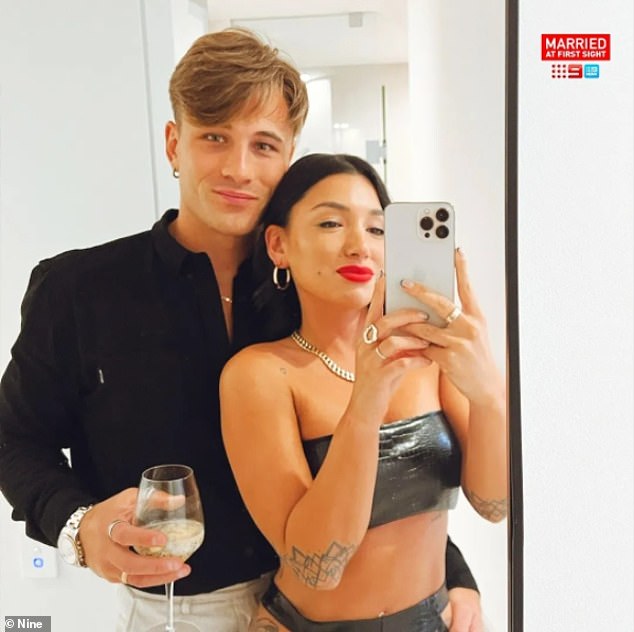 Twist: Ella’s ‘husband’ Mitch (left) was embroiled in a cheating scandal at the MAFS reunion in March after it was alleged Tamara tried to ‘pick him up’ during filming via text message

‘But they haven’t confirmed they’re official or anything… I don’t really know,’ she continued, before insisting that she ‘doesn’t mind’ whether they are together.

Domencia however chose not to mince words, insisting that Mitch and Tamara’s behaviour was unacceptable.

‘Ella is so much better at this than I am. I’m just kind of like, ‘Eh, see ya!’ You know what I mean? What they’ve said and done after the show and the way that they’ve treated Ella and her feelings, I just… as a friend, I’m like, ‘Don’t do that to my friend!” 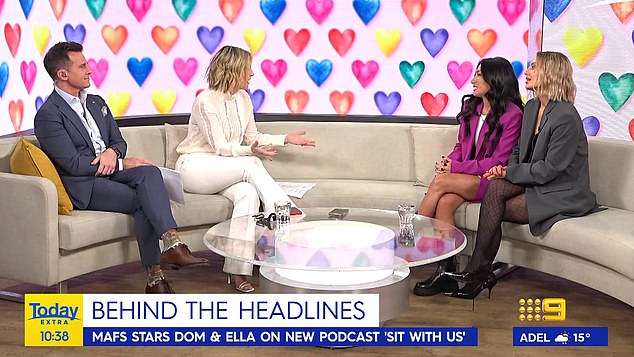 ‘I don’t care’: When asked by co-host David Campbell what she thought of Mitch and Tamara, however, Ella gave very diplomatic response 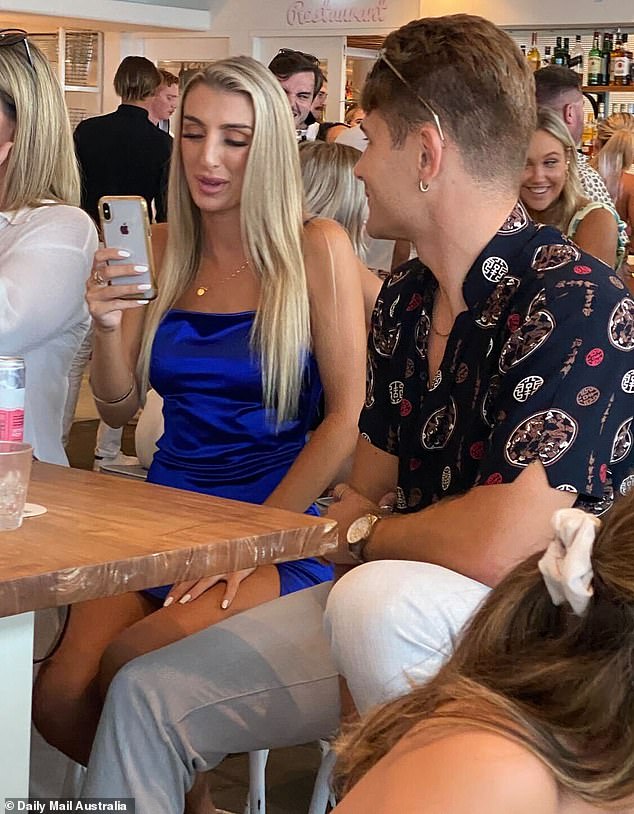 Speculation: Tamara (left), a real estate operations manager, sparked recoupling rumours with financial planner Mitch in February after they were pictured getting cosy at a Gold Coast bar

‘I’m a pretty staunch supporter of my girl here. I don’t like some of the things that have been said. I’m quite vocal,’ she added.

Domenica and Ella are arguably the most successful stars to have come out of the latest season of MAFS.

Over the weekend, their Sit With Us podcast reached the number one spot on Spotify Australia’s Top Podcasts ranking – surpassing Hamish & Andy who have over 960,000 monthly listeners and more than two million monthly downloads.  ‘as a friend, I’m like, ‘Don’t do that to my friend!” 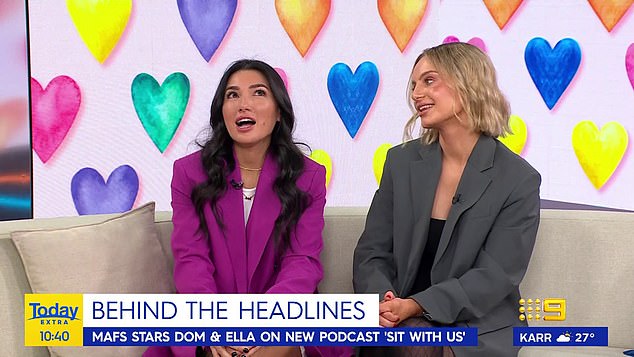 ‘Don’t do that to my friend!’ Domencia however chose not to mince words, insisting that Mitch and Tamara’s behaviour was unacceptable 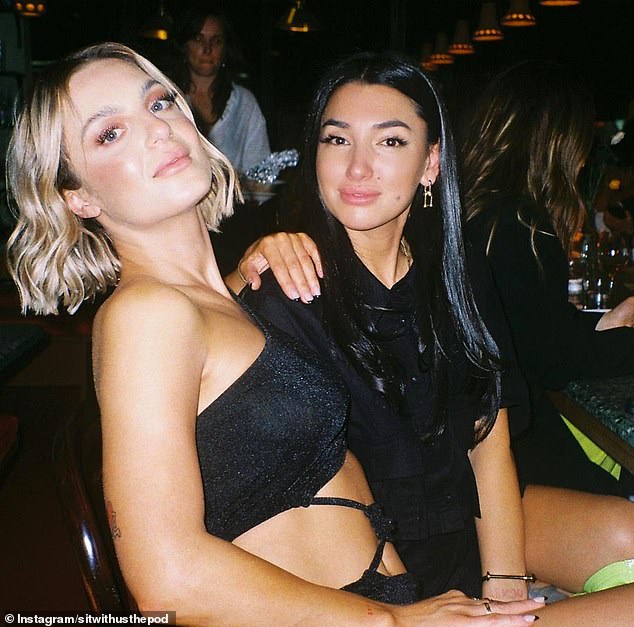 Popular: Ella and Domenica just launched a podcast called Sit With Us, which topped the charts when its trailer was released last week. The first episode dropped on Wednesday morning

Domenica also recently launched a fashion range with Showpo and has enlisted celebrity agent Sharon Finnigan, who represents the likes of Jasmine Stefanovic and Phoebe Burgess, to manage her.

According to an insider, Domenica has attended a series of meetings with Sharon and expressed her desire to launch her own podcast and makeup range.

‘They think she is going to be a huge star, bigger than Martha Kalifatidis and Abbie Chatfield,’ the source revealed.

Ella has also been extremely successful since finding fame on Married At First Sight this year.

With 594,000 Instagram followers, the Melbourne-based beauty is the most followed participant from her season. 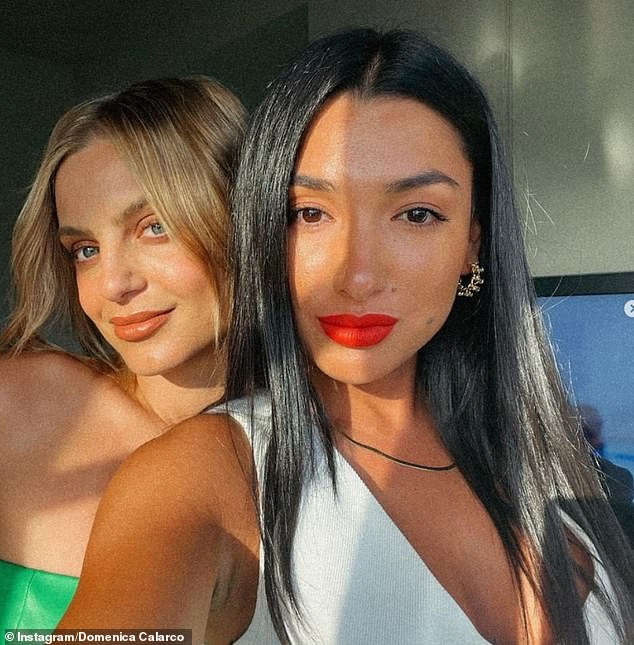 Cashing in: Domenica recently launched a fashion range with Showpo, while Ella is the most followed participant from her MAFS season with 594,000 Instagram followers

Pierce Brosnan cuts a handsome figure in grey suit as he reveals plans to...