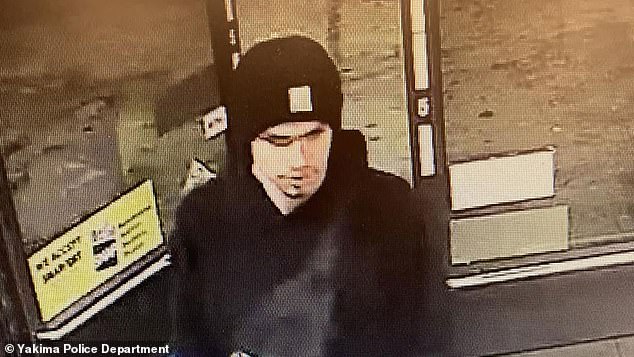 By Ross Ibbetson For Dailymail.com

A gunman killed three people ‘at random’ at a Washington convenience store before fleeing the scene, police said Tuesday as they warned the public not to approach the suspect who could be ‘armed and dangerous.’

Jarid Haddock, 21, was identified as the suspect by police after the attack at the Circle K store in Yakima, about 110 miles southeast of Seattle, at 3.30am Tuesday.

Two victims were shot inside the store, while a third was shot outside. The suspect then ran across the street to the ARCO/ampm gas station where he shot at a another person inside a Chrysler sedan, forcing them to move into the passenger seat before driving off in the vehicle.

‘It appears to be a random situation. There was no apparent conflict between the parties,’ said Yakima Police Chief Matthew Murray. ‘The male just walked in and started shooting.’

It is the latest horrifying shooting to rock the country this week after back-to-back mass shootings in California, which left 18 victims dead.

Jarid Haddock, 21, was identified by police as the suspect after the attack at the Circle K store in Yakima, about 110 miles southeast of Seattle, at 3.30am Tuesday. 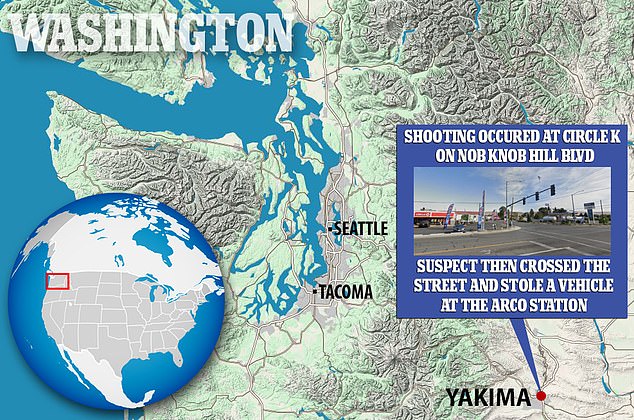 ‘This is a dangerous person and it’s random, so there is a danger to the community,’ Murray said. ‘We don’t have a motive and we don’t know why.’

The police department released a photo on social media of a man wearing all black, including a hat, hoodie and jeans, and white Nike shoes.

Yakima Police said the suspect initially pulled into the ARCO/ampm gas station and ‘tried to get into the lobby,’ but the doors were locked.

‘He then walked across the street to the Circle K,’ Murray said. ‘As he’s walking into the store he pulls out his gun and there are two people getting food and he shoots them.’ Both people died.

The suspect then left the store, shooting at another person who was also killed.

The male then ran across the street back to the gas station, shooting at a gray or silver Chrysler 200 sedan, and forcing the driver to move into the passenger seat.

The condition of the driver, including whether he was wounded, was unknown.

Murray said: ‘We do believe that there’s possibly a fourth victim. We do not know their condition.

‘The man, after he left the Circle K, went across the street and shot into a vehicle.

‘You could see the party in that vehicle move to the passenger seat and the suspect stole his car.’ 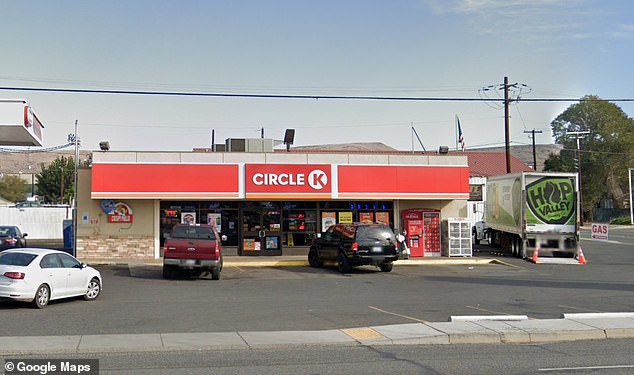 The Circle K store near E Nob Hill Boulevard and S 18th Street in Yakima, about 110 miles southeast of Seattle

The car was last seen heading eastbound on Nob Hill Boulevard at Highway 24.

‘We are closing some roads in the East Valley Area for an undetermined amount of time,’ its tweet said.

Yakima is a city of about 97,000 residents in Washington’s Yamika Valley, an agricultural region known for apple crops and wineries.