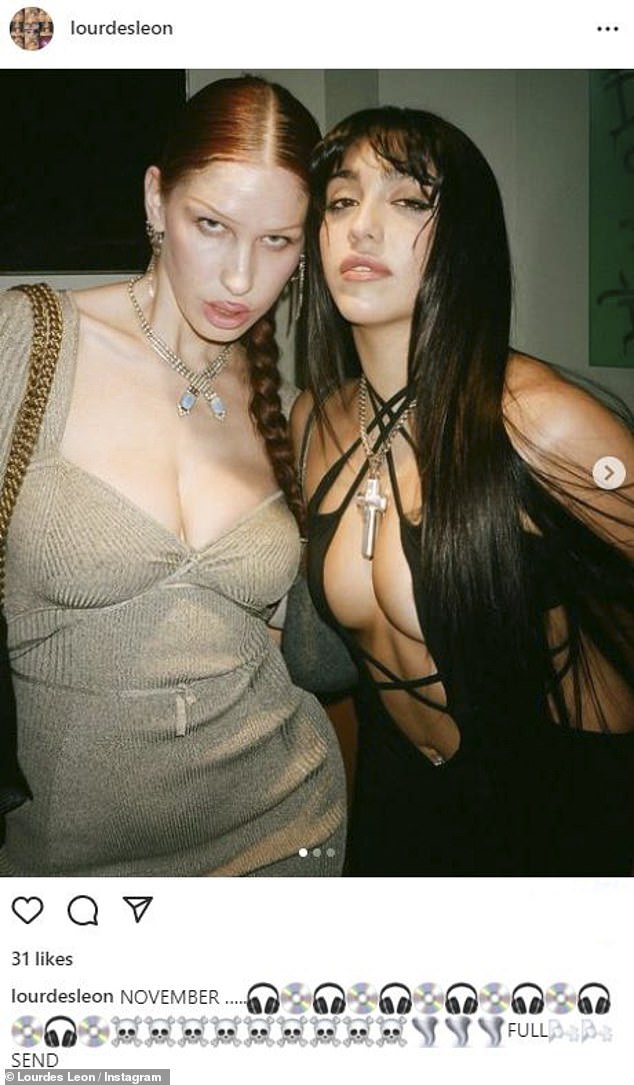 Lourdes Leon stunned in a new photo series that she shared onto her main Instagram page earlier Sunday.

The model posed next to fellow musician and instrumentalist, Trinity Vigorsky, in the collection of stylish snaps, and possibly hinted at a potential music collaboration in the caption.

Madonna‘s oldest daughter recently celebrated her 26th birthday earlier this week on Friday, and the iconic performer penned a heartfelt tribute on her own social media to wish her daughter a happy birthday.

The singer opted for a fashionable ensemble as she enjoyed an outing with a group of her close friends.

She donned a long, black halter dress with cutouts on the top portion of the ensemble that clung to her fit physique.

Lourdes accessorized her look by adding a necklace with a large, crucifix embellishment.

Her dark hair was parted in the middle and flowed straight past her shoulders, with her bangs lightly curled on her forehead. 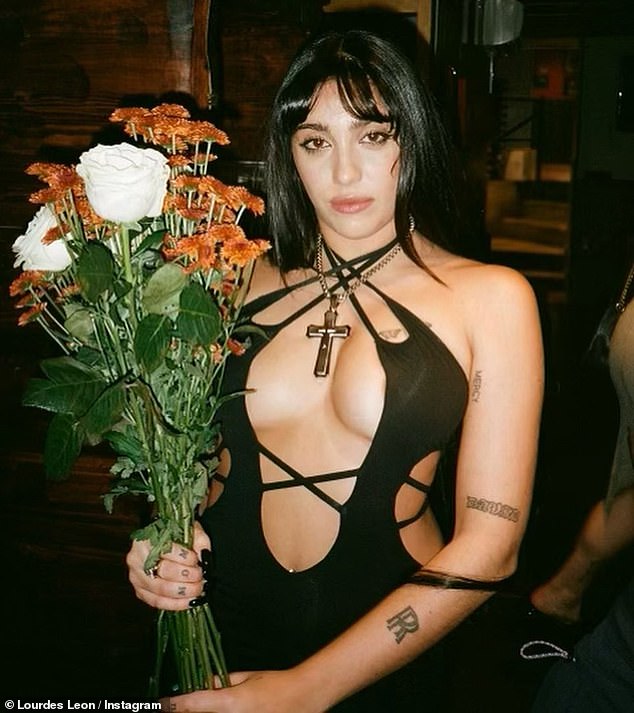 Beautiful: The model and singer posed with a bouquet of flowers, possibly in celebration of her birthday on Friday

In the first snap she shared in her post, Lourdes posed next to Trinity Vigorsky, who also goes by the name of Eartheater. She is known as a vocalist, producer, and a composer.

In the caption, Madonna’s daughter typed out the word, ‘NOVEMBER…,’ in call caps, followed by numerous headphone and CD emojis, possibly hinting at a collaboration between the two music artists.

Lourdes has followed in her mother’s footsteps and recently released her single, ‘Lock&Key’ earlier this year in August under the name Lolahol, which is also the name of her Instagram handle.

In another picture in the collection, the star held a bouquet of flowers which included a few white roses. She may have gotten the stunning array of flowers due to her recent birthday celebration. 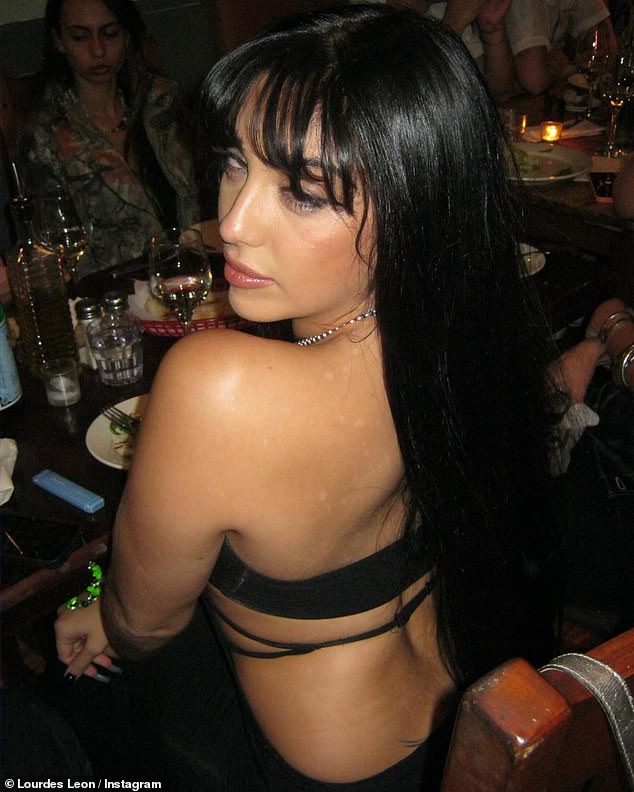 Fun evening: The last snap that she shared was taken above her as she sat at a table in a crowded restaurant 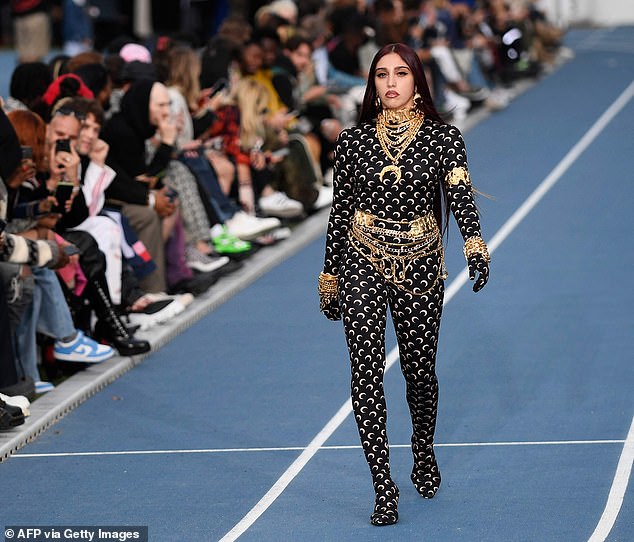 Working hard: Along with creating music, Lourdes is also prominent in the modeling industry; the star walking the runway in June during Paris Fashion Week

The last snap was a picture of herself taken from above her as she sat a crowded table in a restaurant.

She looked over her shoulder as a friend took a photo to reveal the backless side of the long dress.

Earlier on Friday, Lourdes celebrated her 26th birthday, and her mother uploaded a heartfelt post on Instagram to send birthday wished to her eldest daughter, whom she shares with ex and fitness trainer, Carlos Leon.

The adorable post contained a reel of mother daughter snaps taken over the years, including one when Lourdes was just a toddler. 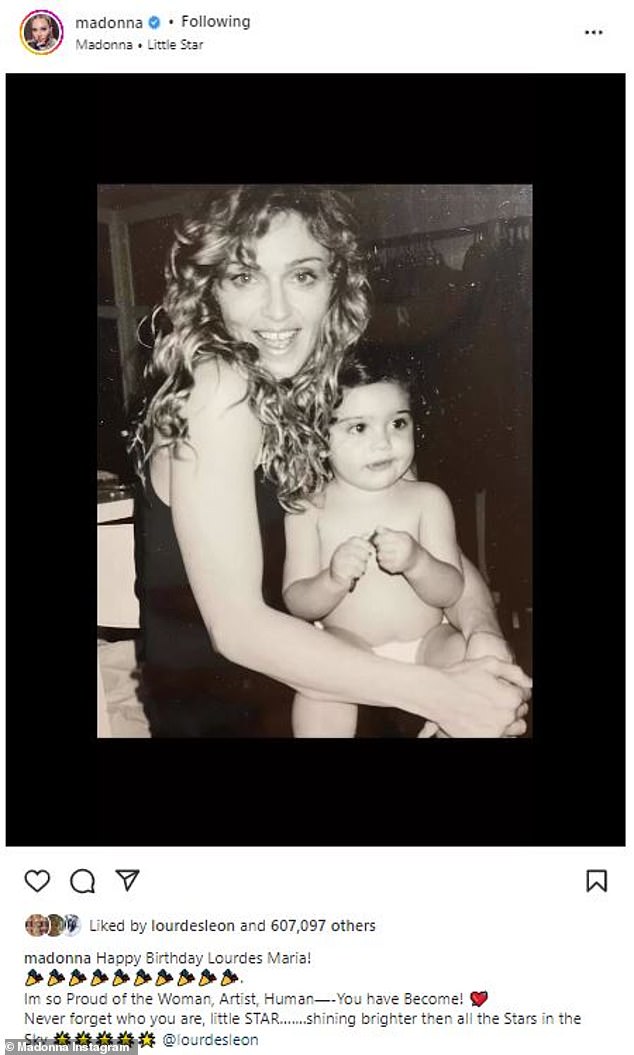 Birthday tribute: Madonna uploaded a tribute to her daughter, Lourdes, to celebrate her 26th birthday 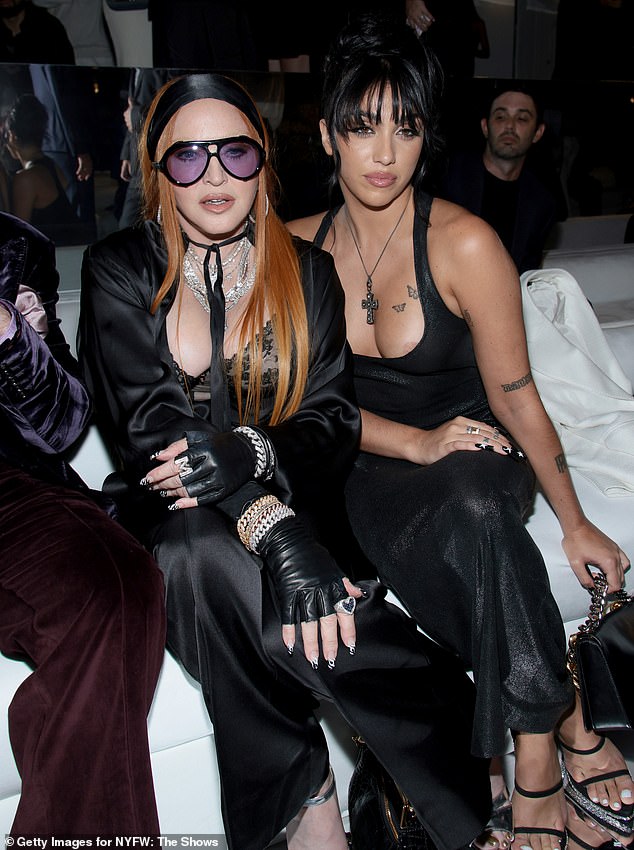 Mother daughter duo: Madonna shares her daughter, Lourdes, with her ex and fitness trainer, Carlos Leon; the two seen in September in NYC

She continued with, ‘Im so Proud of the Woman, Artist, Human—-You have Become! Never forget who you are, little STAR…….shining brighter then all the Stars in the Sky.’

The mother daughter duo appear to have a close relationship, and recently were pictured spending time together during New York Fashion Week last week in September.

In the past, Lourdes has commented about how her mother raised her in a somewhat strict upbringing, but explained to Interview Magazine advice Madonna had given her when she started living on her own.

‘I’ve been so concerned with making a decent living, and wanting to live more luxuriously than I was when I first graduated and wasn’t earning a lot of money. She was like, ‘Remember, this s**t is not real.’

‘It’s not about the money or your face or how hot you look. It’s about what you’re bringing into the world and what you’re going to leave behind,’ Madonna had told her. ‘That always shakes me awake when I get too caught up in everything.’

Wendy Williams’ only child, Kevin, 22, is evicted from his $2million Miami apartment

How much Anthony Albanese will be paid Australia’s new prime minister with pay rising...