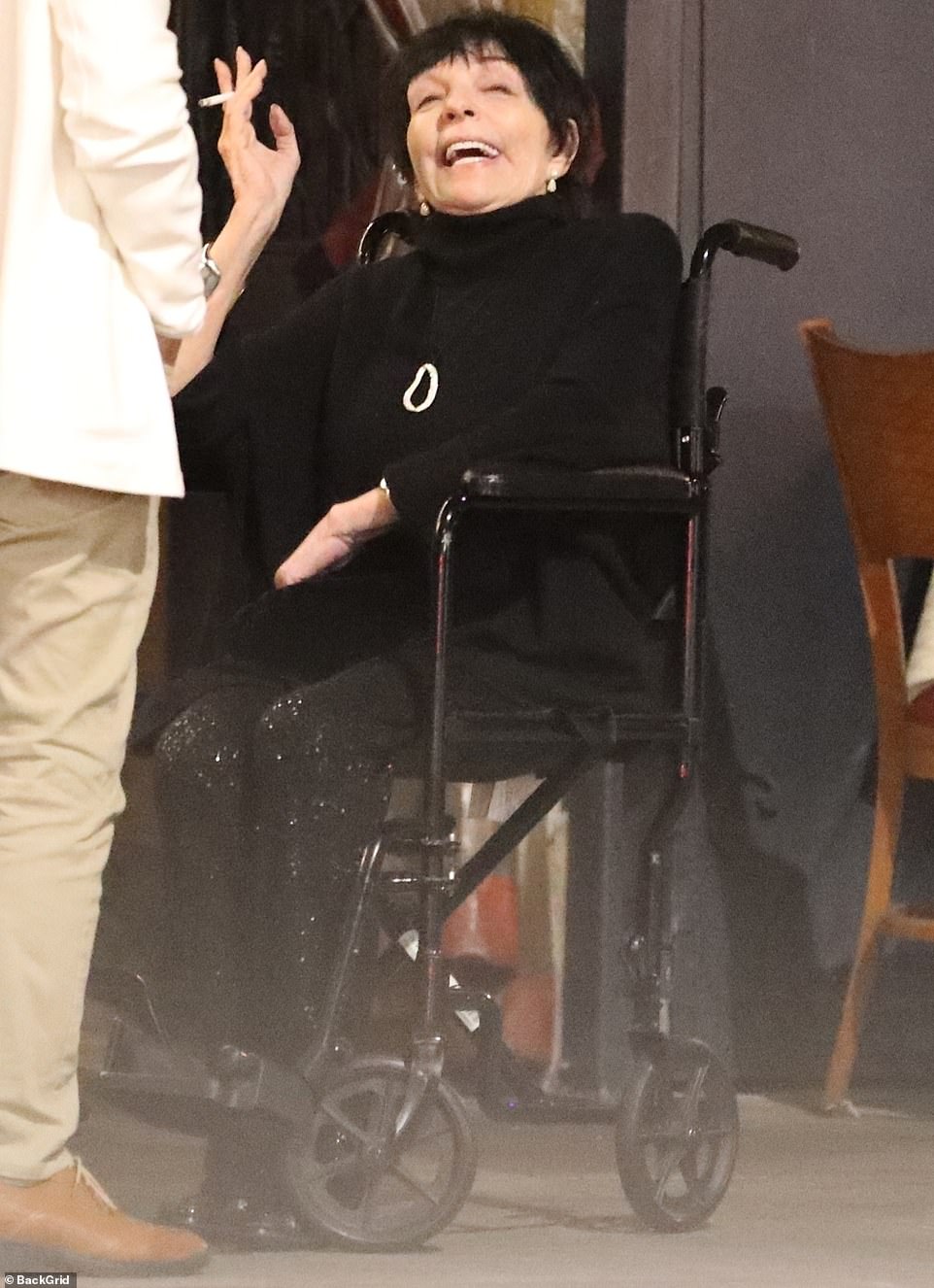 Liza Minnelli is not letting her recent drama at the Oscars get her down.

After reports that she felt ‘sabotaged’ at the event, and forced into appearing on stage with Lady Gaga in a wheelchair, the Cabaret icon was spotted enjoying a dinner out with her friend Joan Collins.

EXCLUSIVE: Liza Minelli moves on from Oscars ‘sabotage’ with a cigarette and a smile as she leaves dinner with Joan Collins in wheelchair… on Thursday night in West Hollywood

After dinner, the daughter of Judy Garland was seen puffing on a cigarette as she was helped to her vehicle in a wheelchair.

The sighting comes after Liza’s friend Michael came to her defense after viewers worried that she looked frail and out of it when she presented Best Picture at the 2022 Academy Awards.

During an appearance Monday on SirusXM’s The Jess Cagle Show, Feinstein, 65, claimed that the acting and singing legend had been ‘sabotaged’ by Oscars organizers at the last minute. 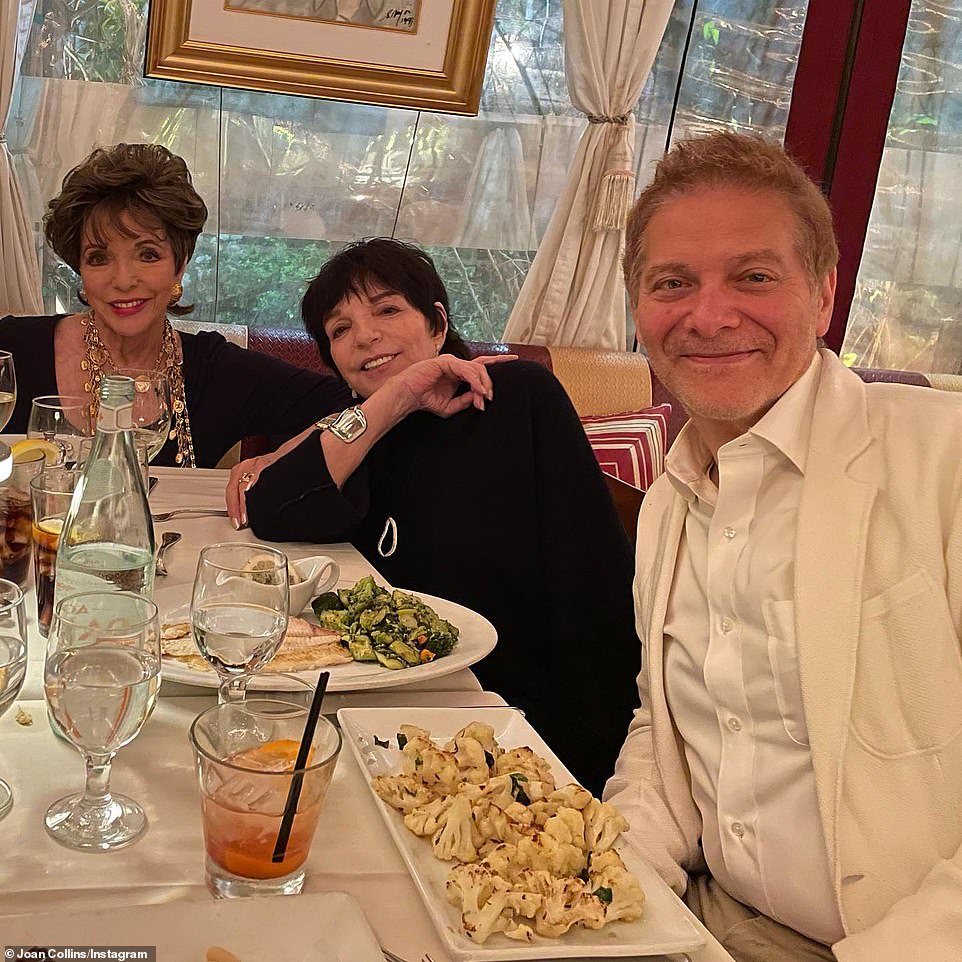 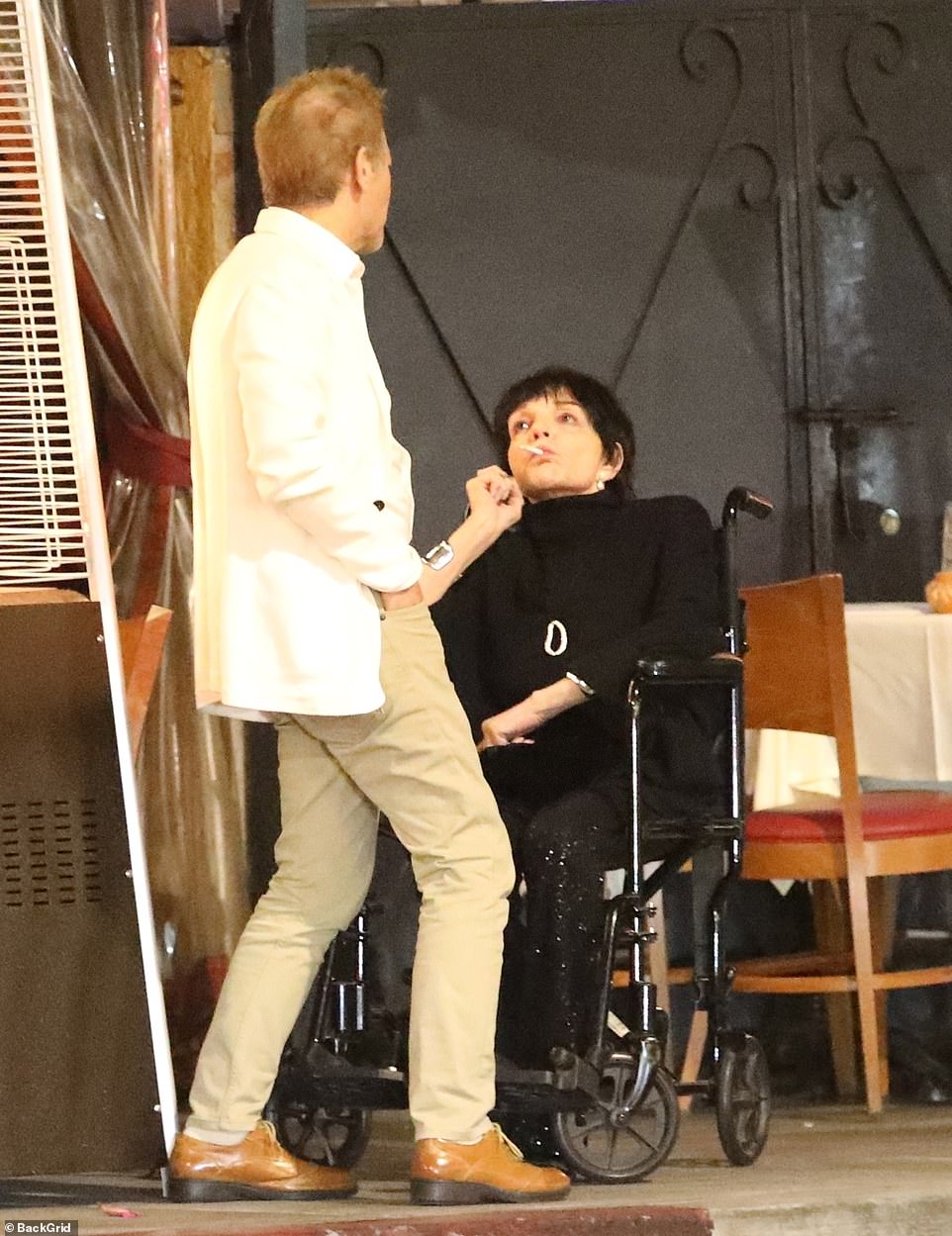 Relief: After dinner, the daughter of Judy Garland was seen puffing on a cigarette as she was helped to her vehicle in a wheelchair 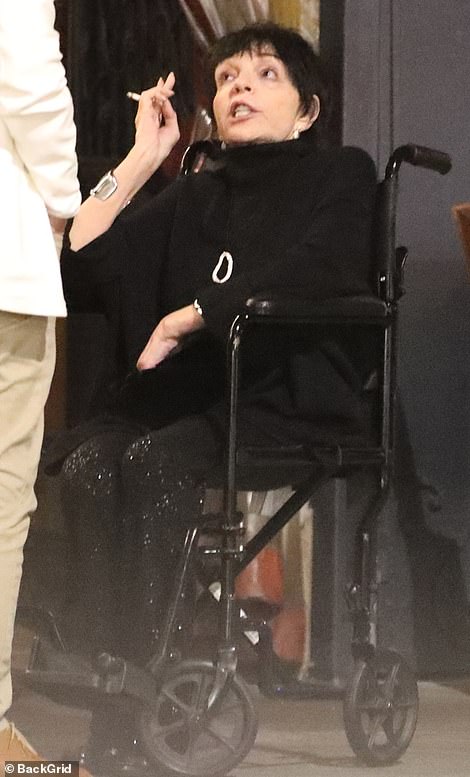 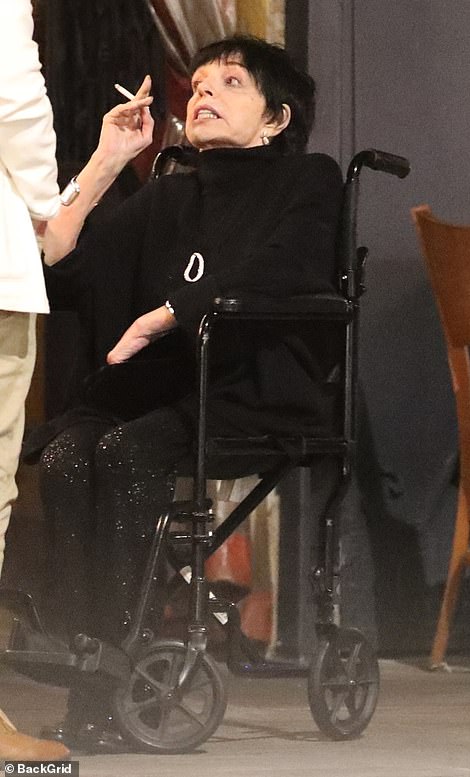 Animated: Liza looked as though she was having a lively conversation with her pal on Thursday

He said the plan had been for Minnelli to appear seated in a director’s chair, but that she was forced to use a wheelchair at the last minute, which left her flustered and ‘discombobulated.’

Feinstein, an acclaimed jazz singer who focuses on standards, said he was in attendance at the Oscar with Minnelli. He claimed that she had wanted to do her presentation sitting down due to back pain issues.

‘You know, that whole thing was, she was sabotaged. That’s the terrible word to use, but she only agreed to appear on the Oscars if she would be in the director’s chair, cuz she’s been having back trouble,’ he explained. 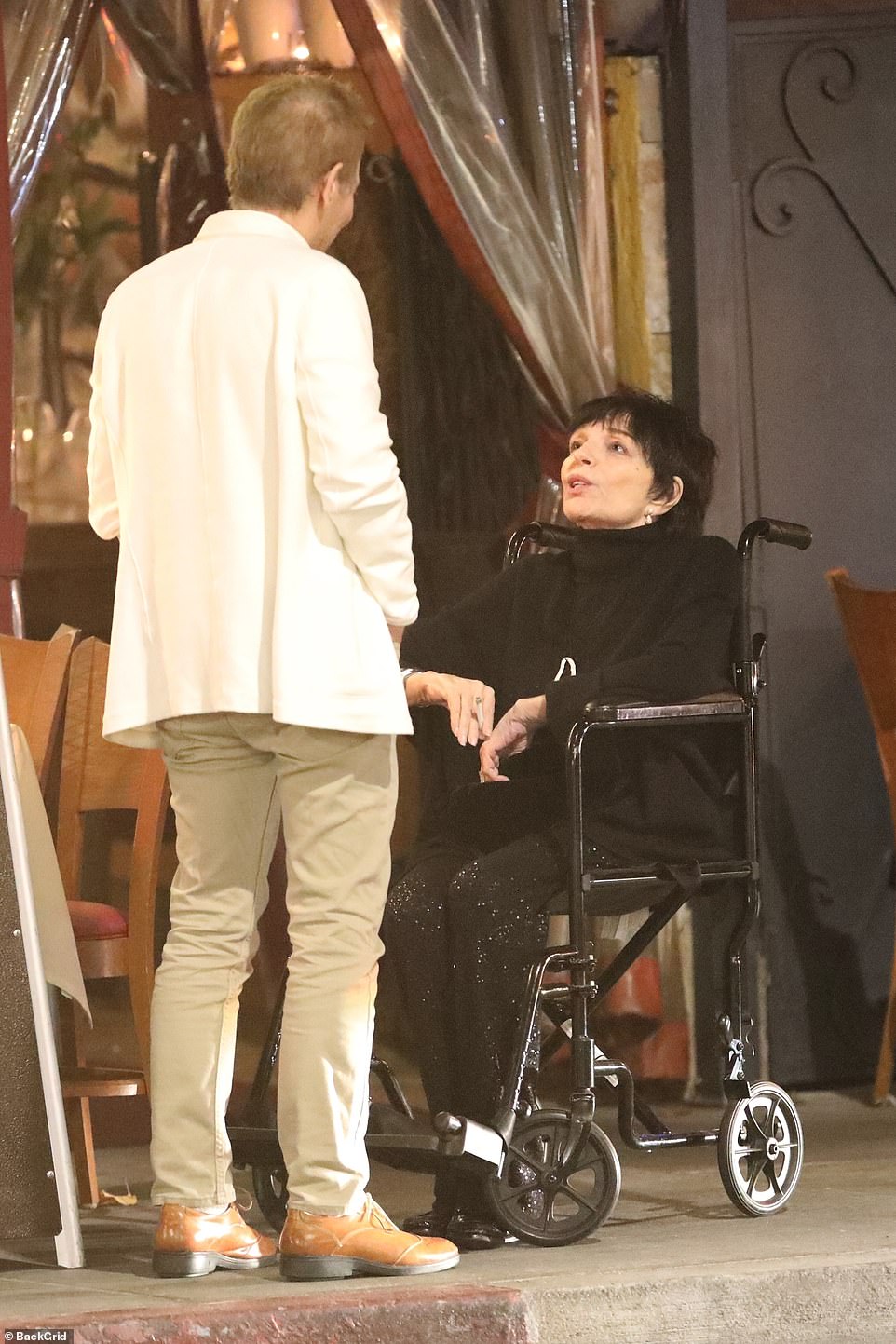 Talking it out: Liza’s friend Michael came to her defense after viewers worried that she looked frail and out of it when she presented Best Picture at the 2022 Academy Awards

Aftermath: It was recently revealed that Liza was left ‘flustered’ after being asked to go on stage at the Oscars in a wheelchair 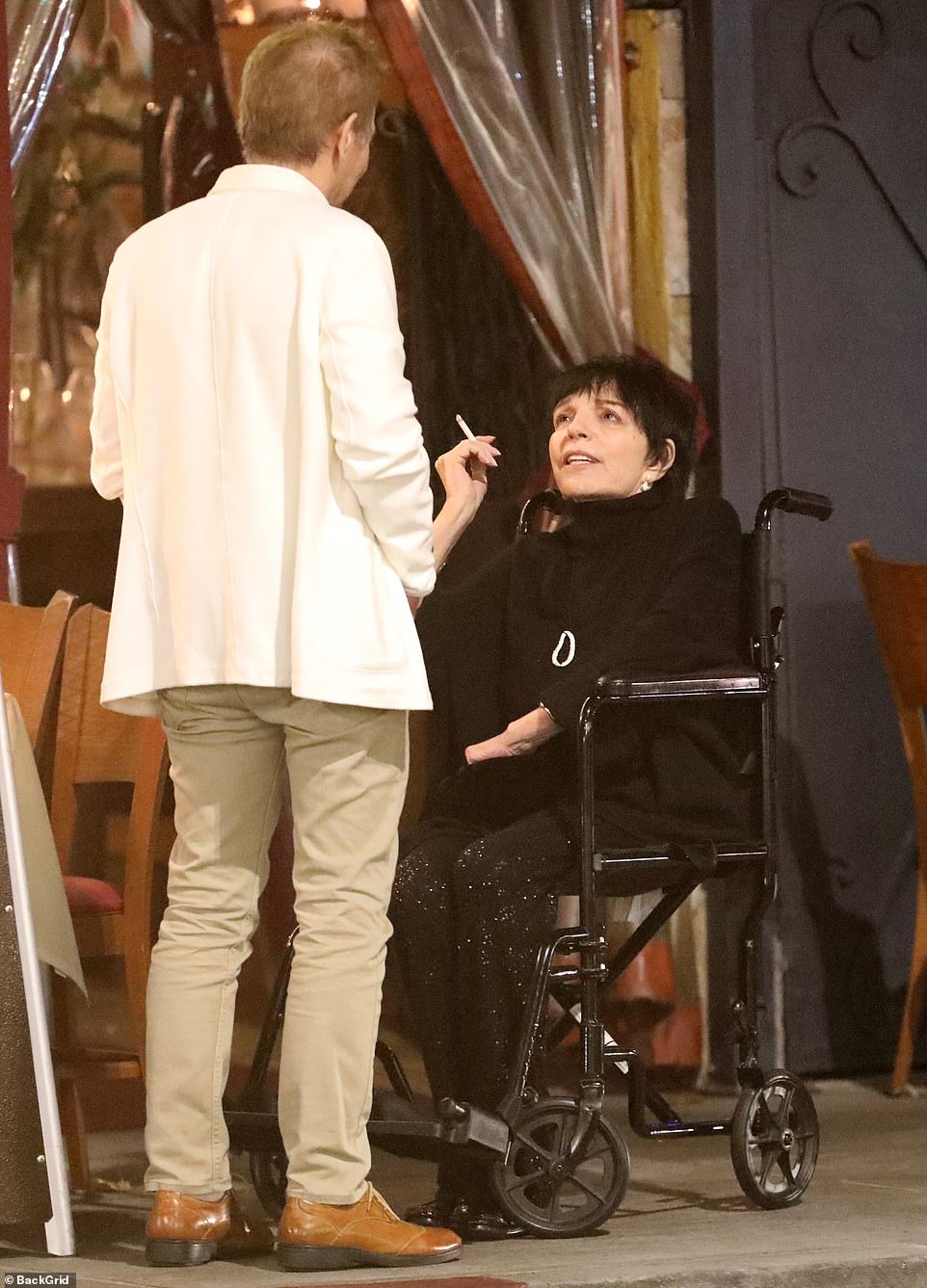 Deep in conversation: Liza appeared to be enjoying herself after a night out with friends

He said the New York, New York star wanted to look as strong as possible in front of the televised audience.

Although the plan seemed to have been worked out, Feinstein claimed that Will Smith’s shocking slap of Chris Rock led to disorder backstage and forced Minnelli out of her preferred chair. 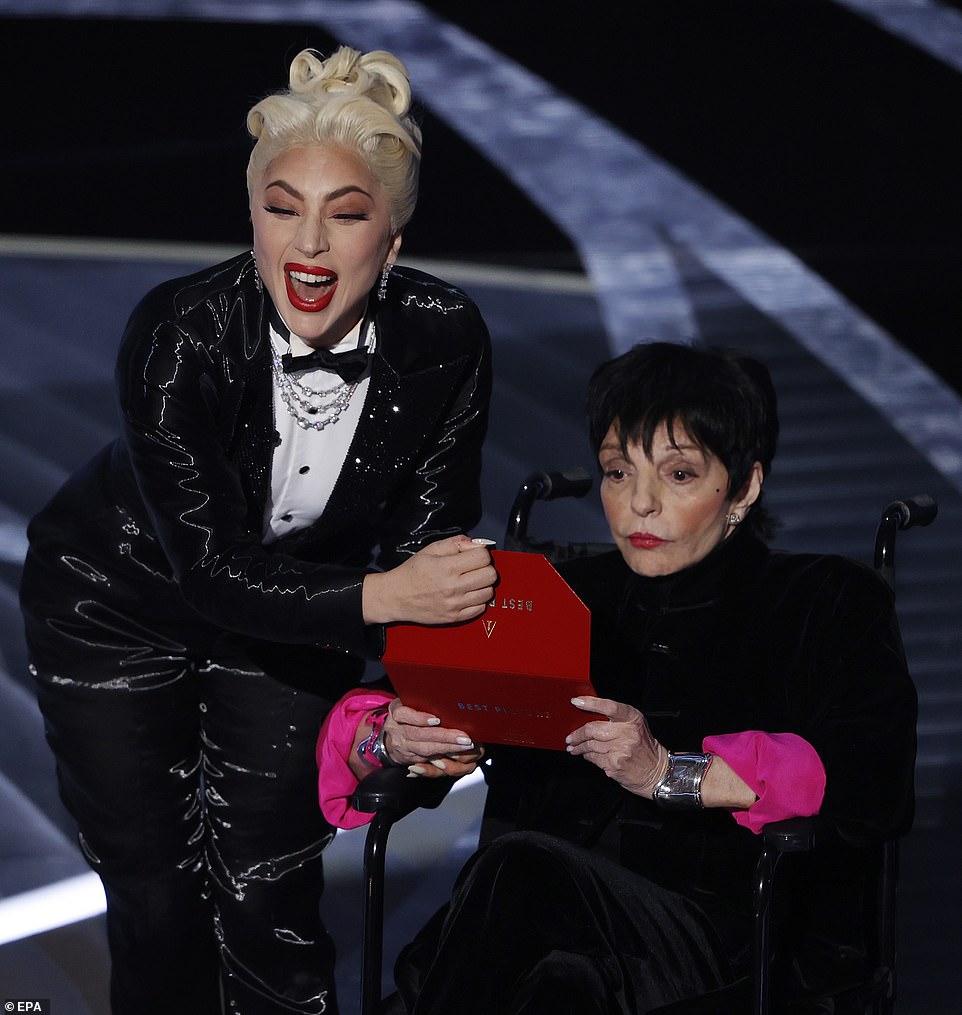 Last-minute change: Liza was said to have felt ‘sabotaged’ at the Oscars after her request to use a director’s chair was ignored at the last minute and she was forced to use a wheelchair 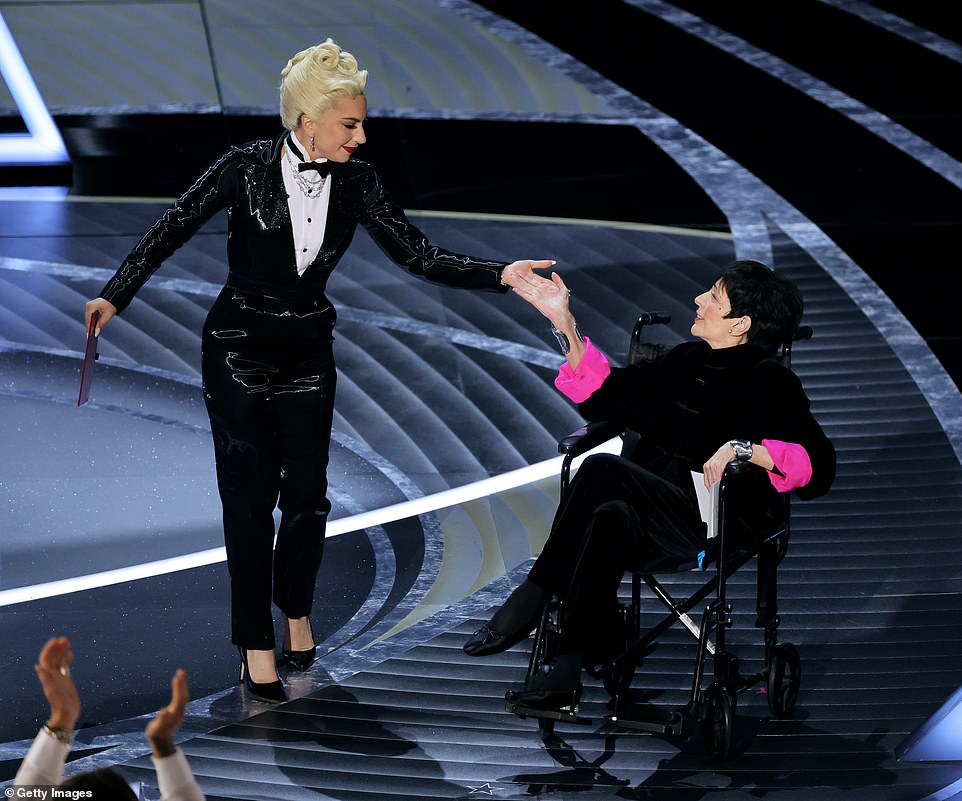 Ultimatum: He said staff threatened to not let her present at all if she didn’t get in the wheelchair. ‘”Well, it’s either that or nothing,”‘ they allegedly said; seen March 27

‘And then literally, literally five minutes before she went on, when she sat in the director’s chair back there, and because every, I guess they were all shaken up because of everything that had happened earlier, the stage manager said, “Well, she has to be in a wheelchair” and Liza pleaded,’ he continued.

‘She said, “No, I will not be seen in a wheelchair in front of everybody. I will not do this. I refused to do this.”‘

Feinstein claimed that Oscars organizers threatened to not let Minnelli present — and possibly to force Gaga to do it alone — unless she gave in to their last-minute demands. 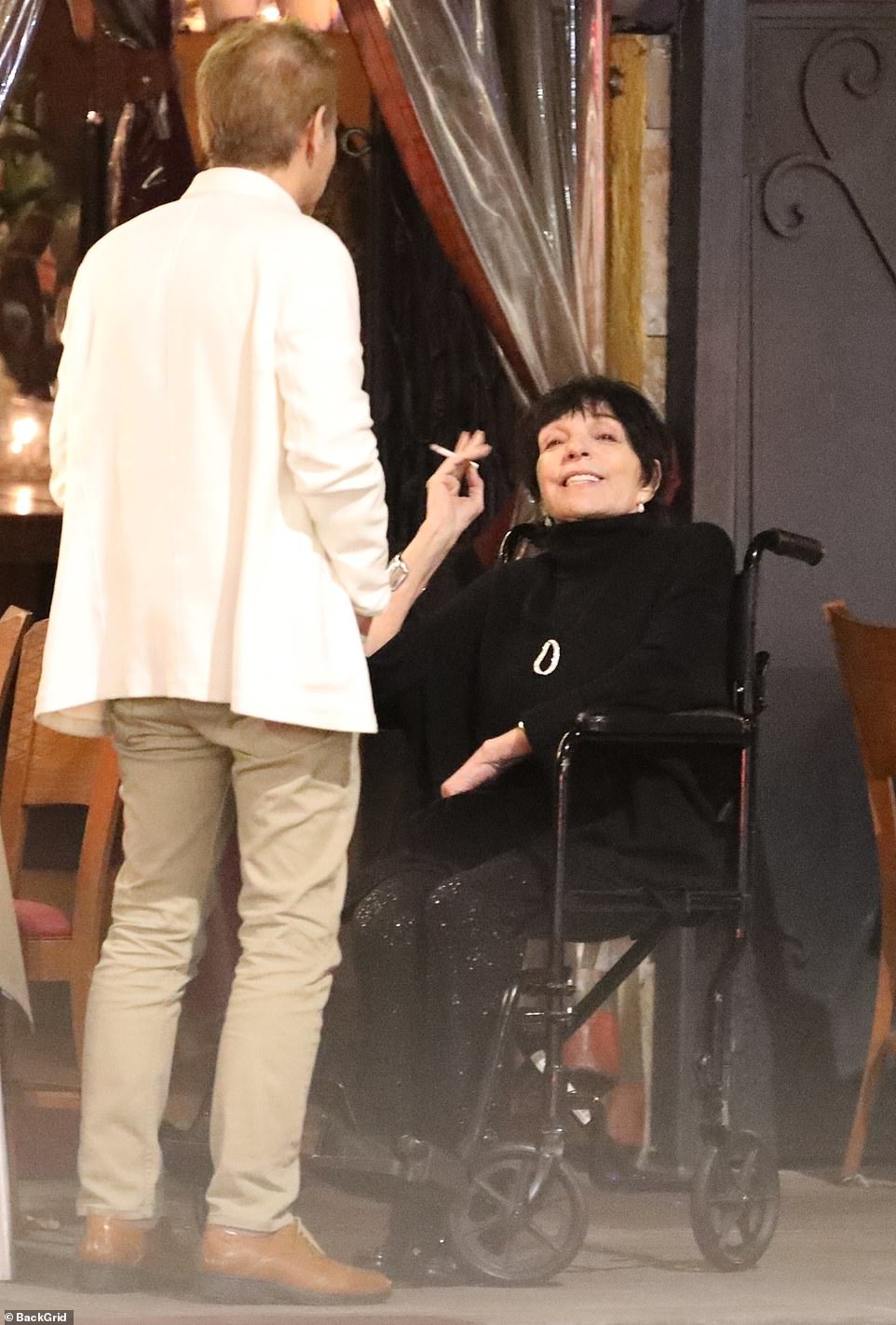 What drama? Liza let out a beaming smile after dinner with her pals 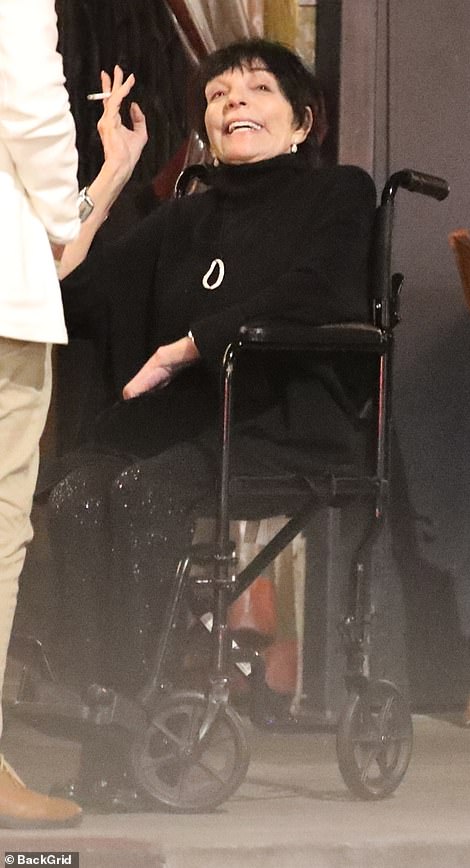 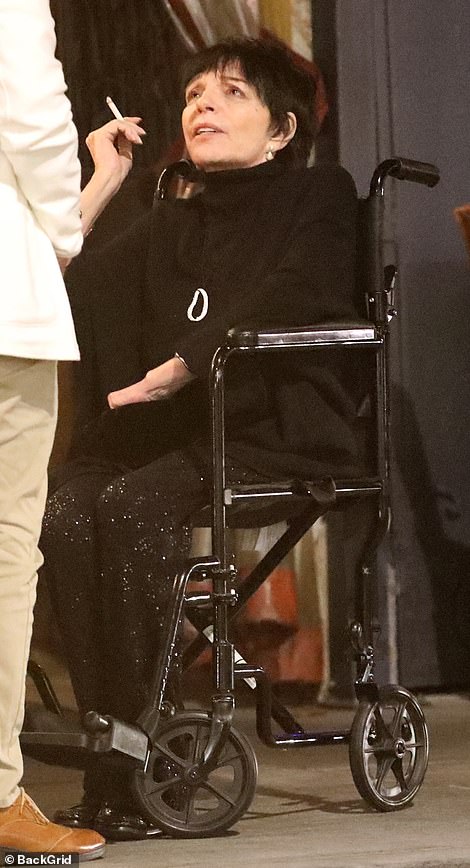 Life is a Cabaret: Despite appearing frail, the Oscar winner is still keeping up a busy social life 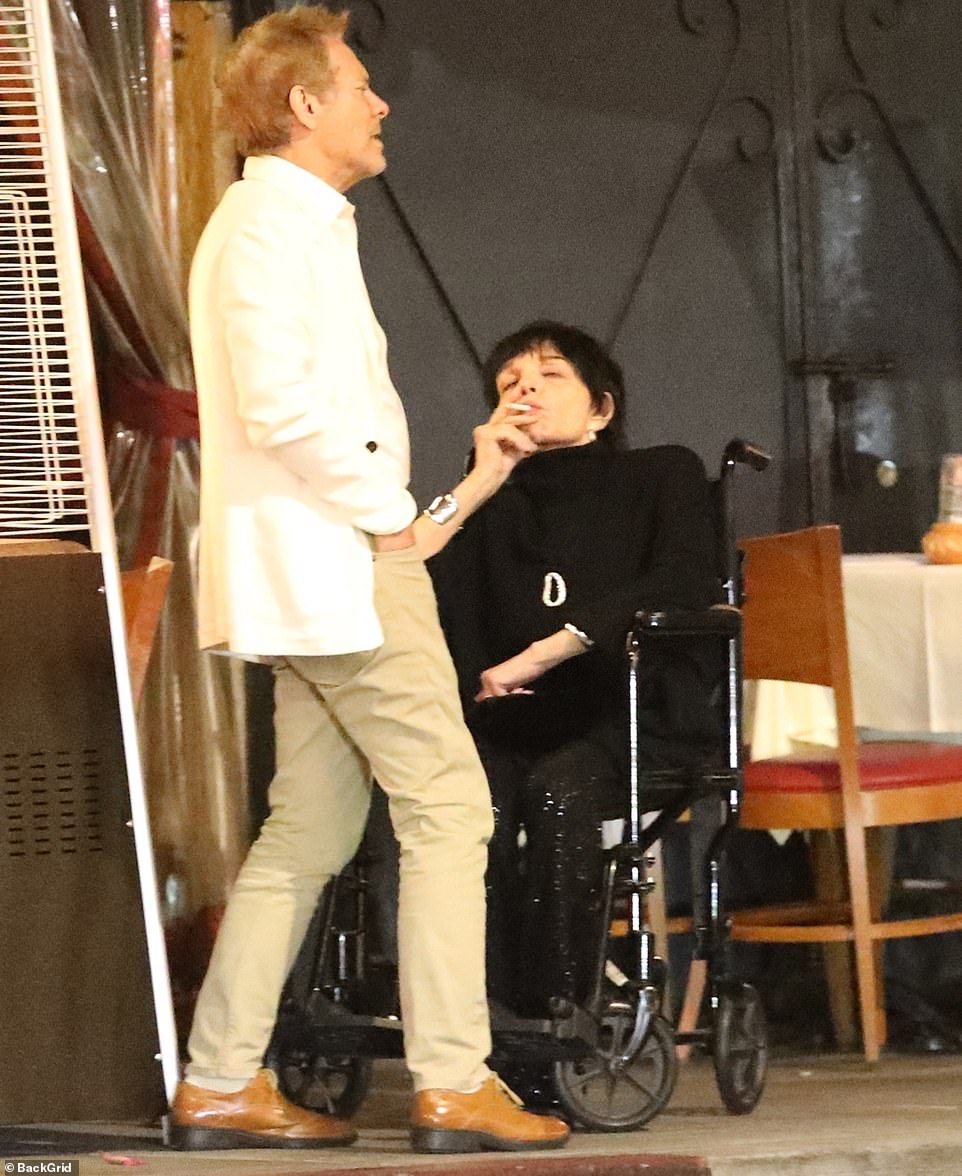 One last puff: Liza got her nicotine fix as she waited for her car to pull up

‘”Well, it’s either that or nothing,”‘ staff allegedly told the daughter of Judy Garland and Vincente Minnelli.

Feinstein said he asked Minnelli how she wanted to proceed, and she responded, ‘I’ll do it.’

However, he claimed she was ‘so shaken’ from the confrontation that it left her ‘discombobulated.’

‘She was nervous. I mean, and it made her look like she was out of it. And she was just so shaken up that it was,’ he continued. 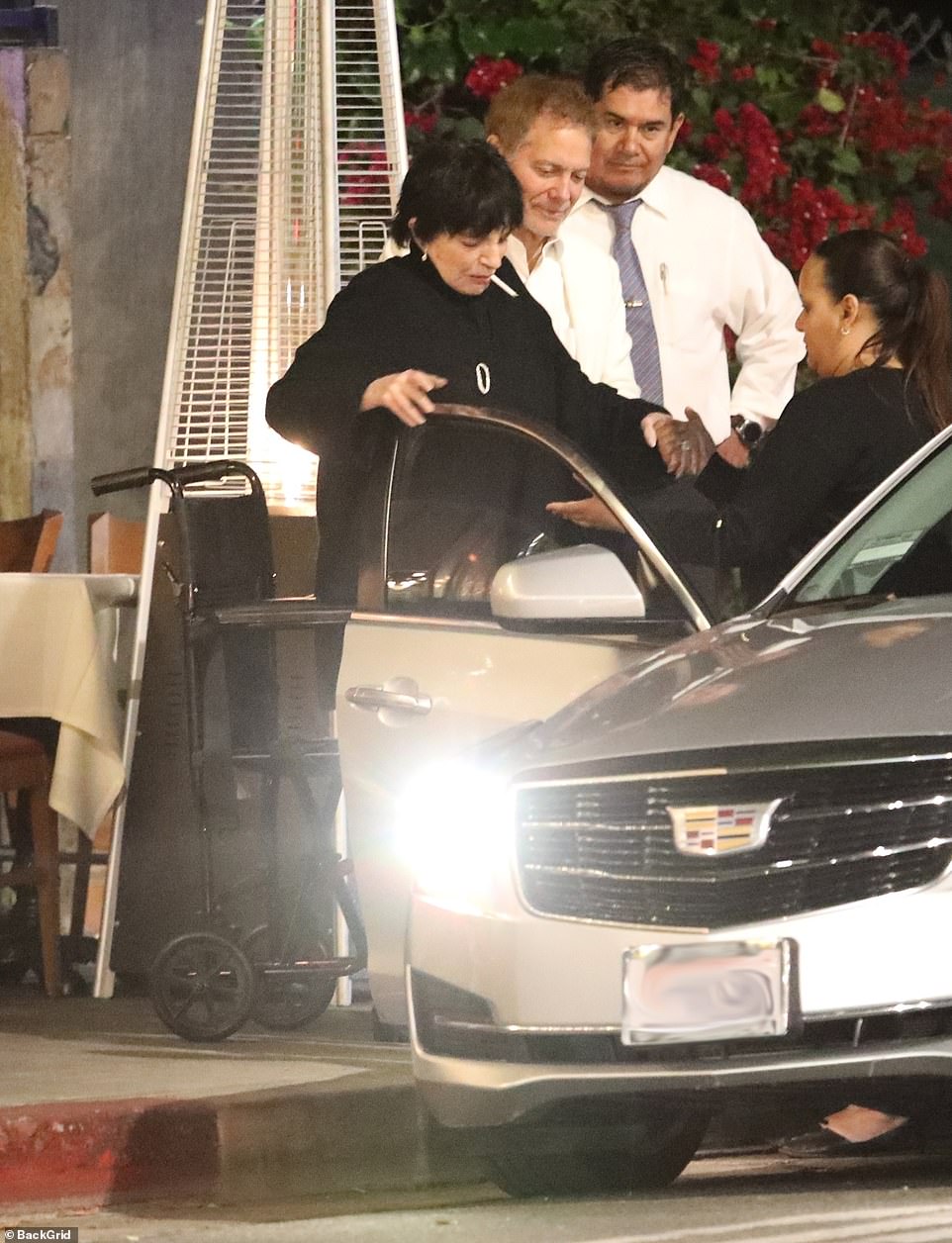 Getaway: The legend is helped into her car after enjoying dinner 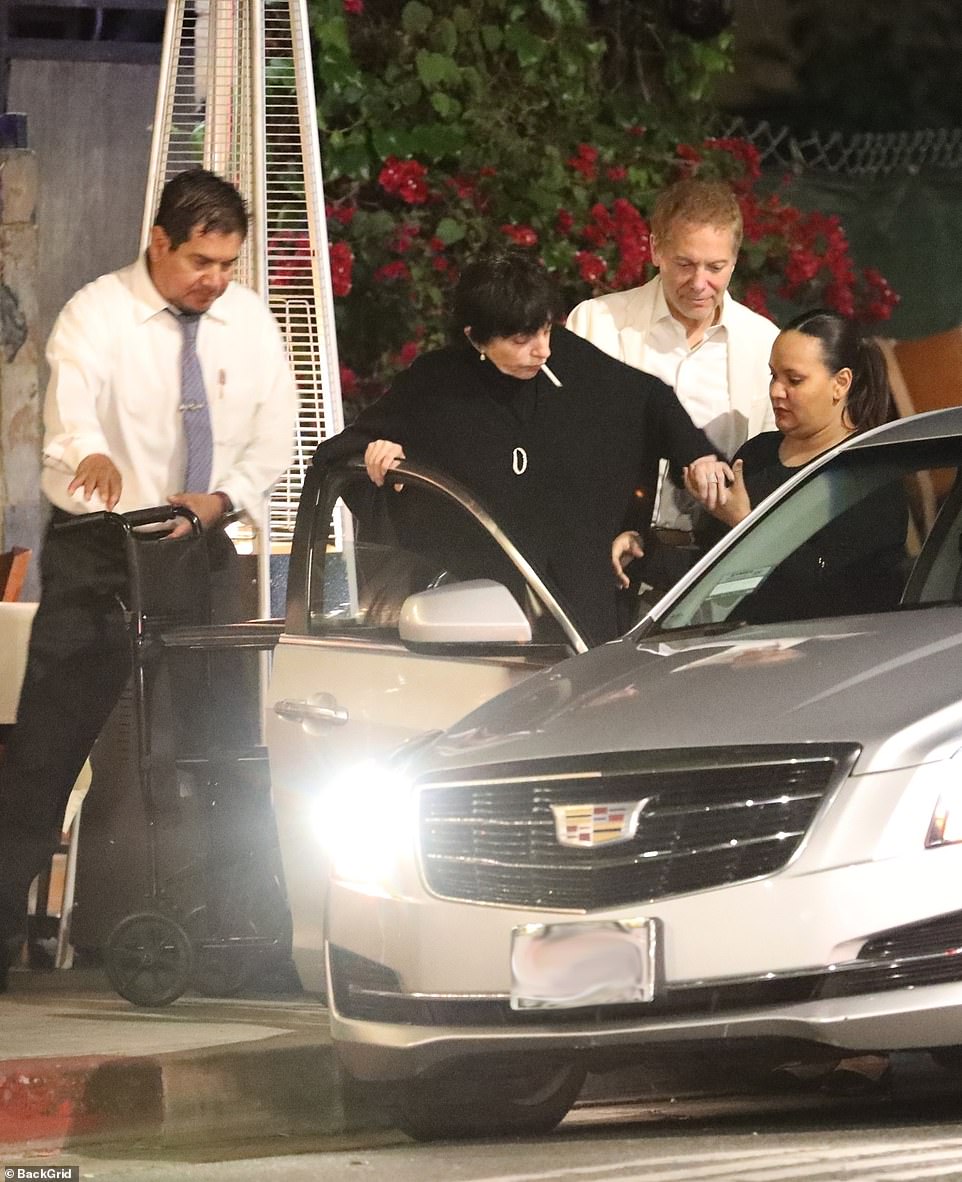 Hollywood royalty: Liza was seen leaving the restaurant on Thursday 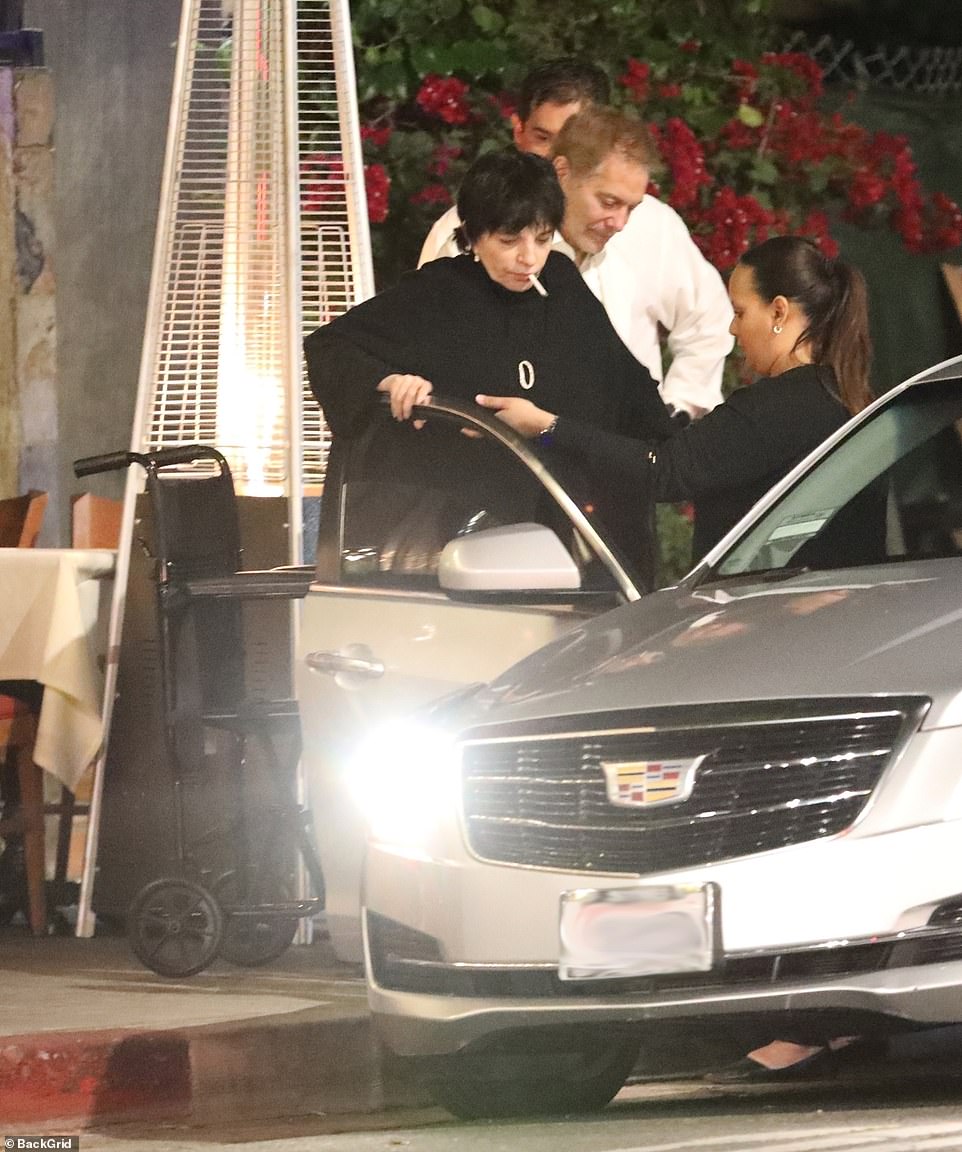 Help: The star was helped into her vehicle by her pal 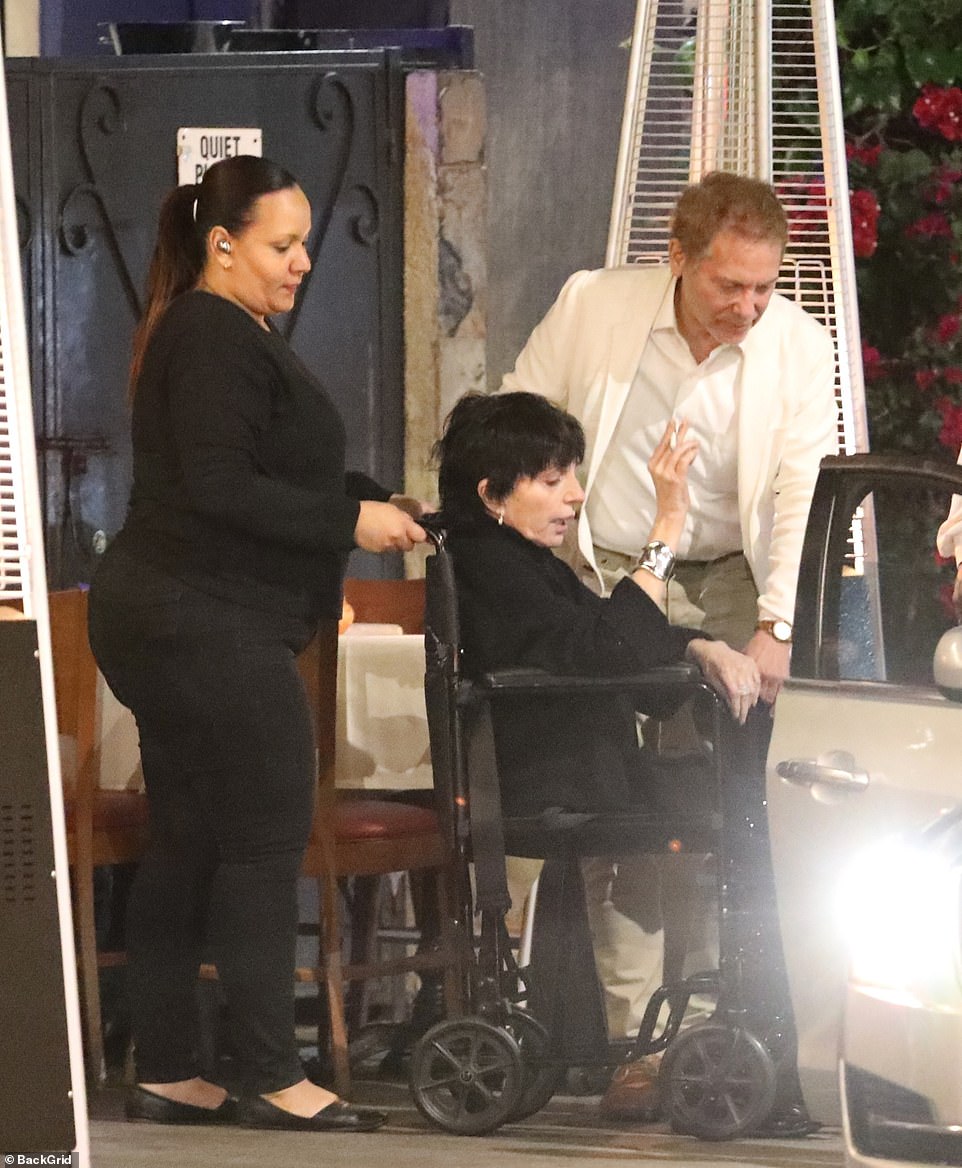 Silent: Liza has yet to address her Oscars moment herself

Liza’s rare public appearance comes amid the 50th anniversary celebrations of her 1972 classic Cabaret, which earned her an Academy Award for Best Actress and helped her move out of the shadow of her famous parents, but Feinstein suggested that the Oscars fiasco may have tainted what should have been a glorious moment for her.

‘Can you imagine being suddenly forced to be seen by millions of people the way you don’t wanna be seen? That’s what happened to her. And she was very disappointed at that, that that happened and it was not what was agreed to,’ he said.

‘So she’s, she is really doing well and it’s a shame that it turned out that way. She was very disappointed.’ 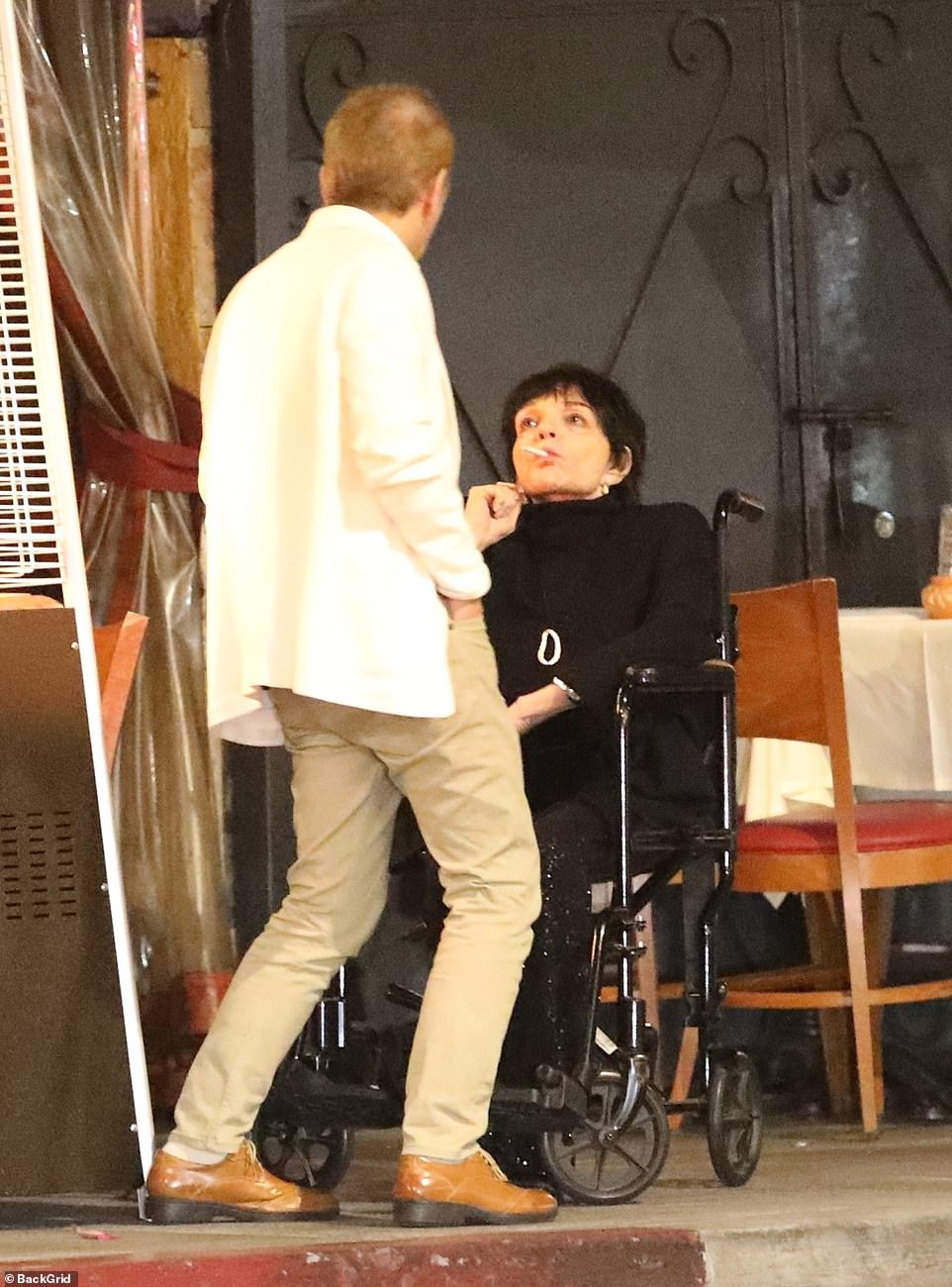 Relaxed: The star appeared to  be relaxed after dinner as she enjoyed a cigarette

Although Minnelli may not have presented herself in the manner that she hoped for, the audience was clearly excited to see her and gave her a standing ovation as she arrived on stage with Gaga.

‘Do you see that? The public, they love you,’ said the Poker Face singer as she got the card with the winner ready.

During the presentation, Liza at times had trouble reading her lines, though Gaga helped her along. 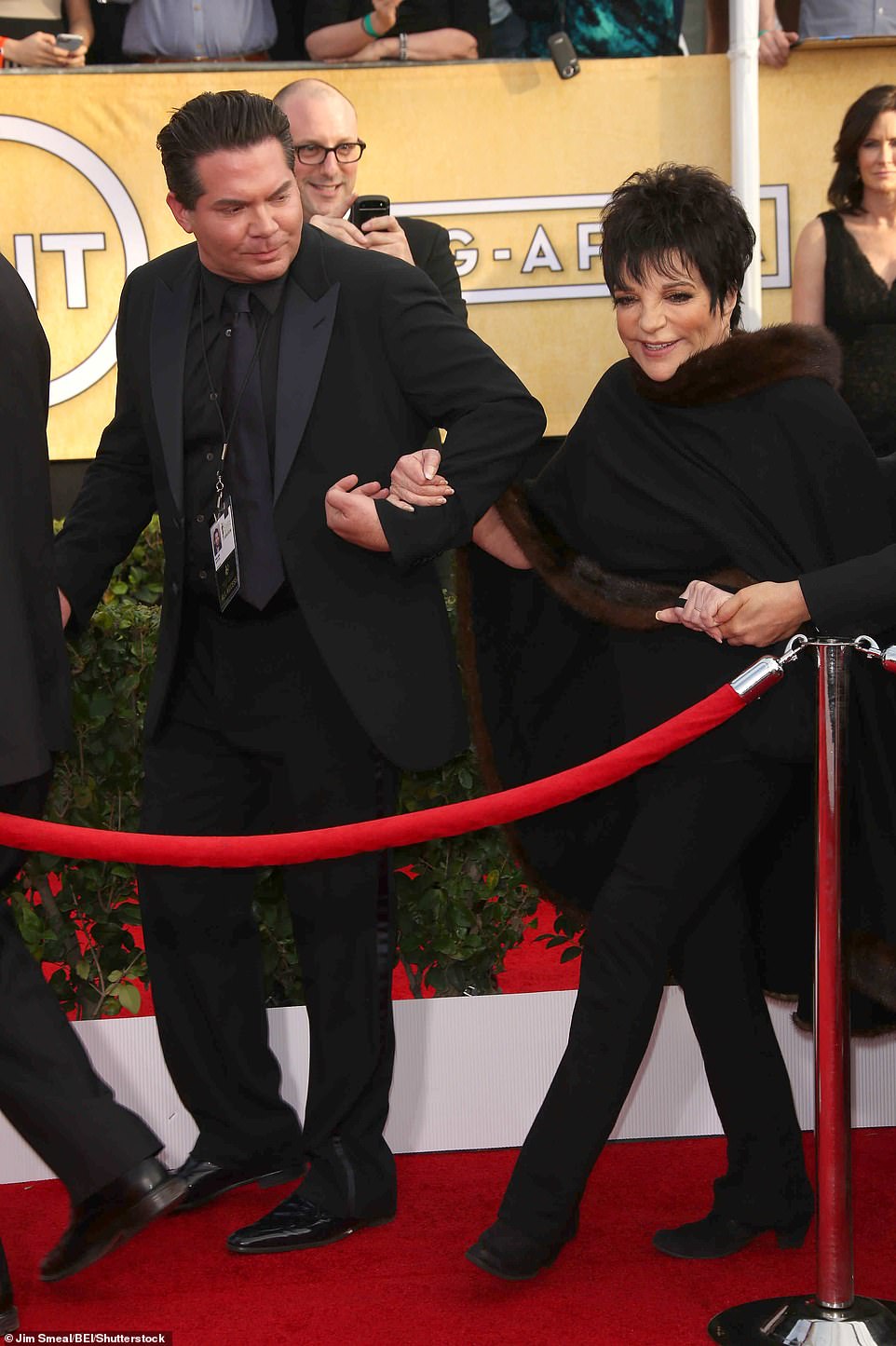 ‘Shame’: ‘So she’s, she is really doing well and it’s a shame that it turned out that way. She was very disappointed’; Minnelli seen at the Screen Actors Guild Awards in 2014

‘I got you,’ she said sweetly to the stage and screen veteran, to which Minnelli replied, ‘I know.’

Viewers at home applauded Gaga’s kindness on social media, particularly as a contrasted to Will Smith’s shocking slap and shouted profanities earlier in the evening, calling it a ‘highlight of the night.’

According to the New York Post, Gaga had personally requested that Minnelli join her to present Best Picture.

Bryan Cranston sports a bushy beard at the Broadway opening of the new musical...

Bay Area woman, 81, is hurled to the ground during carjacking while she fed...