Russia and Britain battle to win Indian support over Ukraine war: Liz Truss and Russia’s Sergei Lavrov both in New Delhi to woo Modi government as the UK demands it stop ‘sitting on the fence’ and ‘stand up’ for democracy

Britain and Russia will battle it out to get a reluctant India on their side over the war in Ukraine today, with the UK demanding it stop ‘sitting on the fence’ and back the West.

India, which is heavily reliant on Moscow for arms imports, has so far refused to join in western efforts to exert politician and economic pressure on Vladimir Putin. It abstained in a series of votes in the United Nations on the issue.

Modi has also steered away from publicly condemning the actions of Russia – a long-standing ally dating back to the Cold War.

Mr Lavrov will use his visit to push for closer trade links to help reduce the impact of economic sanctions imposed by the West on Russia following the invasion.

International Trade Secretary Anne-Marie Trevelyan said today she understood India’s reluctance to speak out. She told Sky News: ‘We understand why they’ve chosen to sit on the fence at the moment – they, you know, have connections in both directions.

‘But for us, it’s really important to see all countries who believe in democracy and the rule of law, and indeed defending your own territorial borders and wanting to have that sovereignty, respected by those around you, to stand up for that.’ 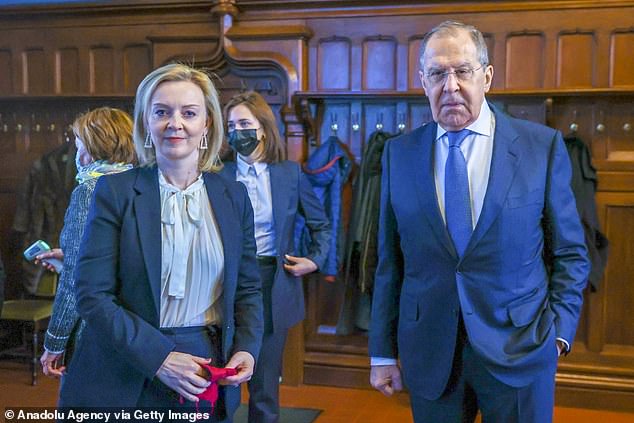 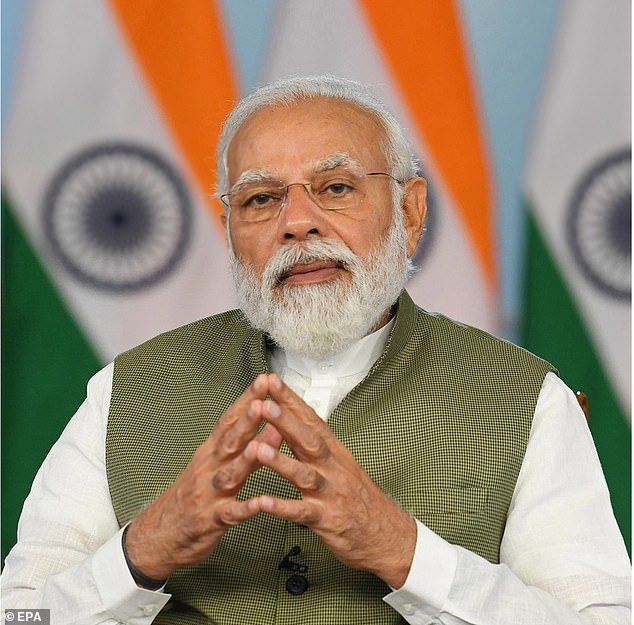 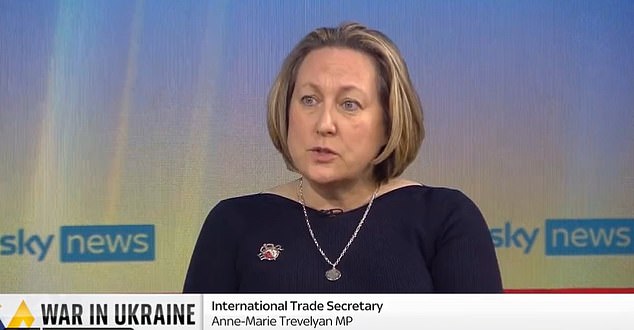 International Trade Secretary Anne-Marie Trevelyan said ‘It’s really important to see all countries who believe in democracy and the rule of law, and indeed defending your own territorial borders and wanting to have that sovereignty, respected by those around you, to stand up for that.’

Earlier this month, India agreed to import three million barrels of heavily discounted Russian oil as Moscow was forced to drop prices due to the effect of international sanctions.

Although the amounts are relatively small, there are concerns that volumes could increase in the coming months, potentially weakening the impact of economic restrictions.

In a statement, Ms Truss said: ‘Deeper ties between Britain and India will boost security in the Indo-Pacific and globally, and create jobs and opportunities in both countries.

‘This matters even more in the context of Russia’s unprovoked invasion of Ukraine and underlines the need for free democracies to work closer together in areas like defence, trade and cyber security.

‘India is an economic and tech powerhouse, the world’s largest democracy and a great friend of Britain, and I want to build an even closer relationship between our two nations.’

Ms Truss will use her visit to confirm £70 million of UK investment funding to support the development of renewable energy in India, which remains one of the world’s biggest users of hydrocarbons.

She will also announce a new joint cybersecurity programme aimed at protecting online infrastructure in both countries from attacks.

Since taking office in 2019, Prime Minister Boris Johnson has set great store by building relations with India, and last year struck a landmark agreement with Mr Modi to strengthen ties over the coming decade.

It came as China joined Russia in condemning ‘illegal sanctions’ against Moscow. Lavrov and counterpart Wang Yi met in the eastern Chinese province of Anhui today.

The key allies spoke of their joint plans for a ‘just, democratic world order’ in a sign of strengthening ties during a period of heightened global tensions after Putin‘s savage Ukraine invasion.

Russia is looking to China for support and partnerships as it becomes ever more isolated from global financial systems and supply chains.

China is hosting two days of meetings on Afghanistan but the ministers instead slammed sanctions and spoke about the situation in Ukraine.

The invasion is viewed as a bellwether on China’s stance towards Taiwan, which like Ukraine is considered highly vulnerable to an attempted land grab from its superpower neighbour.

Nicola Peltz stuns in Valentino bridal gown as she ties the knot with Brooklyn...