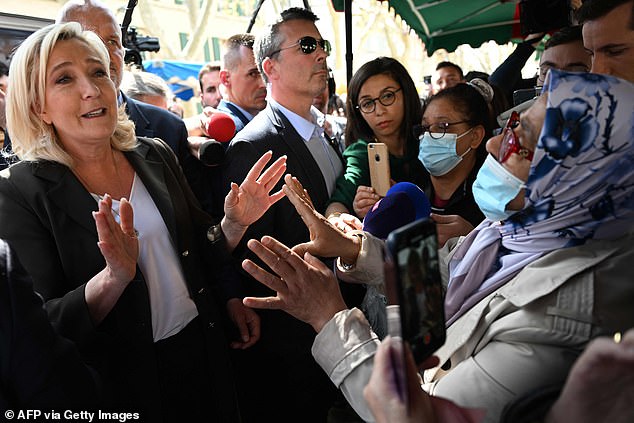 Marine Le Pen was confronted by two women in hijabs during a fiery visit to a food market in the south of France today.

If elected president in the second round run-off on Sunday, April 24, Le Pen would ban all Muslim head coverings in public – and fine those caught wearing them.

Earlier at the Petruis, Provence food market, an elderly Muslim woman in a white veil called Le Pen over and asked her: ‘What is the headscarf doing in politics?’

‘In France, I don’t want any women to be judged…’ 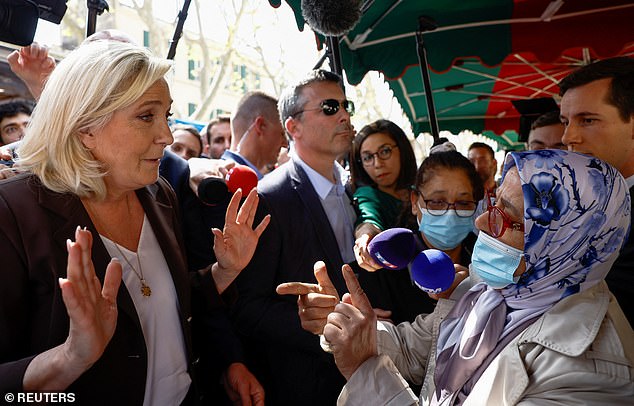 Not satisfied with Le Pen’s answer, the woman said: ‘No. For me it is a sign of being a grandmother.’

The pair continually interrupted each other before Le Pen smiled and walked away.

Soon later a 70-year-old woman of Algerian origin challenged Le Pen. She asked the presidential candidate why she supports banning the veil.

Le Pen replied: ‘The headscarf is a uniform imposed over time by people who have a radical vision of Islam.’

The runner-up in the first round of the French presidential election explained she would fine any woman seen wearing a headscarf in public.

She told RTL radio last week: ‘People will be given a fine in the same way that it is illegal to not wear your seat belt. It seems to me that the police are very much able to enforce this measure.’ 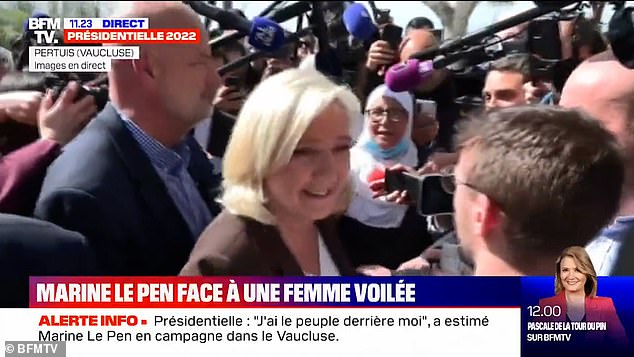 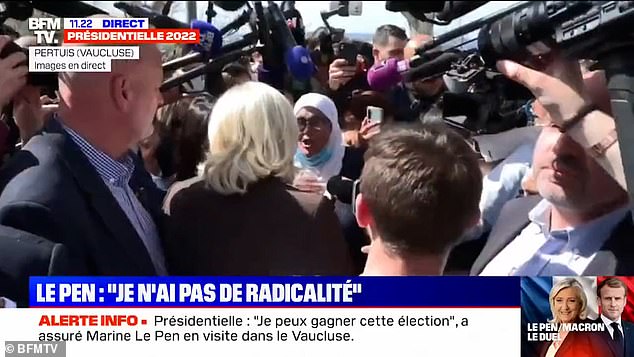 The elderly woman accosted Le Pen, asking: ‘What is the headscarf doing in politics?’

Le Pen has tried to tone down her anti-immigration rhetoric during this year’s campaign in an attempt to move toward the centre.

Meanwhile President Macron has sought to avoid the issue of veils, stating: ‘For me personally, the question of the headscarf is not an obsession.’

He previously courted controversy by supporting legislation in 2020 which argued the hijab is a symbol of ‘Islamic counter-society’ and ‘divides men and women’.

Crowds gathered to see the National Rally candidate’s surprise appearance in Pertuis, Provence, with some shouting anti-fascist slogans and others singing the Marseillaise. 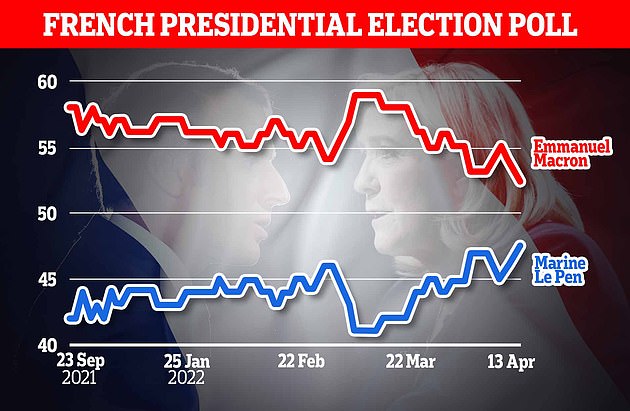 Immigration: Reform the asylum system to make it more efficient, long-stay permit is only given to people who pass a French language exam and are professionally successful

Pensions: Raise the pension age from 62 to 65 to keep the pension system afloat. Minimum pensions would be raised to €1,100 a month

Cost of living: Lower VAT on fuel and energy from 20% to 5.5%. Income tax for under-30s scrapped as well as TV licence fee. Highways renationalised

Pensions: Drop pension age to 60 for those who started work before 20

Scuffles got ugly when a young anti-fascist woman tussled with two male Le Pen supporters, prompting one to ward her off with a small step ladder.

The far-right candidate is closing the gap with Macron ahead of the second round of the country’s presidential election, according to a poll published earlier this week.

The OpinionWay-Kea Partners poll released by Les Echos and Radio Classique on Tuesday showed Le Pen narrowing the gap by one point as voter turnout continued to fall, although Macron would still win the run-off with 54 per cent of the vote.

Le Pen secured a run-off against the president in the French elections after she received 23.15 per cent of the vote in the first round on Sunday, just four points behind Macron and the best-ever showing by a far-right party.

Le Pen has also vowed to hold a referendum on reintroducing the death penalty in France and ban wind farms.

Macron slammed the idea as the latest sign of Le Pen’s ‘authoritarian drift’.

He told France 2 television on Wednesday: ‘Despite all the efforts, the true face of the far-right is coming back. It is a face that doesn’t respect freedoms, the constitutional framework, press independence and fundamental freedoms, rights.

Le Pen said the show whose journalists were refused accreditation was entertainment rather than journalism and that she reserved the right – now as a candidate, and later as president if elected – to choose who may attend her news conferences.

She retorted that Macron was showing his ‘weakness’ and was in no position to give lessons on how to handle the press.

Macron has had a bumpy relationship with the media during his presidency and last week was criticised for refusing to take part in several prime time shows ahead of the first round.

‘He’d be better off going into the substance of my project. It is known, transparent. We can discuss it and argue over our disagreements,’ Le Pen said at a campaign stop outside of Paris.

How junior fees higher than $2500 are blocking Socceroos and almost cost them Garang...

COVID-19 BA.4 and BA.5 variants make up more than HALF of US cases