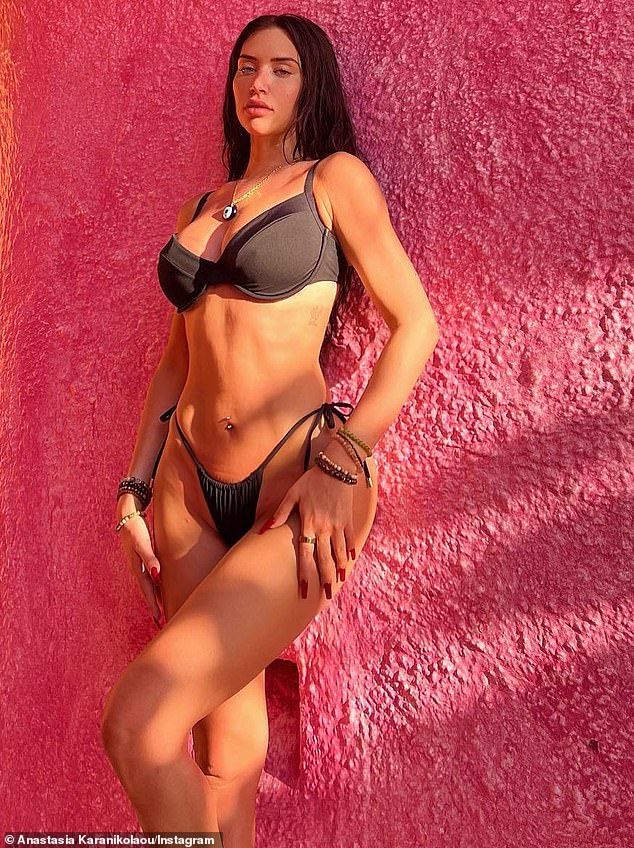 The model and entrepreneur, 25, uploaded the sultry photo series to her nearly 11 million followers on Instagram earlier on Monday.

The media influencer glowed as she modeled a two-piece swimsuit, and typed out in the caption of the latest post, ‘on ur mind.’

Wow! Anastasia Karanikolaou, 25, showcased her fit physique in a black bikini in new Instagram post she shared earlier on Monday

The beauty took an assortment of snaps in front of a vibrant pink wall that was part of a building in the scenic, waterfront town.

A stream of sunlight could be seen shining on the wall as Stassie showcased a few of her signature poses.

The star accessorized her look with various beaded bracelets on her wrists along with a chained necklace with a black and white pendant.

She flaunted her toned midriff and fit physique as she sported a two-piece, black swimsuit from the brand, Monday Swimwear. 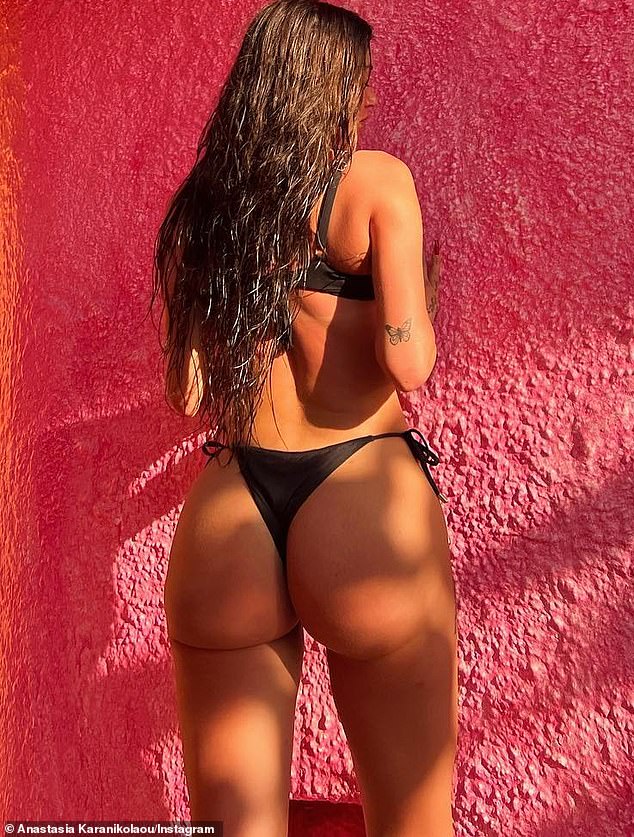 The black bikini top can be purchased at $94 and the drawstring ribbed bottoms are priced at $75, according to the brand’s official website.

Her brunette hair was parted in the middle and flowed down behind her in light, natural waves.

Anastasia has recently uploaded other photo collections capturing moments amid her tropical getaway with a couple of her close pals, such as Manifest actress, Luna Blaise.

Earlier on Sunday, the businesswoman uploaded snaps of herself lounging on a concrete ledge covered with shallow water.

While donning a colorful orange and green bikini, the beauty posed for a few pictures with the shimmering, blue ocean sprawled out behind her. 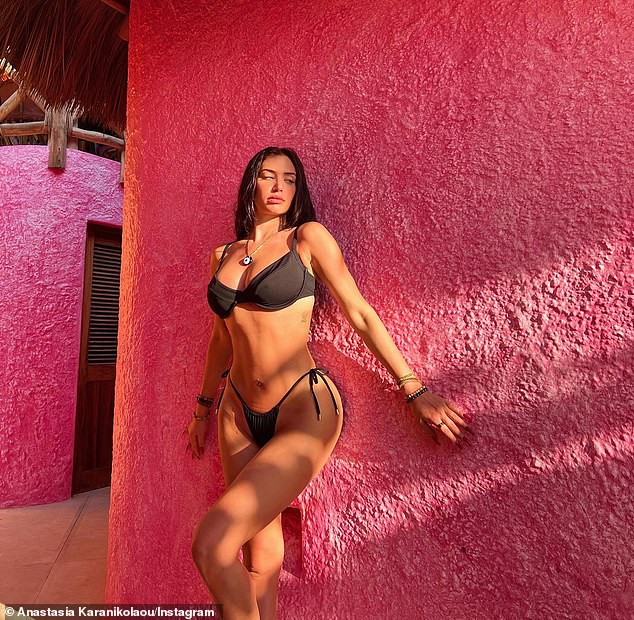 Having a blast: The businesswoman has been sharing photo collections to her fans capturing special moments from her tropical getaway 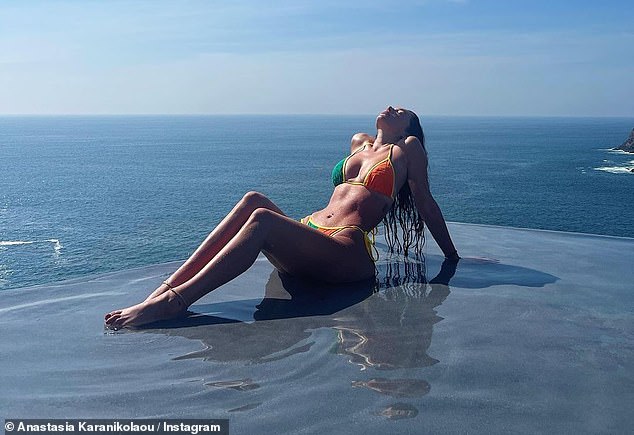 Beautiful: Stassie shared a series of snaps earlier on Sunday as she posed on a concrete ledge filled with shallow water with the ocean sprawled out behind her

Stassie has been enjoying downtime in her busy and on-the-go schedule. The media star recently ventured into creating her own home décor brand called, Stassie by Anastasia Karanikolaou.

During an interview with Gotham Magazine, the model opened up about starting the home collection.

‘My inspiration for Stassie by Anastasia Karanikolaou came from my love of minimalistic yet sophisticated design, which is simple and light, yet beautiful,’ she explained.

The entrepreneur additionally expressed one of her main goals she wanted to achieve with the brand.

‘When I was creating Stassie by Anastasia Karanikolaou, it was important to me that this collection was accessible, affordable, and genuinely made people happy when they interacted with the products every day.’ 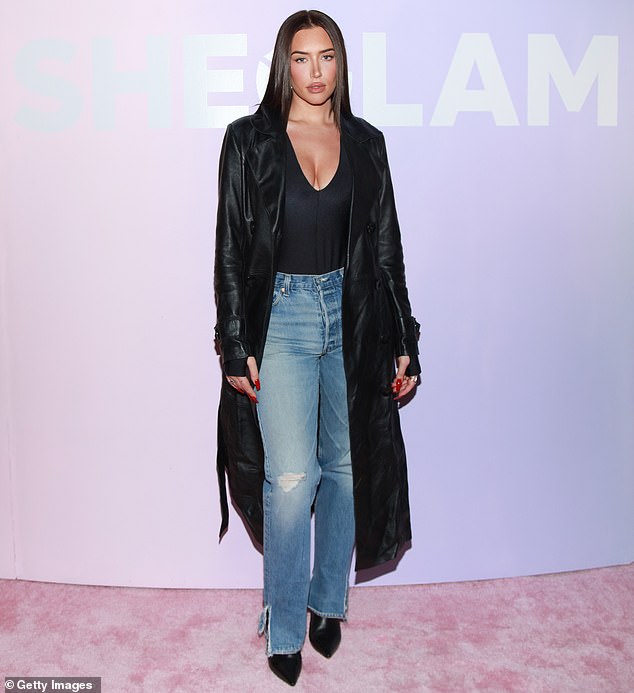 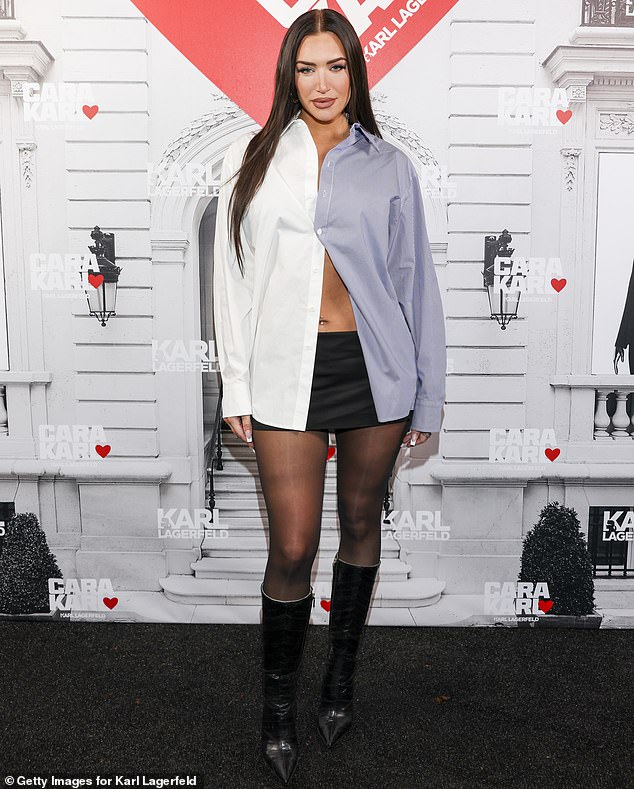 Talented: The mogul has had many collaborations, including working with her BFF Kylie Jenner with Kylie Cosmetics; seen in September during Paris Fashion Week

Past ventures that Anastasia has been a part of included her recent collaboration with BFF Kylie Jenner.

Earlier this year in June, the two friends launched their own Stassie X Kylie Collection with the famed Kylie Cosmetics.

During an interview with People, the media star opened up about her long-lasting friendship with the TV personality.

‘We know too much about each other. We’re stuck with each other forever,’ she stated. Both Kylie and Stassie first crossed paths when they were young teenagers.

She further explained that her mother had dealt with addiction growing up, and stated that her friendships are monumental in her life. ‘My friends have always been my rock. My friends are my family that I was able to choose.’ Best friends: Stassie opened up about her friendship with Kylie, and stated, ‘We know too much about each other. We’re stuck with each other forever’

Oklahoma executes Benjamin Cole for 2002 murder of his baby daughter despite mental illness...

Putin the ‘meddling colonel’: Russian president is making tactical decisions for his troops