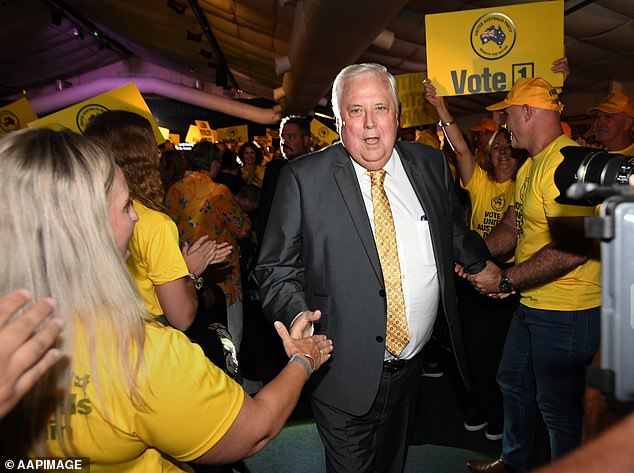 Billionaire mining tycoon turned politician Clive Palmer thought he was tackled by a protester when he fell off a stage and hit his head.

Mr Palmer, 68, was knocked out in the fall at a rehearsal for his United Australia Party campaign launch at his Coolum resort on the Sunshine Coast on Friday.

First-aid was administered and he was taken to hospital and later discharged with a nasty egg on his head but is recovering well.

‘Well I went to jump on the stage and I can’t high jump like I used to. I’m now 68,’ Mr Palmer told reporters on Saturday.

‘I hit it and ricocheted off the stage and hit my head… I was knocked out for about 20 seconds. Had a scan. I really do have a brain in there between my two ears.

‘It took me back to when I played for Southport Tigers rugby league… When I came to I looked around to see who’d tackled me.’

The fall is the second in recent weeks for Mr Palmer who previously stumbled on stage at the National Press Club, though he avoided injury.

Earlier this year the politician, who is unvaccinated for Covid, caught the virus and was treated at Pindara Hospital on the Gold Coast in February.

A team of specialist doctors who also treated Donald Trump were brought in to help and he was fast-tracked onto a US drug trial which included the antiviral medications invermectin and hydroxychloroquine.

The two drugs are controversial with neither officially approved to treat Covid in Australia.

Mr Palmer on Saturday said doctors gave him the ‘all clear’ to return for the official launch event later that day.

About 1,000 people attended the launch decked out in yellow t-shirts and baseball caps, cheering as Mr Palmer took the stage, in a scene reminiscent of an American political rally.

‘We care about our community and we are going to fight hard to protect it,’ Mr Palmer declared to the crowd. 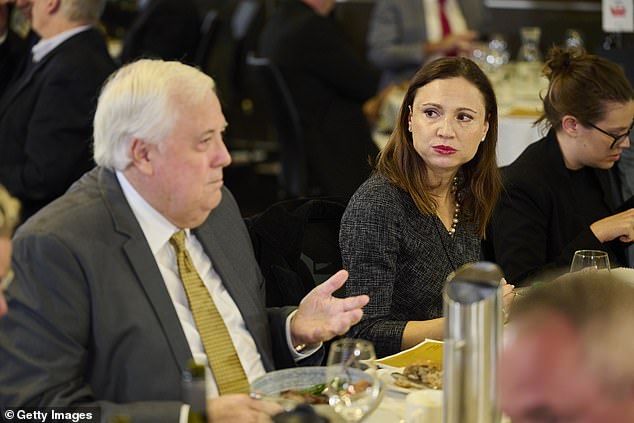 He said Australia’s trillion dollar debt racked up by Liberal and Labor governments could be brought back to zero by ‘getting the Chinese and Japanese to pay for it when they buy our iron ore’.

Mr Palmer, chairman of the UAP, introduced leader Craig Kelly who said 80 per cent of Australians were at risk of default on their mortgages when interest rates rise.

‘We will pass a law limiting all home loan interest rates to be below 3 per cent interest rate for the next five years,’ he said.

He also promised to stop ‘mass biometric surveillance’ he claimed the government was using to ‘spy on’ people. 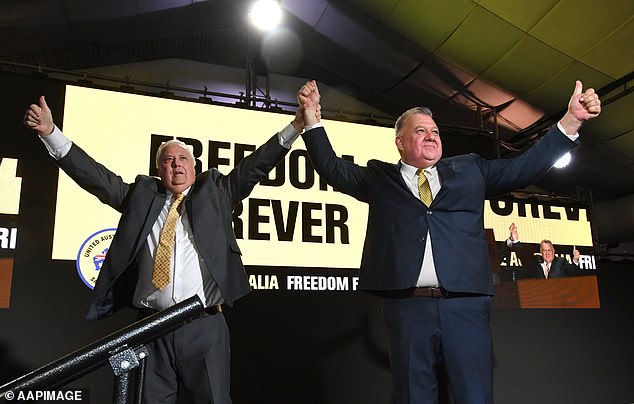 ‘People rattle on talkback radio about un-Australian, well let me tell you, that big giant heap of nothing is the most un-Australian thing I have ever seen,’ he told the crowd.

He claimed Mr Palmer was ‘not fit to hold public office’ mentioning the collapse of his Queensland Nickel mine which went into liquidation in 2016.

‘You’ve seen fat boy up close, you know what a total wank this is,’ Mr Garret said.

Mr Palmer responded to the comments while leaving his campaign launch.

‘I think Peter is a very intellectual guy and if he thinks I’m a big heap of nothing he can read The Australian that says I’ve got about $18.5 billion which is a lot more than he’s made in his life from singing songs and whistling,’ he said.

‘I like Peter Garrett, I buy his songs and I sing to his music, I think he’s a nice guy but I never insult him by saying something like that about him, so he must be under pressure in his marriage or something like that must’ve gone wrong to make him so angry.’

Broadmeadows, Melbourne: Car crashes into childcare centre just as it was opening for the...