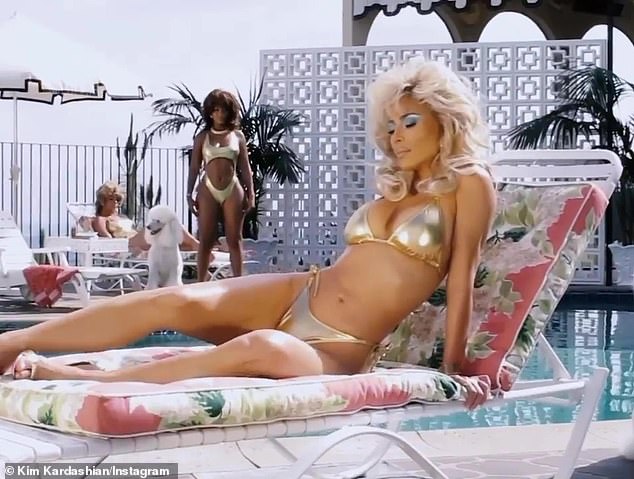 Kim Kardashian transformed into an ’80s blonde bombshell on Friday, as she unveiled a sizzling commercial for her new SKIMS metallie swimwear line.

The 41-year-old Hulu reality star – who has been showing off the results of her recent 21lb weight loss – was a total knockout with her newly-blonde hair styled into a huge bouffant, and wore dramatic blue eye makeup.

Earlier,  gave fans a sneak peek of the line as she squeezed her famous curves, and now very trim waist, into a skintight silver-metallic two piece with matching Balenciaga shades.

Kim stood in front of the mirror in her bathroom to take the selfie with her toned body on full display and flashing ample cleavage in the SKIMS bikini top.

Her recently bleached blonde hair was tied back into a messy bun as she titled her head to the side to perfect her pose. 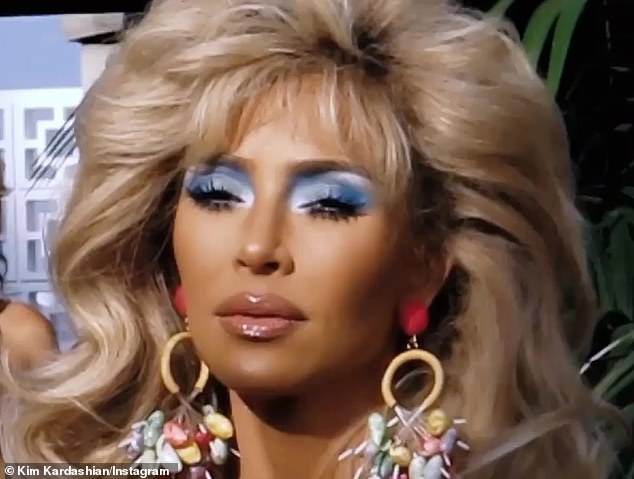 New look: Kim was a total knockout with her newly-blonde hair styled into a huge bouffant, and wore dramatic blue eye makeup

The perceived ‘thirst trap’ as they are known, comes after her boyfriend Pete Davidson denied dating singer-songwriter Olivia O’Brien.

The 22-year-old O’Brien was taken by surprise when Barstool Sports founder Dave Portnoy asked about her dating the 28-year-old Saturday Night Live star in October 2020, before he dated Bridgerton star Phoebe Dynevor.

She seemingly confirmed that they dated before he broke it off via text, though a rep for Davidson (via E!) said that her claims aren’t true.

‘There is no truth to this. [We] were friends and hung out one time,’ a rep for Davidson said. 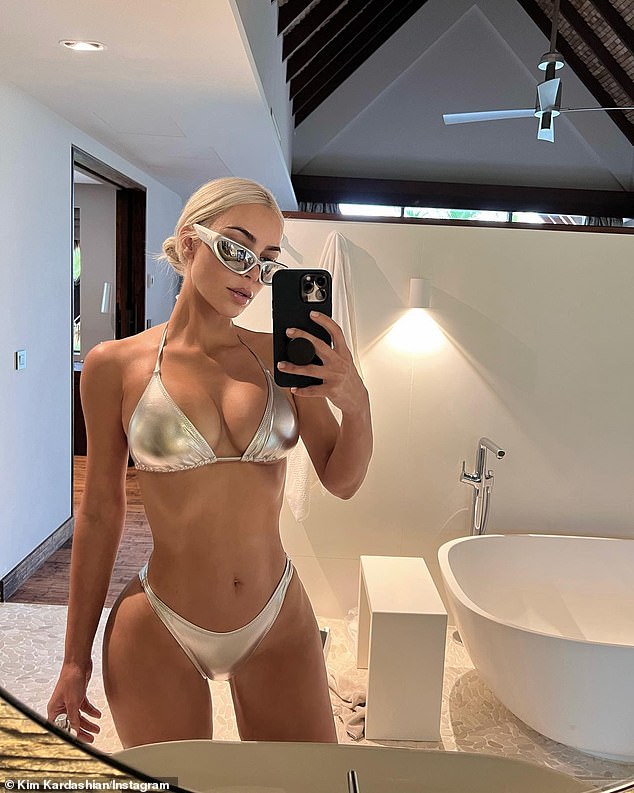 Wowza: Kim Kardashian shows off 21lb weight loss in a VERY skimpy metallic bikini as she teases more swimwear from her SKIMS line 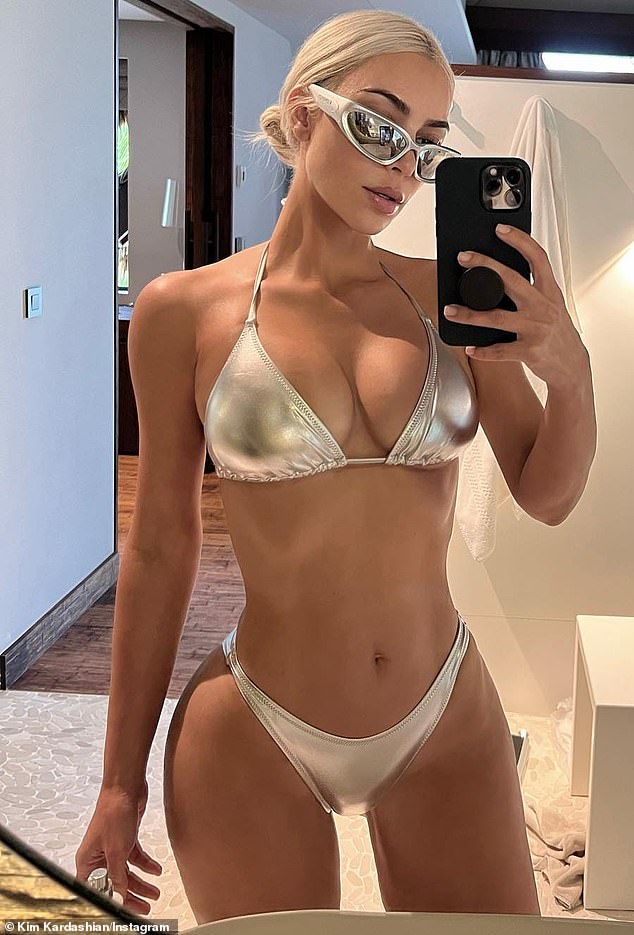 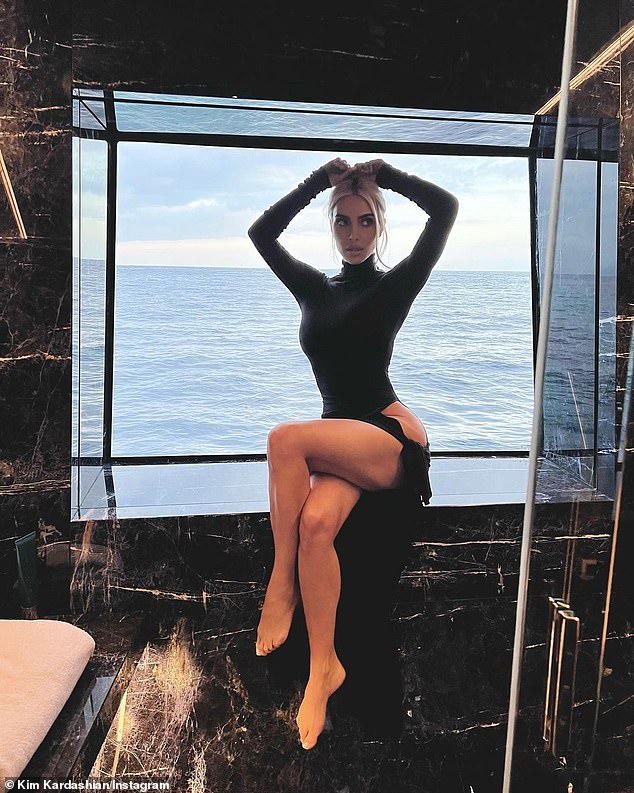 Raunchy: Yesterday, the 41-year-old posted this leggy snap to her Instagram

O’Brien first revealed her supposed relationship with Davidson on the BFFs podcast, where Portnoy asked, ‘what’s going on’ with her and Pete.

Olivia went on to reveal that they had dated in October 2020 but insisted she didn’t think ‘anyone knew about that.’

She did not give many other details on their relationship but did say that he ended things over text. 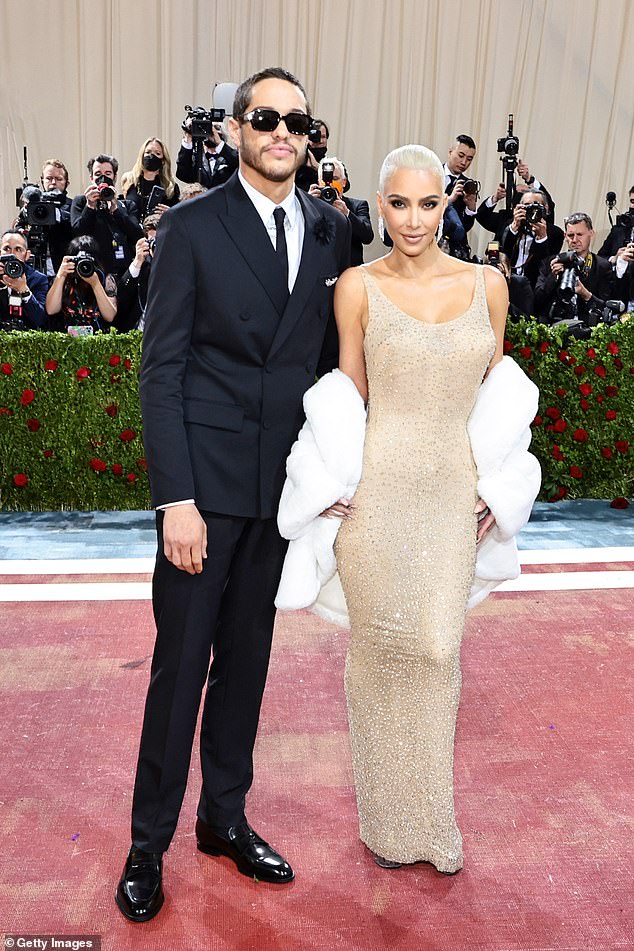 Mrs B.D.E! After being known for speed dating around the Hollywood A-List crowd, Pete Davidson appears to have found something significant with girlfriend Kim (Pic; May)

Pete went on to date Bridgerton actress Phoebe Dynevor for five months from March to August in 2021.

Kim and Kanye split in February 2021, with the SKIMS founder filing for divorce and being declared legally single by March 2022.

She kicked off her unlikely romance with Pete in November of last year after sharing a televised kiss during her first-ever Saturday Night Live hosting gig in October.

Kim has continued to date Pete and has even opened up about their romance in recent interviews, as well as on her family’s new Hulu series The Kardashians. 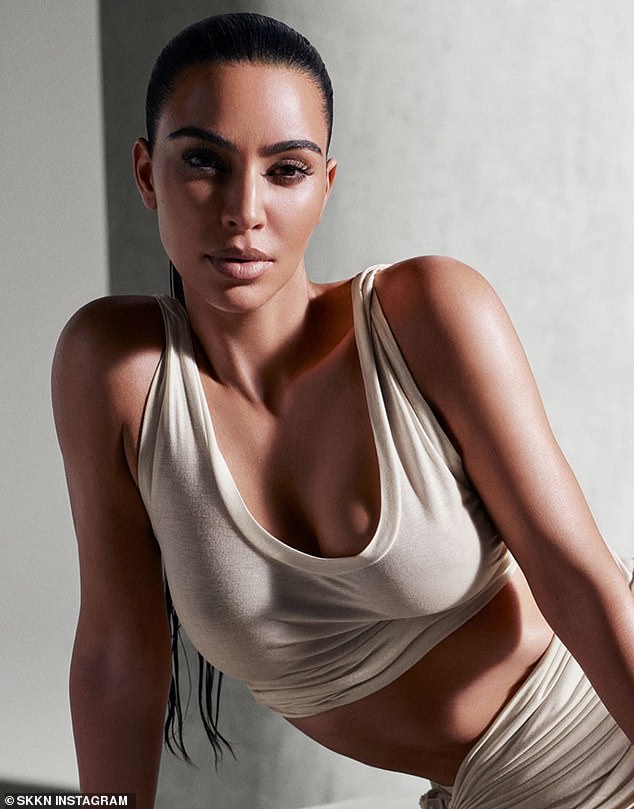 The busy life of a reality mogul: As well as shapewear brand SKIMS, Kim is also currently launching her skincare line SKKN

Woman found a receipt for Viagra in her partner’s pocket after a night out...

Plus-size woman hits back at nasty trolls who say her toned husband should be...

Scout Willis shares a smile with her father Bruce Willis as she shares sweet...