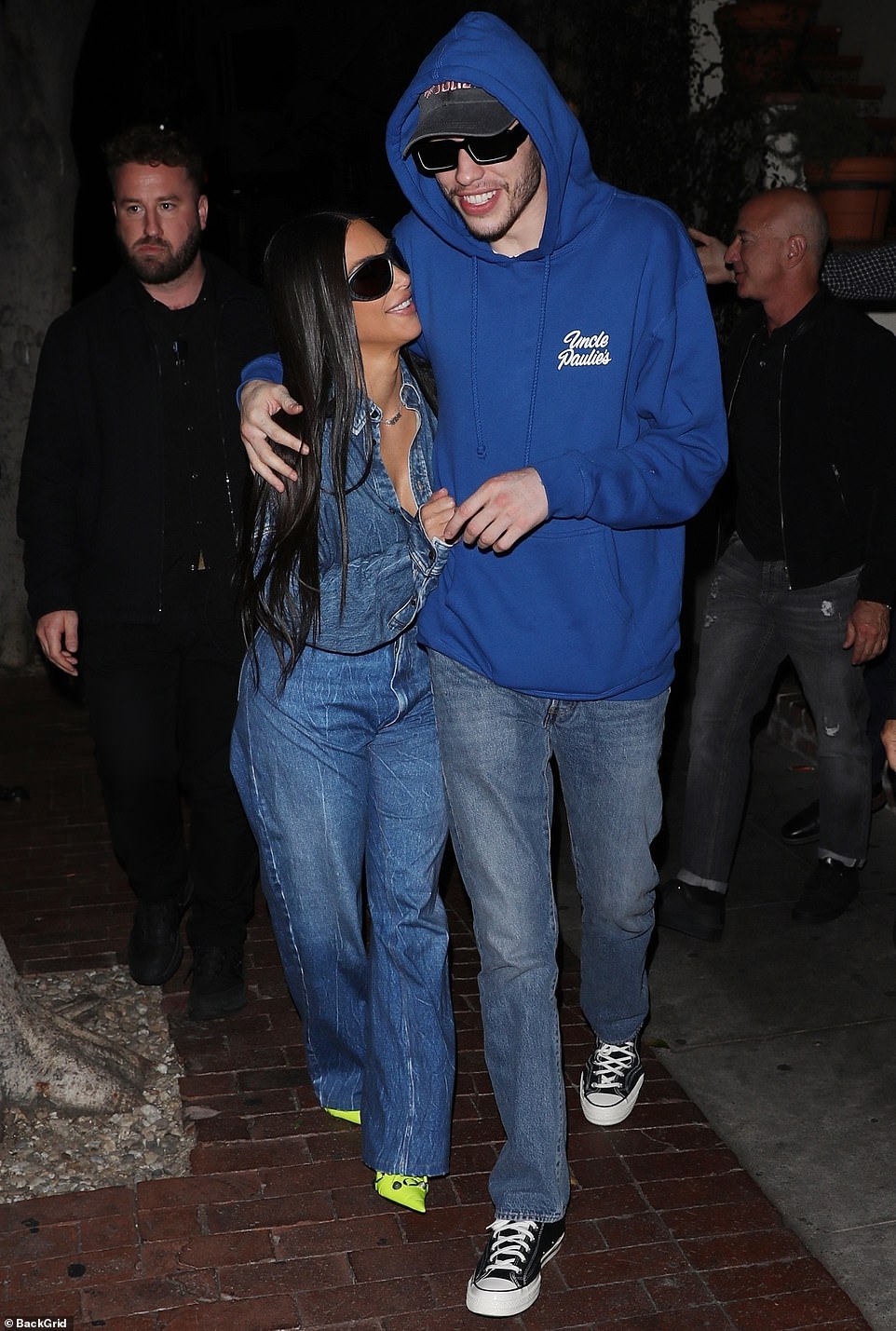 Kim Kardashian and her boyfriend Pete Davidson hit the town for a double date on Monday night – with none other than Amazon founder Jeff Bezos and his girlfriend Lauren Sanchez.

According to sources, the foursome enjoyed a lengthy dinner, spending several hours together before departing the eatery and getting into separate vehicles – while accompanied by several burly-looking security guards.

The dinner appears to have gone well judging by Kim and Pete’s expressions as they made their way out of the restaurant, with both grinning from ear-to-ear as they headed into their waiting vehicle, which Pete drove away.   Jeff and Lauren were seen following behind the celebrity duo, before getting into the back of a car, which had two men seated in the front. 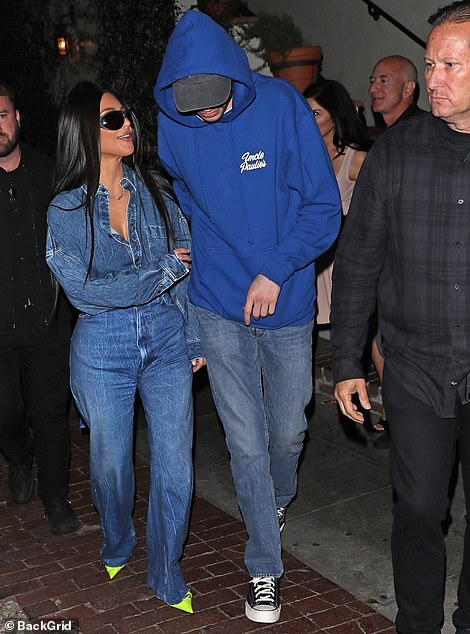 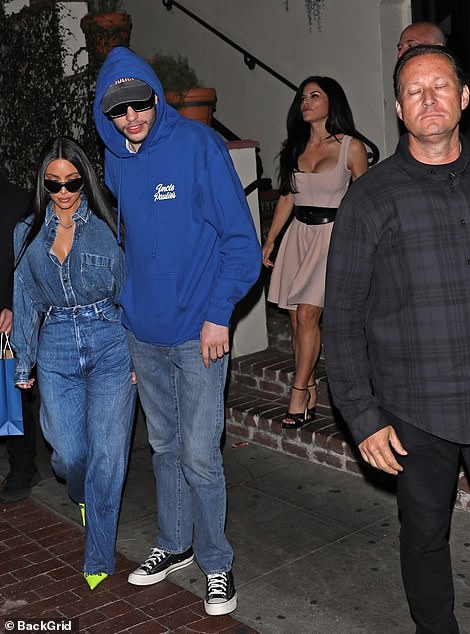 Kim, 41, and Pete, 28, were seen leaving A.O.C. restaurant in Los Angeles arm-in-arm, and they were closely followed by Jeff, 58, and Lauren, 52 – all of whom appeared to be accompanied by several burly security guards 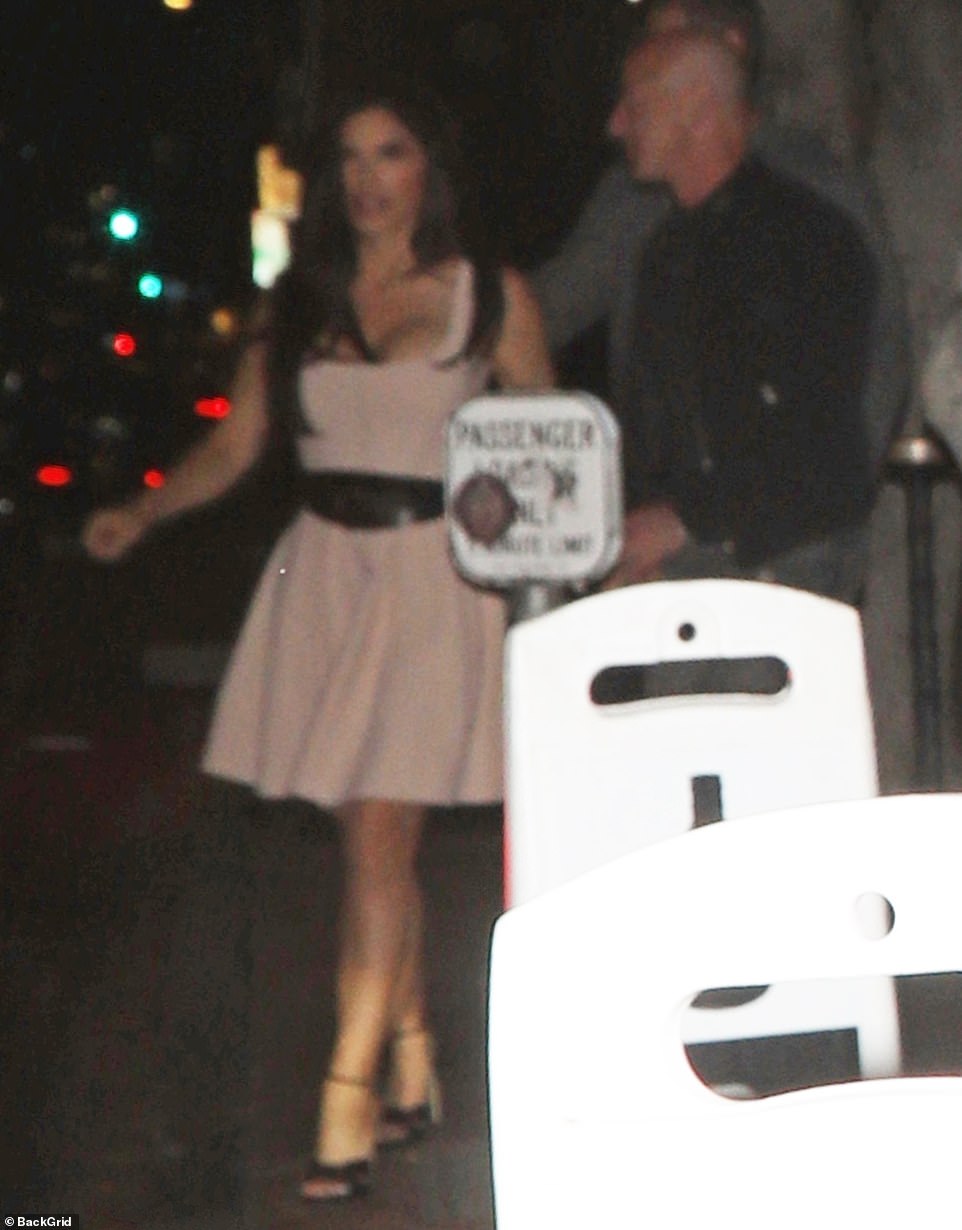 Lauren put on a chic display in a beige dress, black belt, and black heels, while Jeff wore a black bomber-style jacket

It is not the first time that Kim and Pete have enjoyed a lengthy meal with Jeff; the couple attended a dinner party at the billionaire Amazon founder’s $175 million Los Angeles home back in January – and less than two months later, it was announced that SNL star Pete would be joining the CEO’s most recent Blue Origin space flight, which was due to take place last month. 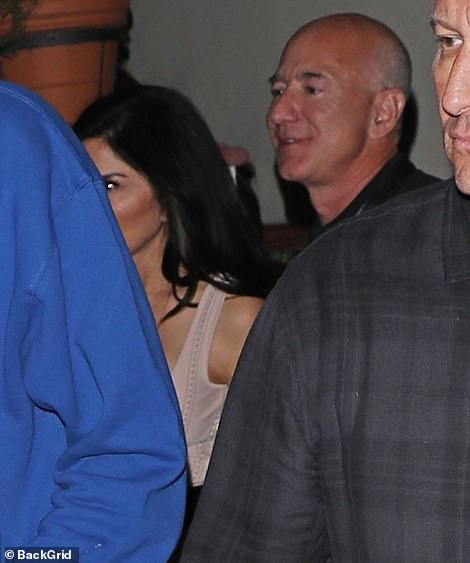 Although Pete ultimately dropped out of the mission when it was moved from March 23 to March 29 – hinting that scheduling conflicts were to blame – it seems there are no hard feelings between the foursome, all of whom appeared in good spirits at the end of their double date.

Their restaurant of choice – A.O.C. – is described by its founders as a ‘pioneering wine bar’ that pairs ‘an indulgent list of wines by the glass with a menu of market-driven small plates’, including Spanish fried chicken with romesco aïoli and chili-cumin butter, clams with sherry, green garlic and toast, and bacon-wrapped dates stuffed with parmesan.

Prices on the food menu range from $6 for the A.O.C. bread to $72 for a whole roasted chicken with panzanella, fennel and green olives. The restaurant also offers several private dining options.

Pete and Kim both put on a casual display for their dinner, with the reality star mother-of-four donning a double denim look comprised of jeans and a matching button-up shirt, while her partner was seen sporting a blue hoodie, baseball cap, and jeans.

Kim accessorized her look with some bright neon heels and she wore her long brunette locks in a straight style that hung down to her waist. 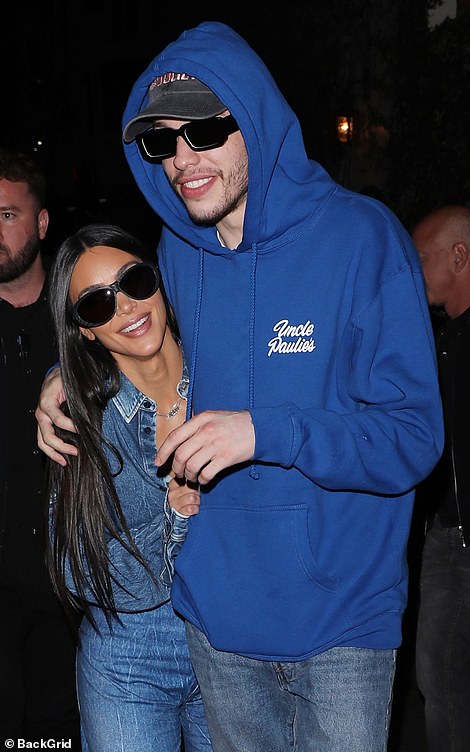 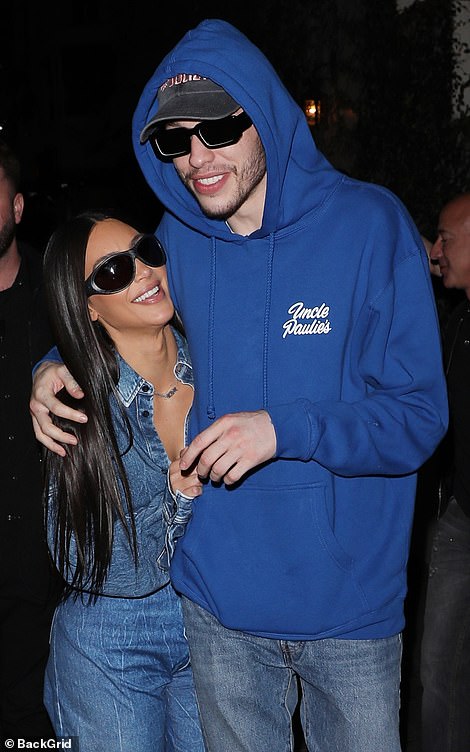 The couple were inseparable as they left the restaurant, with Pete putting an arm around Kim’s shoulder to pull her close to him as they made their way to their waiting vehicle 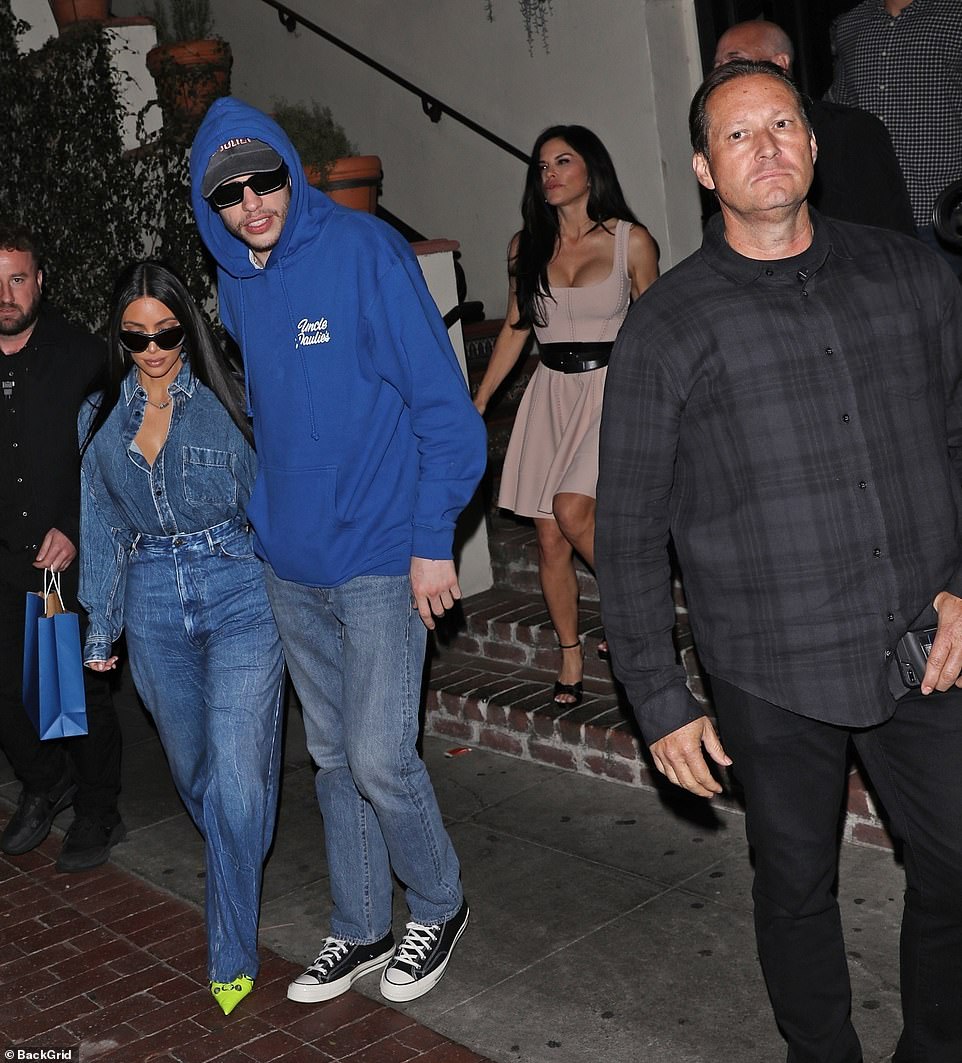 Kim and Pete both sported sunglasses as they left the restaurant, despite the late hour 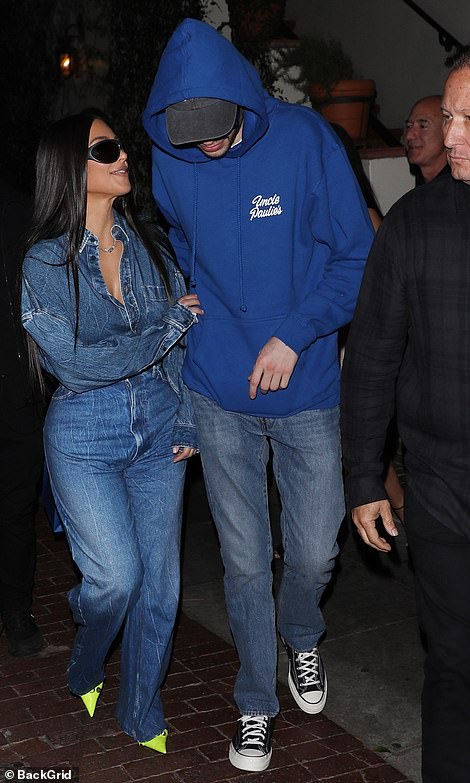 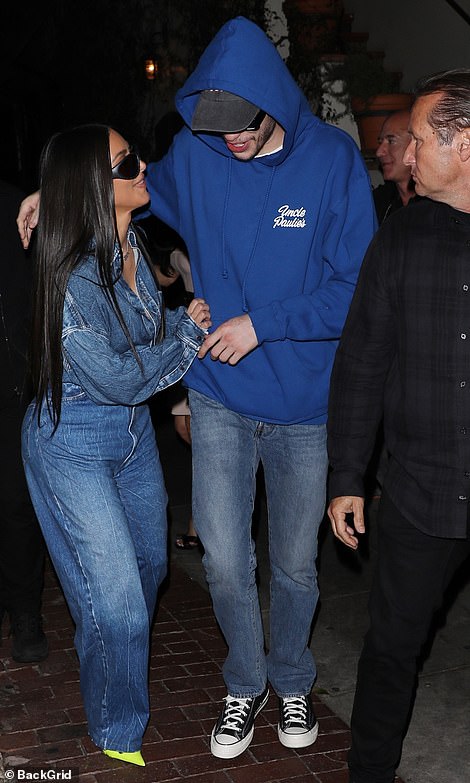 The group were joined by what looked like several burly security guards – and when Lauren and Jeff climbed into the back of their waiting car, two men were seen sitting up front to escort them home 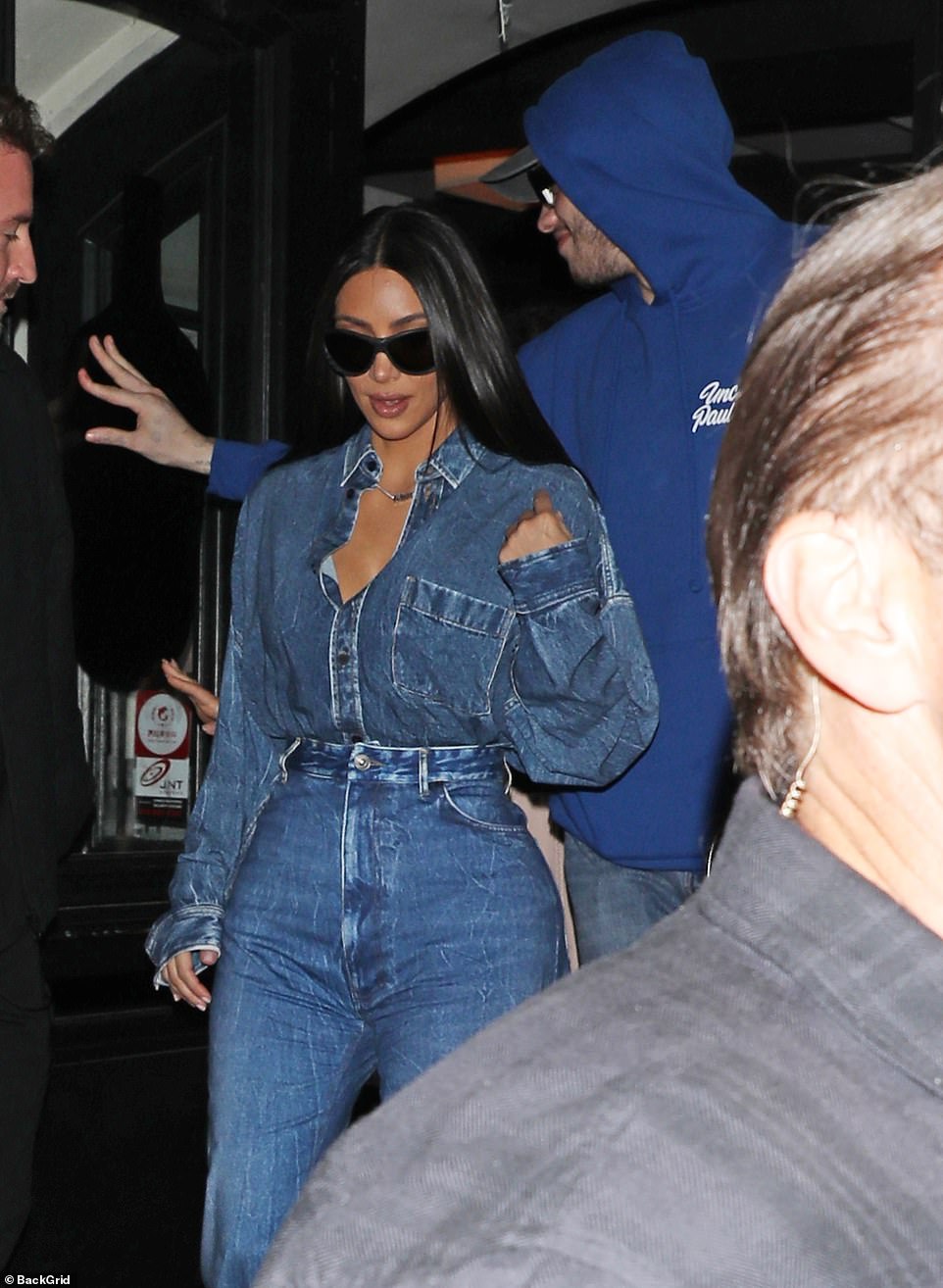 A doting Pete held the door open for his girlfriend as the pair exited the eatery, which is described by its founders as a ‘pioneering wine bar’ that pairs ‘an indulgent list of wines by the glass with a menu of market-driven small plates’

Meanwhile Lauren – who has three children with her ex-husband Patrick Whitesell – opted for a chic look in the form of a short beige dress, which she paired with a black belt and towering black heels, while her CEO partner donned a simple black bomber-style jacket.

Although the two couples might not seem like the most likely of dining companions, they actually have a fair amount in common – not least Kim and Jeff’s statuses as billionaire business founders.

Jeff is currently the second richest man in the world behind Tesla founder Elon Musk; he has an estimated net worth of $179.1 billion, according to Forbes.

Kim doesn’t boast quite such an impressive standing in the list of the world’s richest billionaires, on which she currently ranks 1,735 with an estimated net worth of $1.8 billion.

It is thought that Kim and Jeff have known each other for a couple of years now; the reality star was seen shaking the businessman’s hand at the Met Gala in 2019, apparently introducing herself to him, before the two enjoyed a quick chat and posed up for some photos.

Jeff’s appearance at the Met Gala that year came amid his divorce from ex-wife Mackenzie Scott and shortly after his affair with Lauren was made public. Their romance was thrust into the spotlight in January 2019, when the National Inquirer revealed that they had been having an affair. 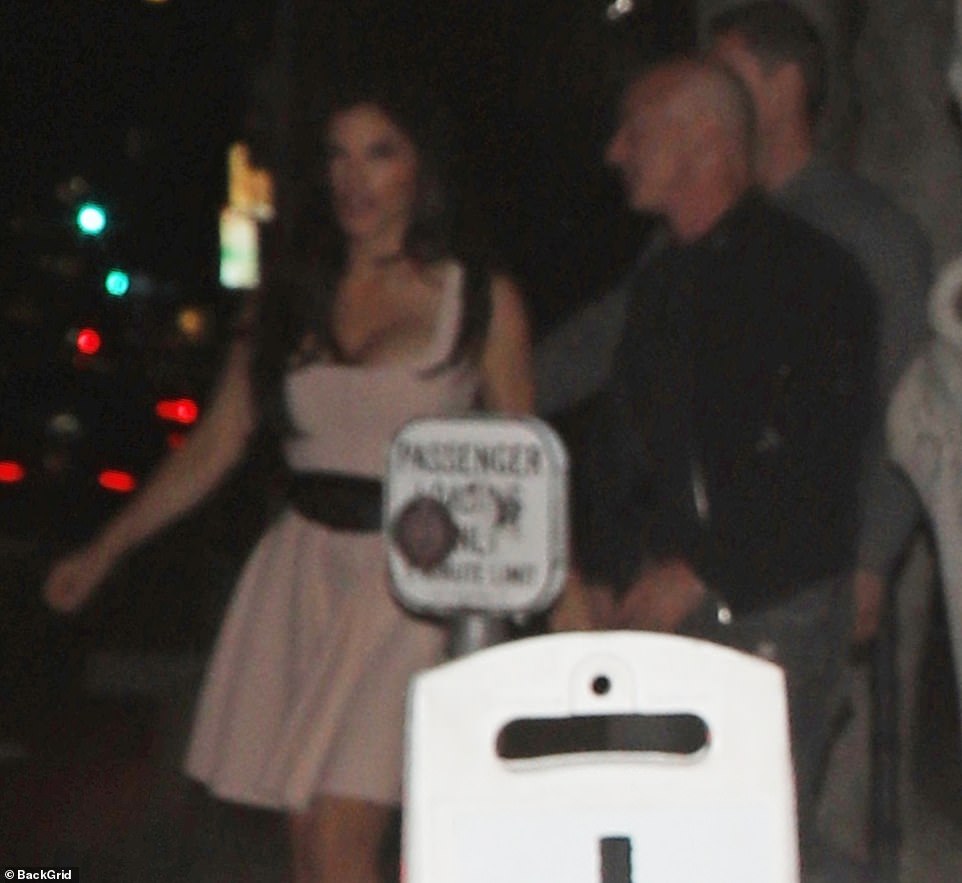 Lauren and Jeff were seen making their way to a waiting car, closely followed by a security guard 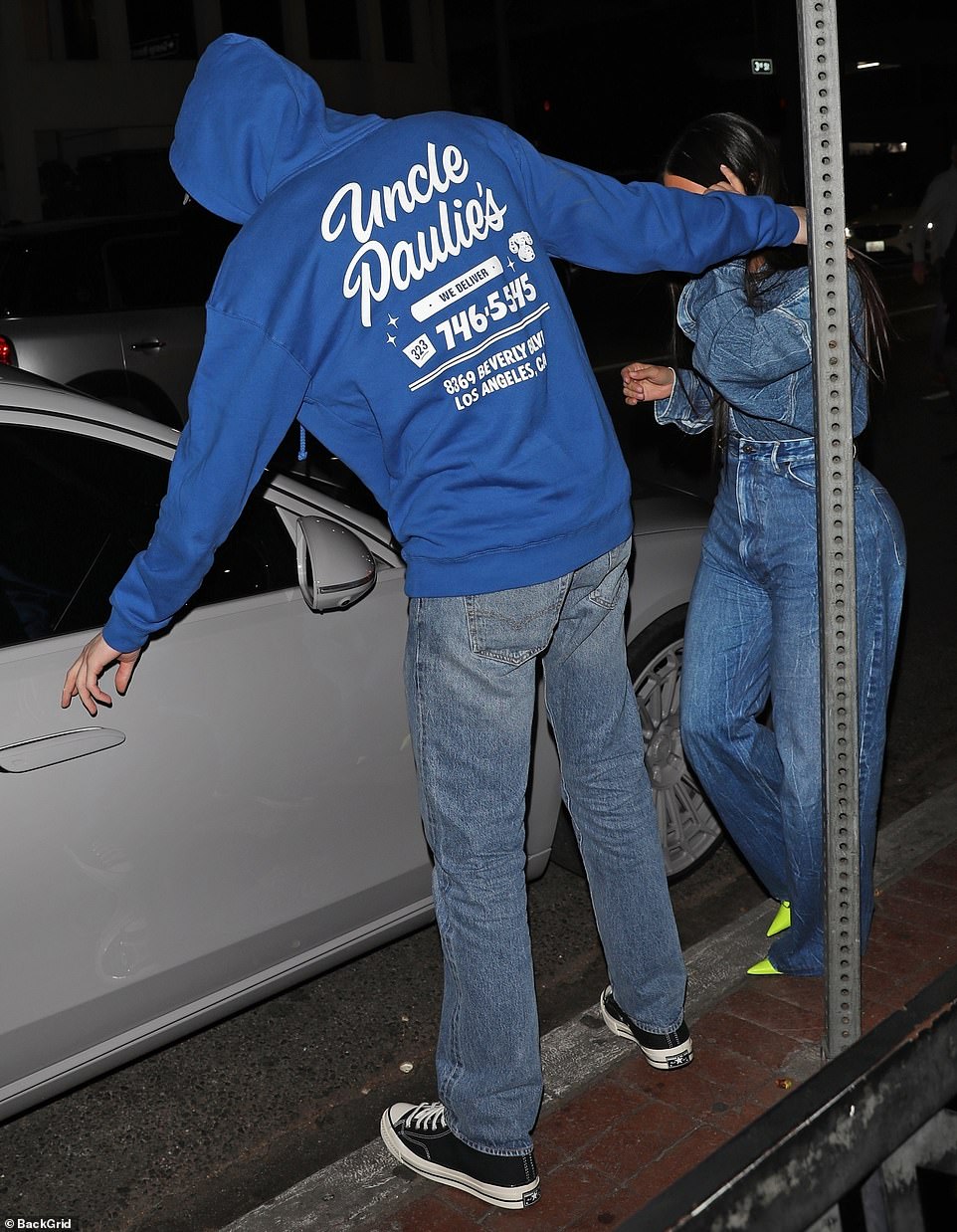 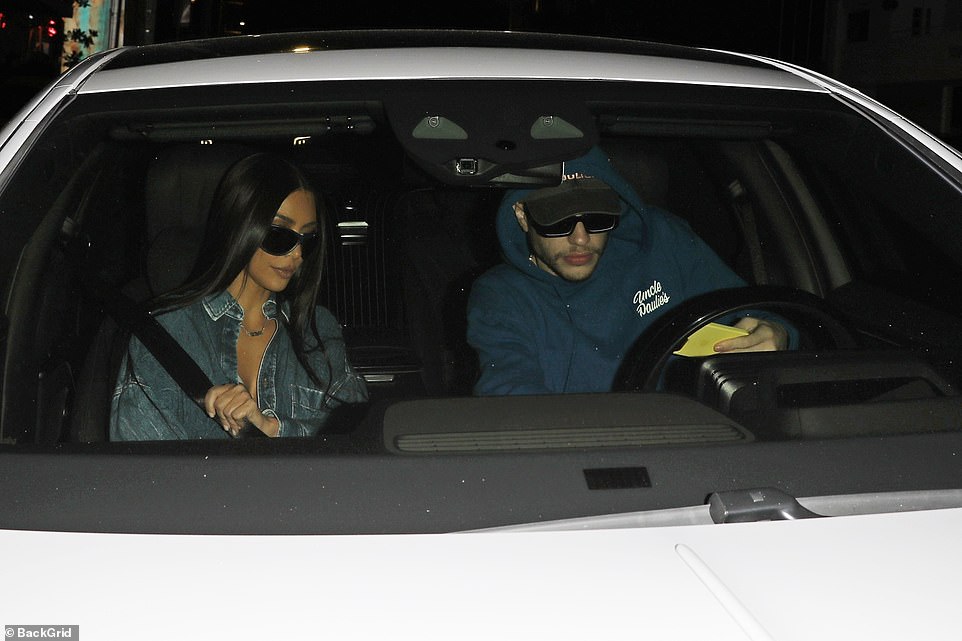 Pete was seen holding his phone in the hand and touching something on the dashboard of his car, before the pair drove away 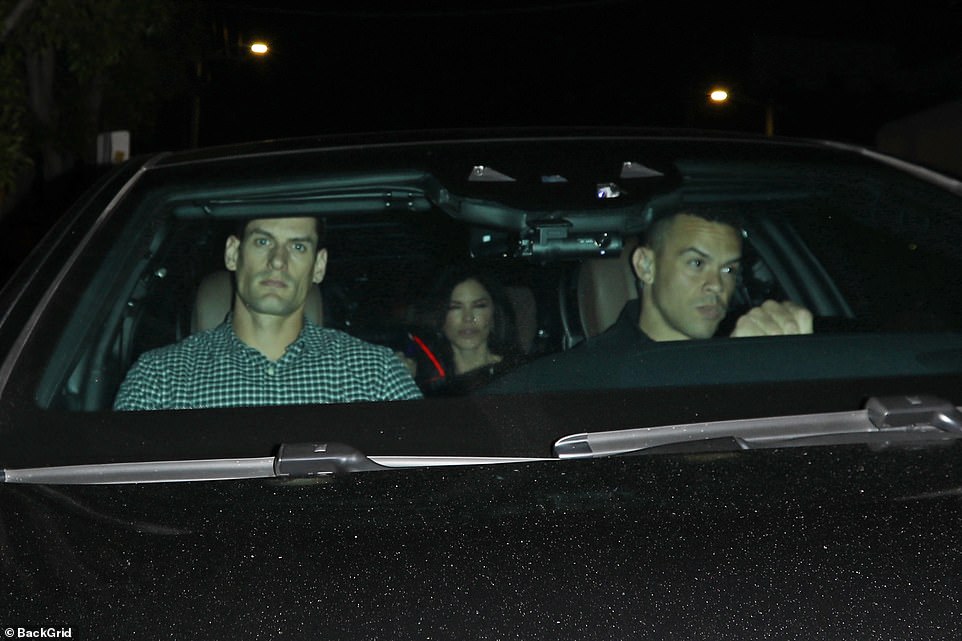 Meanwhile Lauren and Jeff were driven off by a burly-looking man, who was joined by a companion in the passenger seat of the car, while the couple sat in the back

Both Bezos and Sanchez have said their marriages were over before the affair came to light but neither has ever specified exactly when their romance started.

Kim and Jeff’s friendship appeared to deepen earlier this year when she and Pete dined at the Blue Origin founder’s home in California – although it is unclear whether Lauren was in attendance.

It was then revealed in mid-March that Pete had secured a spot on Jeff’s fourth Blue Origin space mission, aboard the company’s New Shepard rocket, which was initially due to launch on March 23.

However just days later, Pete pulled out of the flight after it was reschedule for March 29, with Blue Origin saying in a statement: ‘Blue Origin’s 20th flight of New Shepard has shifted to Tuesday, March 29. Pete Davidson is no longer able to join the NS-20 crew on this mission. We will announce the sixth crew member in the coming days.’

The group undoubtedly had plenty to chat about during their dinner – which came amid new reports about Kim’s upcoming Hulu reality show The Kardashians and the content of its premiere episode.

It was revealed on Monday that the debut installment of the series will capture Kim breaking down in tears while on the phone to her ex Kanye West during a conversation about the infamous 2002 sex tape she made with her ex Ray J. 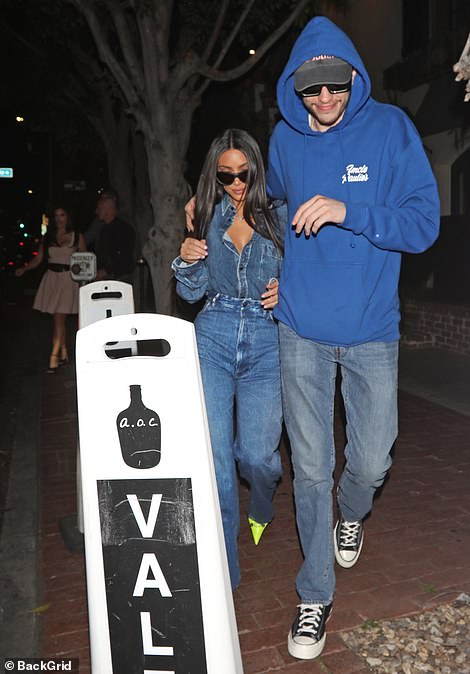 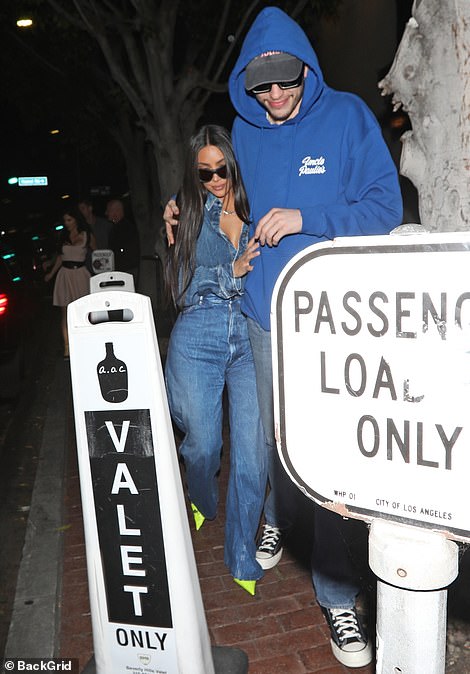 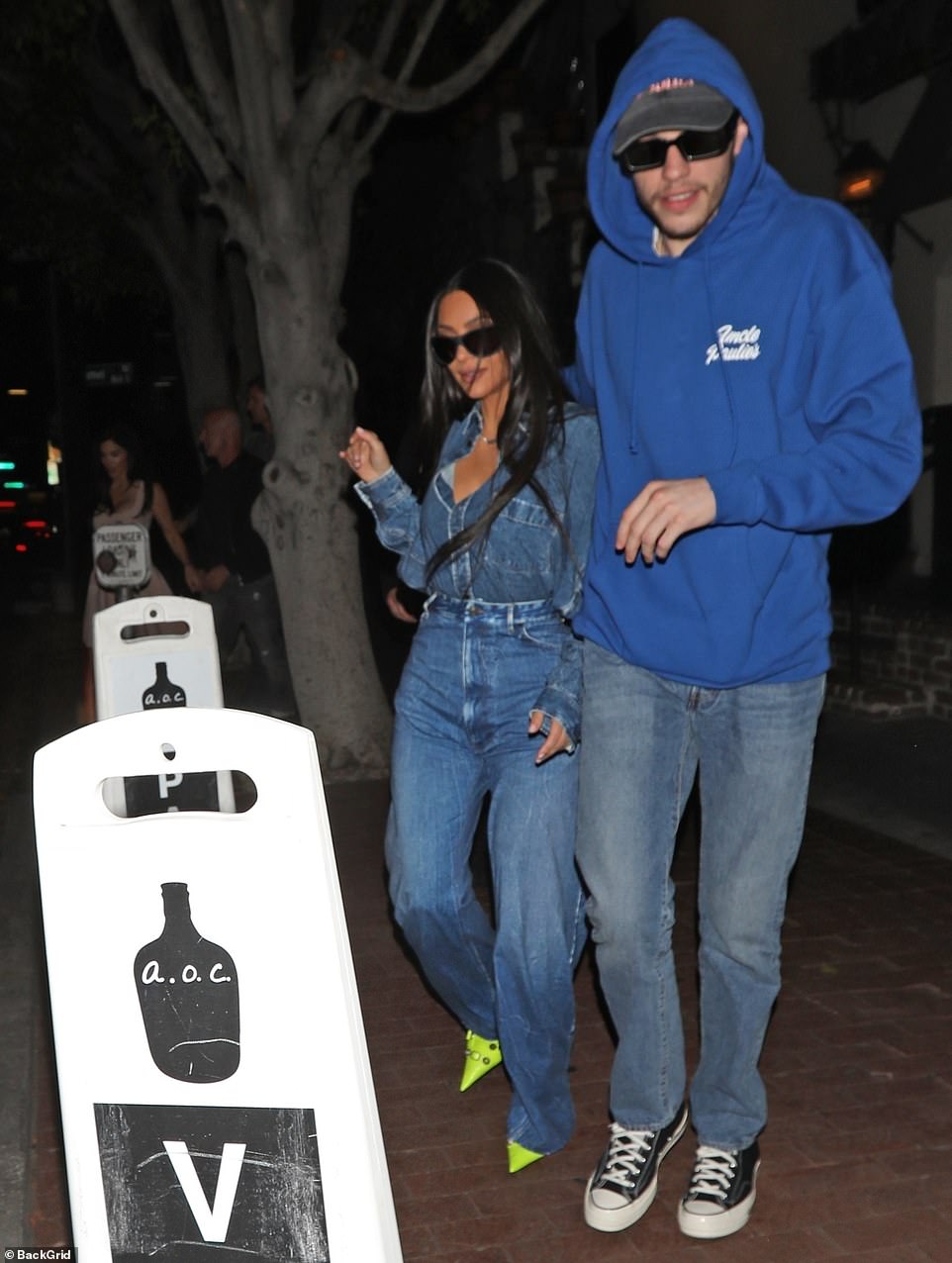 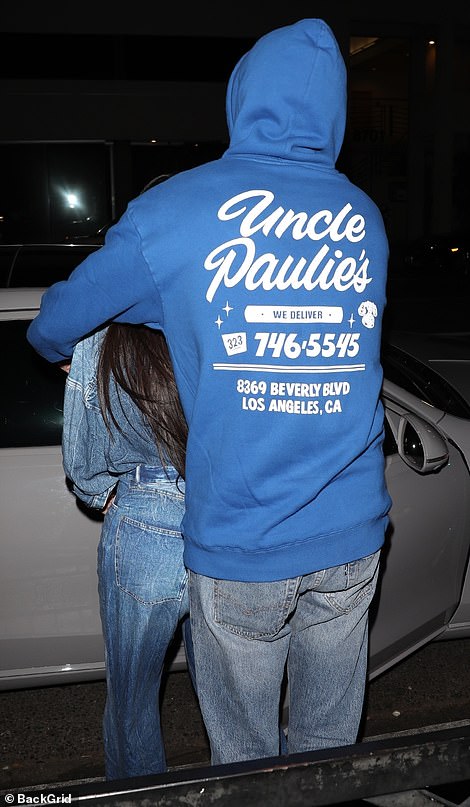 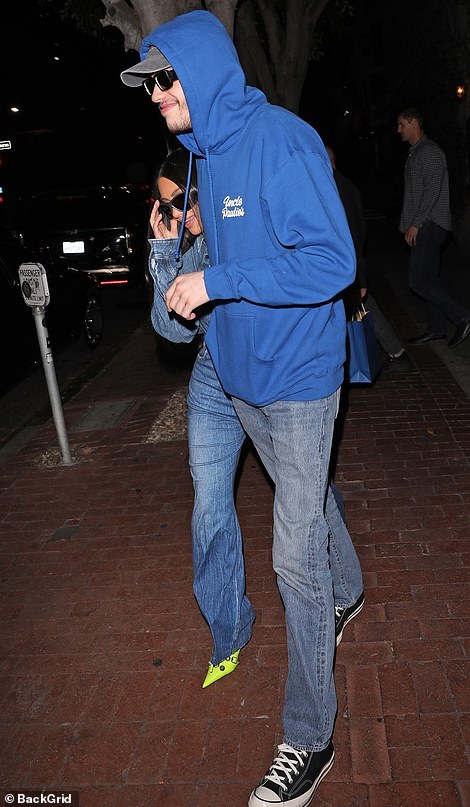 Although the sex tape is now 22 years old, it continues to haunt the star, whose son Saint, six, received a pop-up ad for alleged ‘unseen footage’ from the video while playing an online game on his tablet.

The premiere episode of the show documents the moment that six-year-old Saint ran up to his mother to show her a pop-up ad touting alleged unseen footage from her sex tape, which appeared on his tablet while he was playing an online game.

An emotional Kim is then seen talking to her lawyers about the sex tape, telling them that she will ‘sue’ over any unreleased footage and ‘burn’ anyone who is involved in re-releasing the tape ‘to the ground’, while admitting she ‘can’t go through this again’, according to the LA Times.

‘I don’t want it to be copied. I have four kids. I can’t go through this again,’ she says. ‘This was like 20 years ago. I’m not going to go through this again. I know the right attorneys this time. I know exactly what to do this time… I have all the time, all the money, and all of the resources to burn them all to the ground.’

However, the reality star adds that she is ‘99.9 per cent sure’ no other footage from the sex tape actually exists.

During an on-camera interview from the premiere episode, which will be released on Thursday, Kim once again opened up about her horror at Saint seeing the pop-up ad, which featured an oft-memed image of her crying.

In the scenes Kim explains her son Saint was saw the ad while he played Roadblox on his iPad, an online game which allows users to play and chat to one another.

She reveals he was sent a ‘super inappropriate’ message that hinted at ‘unreleased footage’ from her sex tape with Ray J, along with photo of her crying face.

‘The last thing I want as a mother is for my past to be brought up 20 years later,’ Kim says. ‘It’s real embarrassing s**t. I need to deal with it, and will deal with it.’

Later footage then shows Kim calling her ex Kanye in tears, telling him: ‘I almost died when Saint thought it was funny,’ noting her son was too young to understand the context of the ad.

Kim adds she would have ‘died inside’ if her son was ‘a little bit older and old enough to read.’

ROBERT HARDMAN: The Queen is still very much in charge

Grammys 2022: BTS’ J-Hope takes a tumble as he performs Butter with his bandmates