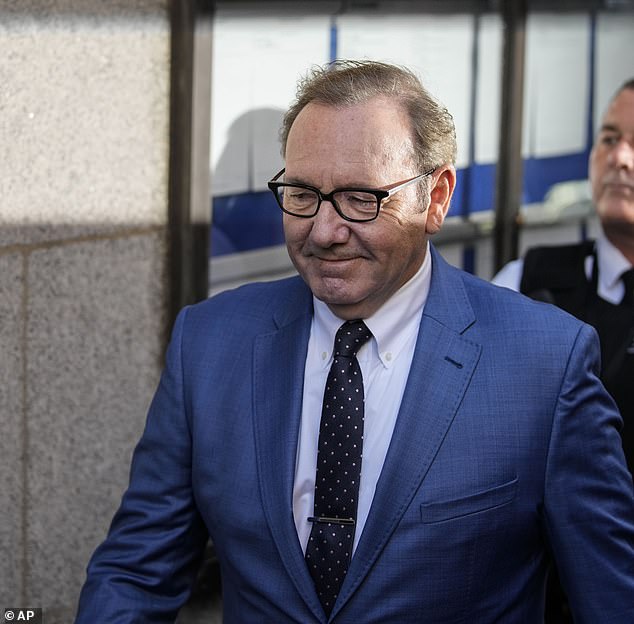 Kevin Spacey has today been accused of seven more sex offences in the UK – on top of five he already faces while he was artistic director of London’s Old Vic theatre.

The Hollywood star and Oscar winner, 63, who starred in Netflix series House of Cards and films American Beauty and The Usual Suspects, will be charged by the Crown Prosecution Service with a number of sexual assaults against one man between 2001 and 2004.

The charges include three counts of indecent assault, three counts of sexual assault and one count of causing a person to engage in sexual activity without consent – all on the same alleged victim.

Rosemary Ainslie, head of the CPS Special Crime Division, said: ‘The CPS has authorised additional criminal charges against Kevin Spacey, 63, for a number of sexual assaults against one man between 2001 and 2004.

‘The CPS has also authorised one charge of causing a person to engage in sexual activity without consent. The authority to charge follows a review of the evidence gathered by the Metropolitan Police in its investigation’.

Spacey is already accused of a string of sex attacks on three men in London and Gloucestershire between 2005 and 2013 while he was artistic director of the Old Vic theatre.

In July he was in the Old Bailey to face four charges of sexual assault and one count of causing a person to engage in penetrative sexual activity without consent.

Spacey denied the alleged offences. He is now expected to face a three to four week trial from June 6 next year.

The former Hollywood star had previously indicated he ‘strenuously denies’ the allegations of the three men, who are now in their 30s and 40s.

Oscar-winning actor Kevin Spacey (pictured outside court in July) appeared before the Old Bailey to enter formal pleas against historical sexual assault charges allegedly committed in the UK. Today he will be charged with seven more offences 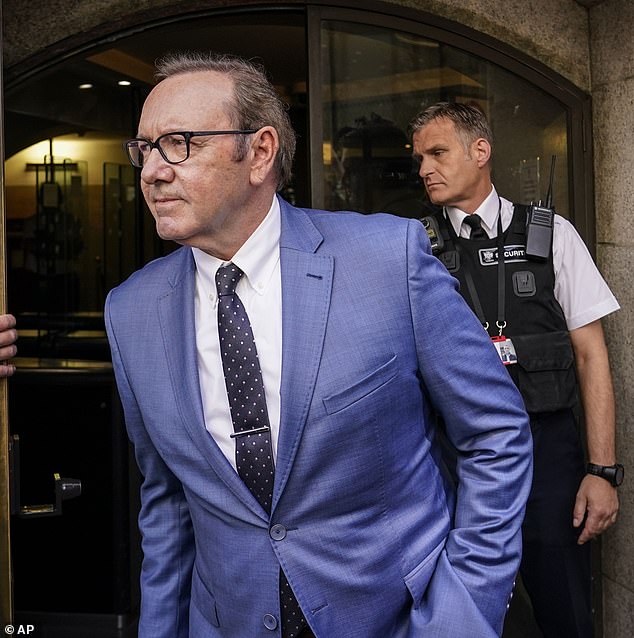 Spacey (pictured leaving the court) denied the alleged offences after appearing at the Old Bailey . He is now expected to face a three to four week trial from June 6 next year 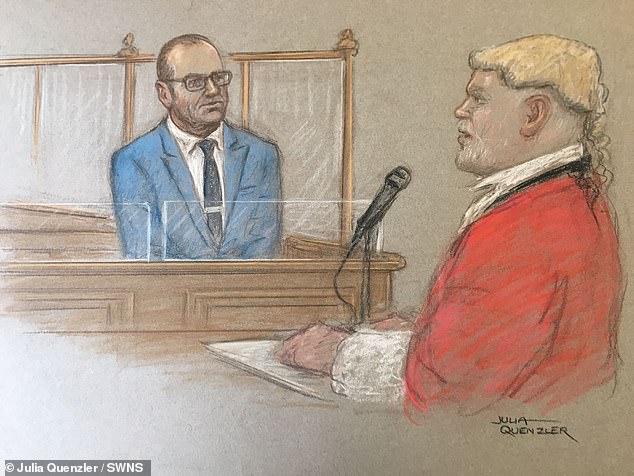 The bespectacled American Beauty actor appeared in the dock of court one wearing a light blue suit, white shirt and polka dot tie on July 14.

He gave his full name as Kevin Spacey Fowler and confirmed his date of birth of 26 July, 1959.

The two-time Oscar winner was mobbed by photographers and camera crews as he exited a dark Mercedes outside court.

Leaving court, Spacey made no comment as he was ushered into a chauffeur-driven car with darkened windows.

The Old Bailey heard the 63-year-old is said to have carried out four of the alleged assaults in London between 2005 and 2008.

The final allegation is said to have happened in 2013 in Gloucestershire.

At the time of the allegations, Spacey was artistic director of the Old Vic theatre in London, a position he held between 2004 and 2015.

Theatre bosses apologised after revealing it had received 20 complaints of ‘inappropriate behaviour’ against their artistic director, who was accused of having a ‘cult of personality’ which contributed to failings on behalf of the organisation.

Meanwhile, Spacey was stripped of an Emmy Award, while his character Frank Underwood in the critically-acclaimed Netflix show House of Cards was axed once the claims came to light. 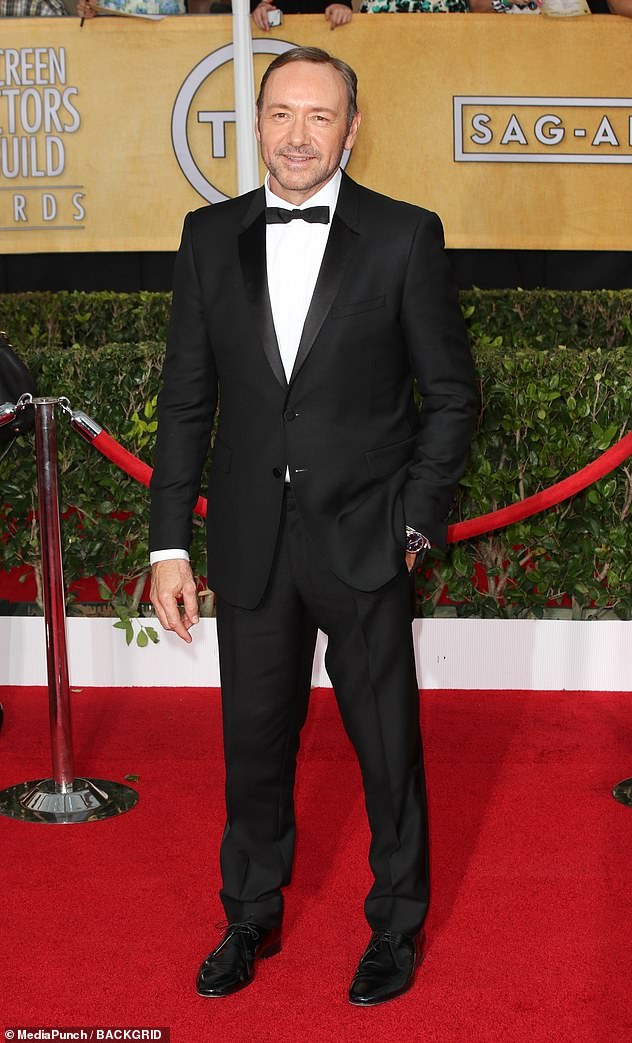 Spacey pictured on a red carpet in LA. The actor is facing charges of sexual assault in London. He denies the allegations and has vowed to defend himself 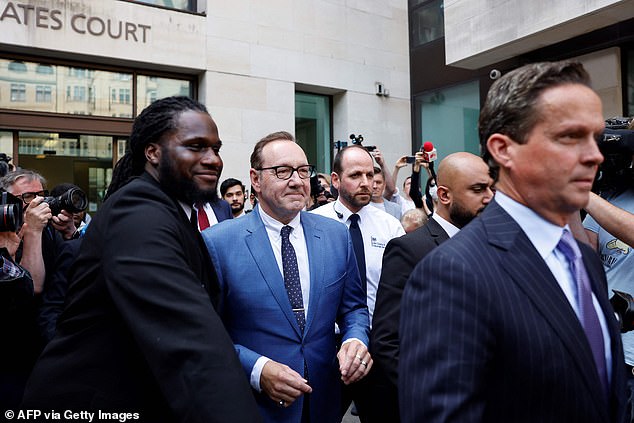 Westminster Magistrates’ Court heard in June Spacey went through four days of interviewing in New York and promised that if he was charged he would come to Britain to answer them.

Patrick Gibbs QC, defending, told the court Spacey ‘strenuously denies’ the allegations and had returned ‘voluntarily’ to the UK, where he has an address in Waterloo, south London.

Mr Gibbs said Spacey had returned to the UK ‘to establish his innocence’ and ‘proceed with his life’.

The Crown Prosecution Service authorised the charges against him in May, but Spacey could only be formally charged once he had travelled to the UK last month.

Spacey, a two-time Oscar winner, previously said he would travel to the UK to face the charges, which he is expected to deny.

In a statement released to Good Morning America after the CPS announcement, he said: ‘While I am disappointed with their decision to move forward, I will voluntarily appear in the UK as soon as can be arranged and defend myself against these charges, which I am confident will prove my innocence.’

Mum’s horror warning as her young toddler escapes the front yard and walks toward...

Jennifer Lawrence and husband Cooke Maroney check out a nearly $20 million mansion in...