Kellyanne Conway believes many people voted for Donald Trump in 2016 because they liked her – even though they much care for him.

This is Conway’s takeaway set down in her new memoir, Here’s the Deal.

She writes that on election night people were giving her the credit.  Trump was barely off the stage when the high fives and congratulations began raining down on me.

‘People were rushing over—people I knew, people I didn’t—shaking my hand and hugging me. Without me, they kept saying—and still do say—that Trump would not have been elected president,’ she writes.

Conway claims her male counterparts were ‘jealous little boys’ who tried to take credit for the win.

She said Jared Kushner in particular resented the credit she deservedly got: Jared didn’t have the guts to bring it up to me himself, but Ivanka told me her husband resented all the credit I got for the 2016 election win, while he “had been written out of it.”

Kushner lost Donald Trump the White House in 2020 and presided over a ‘wonky mishmash’ of a campaign that cost him nearly $2billion and the presidency.

In the book, seen early by DailyMail.com, Conway, 55, not only eviscerates the former presidential son-in-law, she accuses him of trying to ‘rewrite history’ by claiming credit for Trump’s 2016 win which, she says, was all her.

‘I was the one,’ the pollster-turned-presidential counselor writes, ‘to develop a “secret sauce,” to beat a woman for president and help lead Donald Trump in the Oval office,’ she writes referencing Trump’s 2016 victory over Hillary Clinton.

Should there be any doubt about just who won Trump his seat, Conway takes care to quote the gratitude of others, such as Trump’s Vice President Mike Pence who, in the chaotic aftermath of Trump’s sensational victory, she recalls, sat down next to Conway and said: ‘Kellyanne…none of us would be here without you.’

Kellyanne Conway holds no punches regarding her apparent disdain for former fellow Trump staffer Jared Kushner, in her new memoir, Here’s the Deal 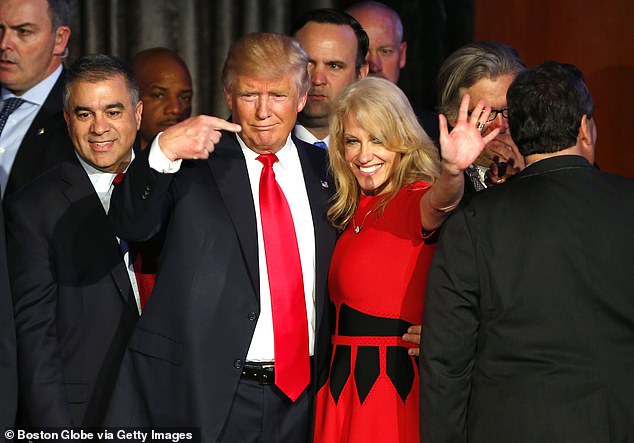 Conway, who served as the senior counselor to the president from 2017 to 2020, also takes most of the credit for Trump’s victory in 2016 and blames Kushner for his 2020 defeat. The two are pictured together on election night in November 2016

In fact, according to Conway: ‘Jared didn’t have the guts to bring it up to me himself, but Ivanka told me her husband resented all the credit I got for the 2016 election win, while he “had been written out of it”.’

Truth be told, if there’s anything Ivanka’s husband might wish he were written out of, it is Conway’s book.

The former Trump campaign manager-turned-senior counselor makes it clear from the get-go that her book, part personal memoir part political chronicle, will not be ‘another insufferable ‘tell-all’ from an author spinning through a cycle of incredulity who has decided to place profit over principle, fame over friendship, attitude over gratitude.’ 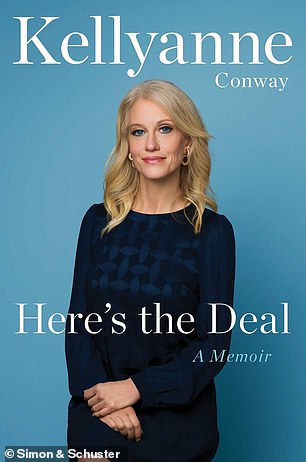 Here’s the Deal, published by Simon and Schuster, will be released on Tuesday, May 24

Safe to say there was no friendship to lose nor gratitude owed to Kushner, 41.

Because while she eulogizes Trump, 75 – who gave the book his blessing – as a ‘generous’ promoter of women, she pulls no punches in her assessment of his son-in-law.

When Conway writes: ‘Normally, one amasses experience before one amasses power. It was attractive and persuasive to the electorate that President Trump had no Washington experience, but less charming that top members of his ‘brain trust’ had none,’ she has Kushner squarely in her sights.

Conway shows similarly little regard for Steve Bannon – concluding that ‘No one stomped around the White House’ like he did, ‘And no one did less work.’

But while Bannon’s luster wore off – the onetime chief strategist survived just seven months of Trump’s administration – Kushner remained untouchable and, clearly more irritating to Conway, ‘unaccountable’, by virtue of his being ‘family.’

Jared was ‘shrewd and calculating,’ according to Conway. ‘There was no subject he considered beyond his expertise. Criminal justice reform. Middle East peace. The southern and northern borders. Veterans and opioids. Big Tech and small business.

‘If Martian attacks had come across the radar, he would have happily added them to his ever-bulging portfolio. He’d have made sure you knew he’d exiled the Martians to Uranus and insisted he did not care who got credit for it.’

According to Conway, Trump’s son-in-law ‘carried himself secure in the knowledge that no matter how disastrous a personnel change or legislative attempt may be, he was highly unlikely to be held accountable for it.’

She calls him ‘the Duke of 1600 Pennsylvania Avenue,’ and paints him as an almost reptilian presence with ‘whispering voice,’ and ‘unblinking’ eyes, ‘lingering at a safe distance yet constantly nudging everyone.’

The economy of Kushner’s words did not, she writes, ‘match the enormity of his power.’ 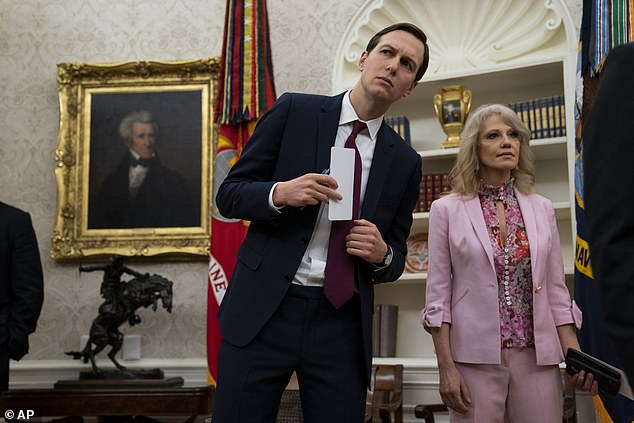 According to Conway, Kushner ‘carried himself secure in the knowledge’ that he was ‘highly unlikely to be held accountable’ for the administration’s blunders 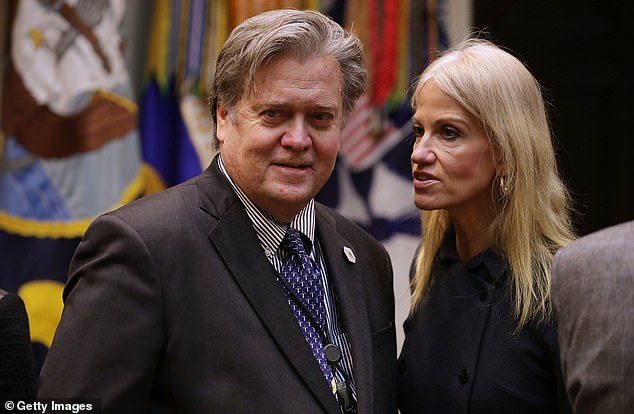 Conway, who initially worked alongside White House Chief Strategist Steve Bannon in the early days of Trump’s presidency, similarly shows little regard for him

Kushner, Conway writes, ‘was part dreamer, part schemer, dipping in and out of discussions adding himself at will to national security briefings and domestic and international trips, and undertaking secret, impromptu lobbying of his father-in-law in the private residences.’

Ill-fated Chief of Staff and four-star general John Kelly tried to limit that power and Kushner’s habit of ‘breezing in and out of any meeting he fancied, never taking a single written note.’

Kelly erected a ‘full floor-to-ceiling wall with four TVs on it, physically separating the chief of staff suite from Jared Kushner’s office, which under John Kelly would be more isolated.’

Conway recalls that she doubled up in laugher when she saw it, declaring: ‘You actually built a wall along the West Wing border.’

It did not, however, take long for Kushner to ‘figure out how to make two quick right turns into the president’s private dining room rather than go through the Outer Oval, where Kelly’s staff was now keeping closer tabs on the phone calls and foot traffic.’

‘If Jared or Ivanka wanted to see or know or be involved in something, no one was going to say no,’ she writes.

According to Conway, the couple frequently entertained Democratic senators in their home in DC’s tony Kalorama neighborhood. 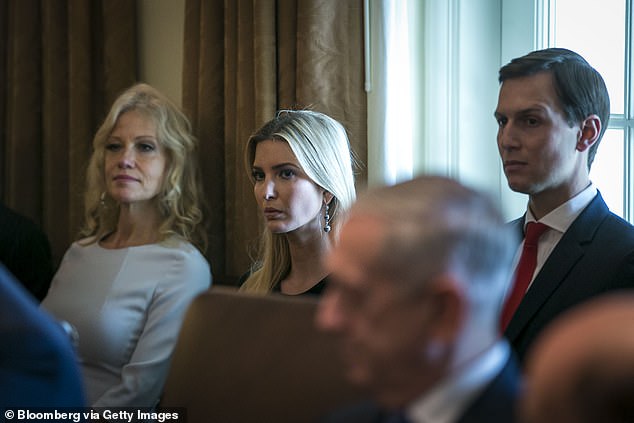 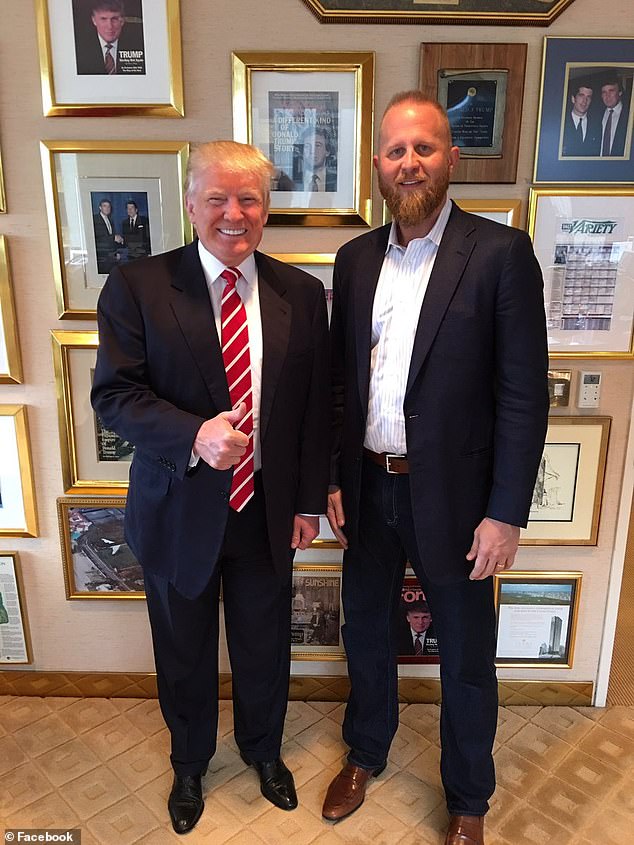 Plenty of those Democrats at dinner with the Kushners went on to impeach Trump, Conway notes, with a barbed aside: ‘How much goodwill and how many good deeds did all that wine really buy?’

Similarly, ‘with no clear ask or any direct nexus to the president’s priorities’ a lot of Kushner’s efforts, ‘came to feel like wheel spinning…often, it was noted, nothing much happened at all.’

In fact, Conway seems to delight in recounting Kushner’s ‘destined-to-fail plans’ such as one immigration initiative that Trump’s son-in-law wanted the president to announce from Ellis Island and the base of the Statue of Liberty.

‘It quickly became apparent that an event like that would soak up a ton of government resources and almost certainly provoke angry protests,’ she writes. The plan was quietly shelved.

When it comes to Trump’s ultimate defeat and the loss of the 2020 election Conway is blunt in her attribution of blame which she divides between Kushner and official campaign manager Brad Parscale.

Trump’s defeat and his failure to accept that defeat was, in large part, Conway writes, down to Kushner who walked into campaign headquarters and told Conway and Hope Hicks: ‘You guys take care of the messaging. I have to deal with the mayor. They are cooking something up.’

The mayor to whom he was referring was Rudy Giuliani.

Instead of delivering an honest assessment of the president’s loss, Conway opines, ‘supplicant after sycophant after showman genuflected in front of the Resolute Desk and promised the president goods they could not deliver.’

Donald Trump nearly ended his presidential bid when the now infamous ‘Grab ’em by the p****’ hot-mic video surfaced in 2016.

Trump was unwittingly recorded telling TV presenter, Billy Bush, that being famous meant women ‘let you do it. You can do anything. Grab ’em by the p****.’

When the 2005 video surfaced the former president was publicly bullish dismissing it as ‘locker room talk.’

Now, Kellyanne Conway reveals in her upcoming memoir ‘Here’s the Deal,’ that Trump, 75, was rocked by the affair and seriously considered withdrawing from the political race. 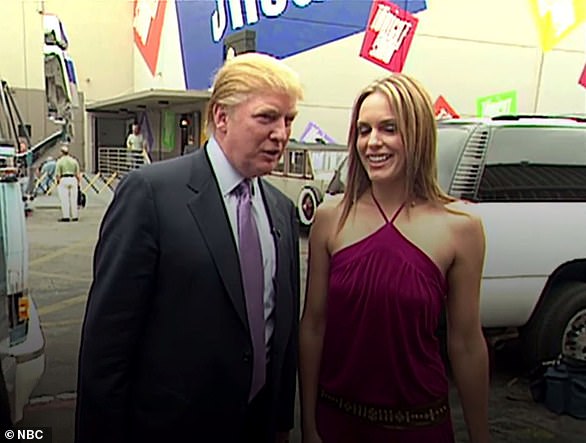 The Washington Post leaked audio in October 2016 caught on a hot mic between Trump and Billy Bush while waiting for actress Ariana Zucker (pictured with Trump in 2005). Trump had said of Zucker: ‘I better use some Tic Tacs just in case I start kissing her. You know I’m automatically attracted to beautiful—I just start kissing them. It’s like a magnet. Just kiss. I don’t even wait. And when you’re a star, they let you do it’

According to Conway two things stopped him from taking that course: her advice and the realization that throwing in the towel that late in the day would mean forfeiting the White House to Hillary Clinton.

According to Conway, Trump’s then Chief of Staff Reince Priebus told him he had two choices: Drop out and let someone else run or stay on the ticket and lose by the widest margin in presidential history.

Conway, 55, admits, ‘Although Trump listened to me and respected me and the other women on the campaign and White House staff, he didn’t fear us. Fear was reserved for one individual: Melania.’

She claims, ‘For him, facing her was the hardest part of the whole ordeal.’

In fact, Melania, 52, was clear that she needed to issue a stern statement condemning her husband’s crass comments.

She read a draft prepared by Conway and told her, ‘Make it tougher.’

In the end her statement read, ‘The words my husband used are unacceptable and offensive to me. This does not represent the man I know. He has the heart and mind of a leader. I hope people will accept his apology, as I have, and focus on the important issues facing our nation and the world.’

But in private the future president still wobbled. After a crisis meeting at which these details were hashed out Trump took her aside, she writes, and asked, ‘Should I get out [of the race]?’

She states, ‘He needed to have this conversation with a woman other than his wife or his daughter. I didn’t know if he was testing me or testing himself. My answer was more clinical than emotional. ‘You actually can’t’ I said, ‘unless you want to forfeit and throw the whole damn thing to Hillary.’

Jumping forward, Conway, who resigned in August 2020, recounts a dinner she had with Trump and Melania in Mar-a-Lago in spring 2021.

Apropos of nothing, she writes: ‘President Trump suddenly switched topics, “You weren’t much of a Jared person, were you?”

According to Conway she replied: ‘I just don’t understand why you gave him so much power and why he meddled in every single thing.’

Trump replied: ‘I didn’t give him any power. He just happens to have a very good relationship with my daughter.’

‘Maybe you have it backward, Donald,’ Melania suggested, ‘Maybe Jared was not much of a Kellyanne person.’

According to Conway, her primary beef is with Kushner’s attempt to ‘pick and choose his legacy.’

Safe to say he would not choose the one offered up by Conway in her version of his story and hers.

Here’s the Deal, published by Simon and Schuster, will be released on Tuesday, May 24, 2022