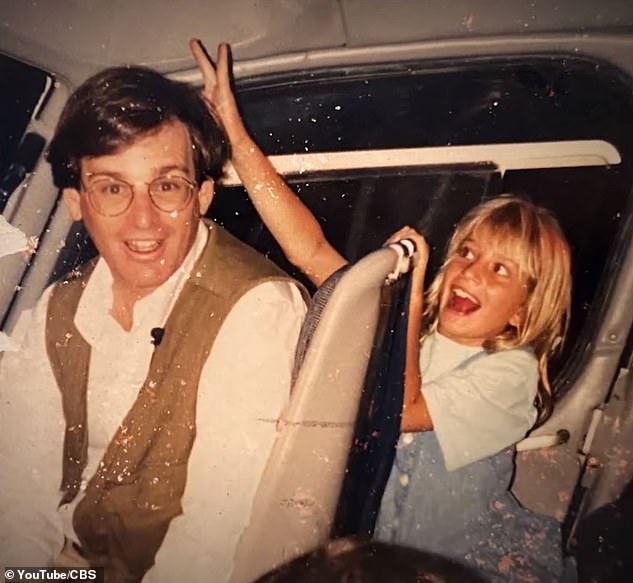 MSNBC anchor Katy Tur has revealed the moment she finally stood up to her legendary broadcaster father – who later came out as transgender in 2013 – and punched him back as a teenager after years of abuse.

In her new memoir, Rough Draft, Katy offers a close look into her parent’s turbulent marriage and dives into how the former power couple of broadcasters, Marika Gerrard and Zoey Tur – formerly Bob Tur – came undone.

In a heart-wrenching excerpt published in New York Magazine, Katy, 38, recounts the moment she decided she had had enough from her chopper journalist father, who had allegedly beaten her and Gerrard regularly.

‘F*** off,’ Katy, then a high-school senior, recalls telling her father. ‘Get out. We don’t want you here. LEAVE!’

The MSNBC anchor said he then proceeded to take ‘two or three hard strides’ in her direction and hit her, breaking her lip.

‘How dare you,’ she remembers screaming at him. ‘I’m your daughter.’

She then recalls punching him back in the chest, her knuckles cracking on impact. He left shortly after.

Tur writes that she and her mother entertained the idea of calling the police, but ultimately decided against it because it would ruin Bob’s career and image.

The pair were well-known Los Angeles-area television journalists who together as a team helped to popularized helicopter coverage – Bob behind the controls and Marika behind the camera.

‘My mom shot all the footage but my dad was the brand,’ Tur writes.

Tur offers a deeply layered characterization of her father, who is perhaps best known for covering the 92′ LA riots and the infamous OJ Simpson low-speed chase from the sky. He was also abused by his own father as a child, she notes.

Bob Tur was both ‘the hero and the harm,’ at home. He threw ‘keys, plates, batteries, cell phones, two-way radios, and flight helmets,’ at his wife, only to bandage her injuries afterwards.

He punched holes in the wall that Gerrard would plaster after his fits of rage, Tur wrote. The holes that were too big to plaster, the family would hang pictures over.

In her new memoir, Rough Draft, Katy Tur, ecounts the moment she decided she had had enough from her chopper journalist father, who had allegedly beaten Gerrard 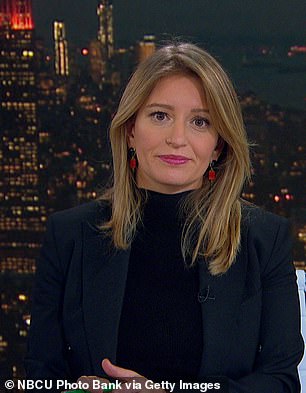 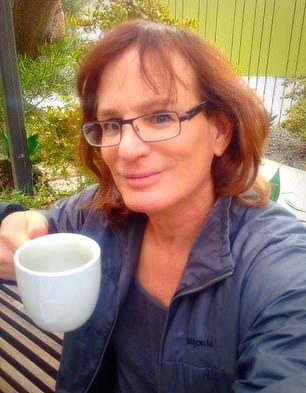 Katy offers a deeply layered characterization of her father, known for covering the 92′ LA riots and the infamous OJ Simpson low-speed chase from the sky, who was also abused by his own father as a child 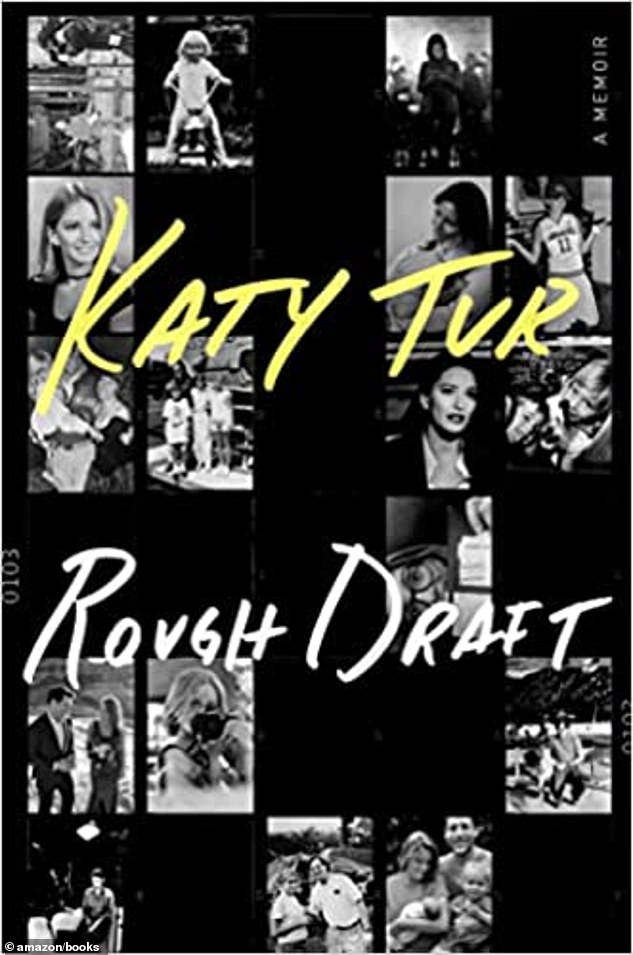 Tur also offers an insight into her father’s own history of domestic violence as a child at the hands of her gambling-happy grandfather, Jack Tur.

‘Everything he did after that was a continuation of that first attempt to find safety. When there’s no going home, no going back, nothing but the future, you find a way to make it, or you fall apart trying.’

In her memoir, Tur reminisces about her childhood flying over Los Angeles with her helicopter reporter parents. 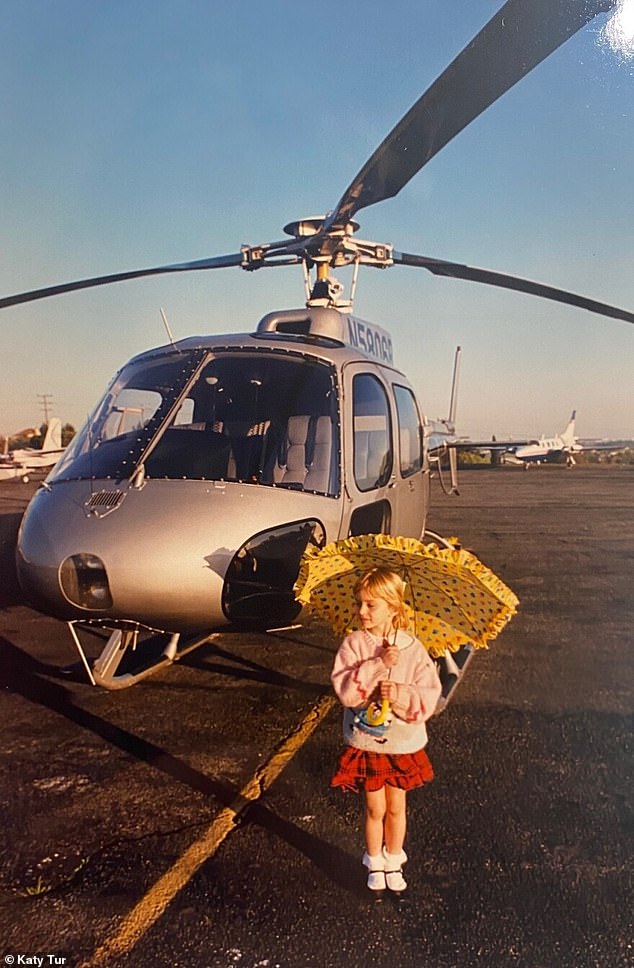 In her memoir, Katy reminisces about her childhood flying over Los Angeles with her helicopter reporter parents 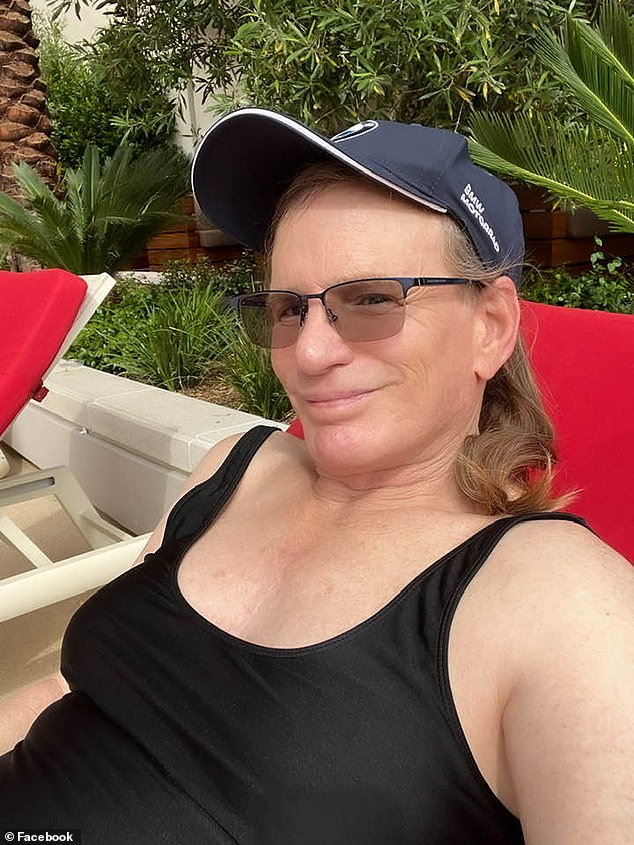 Zoey Tur came out as transgender in 2013

She then became uncomfortably aware that money was tight after her parents had to cut their health insurance, she wrote.

Katy wrote: ‘My parents tried to stay on top of their business. But those were Judy’s deals. My parents had her files but not her relationships.’

‘Their monthly revenue slid southward. From six figures to five figures to four figures, even less. Difficult decisions loomed. Move into a smaller house? Lose the fancy cars? The private school? The health insurance? The hangar and the helicopter? The math didn’t work on all of it. Something had to go.’ 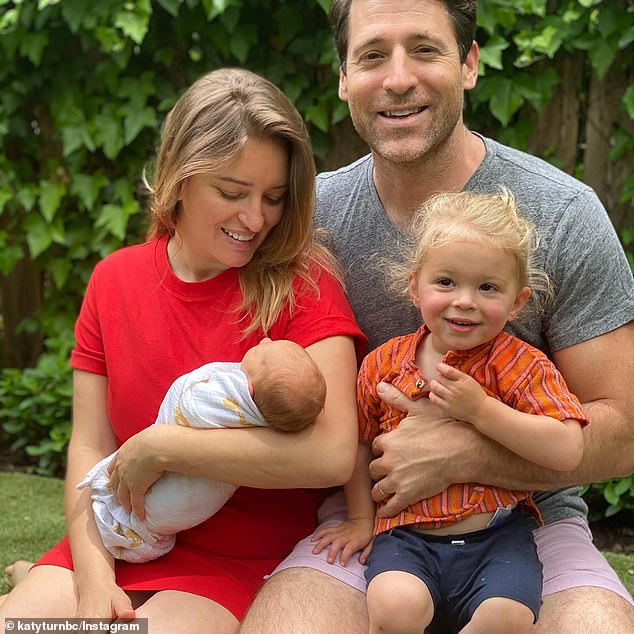 Over the weekend, Katy shared about her last call with her now-estranged father, who has never met her two children with ‘CBS This Morning’ co-host Tony Dokoupil 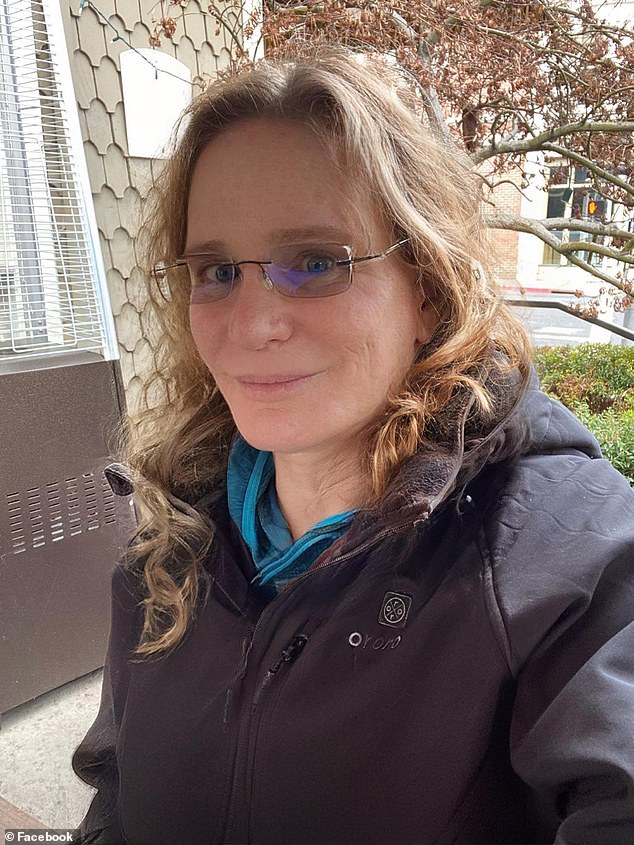 Katy has not seen her father, Zoey Tur, since 2013

Over the weekend, Katy shared her last call with her now-estranged father, who has never met her two children with ‘CBS This Morning’ co-host Tony Dokoupil.

‘And I remember being at first puzzled and saying, ”You gotta be joking. You’re kidding, what are you talking about?”’

Katy said her father confessed to her during the call that her volatility and violence during the turbulent marriage with Gerrard stemmed from Zoey not being able to be her true self.

Zoey has acknowledged that working in the demanding journalism industry had affected her behavior at home.

‘She [Katy] really looked up to me, and I failed her. No father wants to fail their daughter … Throwing batteries? Probably, yeah. Punching walls? There were a couple,’ she told CBS. 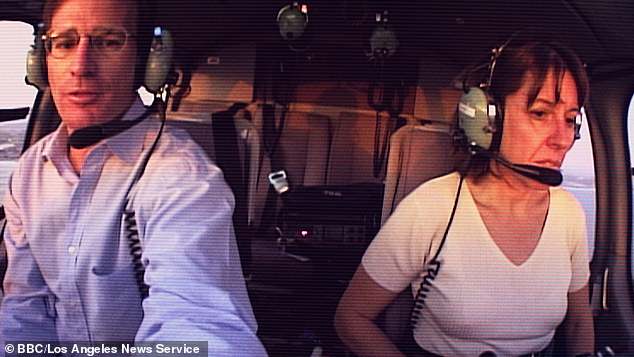 Speaking to CBS ahead of her new memoir Rough Draft, Katy reminisced about her childhood canvassing the sky of Los Angeles with her helicopter reporter parents, the former power couple of broadcasters Marika Gerrard and Zoey Tur – formerly Bob Tur 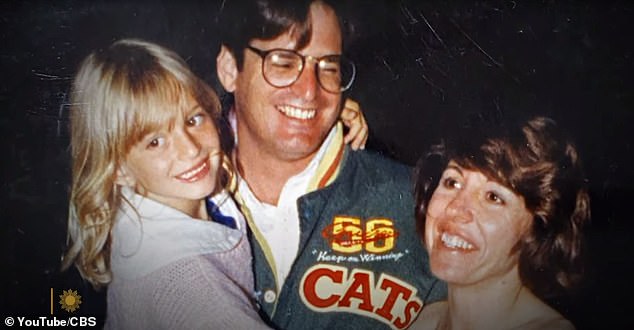 The MSNBC anchor also accused her father of throwing batteries at her, her brother and mother, and punching walls when she was growing up.

Katy, who went on to become an award-winning journalist of her own right, told CBS  she was puzzled when she received a call from her father in 2013, the last time she spoke with her.

‘And my dad was adamant. ”I’m the wrong person. I’m going to become the right person. Don’t you see? This is why I’ve been so angry” And it was really just, it was a lot,’ Katy said.

Zoey had previously said that Katy has not spoken to her since she made the decision to transition.

Zoey has also said in the past that she does not consider Katy as ‘transphobic.’

‘It’s that her hero father has become this. And it’s the fear of not fitting in. It’s the pressure of being on network television. It’s the conservatism that she’s forced to endure,’ she told  The Hollywood Reporter in 2016.

‘… You have to appreciate that her image of me has been torn apart,’ said Tur.

Speaking to CBS, Zoey admitted that he had let her daughter down and blamed her past fits of rage on the stress she experienced in the business.

‘I was in the news business and we were under extraordinary pressure. I could be very intimidating for sure. And if the kids felt I was intimidating, I apologize. I did the best I could,’ she said. 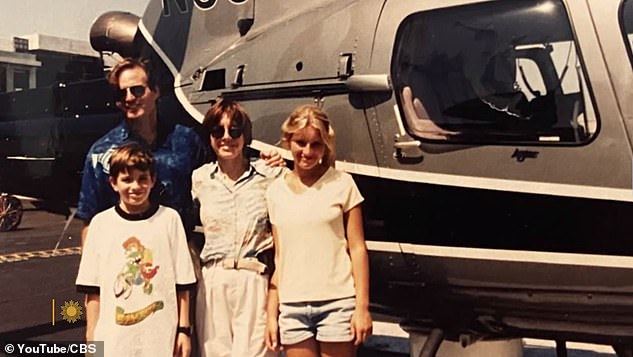 Zoey, who is famously known for covering the 92′ LA riots and the infamous OJ Simpson low-speed chase from the sky, acknowledged that working in the demanding journalism industry had affected her behavior at home

Katy told CBS due to her work ethic, she felt compelled to share both the good and bad sides of her parent’s marriage in her new memoir.

‘And part of the story is the violence. If I only wrote the good stuff it would have been a lie. It’s a business where you’re not supposed to lie. You’re supposed to tell the truth and this is the truth,’ she told the outlet.

In her memoir Rough Draft, Katy opens up about everything from childhood to journalism to becoming a parent.

She is also the author of ‘Unbelievable: My Front Row Seat to the Craziest Campaign in History,’ a best-selling account of covering Donald Trump’s 2016 campaign for NBC.

‘Rough Draft is for me not a story of the last four years, but the last 40,’ Katy said in a statement last year.

‘I watched my parents revolutionize the breaking news business, then break apart themselves, a fact I ran from until I had no choice: write this book or walk away. I chose to write.’ 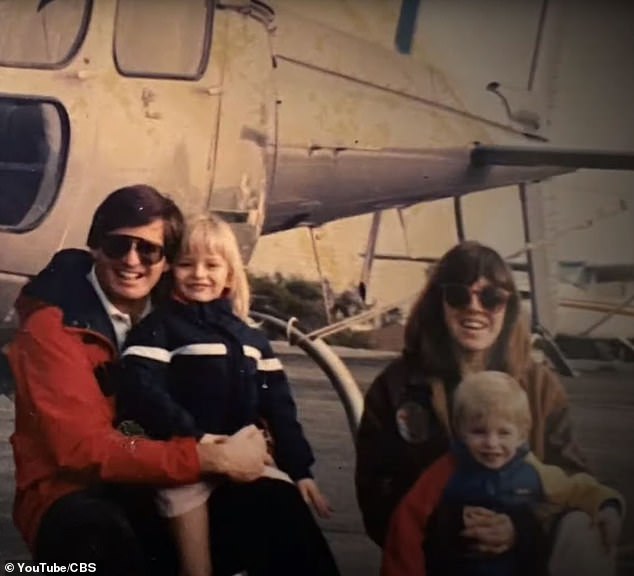 Katy told CBS due to her work ethic, she felt compelled to share both the good and bad sides of her parent’s marriage in her new memoir 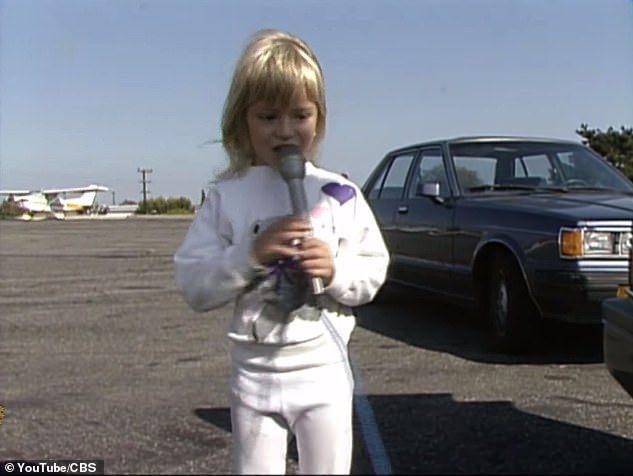 Zoey has previously said that her daughter’s reaction is ‘not unusual,’ and has claimed that she was a huge influence in Katy’s life and the reason she got into journalism. Above, a young Katy Tur 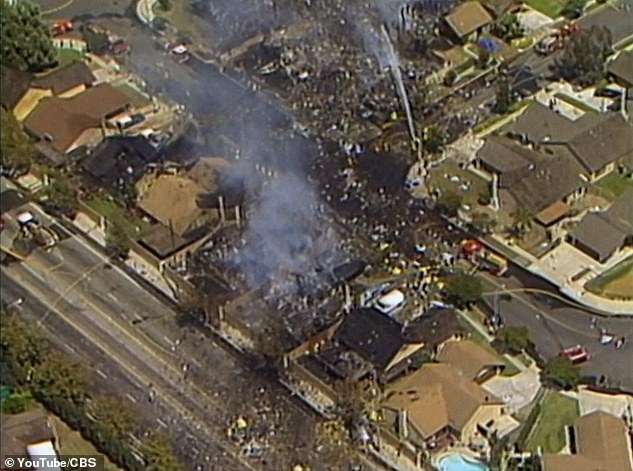 Zoey has said she made the decision to transition while sitting in a Florida hotel room and working on a George Zimmerman documentary, telling herself she either had to do something or her life would end in suicide.

She began watching videos on YouTube which inspired her so much she wrote personal letters to her son and daughter, sharing her news and explaining her future plans.

‘And I got down on the ground and my phone started lighting up. It was my son. And his reaction was, ‘Well, if it’s going make you happy, I’m happy.”

Katy though ‘did not like it for a moment at all’ said Zoey, adding: ‘They knew I was bisexual. That was acceptable. The transgender stuff, no. No, that crossed the line.’

Zoey has previously said that her daughter’s reaction is ‘not unusual,’ and has claimed that she was a huge influence in Katy’s life and the reason she got into journalism.

Katy joined the NBC team back in 2009 and steadily rose the ranks.

In 2009, she received the AP’s Best Spot News Award for her coverage of the 2008 crane collapse in Manhattan.

She covered the Trump presidential campaign for NBC in 2016 and was who informed him of the Access Hollywood Tape. She is now an anchor for MSNBC.

Jill Biden did not want Harris to be Joe’s VP after she attacked him...

Man, 50s, jumps to his death off Mickey and Friends Parking Structure at Disneyland