The Princess of Wales looked smart in an Alexander McQueen blazer as she met childhood development experts at Windsor Castle today.

Kate Middleton, 41, spoke to the eight professionals, appointed to offer her strategic advice and provide oversight of the work of her Royal Foundation Centre for Early Childhood, in Berkshire this morning.

The group will support the princess and the centre as her work to promote the fundamental importance of the first five years of a child’s life continues.

Kate, shaking hands with the specialists, said: ‘Thank you for coming on a cold sort of morning! It’s really great to have you on board, we’re so grateful for your work.’

The mother of three, who has made early years work a cornerstone of her royal duties, wore a black blazer from the British label, with a white Holland Cooper blouse.

The princess swept her hair into a bouncy blow dry for the outing and chose a subtle smokey eye and a sweep of blush.

Tucking her hair behind her ear, Kate revealed a pair of pearl drop earrings which added a touch of glamour to her outfit.

She has worn Alexander McQueen – one of her favourite fashion brands – on numerous occasions, most notably choosing its creative director Sarah Burton to design her wedding dress. A favourite of the royal, Kate has worn Alexander McQueen on numerous occasions, most notably choosing the design house’s creative director Sarah Burton to fashion her iconic wedding dress

Her blazer, crafted from structured crepe, creates a fitted and flattering silhouette thanks to its angular pockets and sharp padded shoulders.

She paired the blazer with a white bodysuit from designer label Holland Cooper, which she has previously also worn on a number of occasions.

Kate’s meeting reflects several years of work in early years, maternal and teenage mental health as she continues her crusade to improve the nation’s wellbeing.

She launched The Royal Foundation Centre for Early Childhood in 2021 to increase focus on the development in the first years of a child’s life, in order to have an impact on their later years. 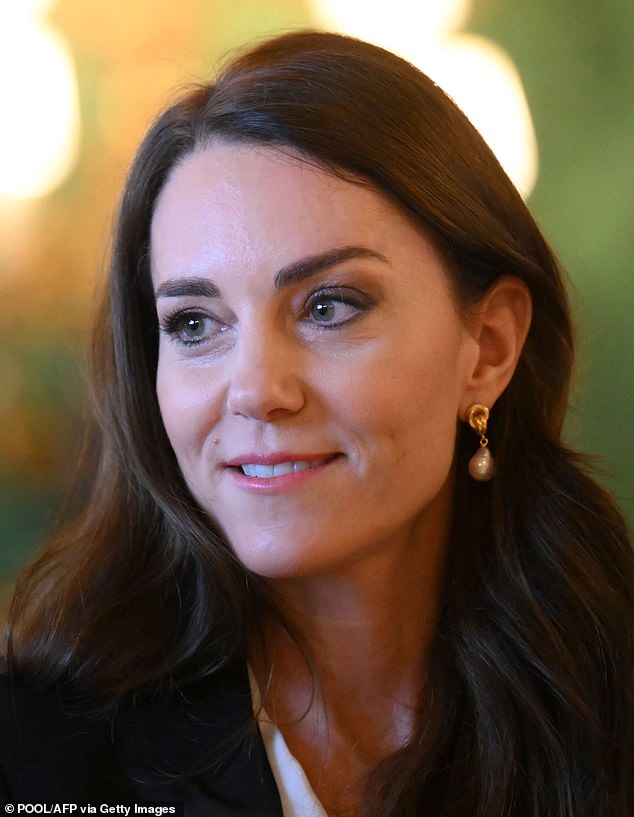 The Princess appeared in good spirits as she met with the experts today, opting for a sweep of eyeshadow and a touch of pink lip gloss 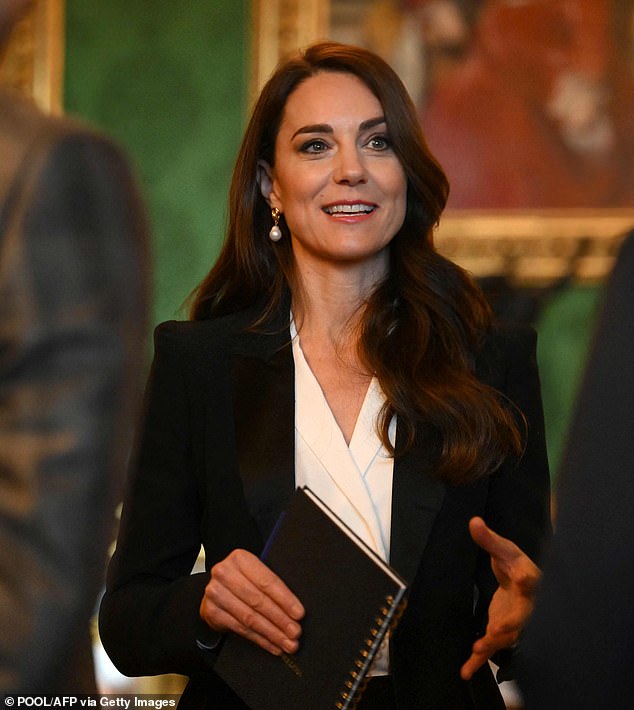 The mother-of-three donned a smart black blazer from the British label for the occasion, which she paired with a white blouse from Holland Cooper 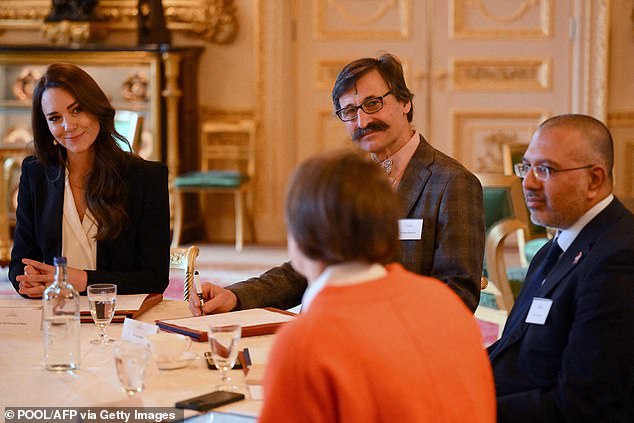 The Princess, who has met a number of the experts in the past, said she was ‘grateful’ for their advice and support 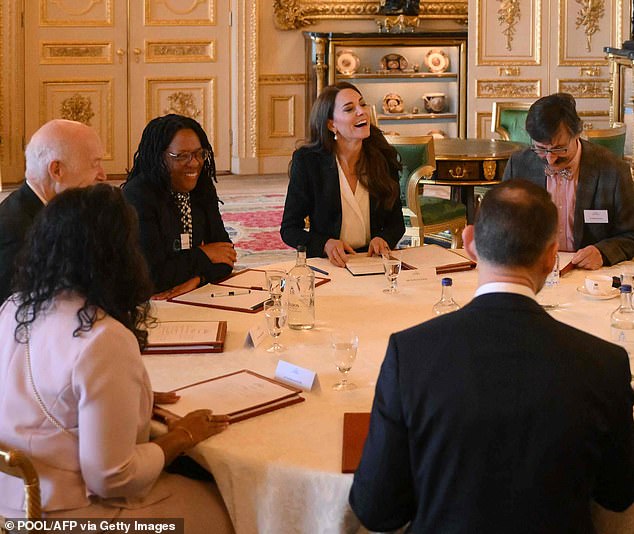 Kate’s meeting today reflects several years of work in early years, maternal and teenage mental health as she continues her crusade to improve the wellbeing of the nation 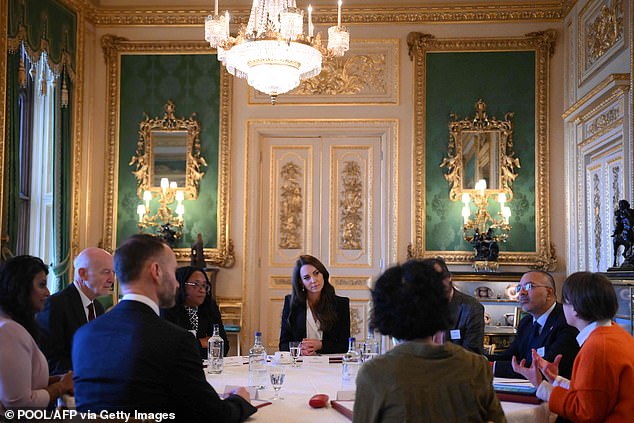 Kate launched The Royal Foundation Centre for Early Childhood in 2021, established to increase focus on the first years of a child’s life in impacting later life

According to its website, the centre focuses on three main areas: research into the significance of early years; collaboration with public, private and voluntary sectors to share knowledge; and campaigning to raise awareness of the issue.

The expert group includes Professor Peter Fonagy OBE, head of the division of psychology and language sciences at University College London, who previously said Kate had made early years her focus to make sure she’s the best mother she can possibly be.

In 2018, Professor Fonagy opened up to People magazine about the inspiration behind Kate’s favoured projects.

‘Part of her interest in prevention is to make sure that she does things right in her own parenting,’ he said.

He added that the Princess feels it’s ‘an incredible privilege to be a mum’. 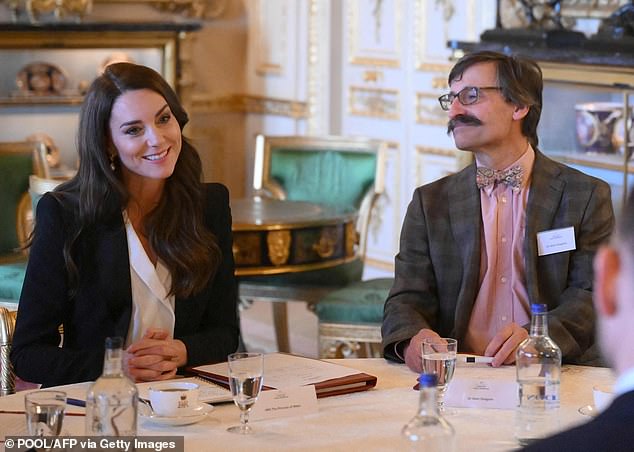 The Princess was beaming as she spoke with the eight experts, who will be offering advice to her foundation, during the meeting today

‘She’s genuinely interested in how to make children’s lives better, and what parents and professionals can do to positively influence the lives of children,’ he said.

The experts who will be advising the Princess!

• Professor Peter Fonagy OBE, Head of the Division of Psychology and Language Sciences at UCL and Chief Executive of the Anna Freud National Centre for Children and Families

• Dr Trudi Seneviratne, Registrar at the Royal College of Psychiatrists

• Imran Hussain, Director of Policy and Campaigns for Action for Children

She has also met with a number of the experts on previous occasions, including Dr Alain Gregoire and Eamon McCrory.

The group will support the delivery of the Centre’s work in commissioning new research, learning from best practice in the UK and globally, and raising awareness of the extraordinary impact the first five years of life have on future outcomes.

Advisory Group members have been chosen for their deep expertise in a range of areas including neuroscience, psychology, perinatal psychiatry, early years services and policy development.

Amanda Berry, Chief Executive of The Royal Foundation said: ‘Working with such an eminent group of people is an absolute privilege.

‘I know their advice and experience is hugely valued by The Princess, and the whole Centre for Early Childhood team, as we continue to drive awareness of, and action on, the transformative impact of the early years.

‘The Advisory Group’s support in our key areas of research, collaboration and awareness raising will be invaluable and I look forward to working closely with them to make a difference for generations to come.’

Several of those involved have already played a pivotal role in the work The Princess of Wales has been pursuing for more than a decade in this field, helping her to shape her work on the issue and adding to her determination to help change the way people think about early childhood.

The appointment of the Advisory Group comes as the Royal Foundation Centre for Early Childhood appoints Christian Guy as the Centre Director.

Kate’s appearance today comes after a royal expert said the Princess is ‘rising above the drama’ following her brother-in-law’s explosive memoir. 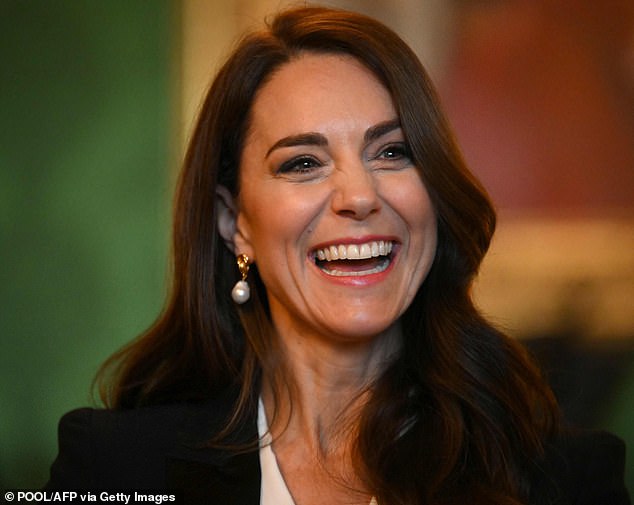 The Princess swept her hair into a bouncy blow dry for the occasion, tucking it behind one ear to reveal a pair of pearl drop earrings The mother-of-three, who has made Early Years work a cornerstone of her royal work, donned a smart black blazer from the British label for the occasion, which she paired with a white blouse from Holland Cooper Kate met with a group of eight professionals, who have been appointed to offer her strategic advice and provide oversight of the work of her Royal Foundation Centre for Early Childhood

She was praised for ‘putting duty before herself’ by Vanity Fair’s Katie Nicholl.

‘She’s doing a job that not only puts a smile on her face, but brings smiles to the faces of others,’ author Katie told OK! Magazine.

‘She doesn’t do drama and she never has.’

The writer behind The New Royals: Queen Elizabeth’s Legacy And The Future Of The Crown told the outlet the King Charles III will be channeling the same ‘back to business’ attitude his family is known for.

‘She’s leading by example and putting duty before herself,’ Katie added.

Vicky White dumped her Ford SUV in Tennessee a week ago hours after jail...