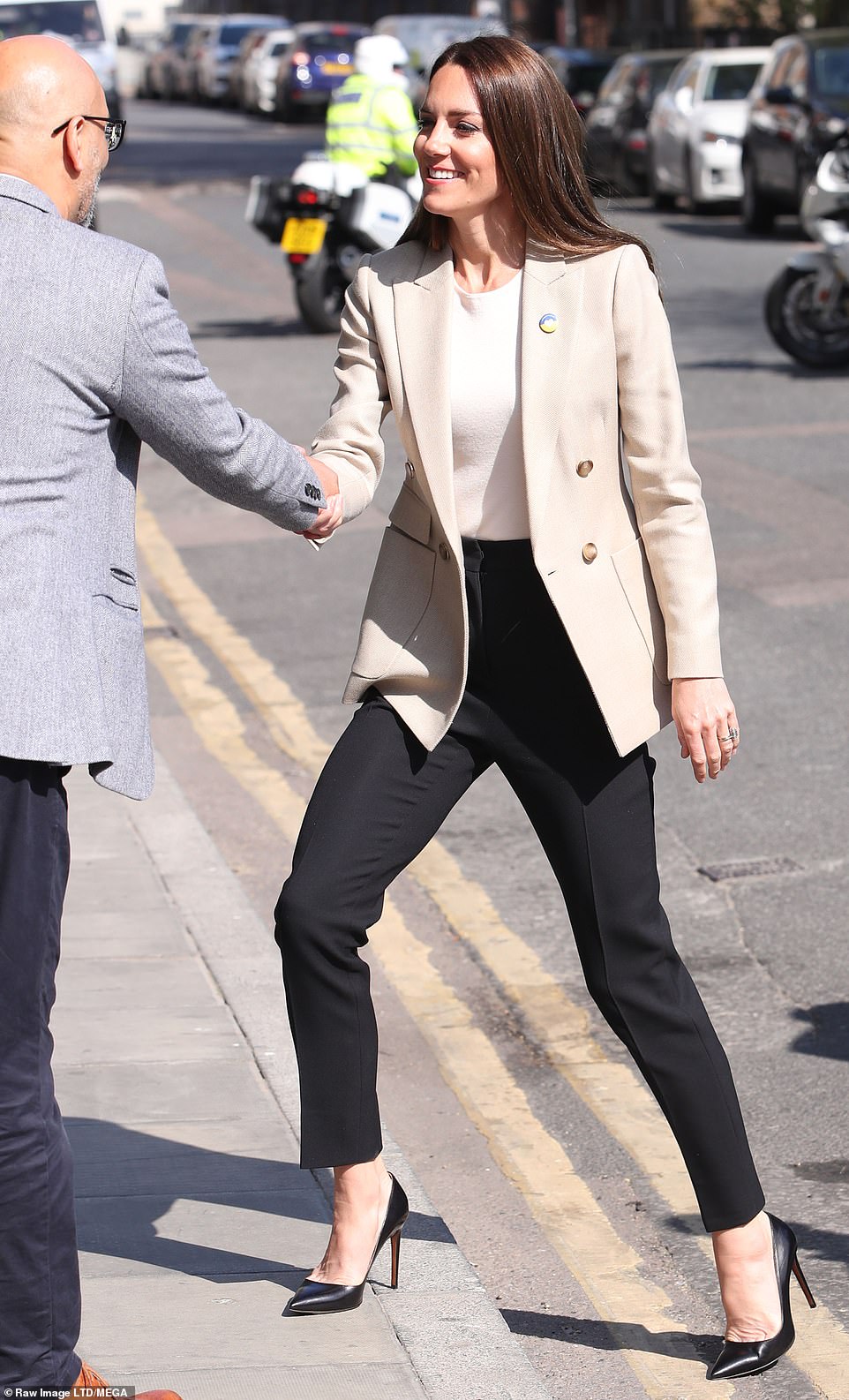 The Duchess of Cambridge recycled a £285 beige Reiss blazer as she joined Prince William to meet with aid workers who have returned from the Ukraine at the Disasters Emergency Committee in London this morning.

Kate Middleton, 40, smiled as she arrived at the engagement in London alongside her husband the Duke, 39, earlier today, where they met the DEC’s Chief Executive Saleh Saeed as well as aid workers who have recently returned from Ukraine and neighbouring countries where 5 million refugees have fled.

The mother-of-three recycled her neutral-coloured £285 Reiss double breasted blazer, which features tailored simplicity with a soft finish, wide peak lapels and button fastenings, and paired the piece with navy trousers and a white t-shirt.

It was business as usual for the royal couple today, who are not expected to join the Queen for her 96th birthday celebration.

Instead, the Duke and Duchess spoke to staff on the ground in Ukraine via video link to get a clearer picture of the current situation and hear about how aid is helping people in need.

They also heard how the crisis in Ukraine is having far reaching consequences in other countries by driving up food prices.

Further showing their support, both William and Kate sported pins showcasing the blue and yellow of the Ukrainian flag underneath a white love heart, while the Duke donned a navy suit for the outing.

It comes amid fresh frustration from the Royal Family after Prince Harry took potshots at the Firm in US TV interviews. 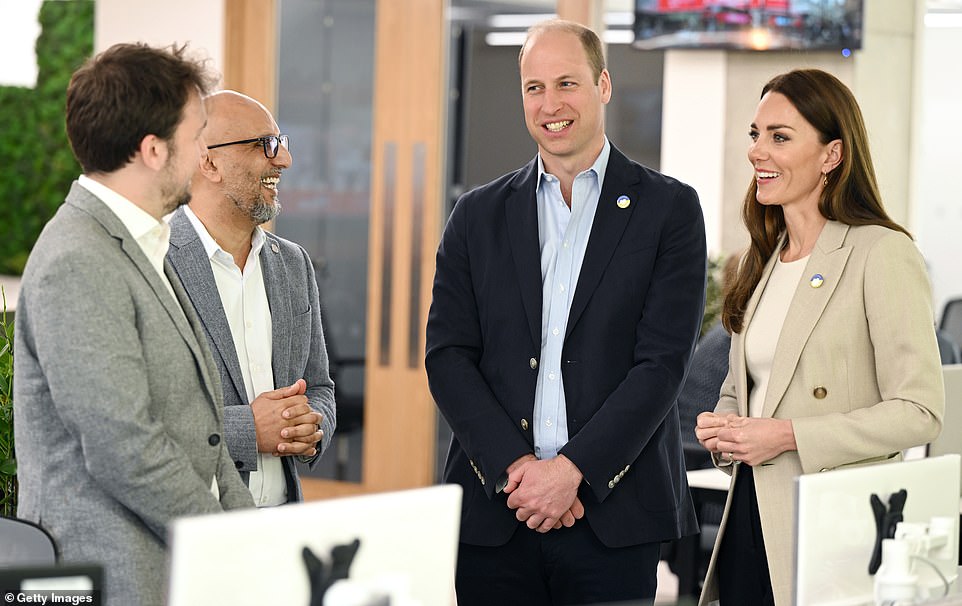 The mother-of-three opted to wear her neutral-coloured £285 Reiss double breasted blazer, which features tailored simplicity with a soft finish, wide peak lapels and button fastenings, and paired the piece with navy trousers and a white t-shirt

The Duke and Duchess of Cambridge are carrying on as usual during the visit today, and appeared relaxed as they arrived at the engagement.

The mother-of-three swept her glossy brunette hair back from her face, completing her look with a subtle pink lipstick and bronzer.

The royal, who is known for her love of rewearing pieces and high street brands, also opted to wear her favourite pair of £550 earrings for the appearance.

The Duchess was first snapped in the stunning yellow gold citrine pear drop earrings from Kiki McDonough in 2009, and they have become a favourite of hers over the past 12 years. 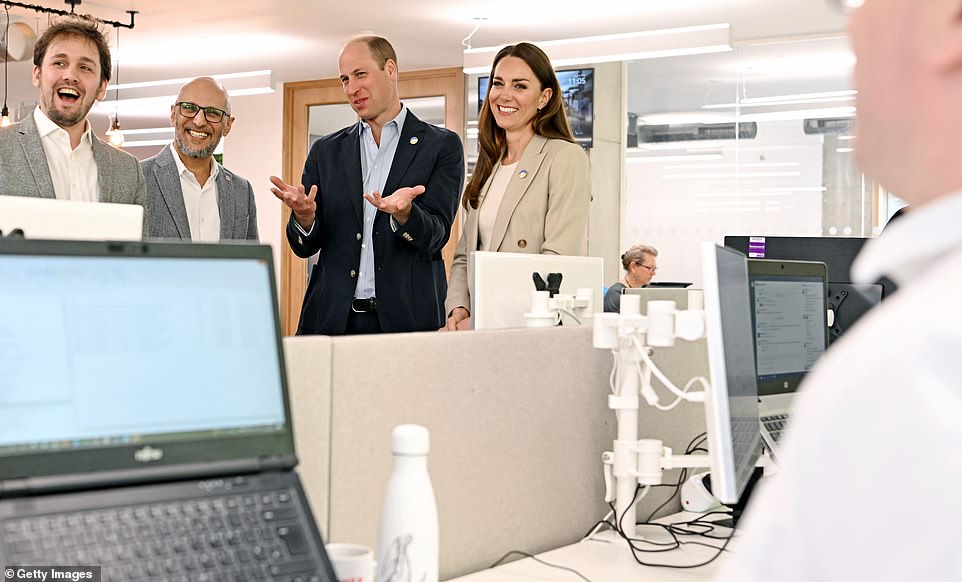 During their visit, the royal couple were given a tour of the London headquarters of the Disasters Emergency Committee 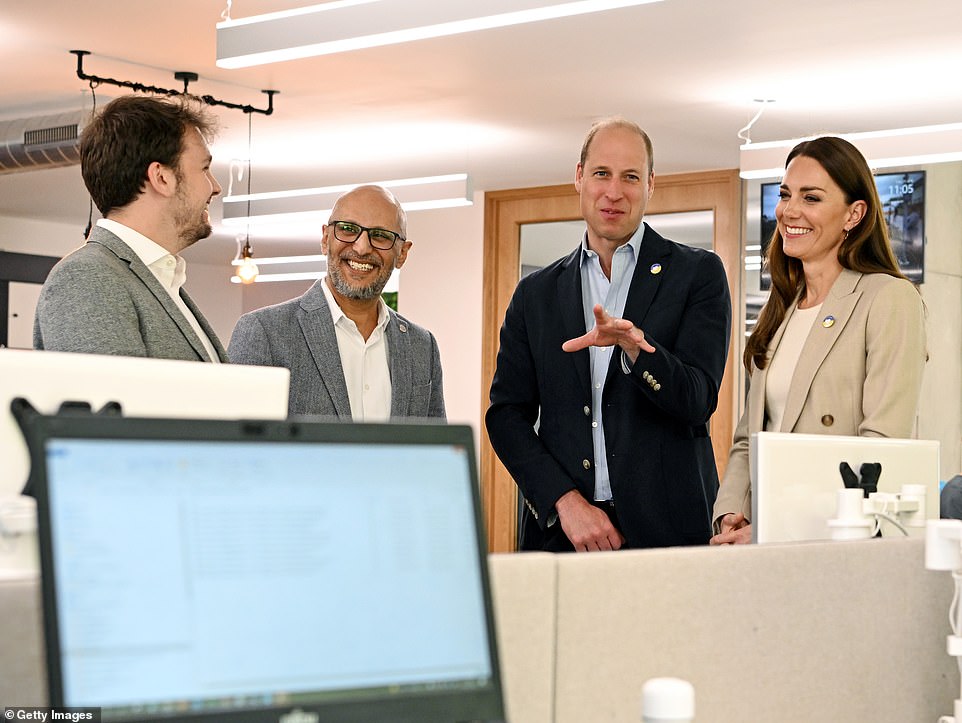 The visit comes as the Disasters Emergency Committee (DEC) announced that the Ukraine Humanitarian Appeal had raised over £300 million.

Speaking to the Duke and Duchess via video link from Kyiv, Rachael Cummings, Health Lead for Save the Children in Ukraine explained how the funds were transforming the way they had been able to respond to the crisis.

She explained: ‘What the DEC funds have meant is that we’ve been able to significantly scale up our existing work in the country.

‘We’re particularly concerned about the devastating effect on children and these funds mean that we can ensure that children receive high quality care and support now, and in the months ahead.’

Meanwhile the couple also spoke with aid workers at the organisation’s headquarters in London. 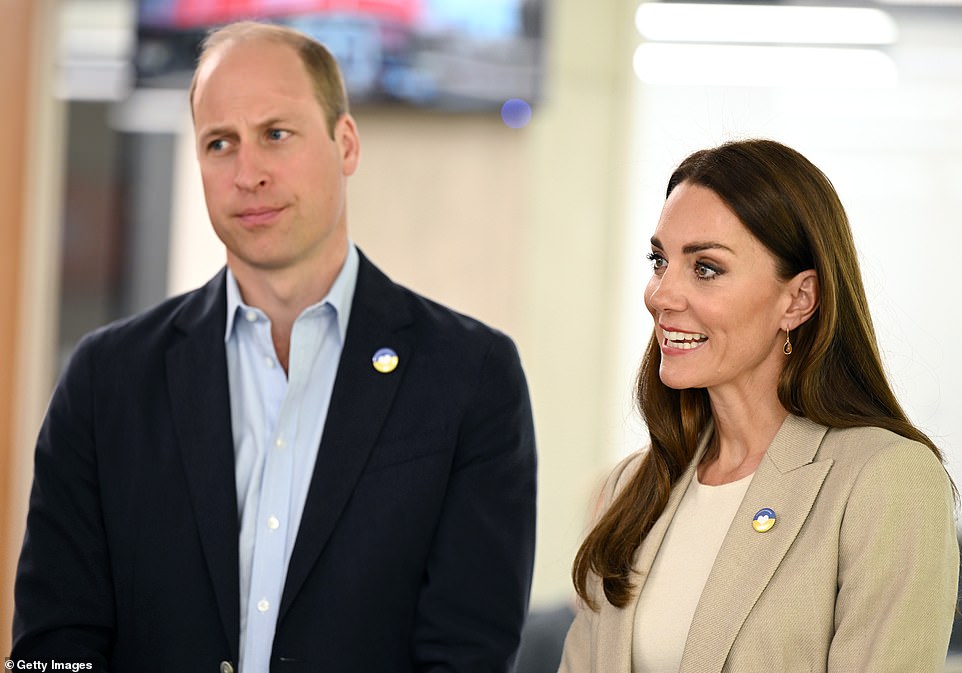 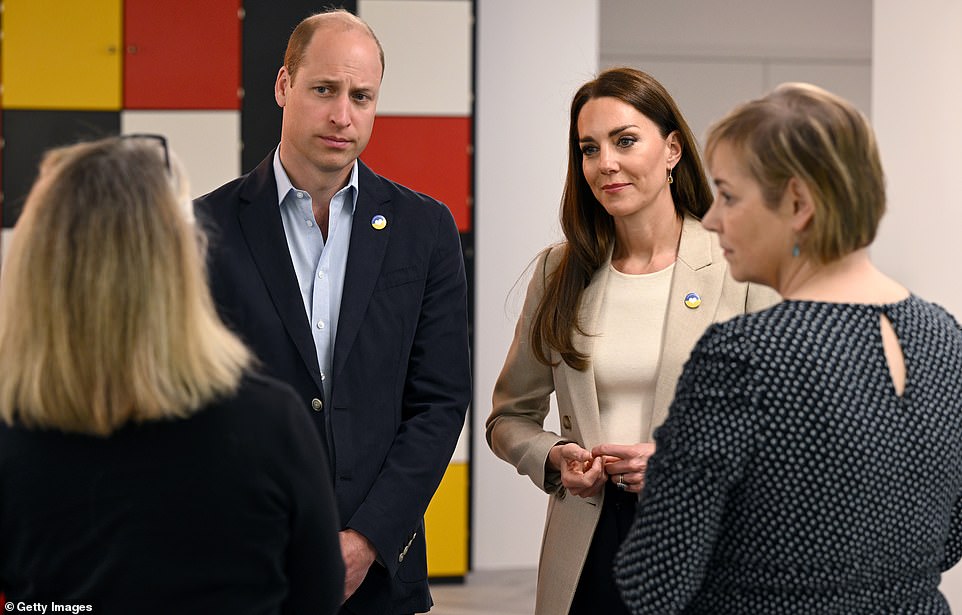 Prince William and Kate were relaxed during the visit to the organisation today, where they both sported pins in support of Ukraine (pictured left and right) 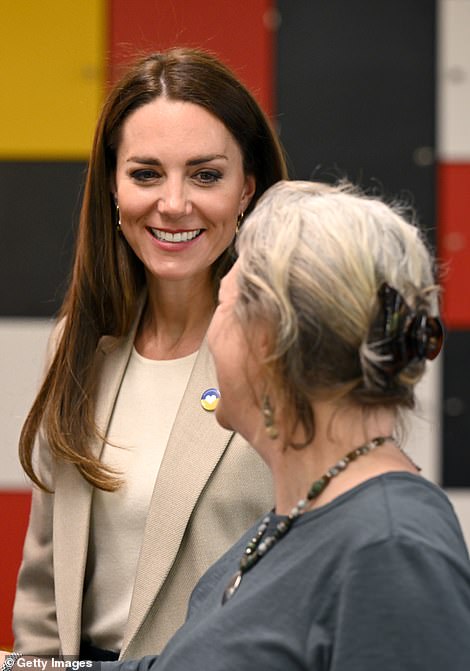 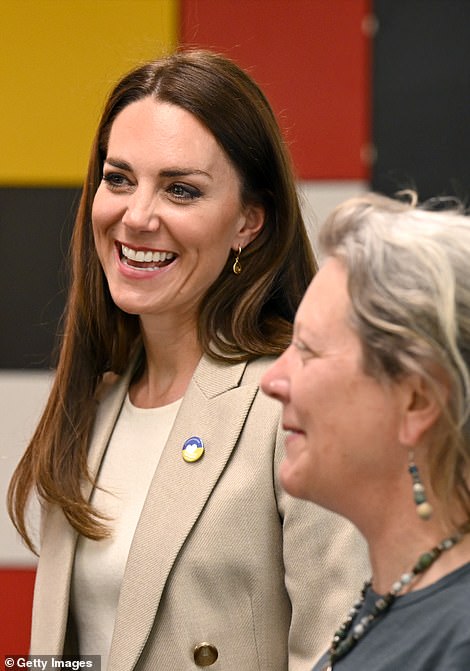 The Duchess, who previously told how her children had asked her about the conflict in Ukraine, beamed as she chatted with aid workers 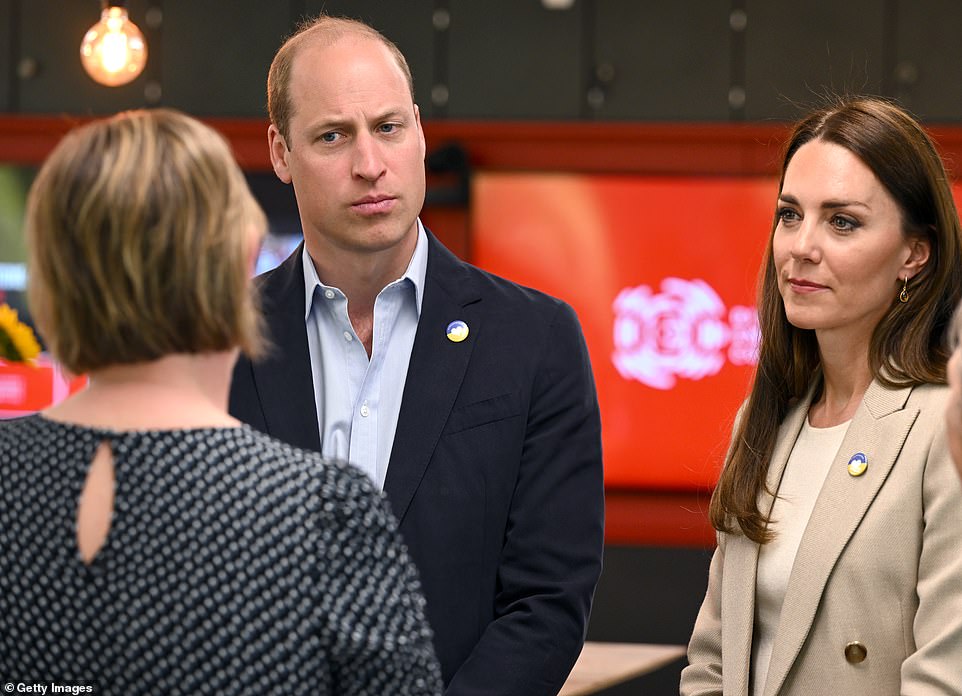 Vanessa Maynard, Programmes and Operations Officer for Christian Aid told the Duke and Duchess: ‘I’ve just returned from Hungary where with DEC funds we’ve been responding rapidly through our existing network of local partners.

‘We’re helping integrate refugees into the communities by supporting them with group cash so they can decide for themselves how best to address their specific needs like buying nappies, paying rent for the lodgings in host communities, or even pet food as many have fled with their animals as they couldn’t bear to leave without them.

‘We’re also providing them with hot meals, temporary rest in community centres, safe spaces for children to receive trauma care, and information on their rights when they arrive in the host countries.’

It comes as 13 member charities of the DEC that are responding to the crisis have laid out their plans for their response over the first six months.

Many charities started spending funds immediately and these plans now give a more detailed account of how DEC charities plan to spend money up until the end of August – although because the situation is so fluid that they may be adjusted to suit the needs on the ground. 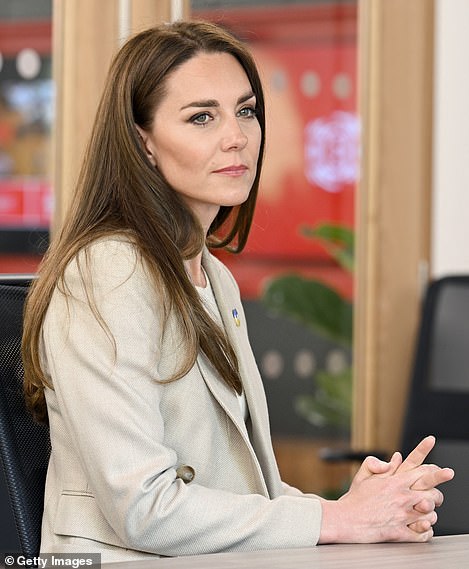 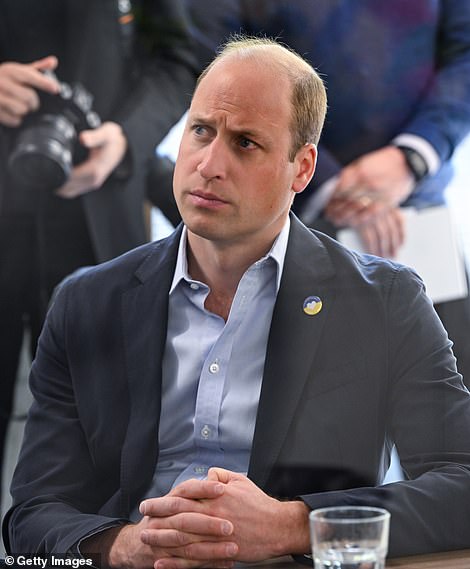 Further showing their support, both Prince William and Kate sported pins showcasing the blue and yellow of the Ukrainian flag underneath a white love heart (pictured left and right) 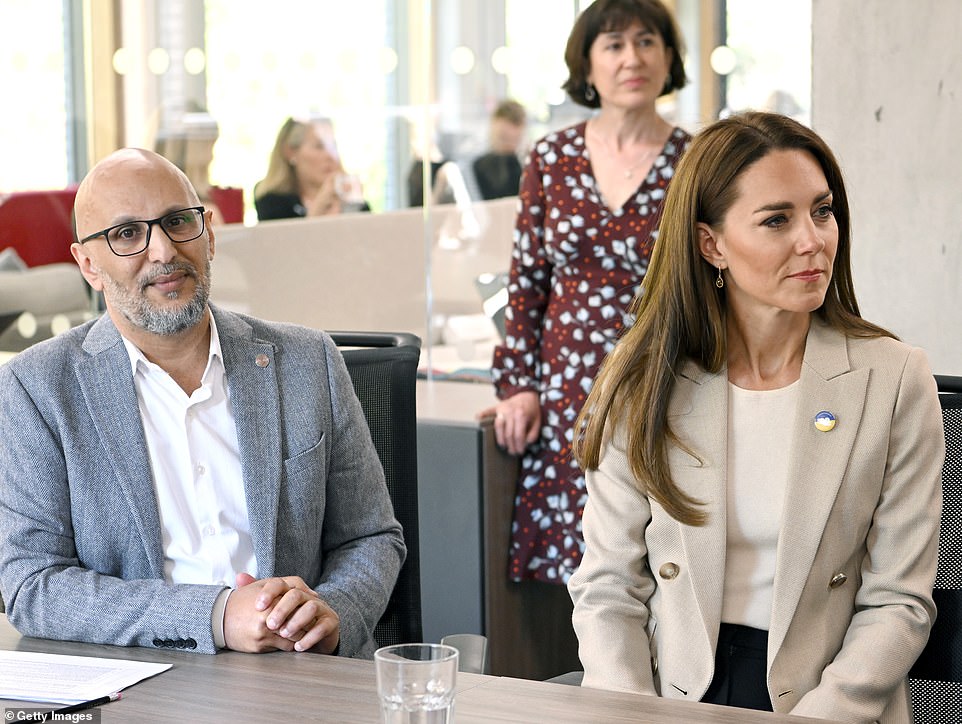 The Duchess, who appeared to fight back tears over the crisis when visiting the Ukrainian Cultural Centre in London in March, was pensive during the call 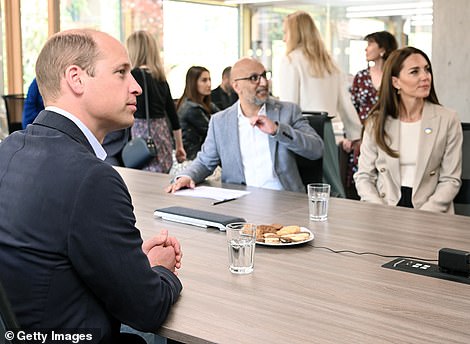 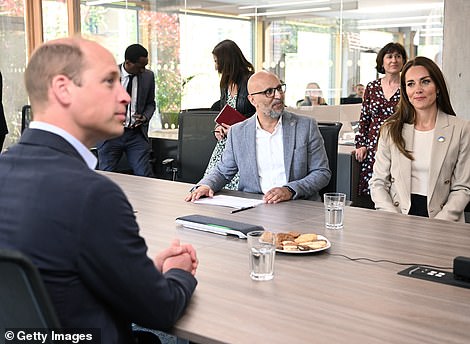 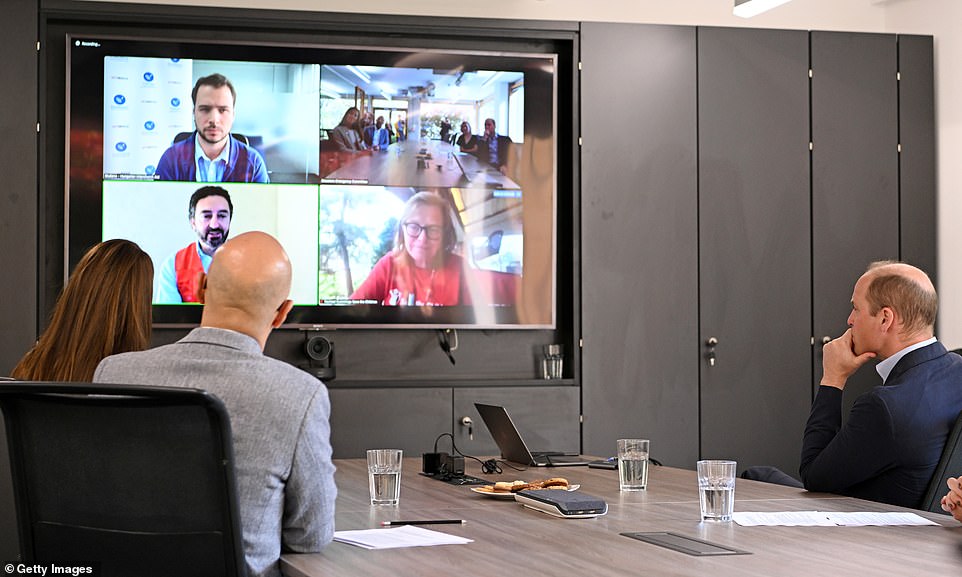 Kate and William, who have previously spoken of how their children were questioning them about the conflict, spoke with aid workers on the ground today 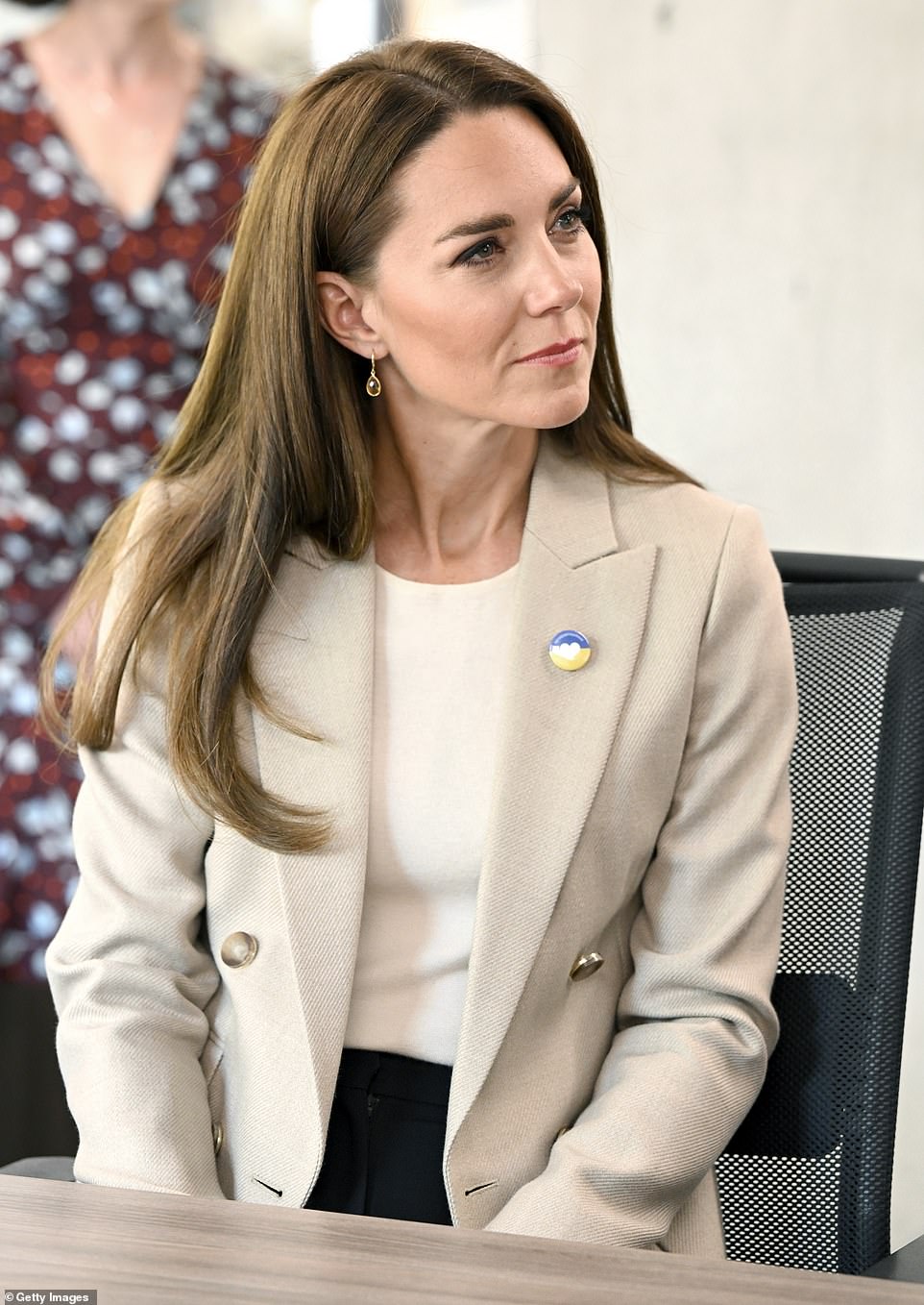 The mother-of-three swept her glossy brunette hair back from her face, completing her look with a subtle pink lipstick and bronzer 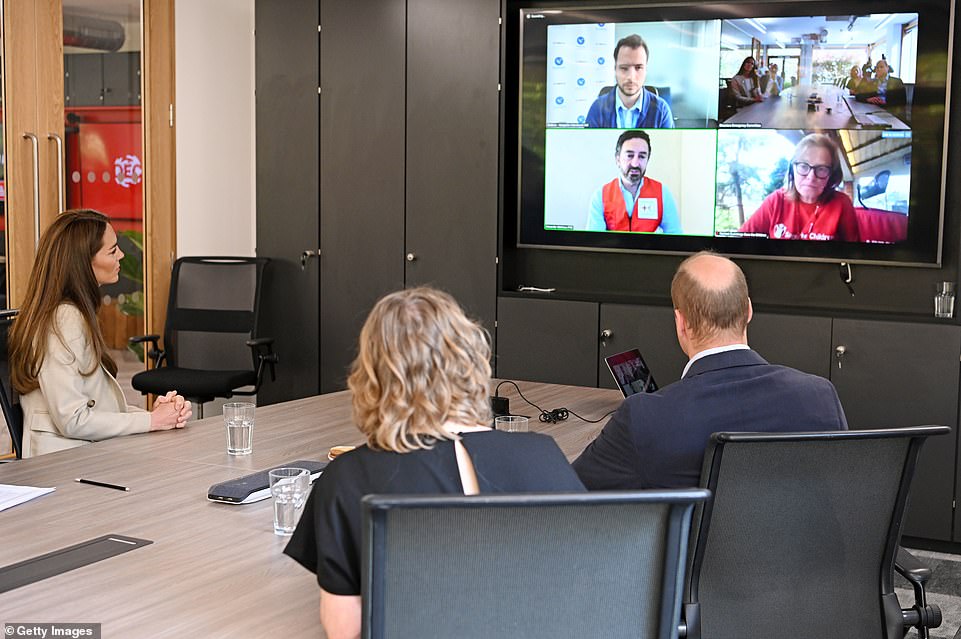 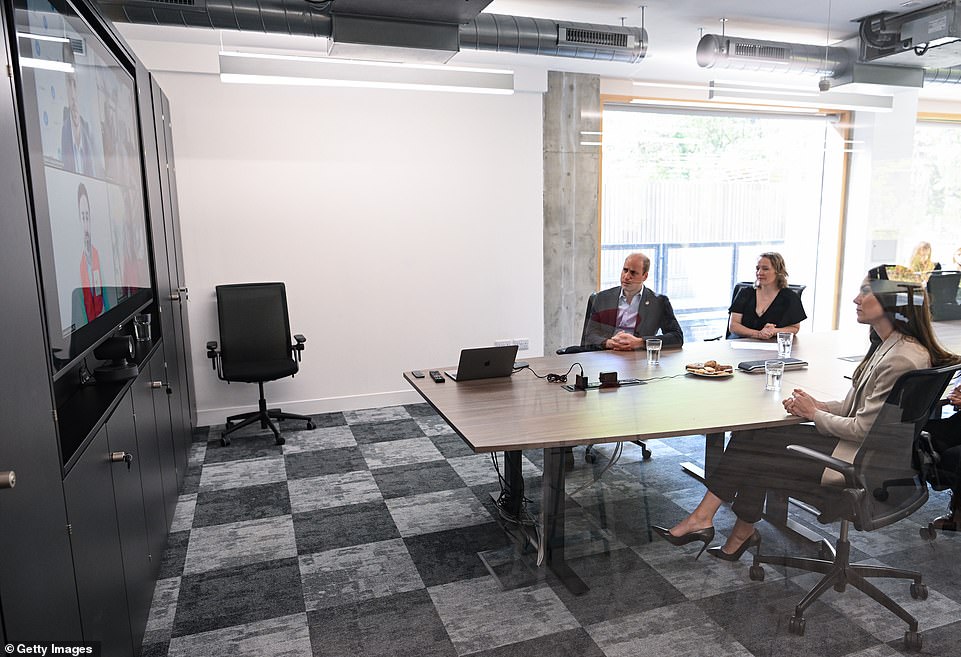 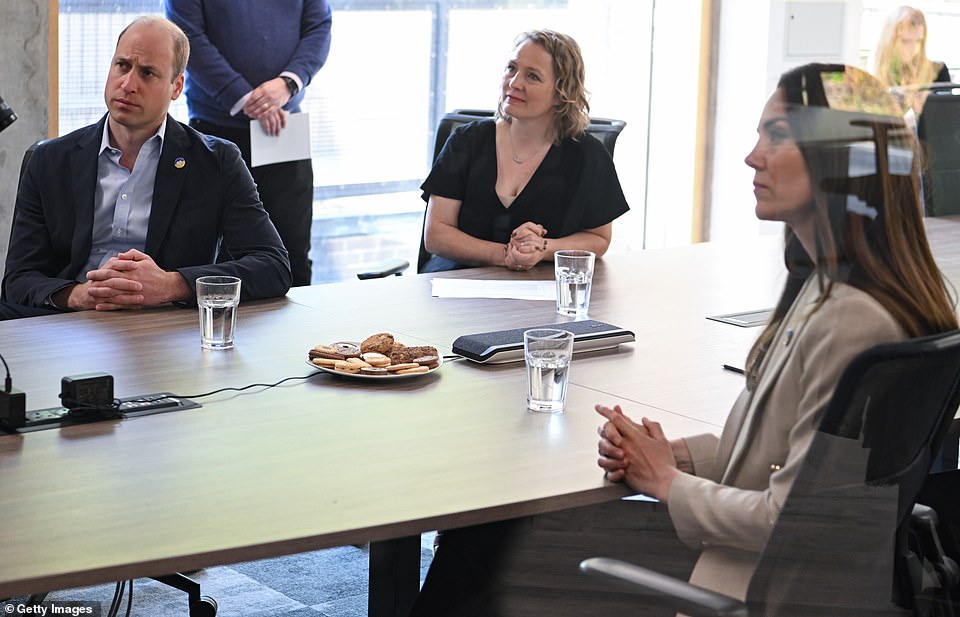 During the conversation, the Duke and Duchess heard about how events unfolding in Ukraine threaten to exacerbate existing humanitarian crises elsewhere in the world

DEC Chief Executive Saleh explained: ‘DEC charities have been quickly and efficiently scaling up their work to help people inside Ukraine and refugees fleeing over the border.

‘We are seeing the real impact of the work they are doing, whether that is incubators for babies born under bombardment in Ukraine or vital protection work to ensure that vulnerable refugees are kept safe as they flee the conflict.

‘We are incredibly grateful to the generous British public, to all the inspiring people and organisations that continue to do all they can to support people affected by this devastating conflict.

‘We have seen everything from homemade badges sold in village shops to beautiful limited-edition artwork and of course, the Concert for Ukraine, which was broadcast not only nationally, but inside Ukraine as people watched the visible display of support from laptops in underground bunkers. It feels as though everyone is doing their bit and more.’

It’s not the first time the couple have offered support to the appeal from the DEC.

In March, the Duchess appeared to fight back tears over the Ukraine crisis when visiting the Ukrainian Cultural Centre in London. 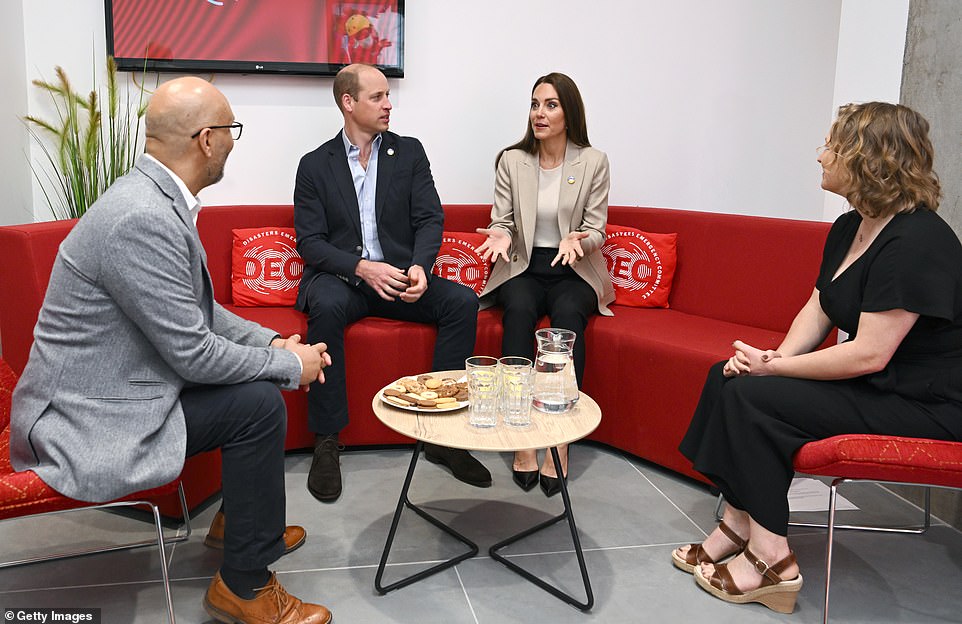 The Duchess was animated while chatting with Saleh Saeed, CEO of DEC, and Hannah Richards, Director of Communications at DEC, during a visit the London headquarters 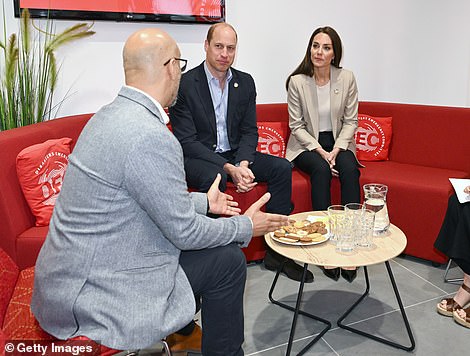 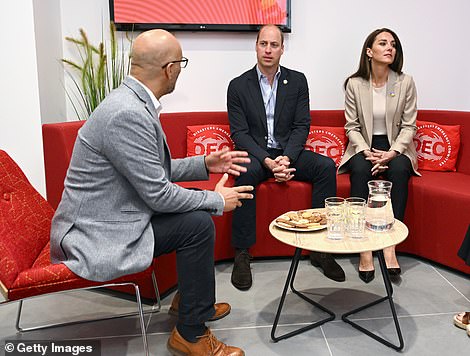 The duke and duchess, who revealed their eldest children have been questioning them about the conflict, brought trays of homemade chocolate brownies and granola bars with them from Kensington Palace to give to the members of the Ukrainian community and volunteers they met.

At the time, they also spoke with Saleh to learn more about the ongoing Ukraine Humanitarian Appeal and how best the UK public can continue to support Ukraine.

The couple’s visit today comes as members of the royal family were left reeling after Prince Harry gave another explosive interview on American TV.

Harry, 37, was speaking to breakfast show Today from the Invictus Games in the Netherlands, where he is spending the week after flying in from California with wife Meghan.

Prince Charles is said to be at the end of his tether with his youngest son as palace staff who cared for Her Majesty throughout the pandemic accused the Duke of ‘breathtaking arrogance’ over his suggestion his grandmother needs extra protection. 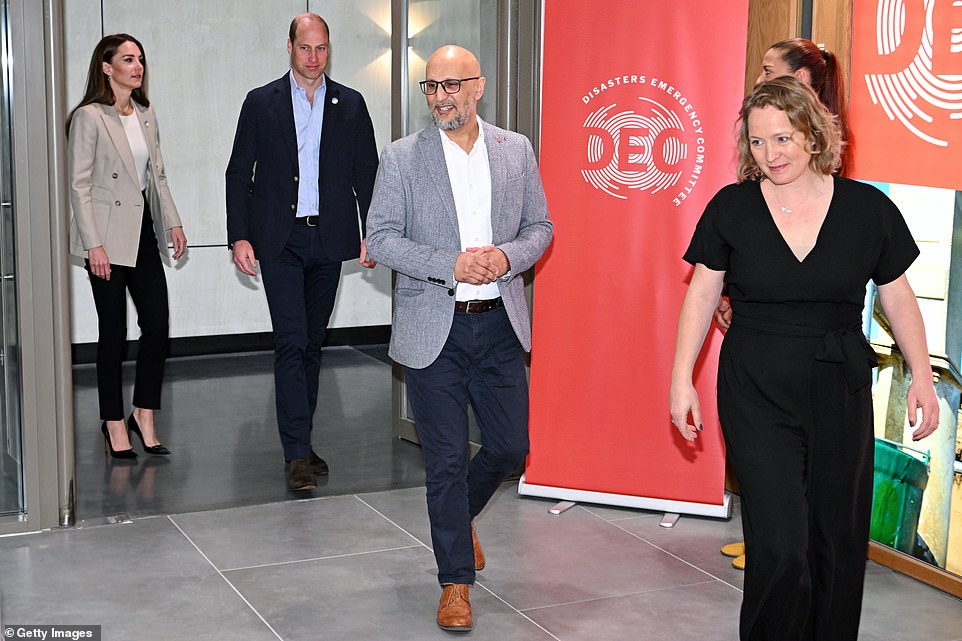 The Duke and Duchess of Cambridge are carrying on as usual during the visit today, and appeared relaxed as they arrived at the engagement 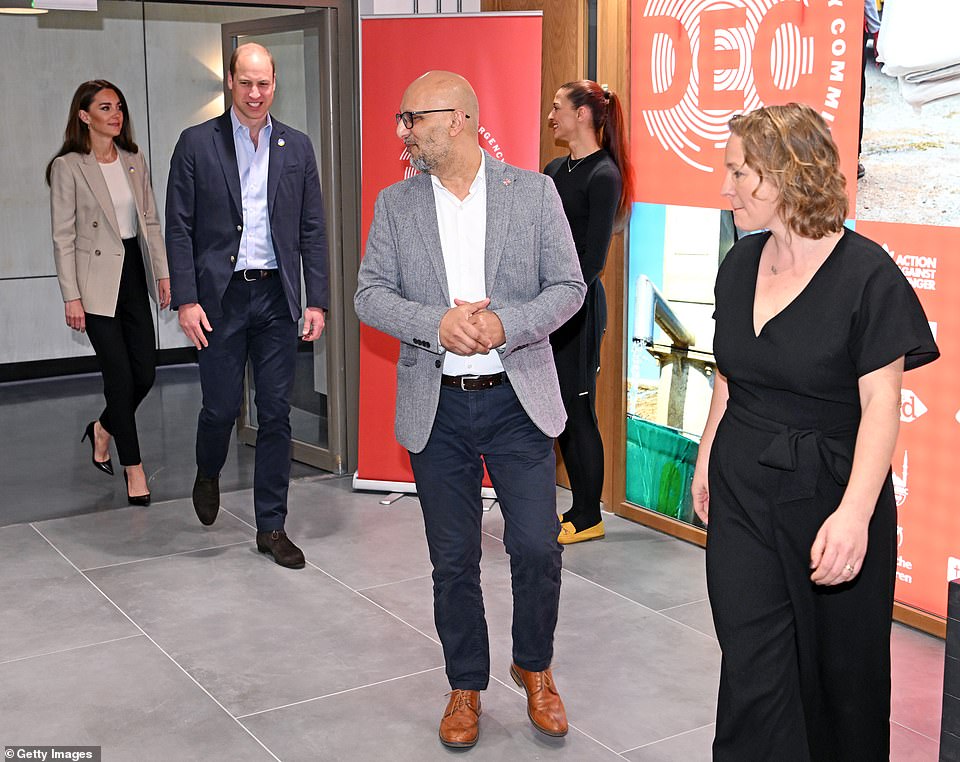 The Duchess, who has previously appeared emotional when discussing the Ukrainian crisis, offered a lesson in business chic today in her smart beige blazer 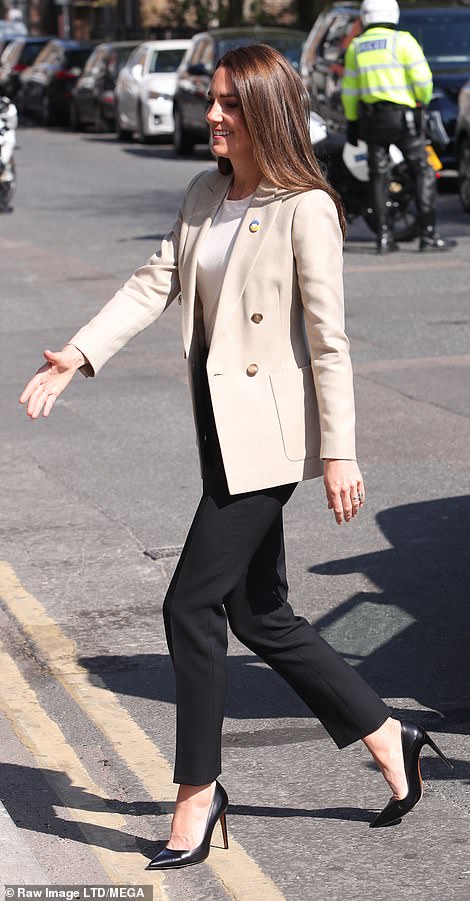 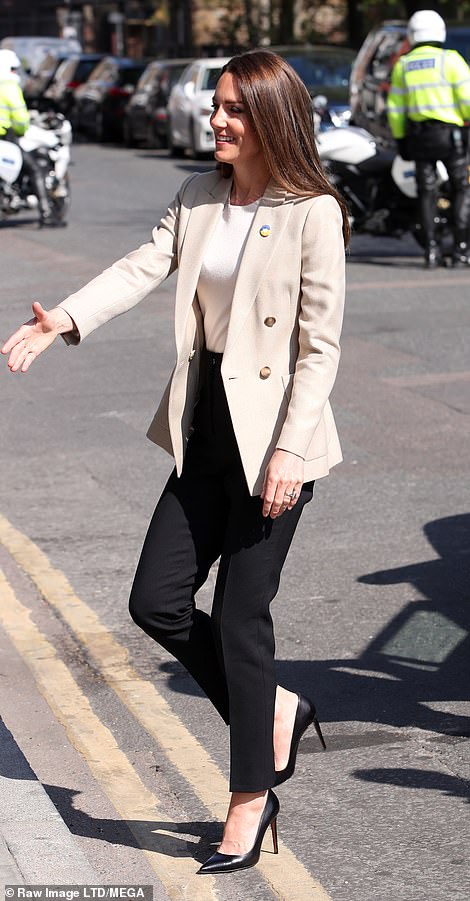 The mother-of-three gave a lesson in business chic during the outing in London today, where she paired a smart cream blazer with dark trousers and black heels

He claimed that she confides in him things she can’t talk to anyone else about. And in a barbed comment he said of his visit to Windsor Castle last week: ‘I’m just making sure that she’s protected and got the right people around her’.

He also risked further fuelling the rift with his estranged older brother by stating that their late mother, Diana, Princess of Wales, was now watching over him from beyond the grave as ‘she’s done her bit’ with Prince William and his family.

Prince Harry and Prince William are said to have barely spoken and had an ‘incredibly strained’ relationship after two years of rows over Meghan Markle and her alleged treatment of staff, the couple’s decision to emigrate to America and the ‘truth bombs’ the Sussexes have dropped in TV interviews watched by tens of millions of people around the world. 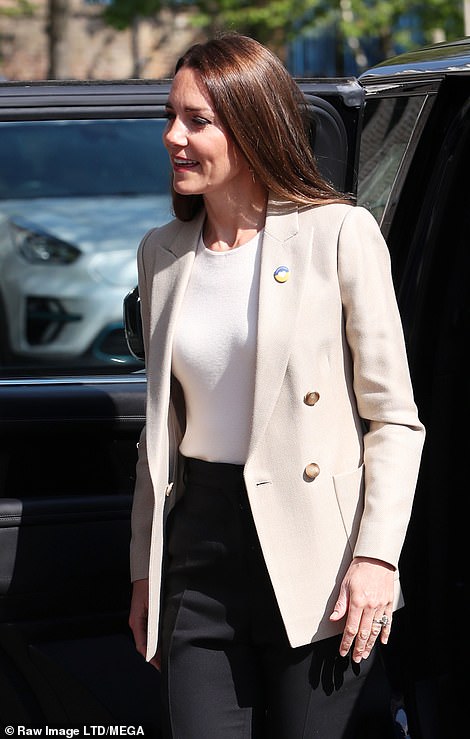 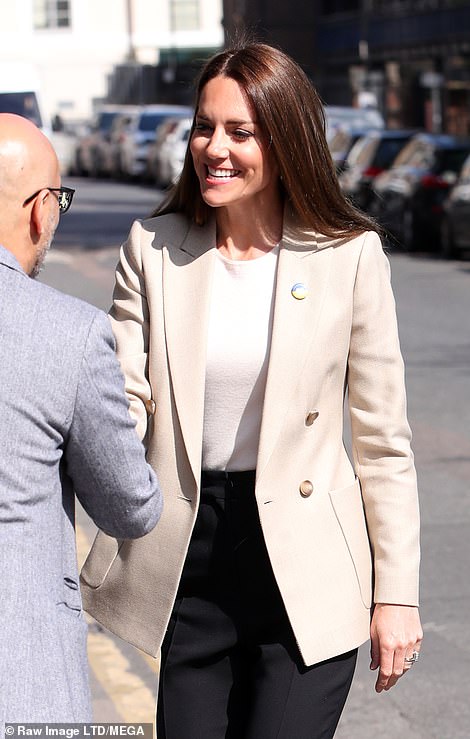 The couple stopped off en route to see the Queen at Windsor Castle last Thursday, the first time the Duchess of Sussex has set foot in the UK for more than two years. Harry had not seen his grandmother, who turns 96 today, since early last summer.

However the Duke and Duchess of Cambridge were away holidaying in the French Alps with their children – just as Prince Harry and Meghan visited the Queen and Prince Charles for a peace offering in Windsor.

It is understood Prince William and Kate were staying in the resort of Courcheval, with a picture circulating online of them watching their eldest son Prince George enjoy a skiing lesson.

Royal correspondent Robert Jobson said that it was ‘significant’ that the couple were not involved in the meeting between Harry and Meghan and other senior royals.

Why are modern mothers rage? It’s one of the last remaining taboos of motherhood

Madison Beer steps out in low-rise jeans and sweater over crop top for shopping...