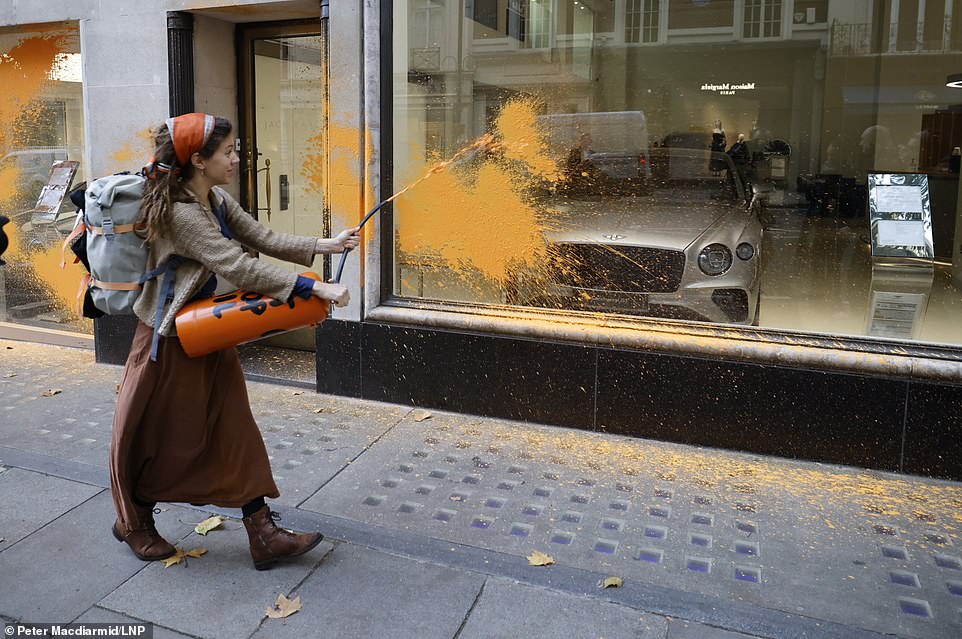 By Elly Blake For Mailonline

Two eco activists were seen dousing the car showrooms with the orange substance from a fire extinguisher at around 8.30am on Wednesday, marking the mob’s 28th protest this month.

The group is demanding that the government halts all new oil and gas licences and consents. 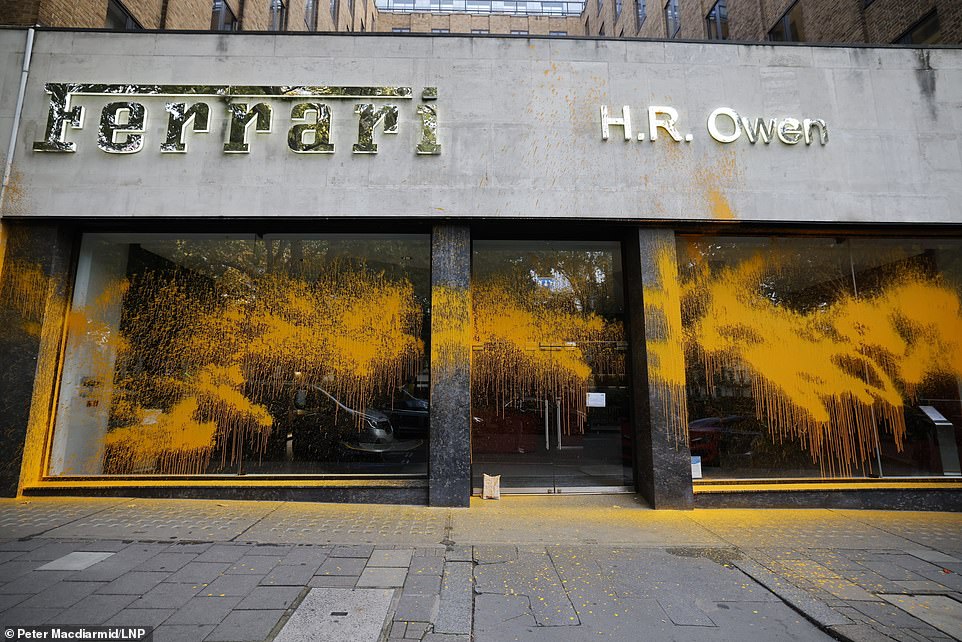 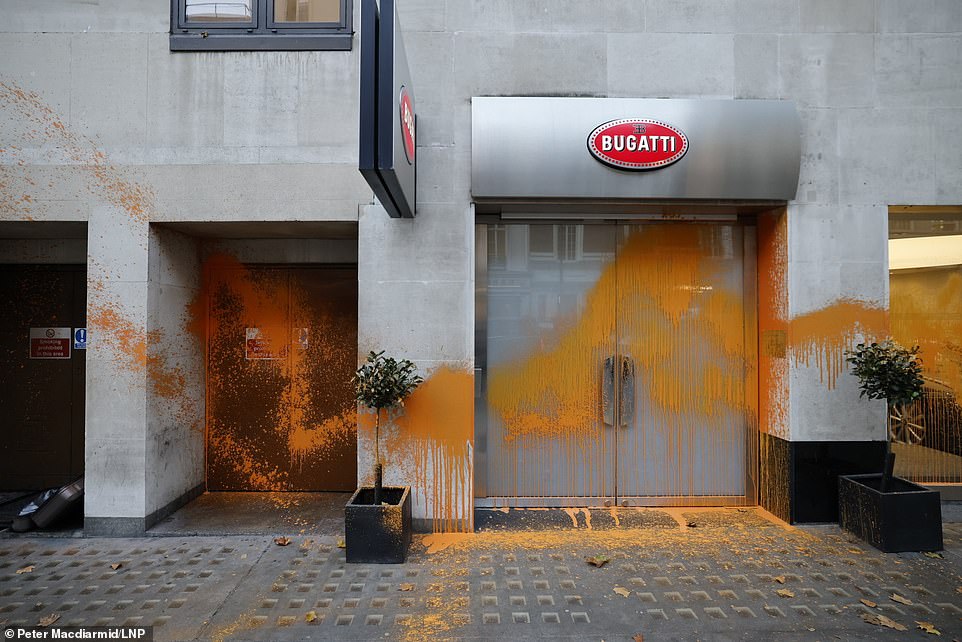 Carmen Lean, 28, an architecture student from Glasgow said: ‘We pay exorbitant bills for oil and gas but it’s nothing compared to the price our kids will pay for it.

‘New oil and gas is a death sentence for people all around the world. You can throw us in prison but it won’t stop our outrage at this government throwing millions of people under the bus. We’re not asking for no new oil, we’re demanding it.

‘This government is using the crisis to push through more austerity on one hand and new oil licences on the other.

‘Both are death sentences. If this government cared about people, they would be insulating homes, investing in affordable public transport and massively scaling up renewables.”

Emma Brown, 31, from Glasgow said: ‘We have come down from Scotland to demand this toxic government in Westminster do another U-turn.

‘This time on our broken energy system. Get your hands off our North Sea Oil and rapidly upscale the renewable energies that will prevent catastrophic climate breakdown and reduce our bills.

‘This is the immediate action we need to help the cost of living and the climate crisis. Not more oil for billionaires to profit from.’ 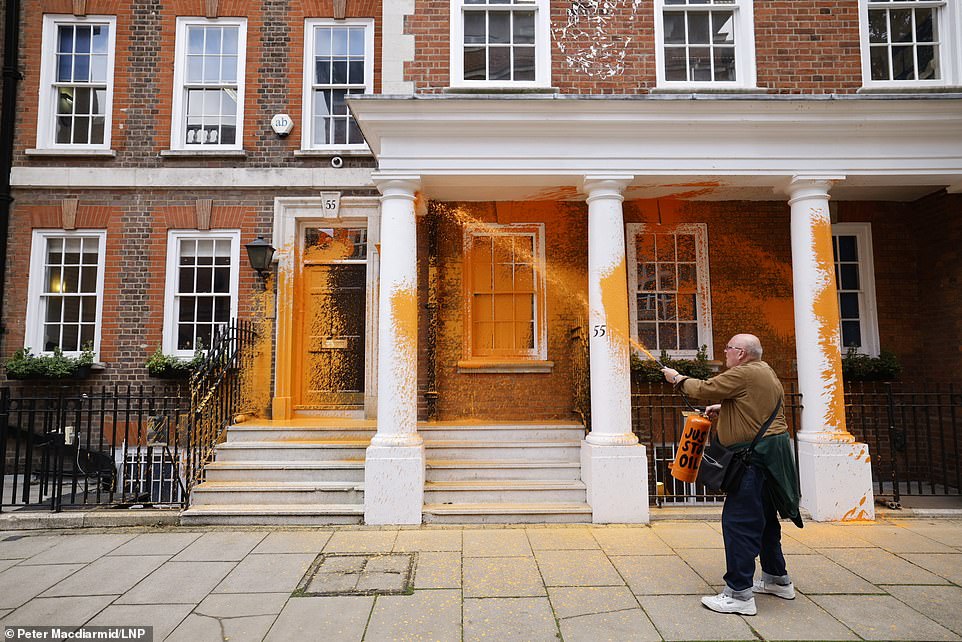 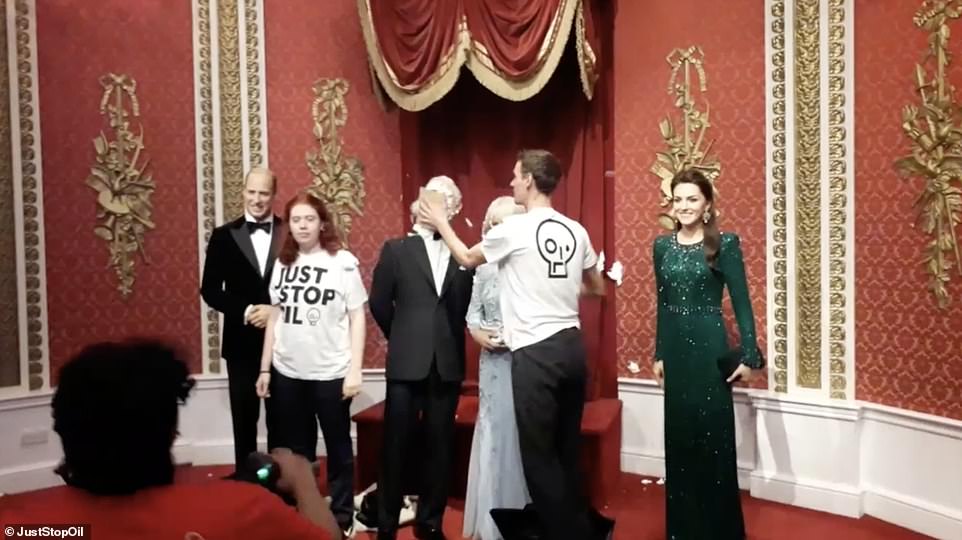 Yesterday, footage emerged of a fanatic dousing the front of 55 Tufton Street in Westminster, home to the Global Warming Policy Foundation (GWPF) and other fossil fuel lobby groups, in the liquid this morning.

The spray paint came as part of a wider protest which saw a total of six protesters block Horseferry Road. Some protesters glued themselves onto the tarmac in the road while others locked themselves together.

A furious taxi driver was seen driving over the pavement as zealots lay in the middle of nearby Horseferry Road to block traffic. The Metropolitan Police said the chaos was cleared up by 1.20pm.

The protester who threw the paint, identified by Just Stop Oil as a ‘normal guy from south London’, said he attacked the property in an attempt to fight ‘big oil, famine, pestilence and war’.

On Monday, a group of protesters were arrested for throwing chocolate cake in the face of a waxwork of King Charles III at Madame Tussauds.

A declaration of war: How royal insiders describe Netflix trailer for Harry and Meghan...