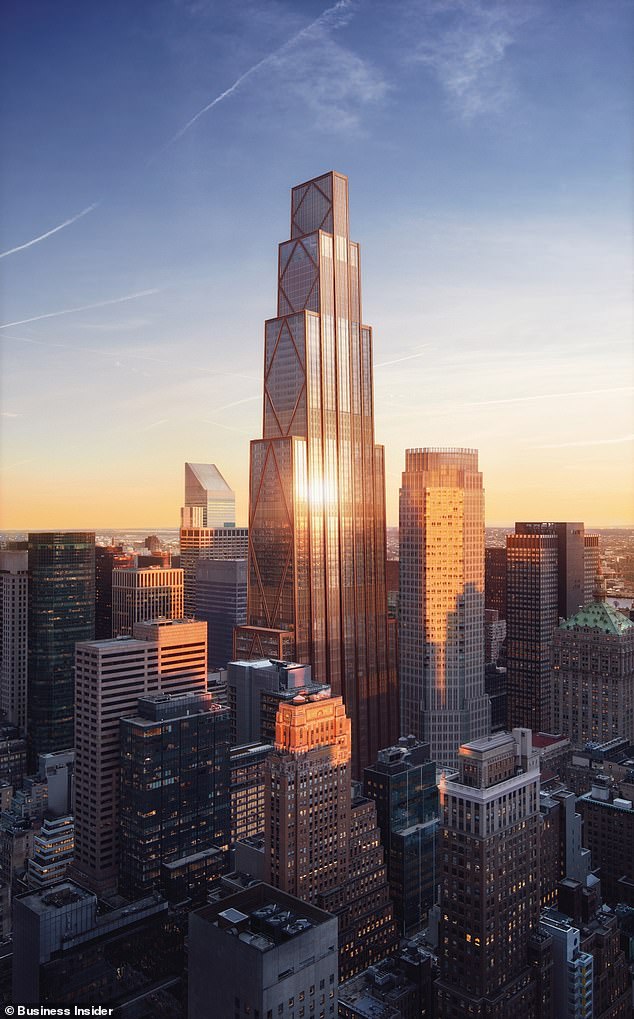 JPMorgan Chase has unveiled for the first time its design for a new all-electric 60-story skyscraper in the middle of Park Avenue in New York City.

The investment bank unveiled the design of its massive 1,388-foot-tall super structure, which began construction in 2021 and is set to be completed by the end of 2025.

JPMorgan Chase unveiled the design of its new massive 1,388-foot super structure, which is set to be completed by the end of 2025 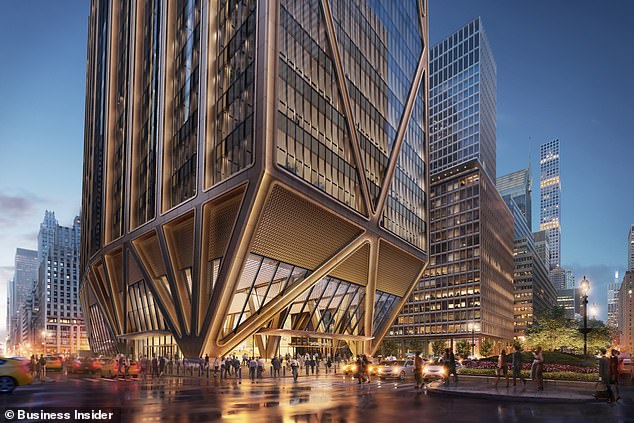 The building, designed by British architecture firm Foster + Partners, will feature a fan-column structure and triangular bracing that will lift the building about 80 feet off the ground, extending the viewpoint from the Park Avenue through to Madison Avenue.

The skyscraper, standing 500 feet taller than the bank’s previous, will have enough space for 14,000 employees compared to its predecessor, which was designed for just 3,500.

The building is set to help boost the New York City economy following the pandemic.

The construction of the building is projected to create 8,000 jobs across 40 unions and the firm is set to create an additional 40,000 jobs across local industries, contributing $29.8 billion annually to the city’s economy, according to a Deloitte study.

The bank was able to settle on the location after the rezoning of East Midtown in 2017 that allowed larger new towers to go up in exchange for developers’ payments to the city for transit and public area improvements, the Post reported. 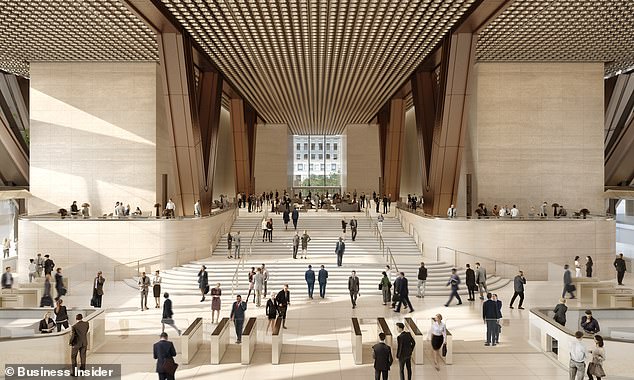 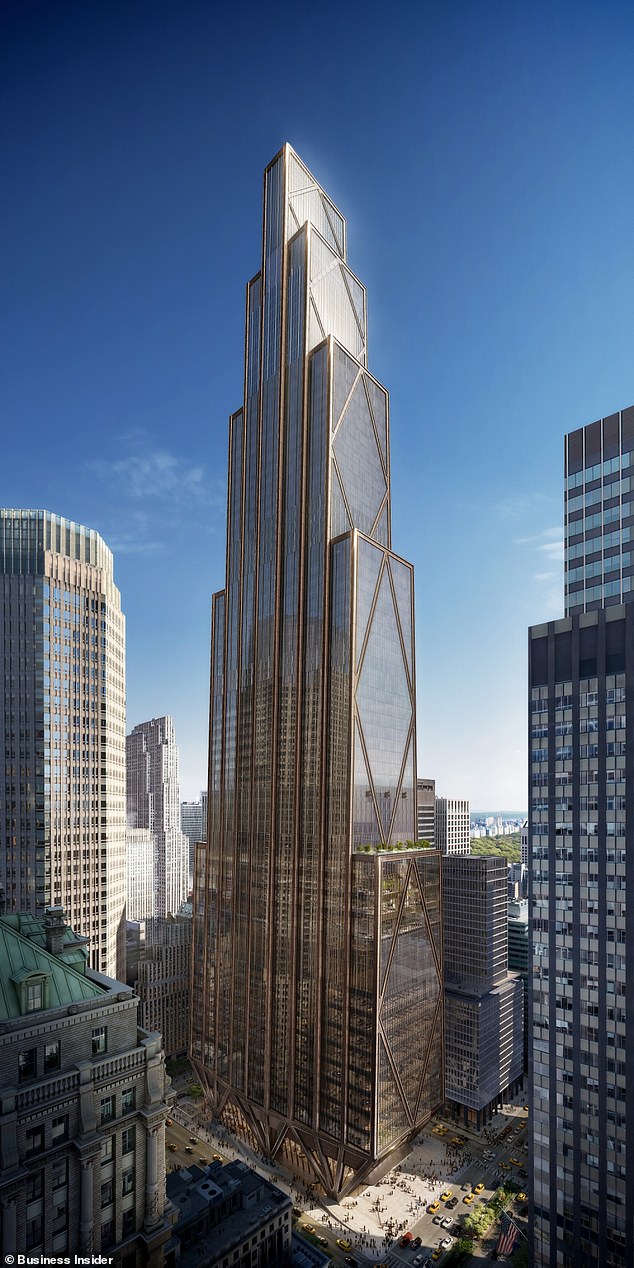 The skyscraper, standing 500 feet taller than the bank’s previous, will have enough space to 14,000 employees compared to its predecessor, which was designed for just 3,500

‘With our new headquarters, JPMorgan Chase is making a long-term investment in our business and New York City’s future while ensuring that we operate in a highly efficient and world-class environment for the 21st century,’ Dimon told Business Wire in a statement. ‘We are extremely excited about the building’s state-of-the-art technology, health and wellness amenities, and public spaces, among many other features. It is in the best location in one of the world’s greatest cities.’

JP Morgan reportedly contributed $65 million to ‘public realm’ improvements which include working with the MTA to create a new street entrance to Grand Central Terminal, the Post reported.

‘It was challenging to thread the foundation of the new headquarters through historic Grand Central Station and the new LIRR Terminal below it, but we couldn’t have a better partner than JPMorgan Chase,’ MTA Chair and CEO Janno Lieber told Business Wire in a statement.

Chase’s new skyscraper is just one of many popping up on the New York City skyline as of late. Last week the 84-story Steinway Tower, located at 11 West 57th Street on Billionaires’ Row in midtown Manhattan, opened its doors to customers.

At approximately 1,428 feet tall, and just 57 feet wide, Steinway Tower falls only a few feet short of being the tallest residential tower in the world, edged out by next-door neighbor Central Park Tower, which stands at 1,550 feet. 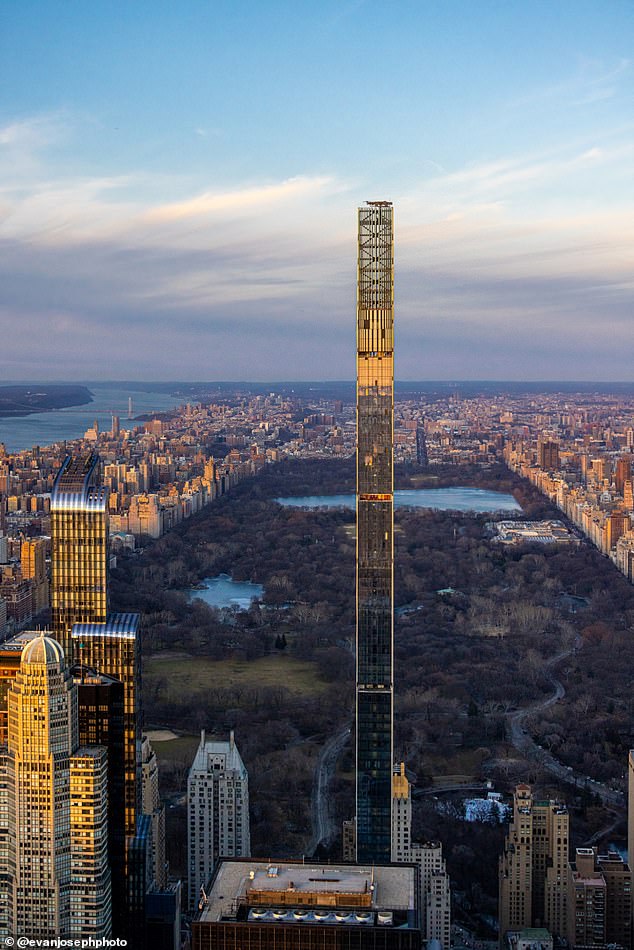 Steinway Tower, the world’s skinniest skyscraper, is standing tall amid the New York City skyline and ready to welcome residents to its multi-million dollar luxury apartments 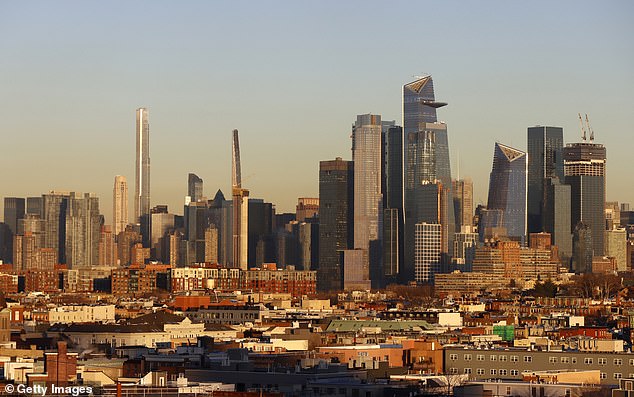 The sun sets on Central Park Tower and the Steinway Tower on Billionaires’ Row, Hudson Yards and One and Two Manhattan West in New York City along with Hoboken, New Jersey, as seen from Jersey City, New Jersey 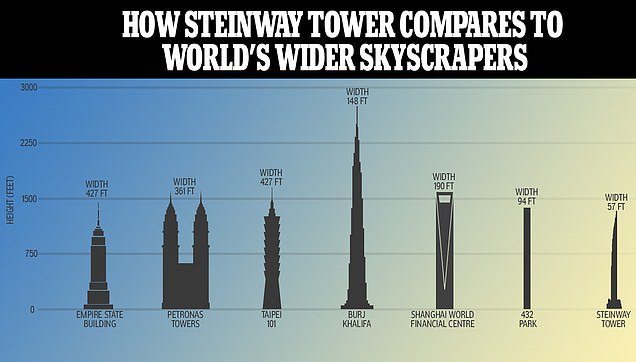 Steinway Tower has a height-to-width ratio of 24:1, making it both the ‘most slender skyscraper in the world’ and one of the tallest buildings in the Western hemisphere

Manhattan’s own One World Trade Center at 1,776 feet is the city’s tallest building. The newly finished development, which overlooks Central Park, features 60 apartments – starting at $7.75million for a studio unit.

The penthouse apartment is listed for $66million. Steinway Tower was designed to be ‘a project of extraordinary proportions and epic grandeur,’ developers told the news outlet. ‘Any preconceived notions that our team had about skyscrapers of New York City developments were replaced with an opportunity to do something that had never been done before,’ Gregg Pasquarelli, principal at SHoP Architects, said.

The architects sought to make a powerful statement with the building, having it elegantly taper from its tip, which houses a triplex penthouse apartment.

The design team’s main goal was to create a ‘new and bold interpretation’ of New York’s skyline while also memorializing the area’s historic roots. They drew inspiration from ‘the golden age of the Manhattan skyscraper’ and the city’s Art Deco history.

Steinway Tower is an addition to adjacent Steinway Hall, once a cultural hub in Manhattan.

The landmarked Steinway Hall, constructed in 1925, served as a concert hall and the former headquarters of piano maker Steinway and Sons.

The venue has since been converted into luxury residences which now connect to the super-tall, slender tower. Steinway Tower construction began in 2013 and was completed in 2021. Residents are just now able to move into the complex.

Despicable Ten: Ukraine reveals faces of Russians accused of being the ‘Butchers of Bucha’

Plane rules: Flight attendant spills the ONE annoying thing thousands of passengers do