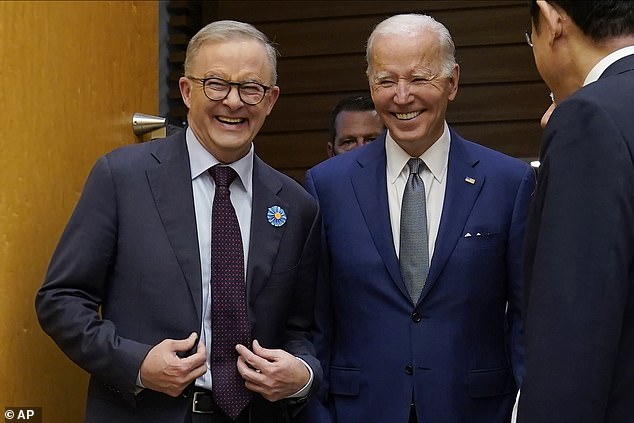 Joe Biden has praised Anthony Albanese‘s energy after the new Prime Minister flew to Tokyo for a Quad leaders’ summit on his first day in the job.

The 79-year-old US President, who famously fell asleep during the COP26 climate summit in Glasgow last year, told Mr Albanese: ‘If you fall asleep while you’re here, it’s OK’.

In his first appearance on the world stage, the Labor leader laughed at the self-deprecating joke along with the diplomats and journalists in the room. 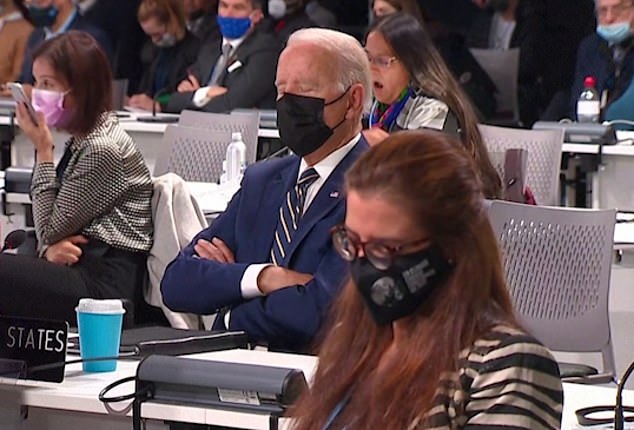 Mr Albanese, 59, was sworn in as Prime Minister on Monday and immediately flew to Tokyo for the Quad summit with the US, Japan and India.

The alliance as set up to counter the growing assertiveness of China in the Indo-Pacific.

Mr Albanese will be returning to Australia on Wednesday afternoon after the whirlwind visit.

‘Prime Minister Albanese, I welcome you to your first Quad meeting. Like I said, you got sworn in, got on a plane and if you fall asleep while you’re here, it’s OK because I don’t know how you’re doing it,’ he said.

‘It’s really quite extraordinary just getting off the campaign trail as well.

‘Congratulations on your election. When you won and I called you, we greatly appreciate your commitment on being here so soon after taking office.’ 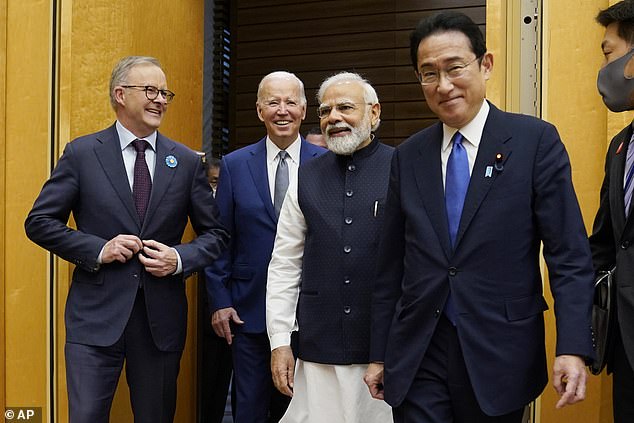 Mr Albanese said that Australia’s commitment to the Quad remained steadfast despite the change in government.

‘We have had a change of government in Australia, but Australia’s commitment to the Quad has not changed and will not change,’ he said.

‘And our commitment to ASEAN (an alliance of south-east Asian nations) and its centrality has not changed.

‘My government has already committed to a greater focus on South-East Asia, including the appointment of a Special Envoy for the region and $470million in additional foreign aid over the next four years.’

The Quad leaders were set to discuss security concerns in the region, including the signing of a security pact between China and the Solomon Islands, as well as climate change, infrastructure needs and collaboration on disaster relief.

It comes as the Chinese foreign minister is due to touch down in Honiara later in the week to officially sign the agreement.

The Quad is also set to unveil new maritime measures to curb illegal fishing in the Indo-Pacific, including using satellite technology to track illegal fishers, according to the Financial Times. 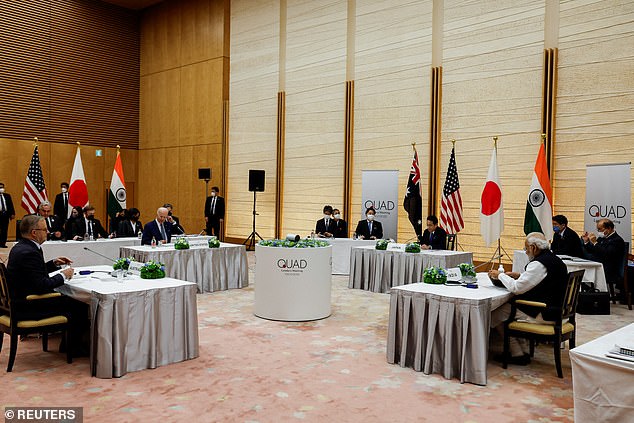 President Biden met with Prime Minister Kishida on Monday where he unveiled the Indo-Pacific Economic Framework for Prosperity, which includes a dozen initial partners making up 40 per cent of the world’s GDP.

Mr Albanese said the Quad dialogue would send a signal to the world that there was a new government in Australia.

‘It’s a government that represents a change in the way we deal with the world on issues like climate change, but also a continuity in the way we have respect for democracy and the way that we value our friendships and long-time alliances,’ he told reporters in Canberra before he departed on Monday.

Mr Albanese will also hold individual bilateral talks with the leaders throughout Tuesday.

The prime minister is joined by Foreign Minister Penny Wong, with the pair being briefed by the head of the Office of National Intelligence and top officials from the Department of Prime Minister and Cabinet and the Department of Foreign Affairs on the trip over.

Mr Albanese also had a 25-minute conversation with British Prime Minister Boris Johnson while in the air on Monday.

The pair discussed ongoing support for the trilateral AUKUS agreement and climate change, with Mr Albanese describing the call as a ‘friendly and very positive discussion about our strong relationships between our two countries’.

Mr Albanese received a phone call from President Biden on Sunday night, which the prime minister said was ‘fruitful and productive’.

I’m A Celebrity: Matt Hancock and Owen get covered CUSTARD while their co-stars CHEAT...

Johnny Depp gets emotional as his sister testifies about abusive childhood

Woman woke up from a coma of five months to discover her fiancé of...