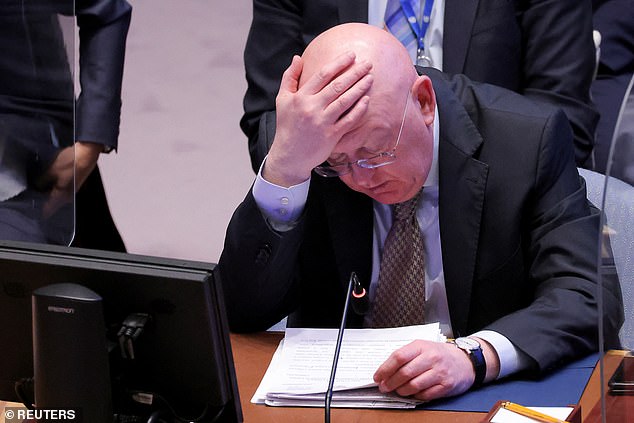 Ah, what could be more civilised than the inner chamber of the United Nations Security Council in New York?

Here, nation speaks unto nation in a safe space where global knots are untied and tensions smoothed away in the name of international peace and security. Well, that’s the idea, at any rate.

The chairs are arranged in a democratic semi-circle, for here there is neither hierarchy nor leader, only a sense of determination and purpose to make the world a better, safer place. Today’s business? The war in Ukraine.

UN Secretary-General Antonio Guterres began the meeting by calling it ‘one of the greatest challenges ever to the international order’.

Reading from a prepared speech, he added: ‘It must stop now’.

All agreed except the Russian representative Vasily Nebenzya who is going to veto any measure that might help Ukraine anyway, so what is the point?

As bald as a bullet and just as menacing, Nebenzya stuck to the sickening Russian narrative that it is the Ukrainians who are the aggressors, despite overwhelming international independent evidence to the contrary.

We all know. Everybody knows the truth. Perhaps it is a civilisation too far that all at the UN must politely listen to his words.

And then, from a war zone 4,000 miles away, Ukrainian President Volodymyr Zelensky was beamed in to address the Council.

His image appeared on a large screen in the chamber, from where it was televised around the world. The atmosphere immediately changed, quickened by the President’s own raw urgency.

Zelensky briskly reeled off the recent atrocities carried out by Russian troops against Ukrainian civilians in Bucha.

‘They were killed in their apartments… civilians crushed by tanks while sitting in their cars.’ He did not flinch from describing the soldiers’ savagery: Limbs were cut off, throats slashed, women raped, children killed, tongues pulled out, earrings torn from ears. ‘Just for their pleasure,’ he said. 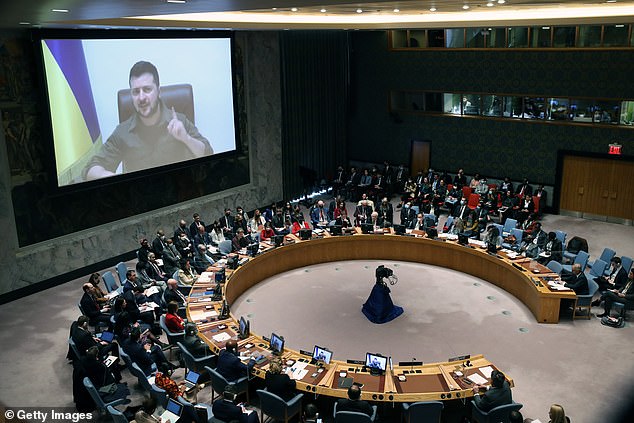 And all of this done by a member of the United Nations Security Council.

Zelensky told the UNSC that he wants its members to kick out Russia. If they cannot, then they should dissolve the Council, because they are letting Russia ‘sow death’ in his country.

Hasn’t he got a point? The sheer power of his presentation only emphasised the UN’s utter powerlessness.

The President was broadcasting from an anonymous room, the yellow and blue folds of a Ukrainian flag behind him.

He was dressed as usual in military-style clothes that stop short of being an actual uniform.

His presentation, as always, was impressive. Zelensky’s tone is insistent but never impatient, impassioned but never angry. With so much at stake, he understands that now is not the time to lose the room.

There are a thousand ways he could get his message wrong but he always gets it just right.

Like his reminder to the world that we have seen what happened in Bucha but we have yet to see what the Russian troops have done in other cities.

Earlier this week, Zelensky saw for himself the aftermath of Bucha. Photographs showed his begrimed face etched with horror.

It was the face of a man who has looked upon evil, a man who has aged a thousand years in 40 days and who is still fighting his own battle for more international help.

After his moving address, Linda Thomas-Greenfield, the US ambassador to the UN, said that ‘we stand with the people of Ukraine’.

The United Nations might well do but, for President Zelensky and his people, is that going to be enough?

Lori Vallow’s son reveals warning his ‘cult mom’ gave when he asked where his...

Members of Ricky Martin’s former boyband Menudo open up about rape and abuse they...