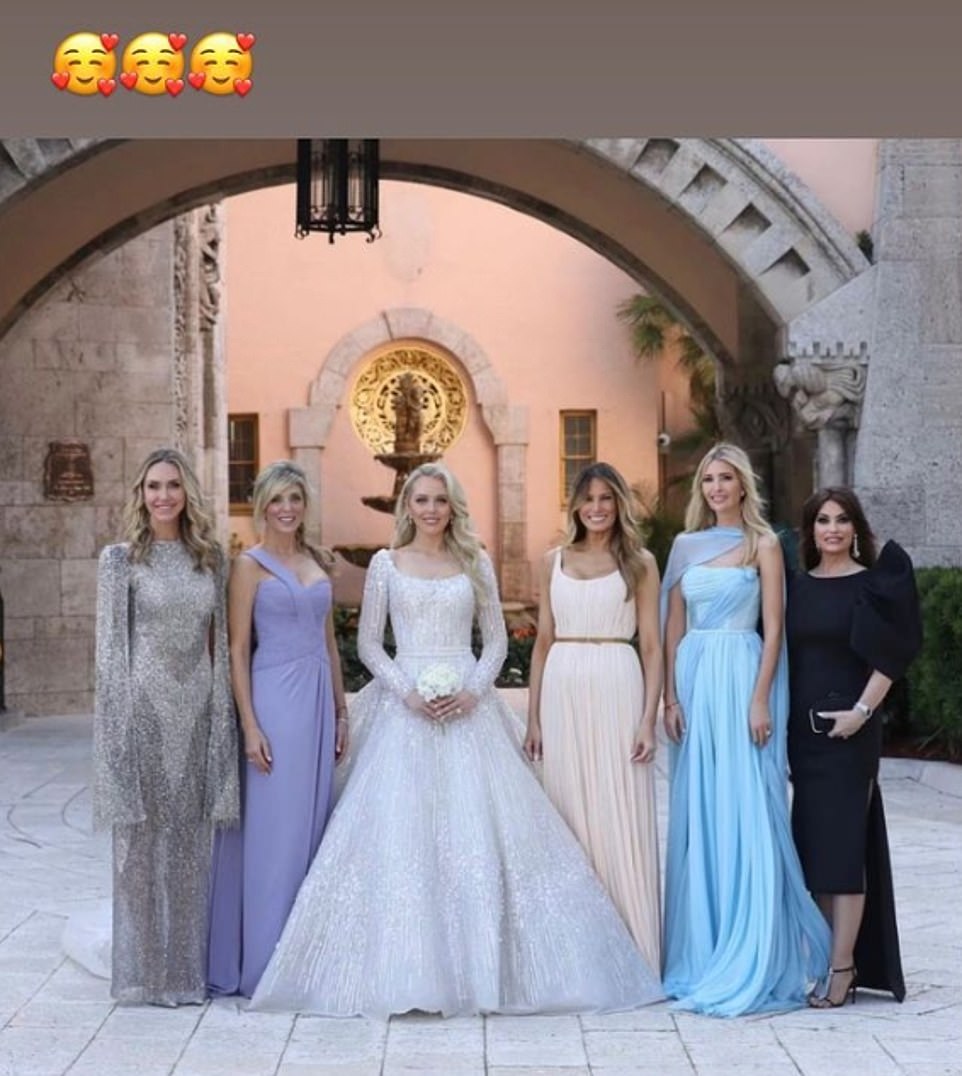 Ivanka Trump rectified her ‘terrible’ Instagram gaffe after cropping her brother’s fiancée Kimberly Guilfoyle out of photos from the family wedding over the weekend.

Ivanka, 41, was maid of honor at the wedding of her half-sister Tiffany Trump, 29, on Saturday. She married 25-year-old billionaire Michael Boulos, who she met on vacation with Lindsay Lohan in Mykonos in 2018.

All of the female family members were in pastel-colored or gold dresses, except for Guilfoyle, 53, who stood out in black at the end of the line-up.

In the photos Ivanka shared on social media, Guilfoyle had been cropped out, in what some claimed was a snub to Don Jr’s fiancée.

However Ivanka appeared to have acknowledged her social media faux pas by later sharing the original photo of all six women on her Instagram story with heart emojis.

Sources close to her said the pair spent a ‘lot of time together at the wedding and really have a wonderful relationship’ and that ‘Ivanka loves Kimberly and in no way would crop her out.’

The source went on to say: ‘The two women are very close and Kimberly has really become part of the Trump family. When Ivanka realized what had happened, she immediately reposted the photo’.

Ivanka did not delete the original post or story, which she followed up with some footage of the former President giving her some golf lessons, simply posting the original photo on her Instagram stories four hours later.

Oops! Ivanka rectified her ‘terrible mistake’ of cropping Kimberly Guilfoyle out of her gallery of pictures on Instagram by posting a story of the full line-up four hours later with a series of heart emojis. Sources close to her said the pair spent a ‘lot of time together at the wedding and really have a wonderful relationship’ and that ‘Ivanka loves Kimberly and in no way would crop her out’ 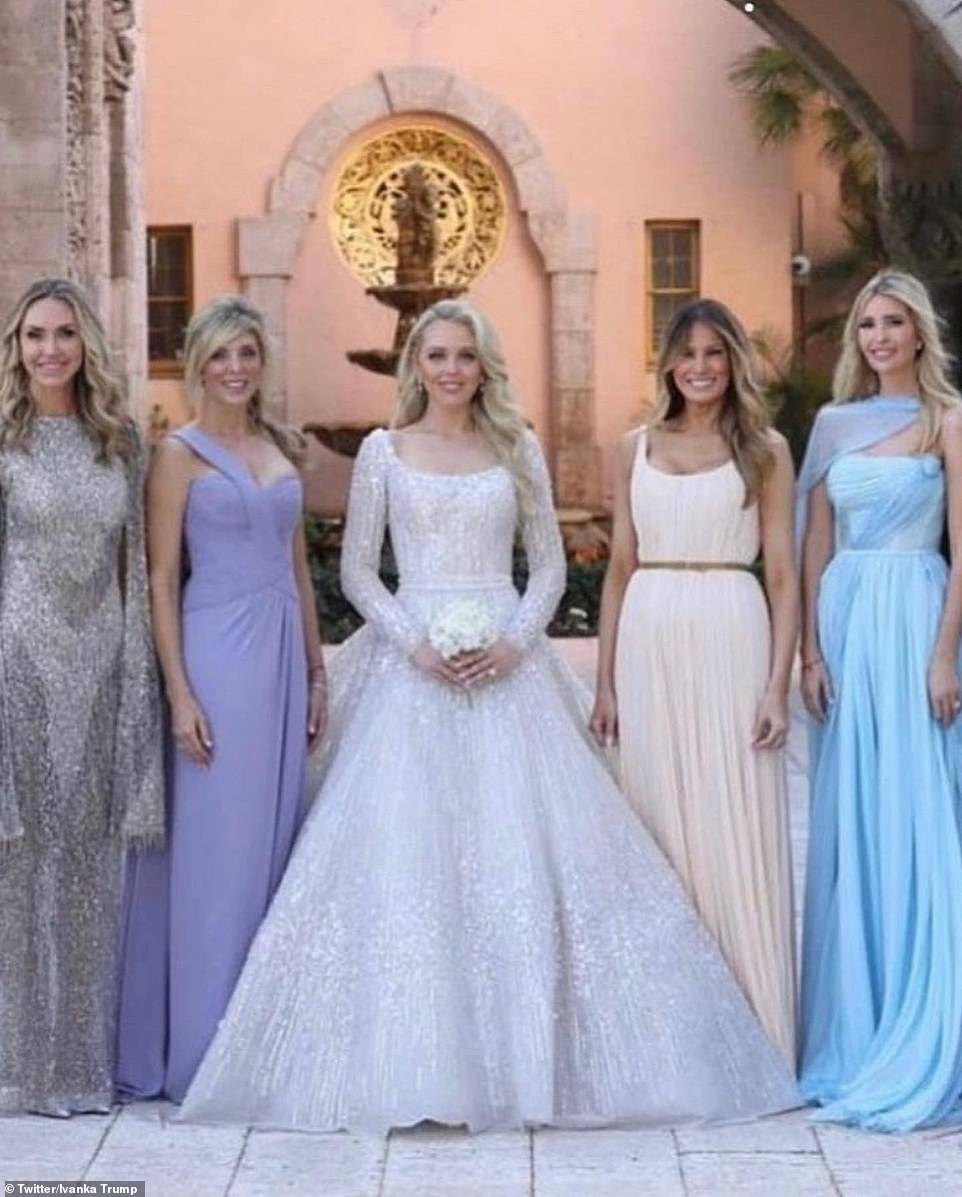 Ivanka’s original post: The former First Daughter shared a cropped photo on Twitter, with the black-wearing Guilfoyle cropped out, but four hours later she shared the original image on her Instagram story with a love emoji

Ivanka’s light blue dress was a replica of the gown Grace Kelly wore in the 1955 film To Catch a Thief – a parallel that raised eyebrows, given Donald Trump‘s current legal battles, and his claims of the 2020 election being stolen.

Ivanka shared photos of Tiffany’s big day at Mar-a-Lago, with their father Donald Trump walking his daughter down the aisle beneath a pastel-hued floral arch, and with the pastel-wearing bridal party – with one photo in particular drew attention.

Tiffany, in her sparkling Elie Saab gown, was in the center with her mother Marla Maples dressed in mauve on her right, next to her sister-in-law Lara Trump in a gold sparkly dress.

To Tiffany’s left was her stepmother Melania Trump, in a gold-hued gown, and Ivanka in her baby blue dress. Next to Ivanka was Guilfoyle, all in black.

Don Jr., 44, brought fiancée Kimberly Guilfoyle, 53, to his younger sister’s wedding with the family appearing in high spirits – though experts claimed her choice of color could have been considered a gaffe.

‘In many instances, especially here in the United States, wearing black to a wedding has been seen as a fashion faux pas because typically the color black is associated with mourning,’ said wedding etiquette expert Elaine Swann, in an interview with Brides magazine last year.

But, she added, the color was gaining acceptance among modern brides.

Swann added: ‘It is absolutely acceptable for a female to wear a black dress to a wedding. Always avoid wearing anything that’s too low cut, too short, or too tight.’ 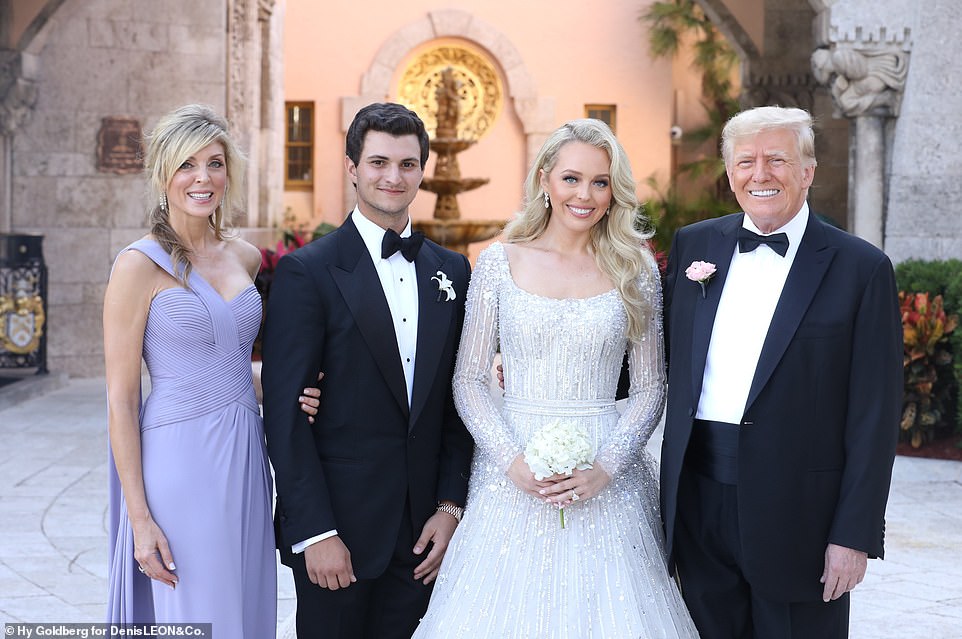 The family had all gathered to watch as Tiffany, 29, said ‘I do,’ to 25-year-old billionaire Michael Boulos. The happy couple are pictured here with Tiffany’s mother, Marla Maples, who donned a lavender Elie Saab gown, and her father, former President Donald Trump 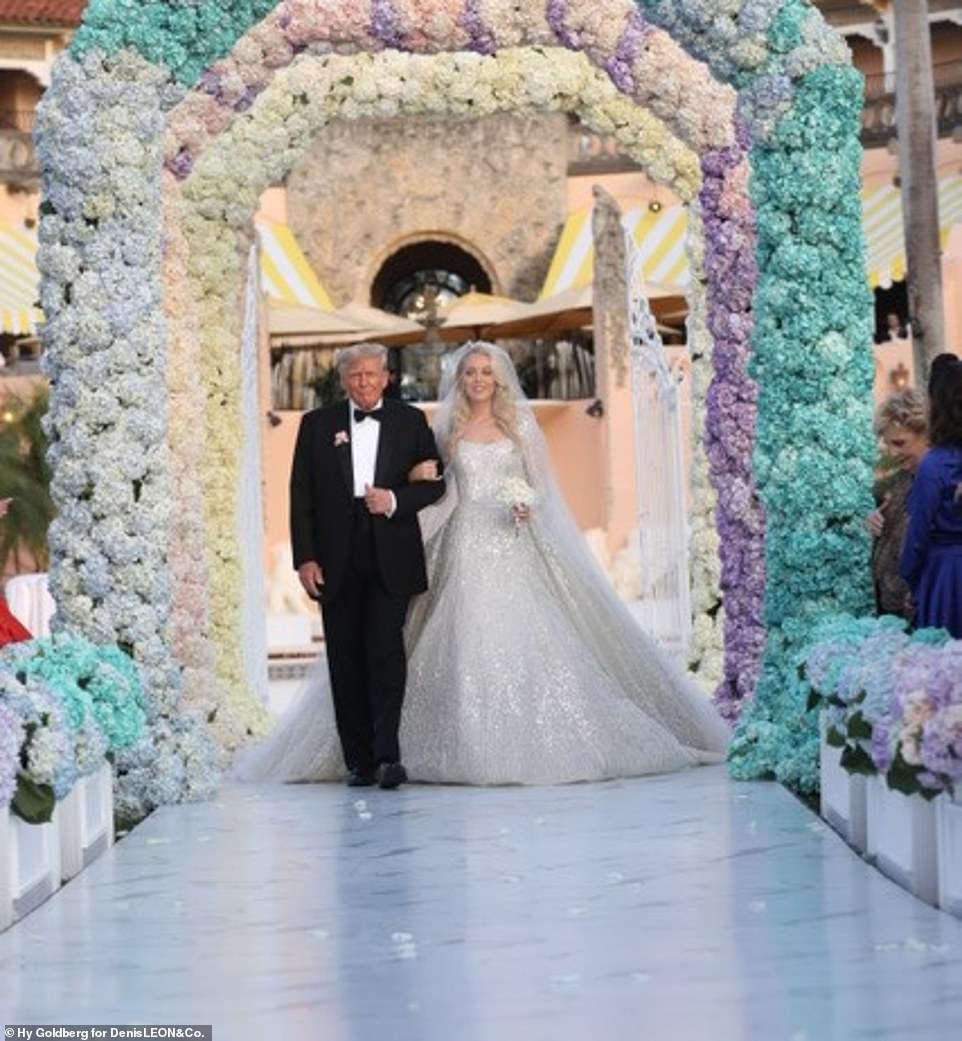 Trump smiled as he walked his daughter down the aisle on her big day, with Tiffany looking radiant in her Elie Saab gown 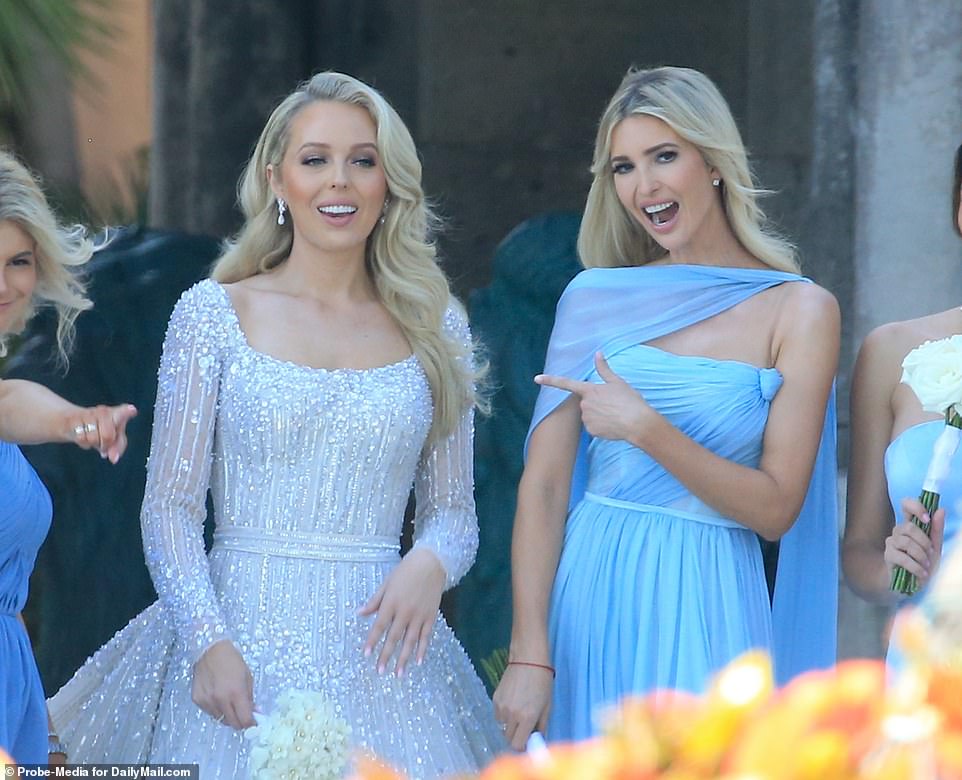 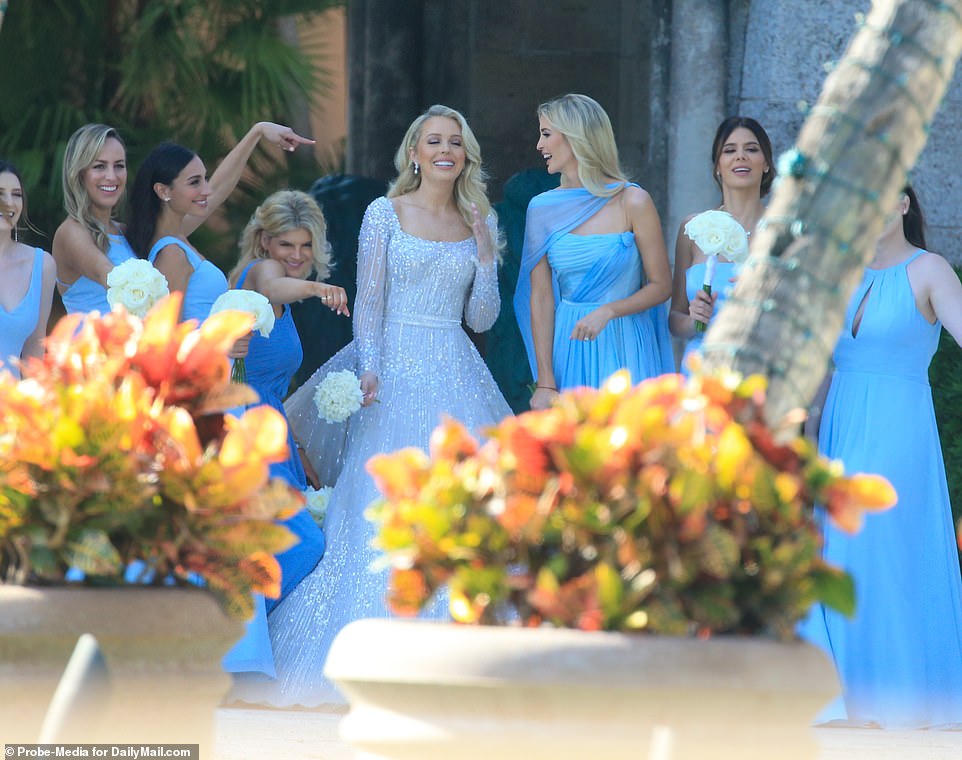 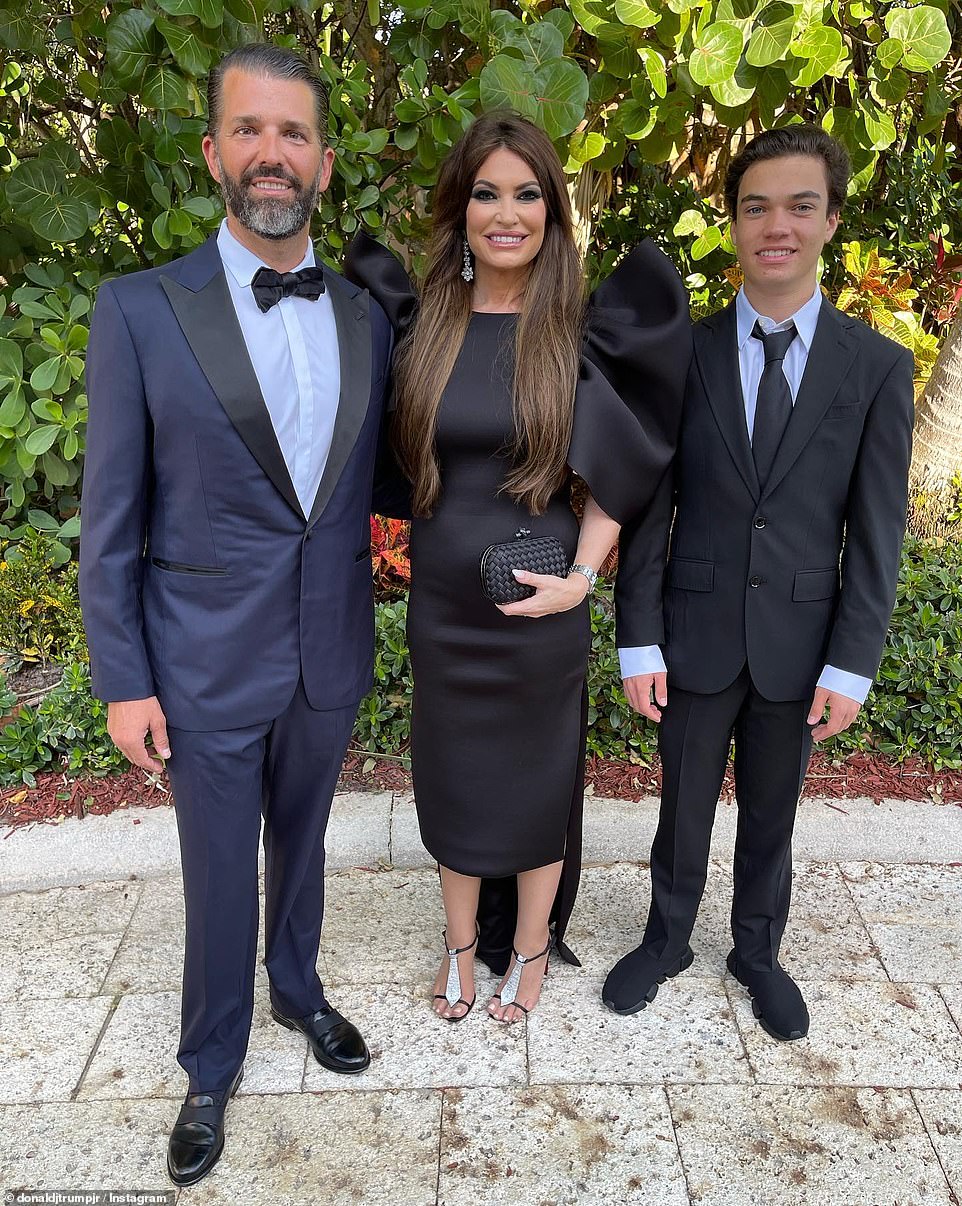 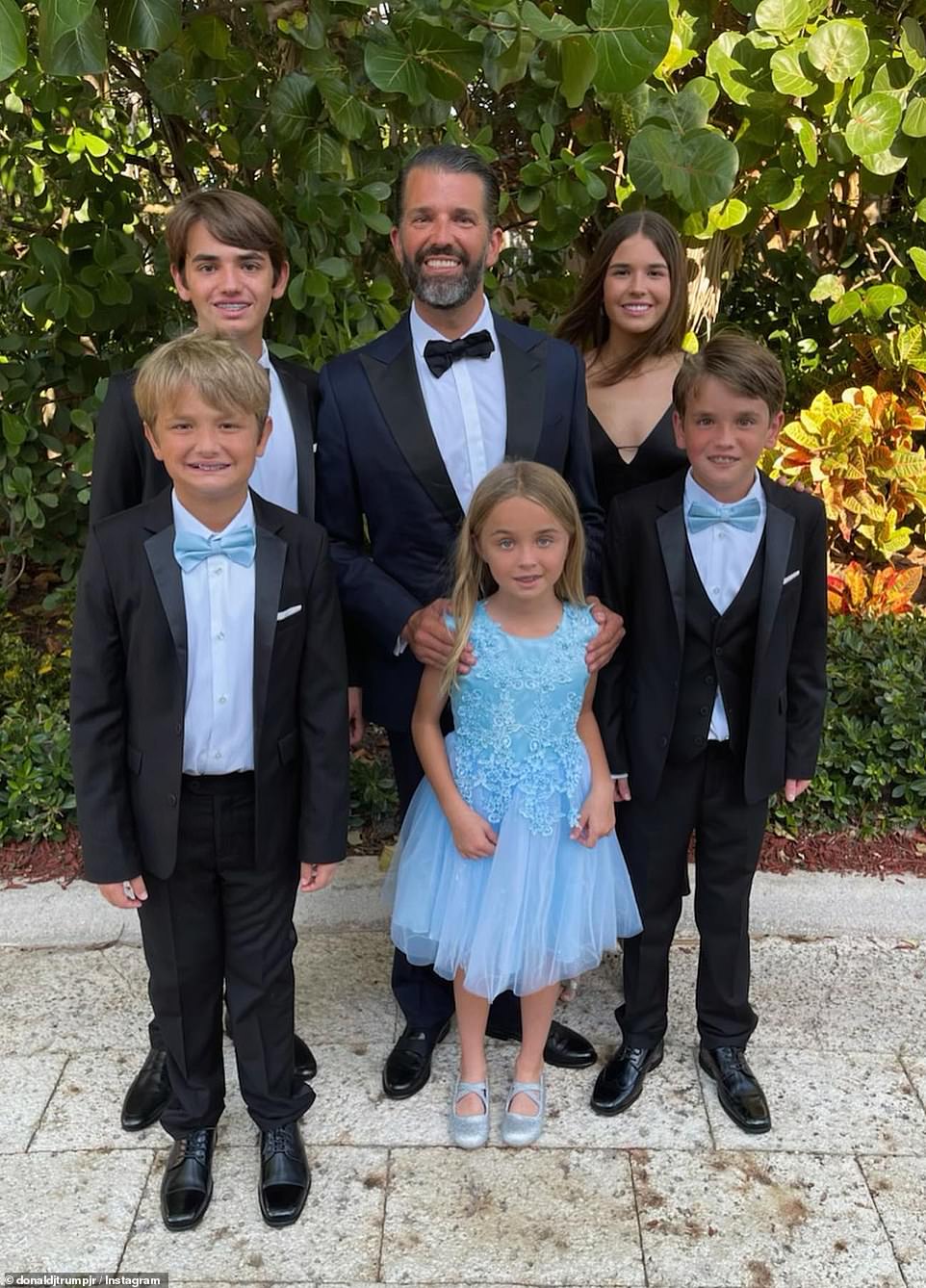 Don Jr posted that all five of his children with ex-wife, Vanessa, behaved themselves at the extravagant wedding

It is not known whether Tiffany asked her guests to wear pastel colors. Swann said if a bride made such a request, it should be strictly adhered to.

Both Ivanka Trump and her husband Jared Kushner and Guilfoyle and Don Jr. live in Florida, with their homes only 80 miles apart.

Ivanka and Kushner are building a home in Indian Creek near Miami; Trump Jr and Guilfoyle bought a $9.7 million home in Jupiter, north of West Palm Beach.

Ivanka and her husband are said to be ‘done’ with Washington DC, and have no intention of returning to the White House if Trump runs again and wins.

Guilfoyle and Trump Jr, on the other hand, remain extremely active on the campaign scene and are believed to be encouraging Trump to go for a second term.

The women also have very different style: Ivanka is diplomatic and reticent, while Guilfoyle, famed for her eyebrow-raising speeches, is flamboyant and outspoken.

It is unclear whether they were seated near each other at the wedding.

The Unexposed Secret of Essay Writing