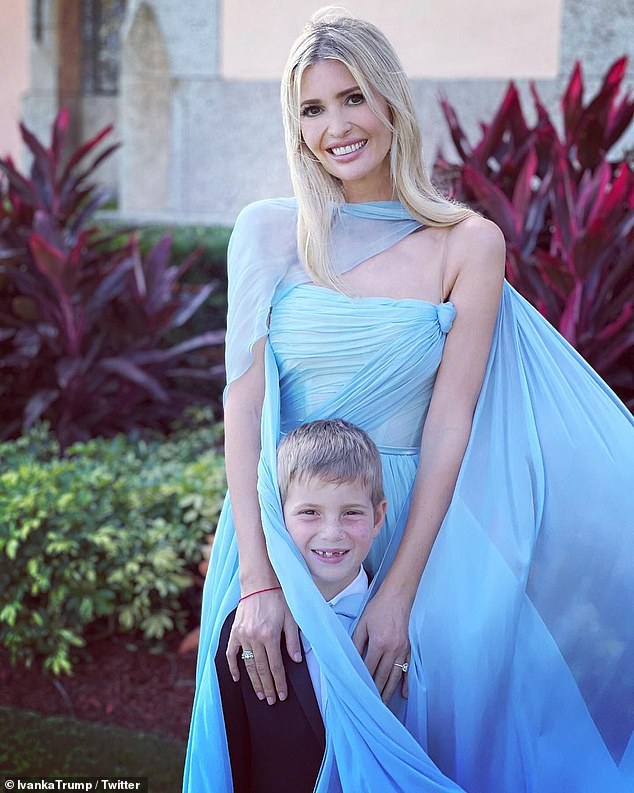 Ivanka Trump said she won’t be involved in former President Donald Trump’s 2024 run for the White House, expressing in a Tuesday night statement that she plans to focus on her children, as husband Jared Kushner attended the Mar-a-Lago launch.

‘I love my father very much. This time around, I’m choosing to prioritize my young children and the private life we are creating as a family,’ the former White House adviser said. ‘While I will always love and support my father, going forward I will do so outside the political arena.’

Ivanka was noticeably absent as Trump called attention to the other family members in the room including wife, former First Lady Melania Trump and his middle son Eric.

Donald Trump Jr. missed the speech due to a flight hiccup as he was returning to Florida from a hunting trip.

Ivanka Trump and her son Theodore pose for a picture at sister Tiffany’s wedding on Saturday. The former first daughter and White House aide sent out a statement Tuesday night saying she wouldn’t be involved in her father’s 2024 campaign 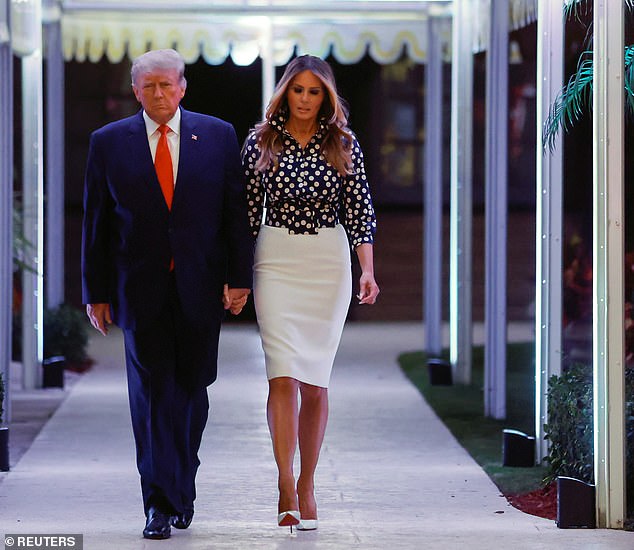 In his stately ballroom with opulent gold trimmings and chandeliers and in front of wife Melania and members of his family, he was introduced as the ‘next president’ to chants to ‘USA’ 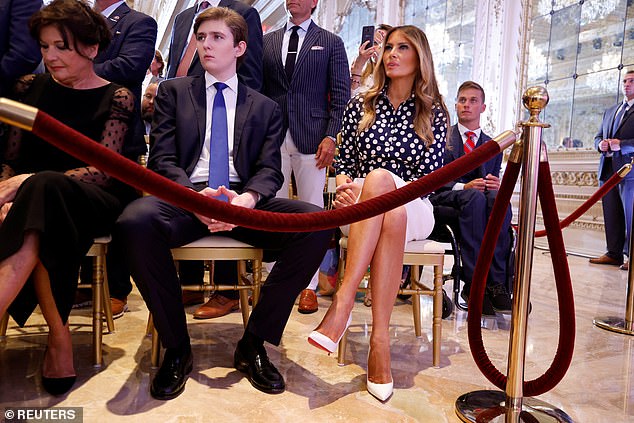 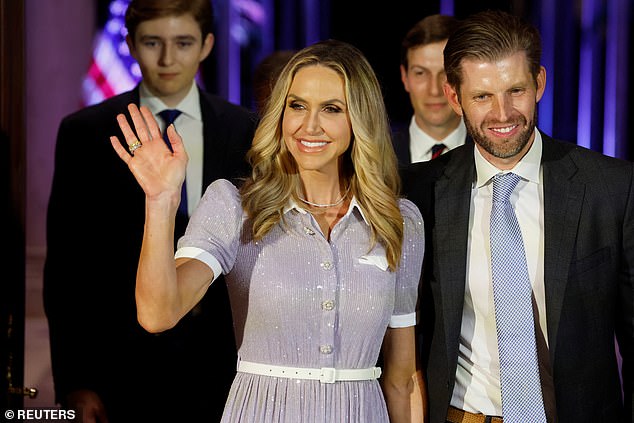 Lara Trump (left) waves as she enters Mar-a-Lago alongside husband Eric (right), followed by Barron Trump (back left) and Jared Kushner (back right) 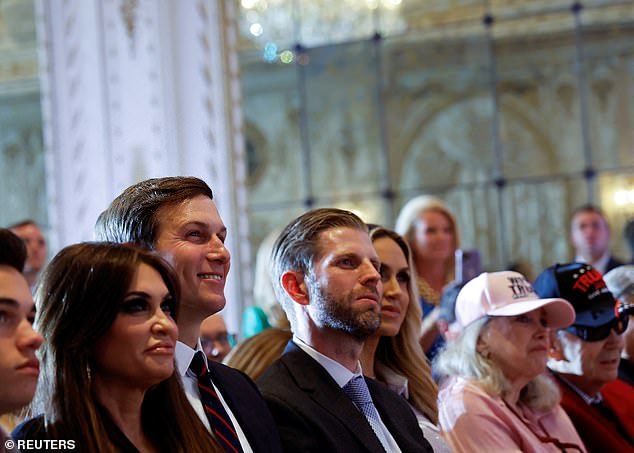 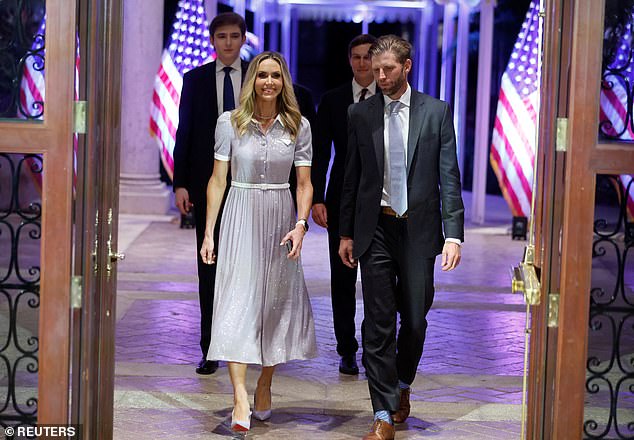 Tiffany Trump, who celebrated her nuptials at the Palm Beach resort on Saturday, also missed the festivities.

Trump spoke for just over an hour and as he concluded his remarks he name-dropped Eric and Melania.

‘In fact, my one boy – stand up Eric – I think he got more subpoenas than any man in our country,’ the ex-president said after a long riff about the politization of the Justice Department.

He added that he believed Eric Trump had a ‘PHD in subpoenas.’

Trump then turned his attention to his wife.

‘It hasn’t been a joyride for our great first lady either,’ the Republican said. ‘I go home and she says “you look angry and upset.”‘

‘But she’s been a great first lady and people love her,’ he added.

Trump gathered his family and the MAGA faithful in Mar-a-Lago’s grand ballroom to announce his 2024 effort.

The former president ignored Republican critics and those who blamed him for the GOP‘s disappointing midterms to go full steam on stating his intent to be back in the Oval Office to ‘drain the swamp’ with the country ‘being destroyed before our very lives’.

‘In order to make America great and glorious again, I am today announcing my candidacy for president of the United States,’ he confirmed to huge cheers before laying into the FBI raid, the ‘fake’ dossier’, the ‘deep state’ and lobbyists.

‘Three years ago when I left office, the United States stood ready for its golden age. Our nation was at the pinnacle of power, prosperity and prestige – towering above all rivals vanquishing all enemies and striding into the future confident, resourceful,’ Trump said.

He vowed to make his run about working people, restoring American energy independence, reforming elections to make sure there are ‘only paper ballots’ and restoring an ‘agenda of greatness’ with top Republicans and the media saying he should stay out of the race.

‘This will not be my campaign. This will be our campaign all together. Because the only force strong enough to defeat the massive corruption we are up against is you, the American people,’ he said while celebrating the last six years of the MAGA movement, his midterm endorsements and his battle against Washington.

After months of speculation and with mounting legal battles, he filed paperwork with the Federal Election Commission just moments before he began his speech to fired-up supporters at Mar-a-Lago where he said America ‘can’t take’ four more years of Biden.

Speaking for just over an hour, Trump made defiant and sometimes somber remarks about the state of the country, hours after Mitch McConnell said independent voters  had the ‘impression of many of the people in our party and leadership roles is that they are involved in chaos’.

The former president went on to attack Biden for record inflation, ‘falling asleep at global conferences’ and making the U.S. ‘detestable’ with the rest of the world.

He celebrated House Speaker Nancy Pelosi getting ‘fired’ with Republicans on the cusp of taking the House majority.

But taking a page out of his White House successor’s 2020 playbook, Trump vowed to ‘unify people’ and claimed he did so during his last term.

‘It happened in the previous administration,’ Trump said. ‘And what was bringing them together was success.’

Trump said Afghanistan was the most ’embarrassing moment in the history of our country’ and tore into the Biden administration border policies that have led to an ‘invasion’ and fentanyl ‘pouring’ into our country.

‘The only force strong enough to defeat the massive corruption we are up against it’s you, the American people’, he went on. ‘It’s not about politics, it’s about love for this great nation’.

In a line he has used before, he told the audience: ‘I didn’t need this. I had an easy life’.

‘This is something I didn’t need, and a lot of you people don’t need either, but we have to take care of our country. We love our country, we need to save our country,’ the former president said.

Big Brother Australia: Dave Graham reveals why he voted himself off the show