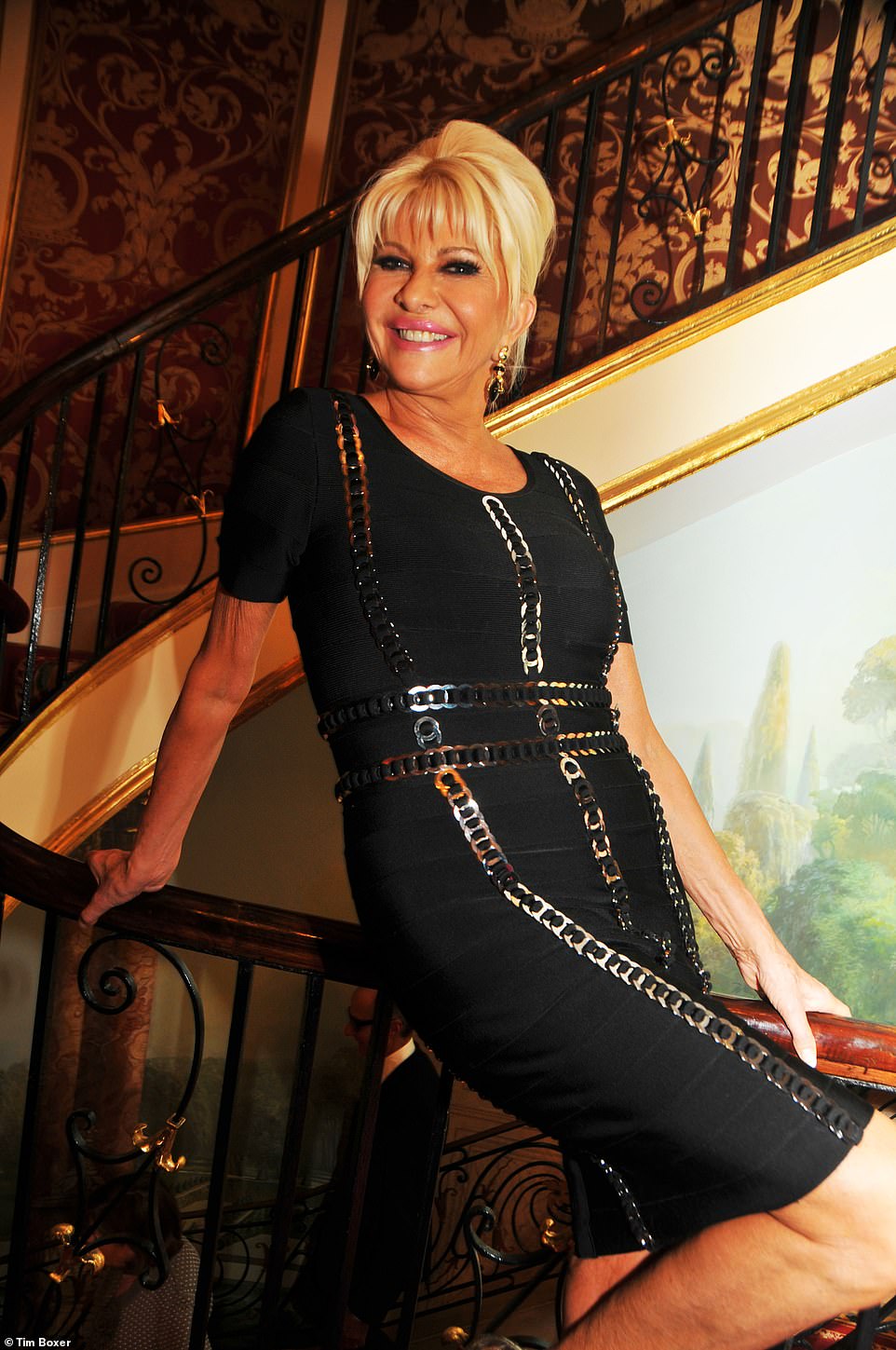 Ivana Trump’s New York City townhouse is on the market for $26.5 million just four months after she was found dead at the bottom of the opulent winding staircase of the lavish property.

Proceeds from the sale of the 8,725-square-foot home on 10 East 64th Street in Manhattan are set to be split between Ivana’s three children: Donald Trump Jr., Eric Trump and, Ivanka Trump.

Ivana bought the Upper East Side townhouse for $2.5 million in 1992, the same year her divorce was finalized from former President Donald Trump.

Following news of the listing reported by The Wall Street Journal, one prominent broker noted that the home is ‘overpriced’ and would need a ‘total renovation.’

Ivana was found at the bottom the stairs of the home in July with blunt impact injuries to her torso. The 73-year-old’s death was ruled an accident.

Ivana Trump is seen in 2011 on the winding staircase of her Manhattan townhouse, that has been listed for sale for $26.5 million. She died in July after an accidental fall down the stairs in the home 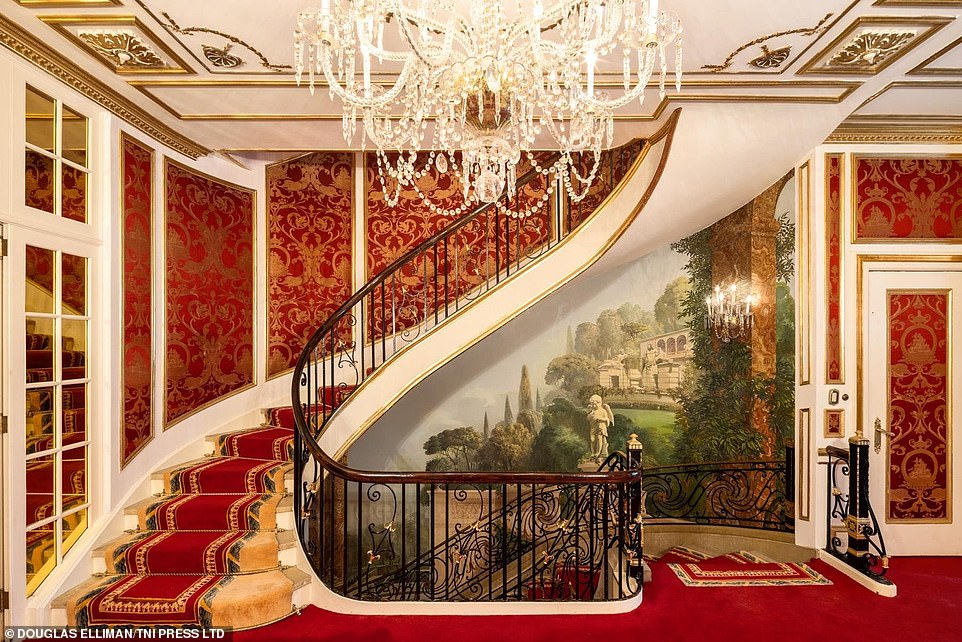 The lavish townhouse features a winding staircase, which is covered in thick dark red carpeting, a formal parlor with a large Italian crystal chandelier, surrounded by gilded custom-paneling and ceiling heights of more than 10.5 feet 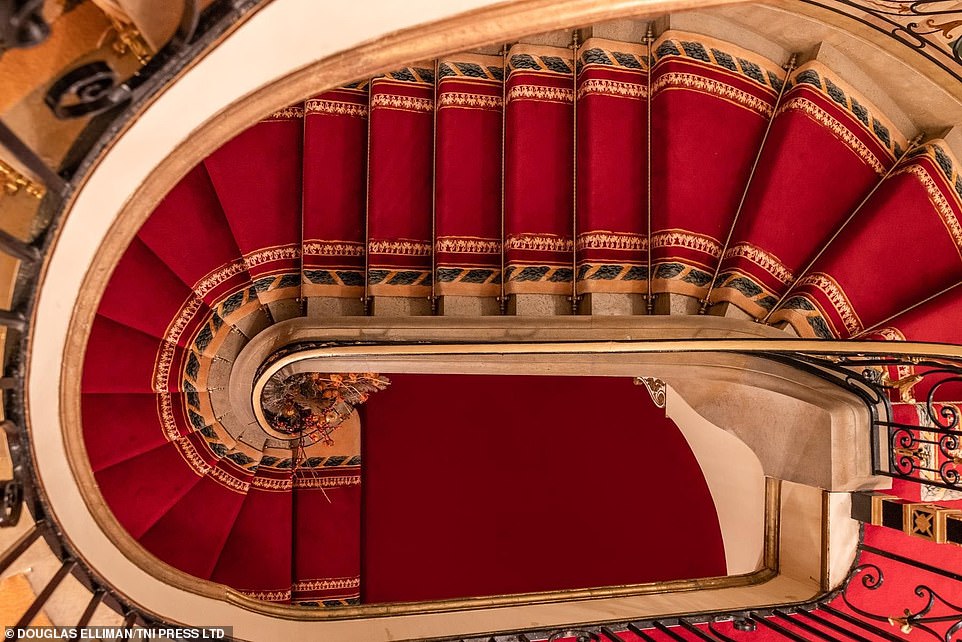 The winding staircase is shown making twists and turns through the six-story townhouse, where Ivana was found dead in July 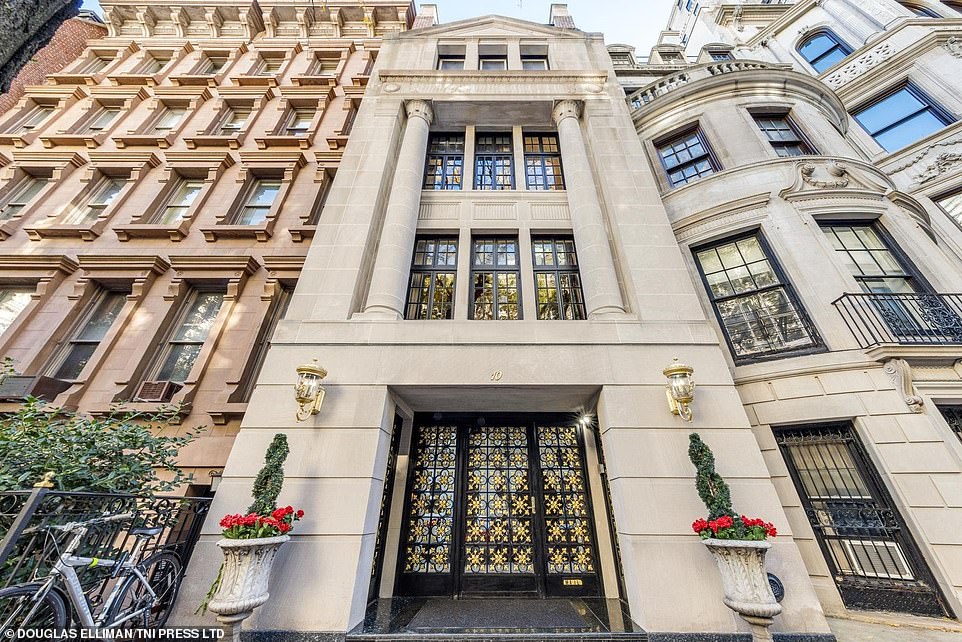 Proceeds from the sale of the 8,725-square-foot home on 10 East 64th Street in Manhattan are set to be split between Ivana’s three children: Donald Trump Jr., Eric Trump and Ivanka Trump. Ivana was found dead at the bottom of a staircase in the home 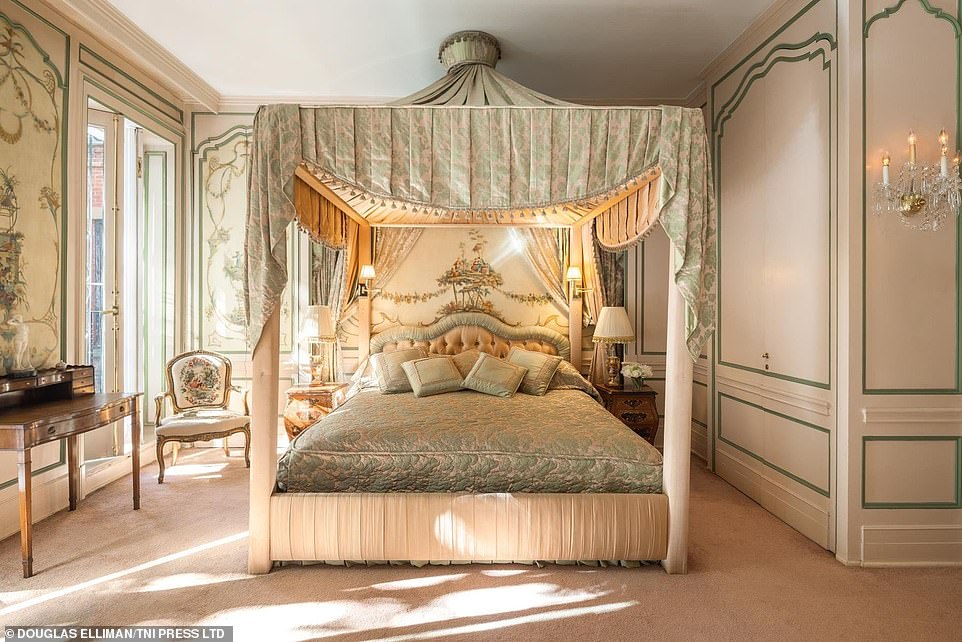 The primary bedroom has a private terrace accessed through three sets of charming French doors.The lavish townhouse has five bedrooms, one of which has an ornate canopy bed 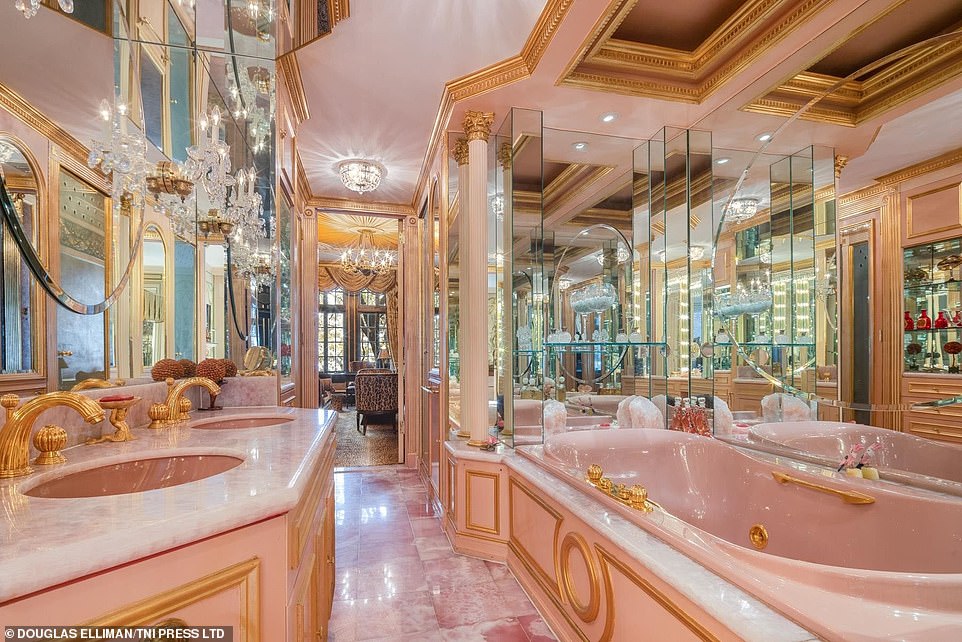 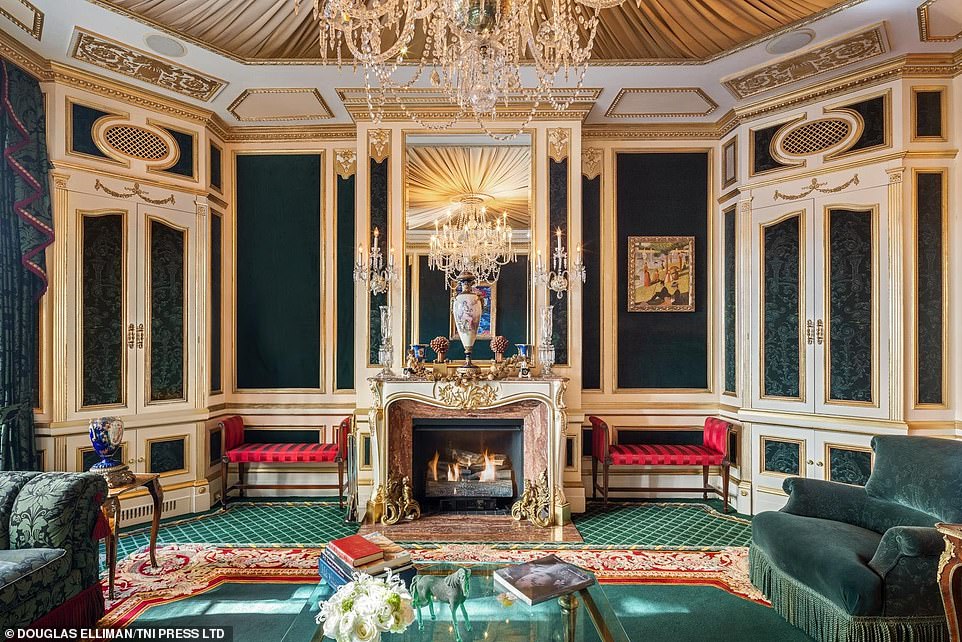 The décor of the townhouse is like stepping back into the 1980s, with gold fixtures and ornate molding throughout the home 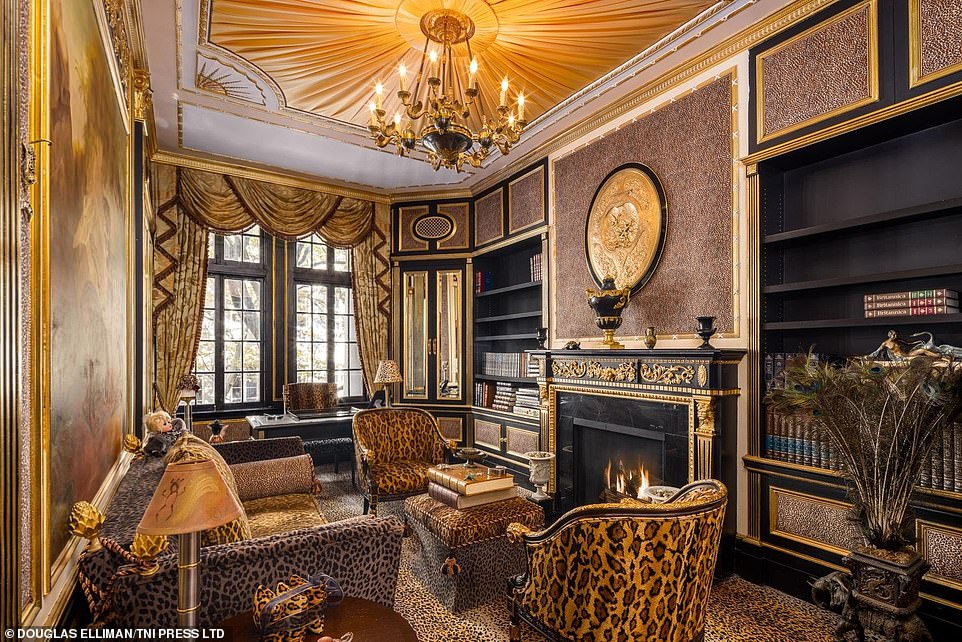 The Upper East Side limestone home, which is listed with Adam Modlin of the Modlin Group and Roger Erickson of Douglas Elliman, has five bedrooms but could be renovated for more, the agents said.

Two of the floors are divided into several rooms, but the agents said those spaces could be combined to take advantage of the full width of the 20-foot-wide townhouse.

The agents also noted that the new owners will want to do a significant renovation, which echoes a broker’s sentiment that a renovation is needed.

While Ivana’s children are asking for the full $26.5 million for the regal townhouse, an Upper East Side broker predicted it’ll sell for a lot less.

‘It needs a total renovation,’ according to Curbed. ‘I think it will sell for $17 million or $18 million,’ adding that isn’t so radically overpriced that it will scare off serious buyers.

The décor of the townhouse is like stepping back into the 1980s, the Journal reported, with gold fixtures throughout the home, some of which is decked out in leopard print, pink marble, crimson carpet and a trompe-l’oeil Renaissance garden on the sweeping, curved staircase in the entryway.

There is a Versailles-inspired dining room that features a floor-to-ceiling window overlooking the interior private courtyard, according to the listing. 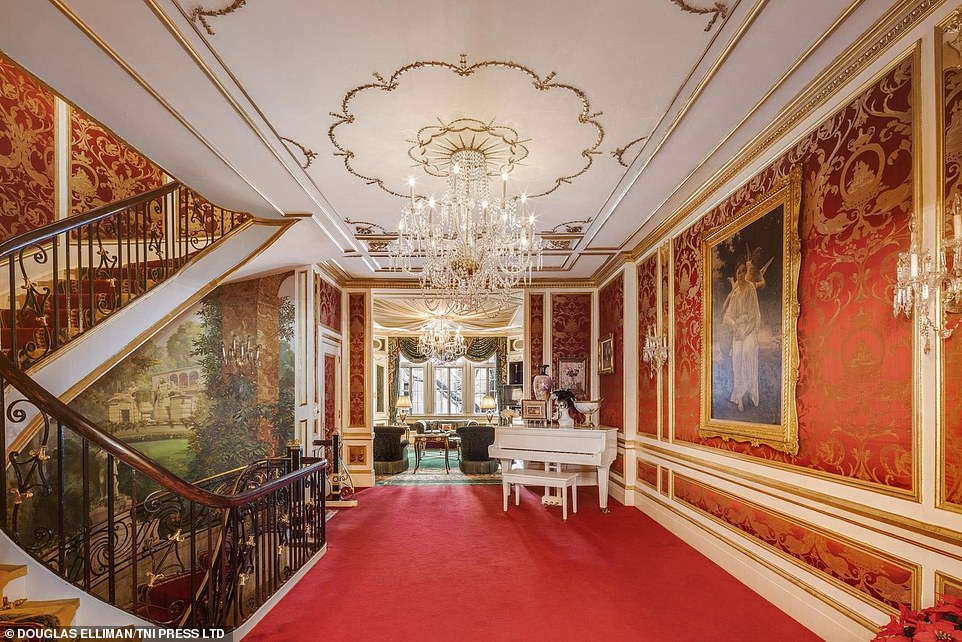 The Upper East Side home, which is listed with the Modlin Group and Douglas Elliman, has five bedrooms but could be renovated for more, agents said. Pictured is the formal gallery with a large, Italian crystal chandelier and baby grand piano 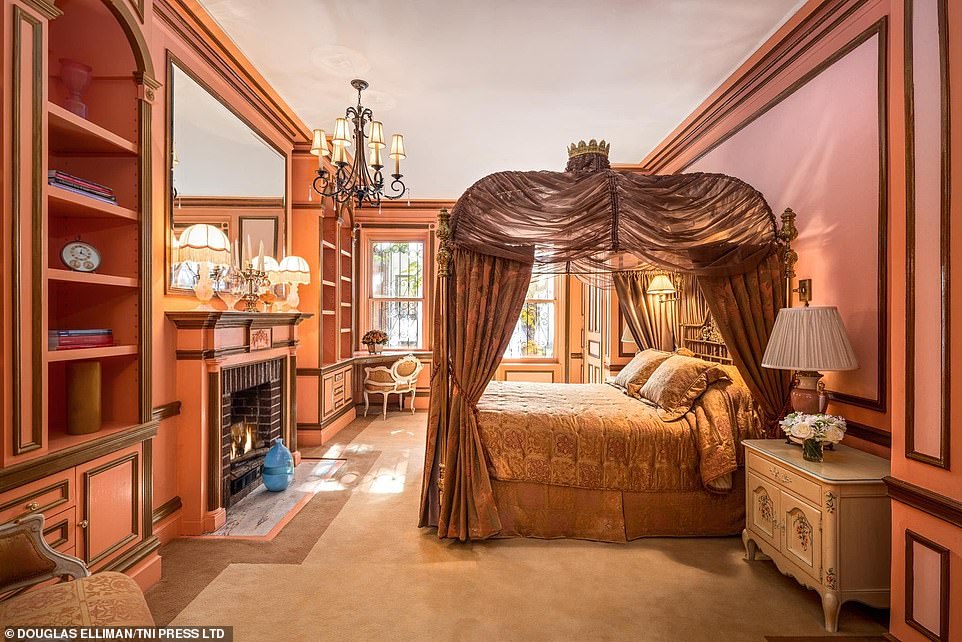 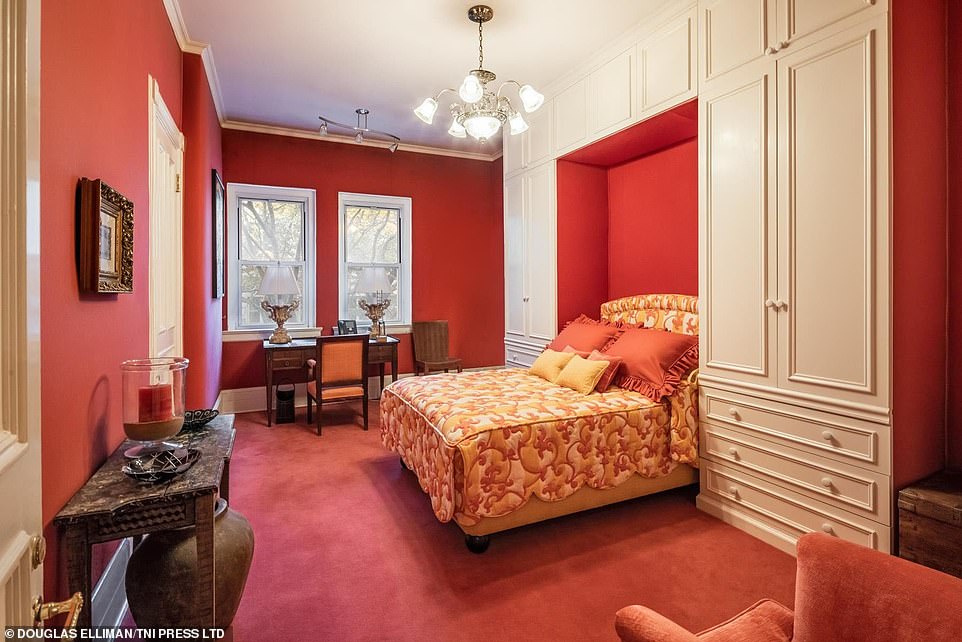 Another view of one of the five bedrooms inside the residence, a smaller space but with ample closet and storage 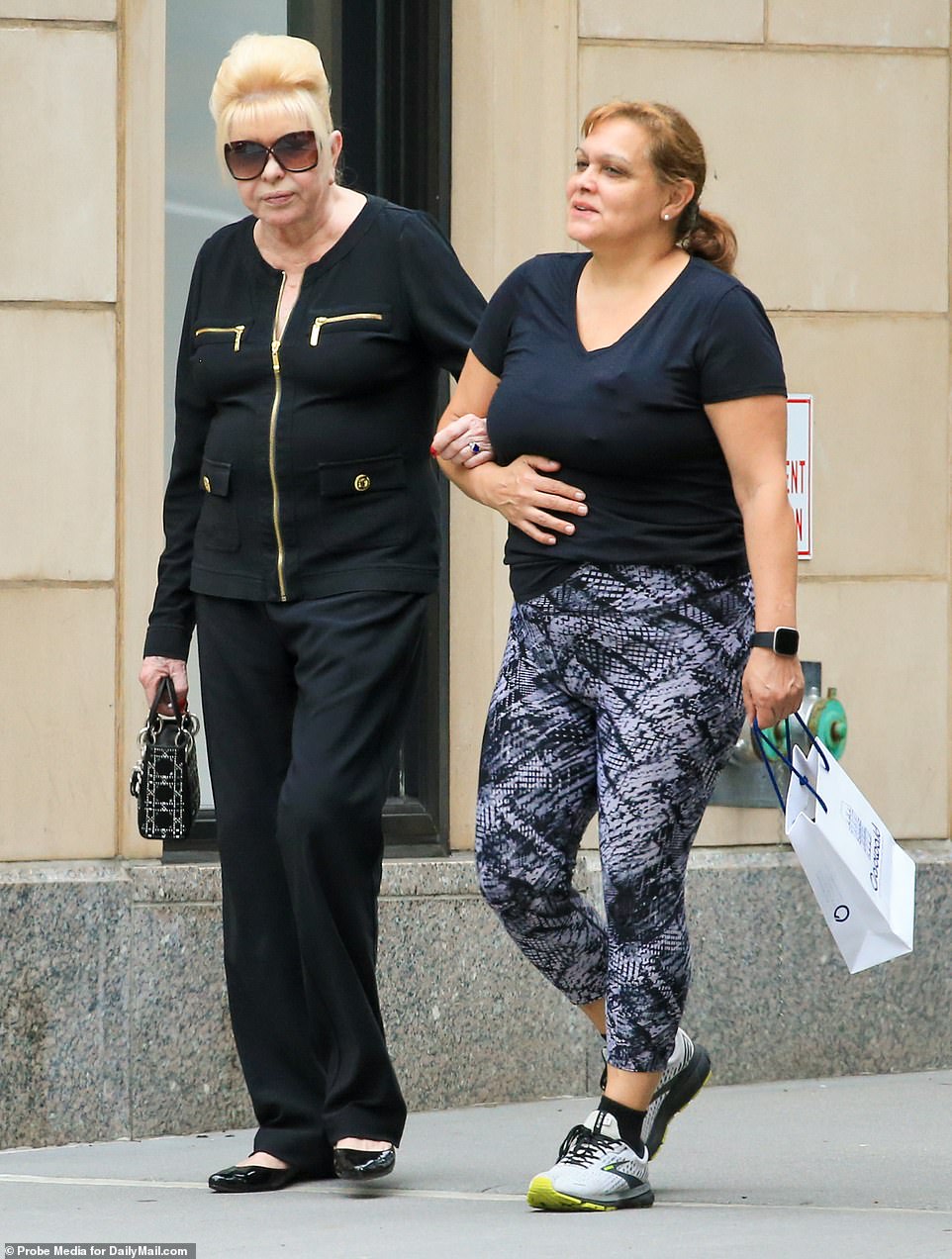 Ivana passed away at the age of 73 after being found ‘unconscious and unresponsive’ at the bottom of the stairs in her home’. She was last pictured (above) on June 22 in New York City

The Journal reported that Eric Trump once said that his mother had plans drawn up for a pool to be built in the basement, but changed her mind. The basement already includes a contemporary Swedish sauna.

There is also a media room on the first floor with an adjacent kitchen and home office, as well as a garden and a huge basement with a laundry room and ample storage.

Ivana’s death earlier this summer sent shockwaves through the Trump family, with son Eric Trump saying as he left Ivana’s townhouse that it was ‘a very sad day, a very sad day.’

The New York City medical examiner’s office said that Ivana died accidentally from blunt impact injuries to her torso in an apparent fall.

Ivana had grown increasingly frail during more than two years of isolation during the COVID-19 pandemic, friends say, and the socialite’s close confidante Nikki Haskell says she had feared an accident on the stairs. 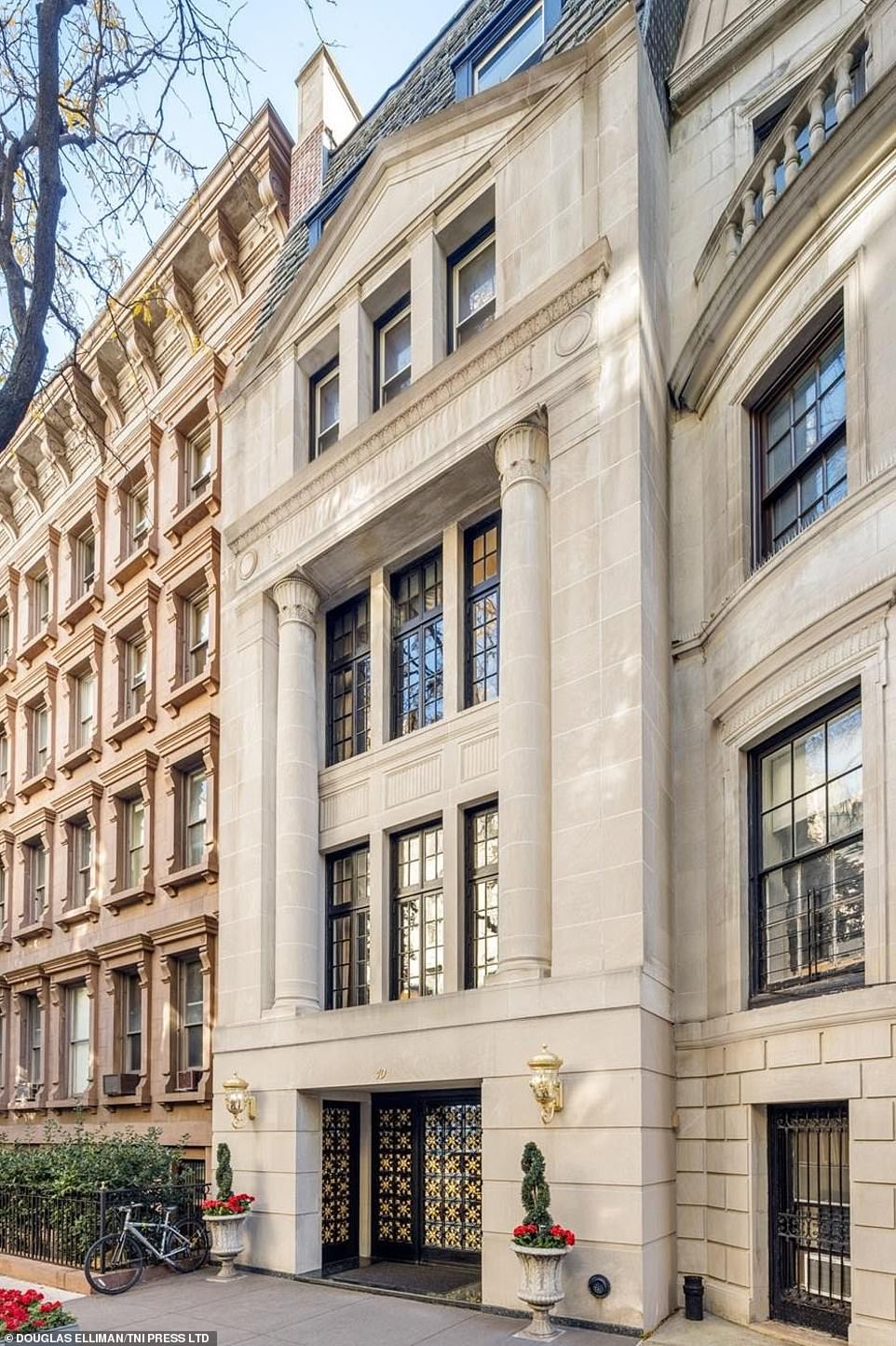 While Ivana’s children are asking for the full $26.5 million, an Upper East Side broker predicted it’ll sell for a lot less 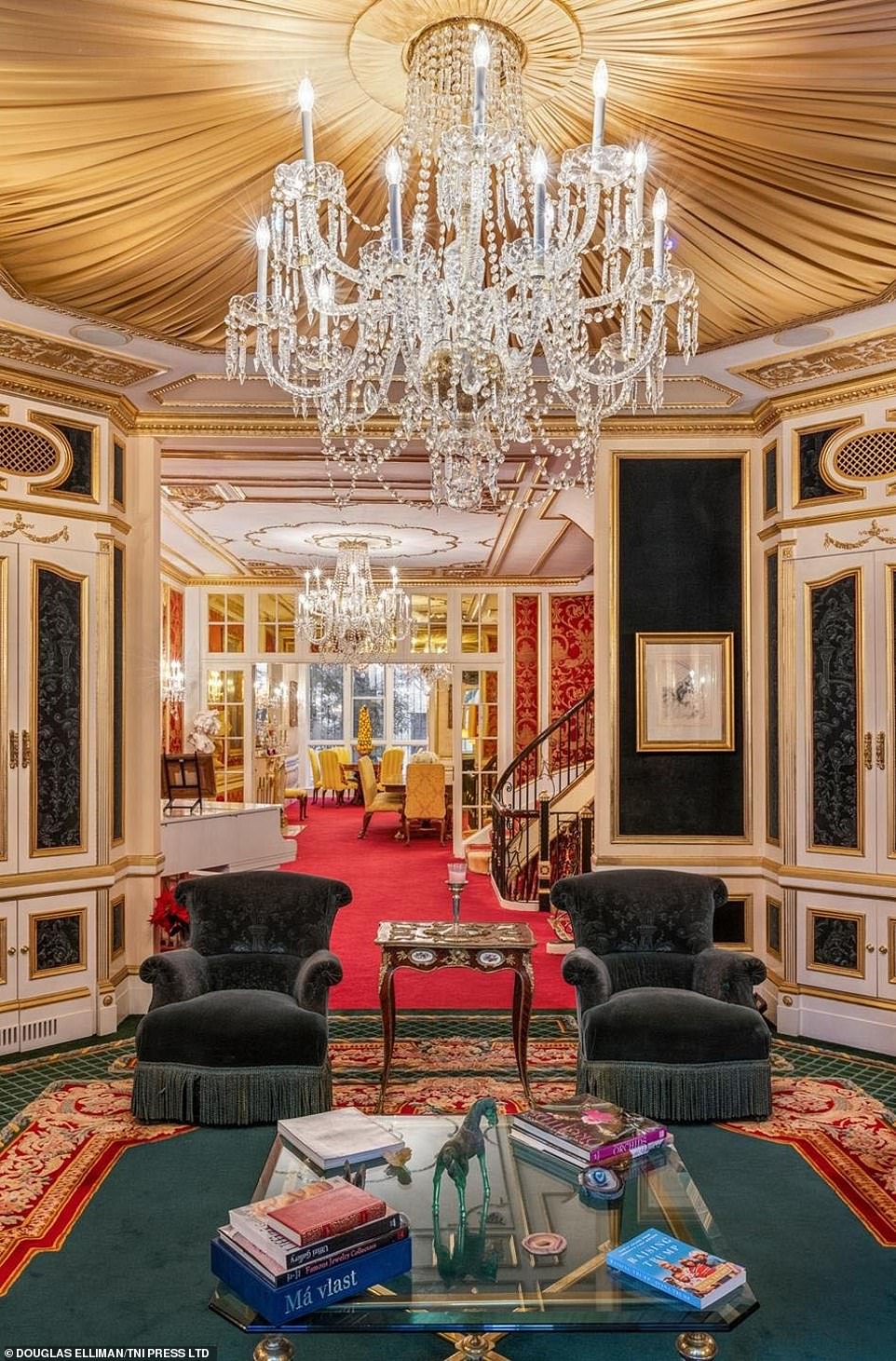 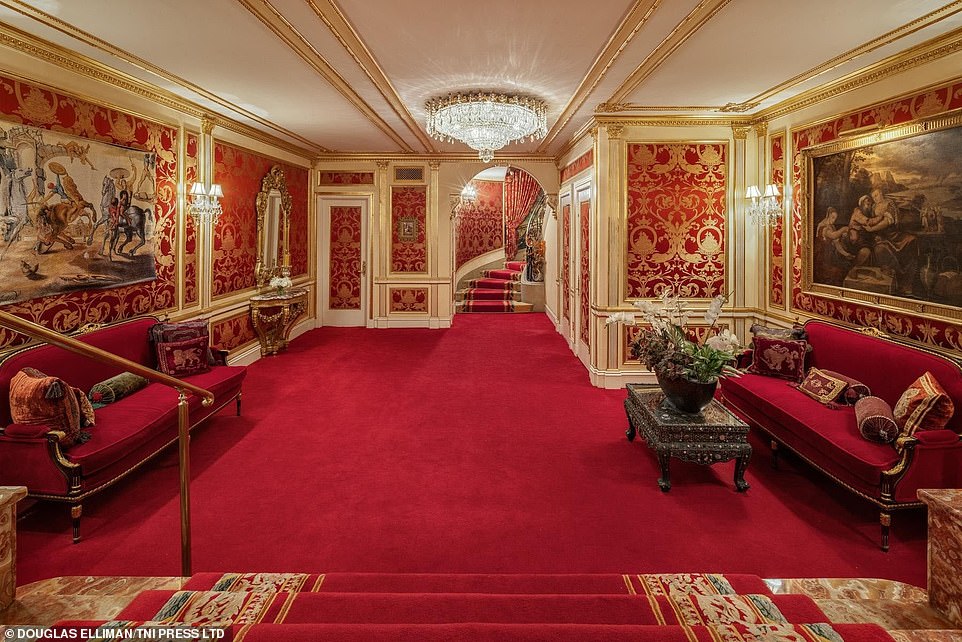 Thick crimson carpet covers one of the floors of the apartment, which is now listed for sale for $26.5 million 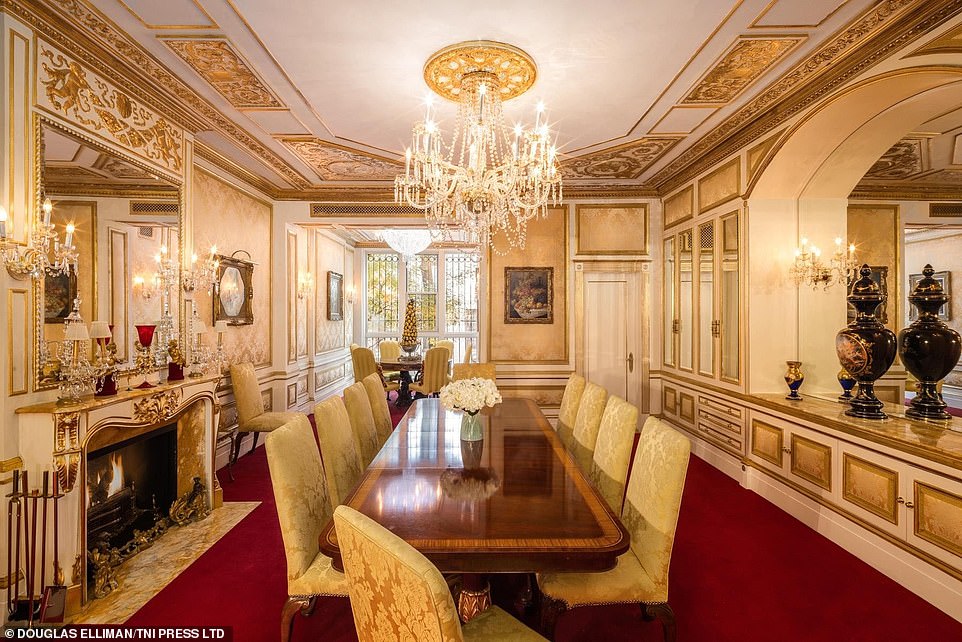 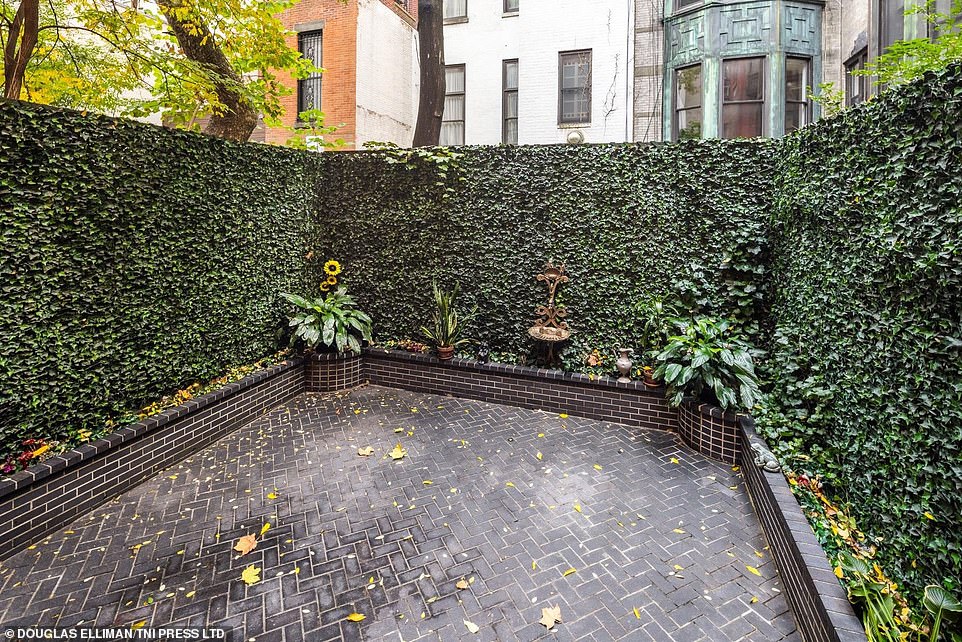 The six story residence features an additional 700 square feet of outdoor space, including a garden with tall hedges 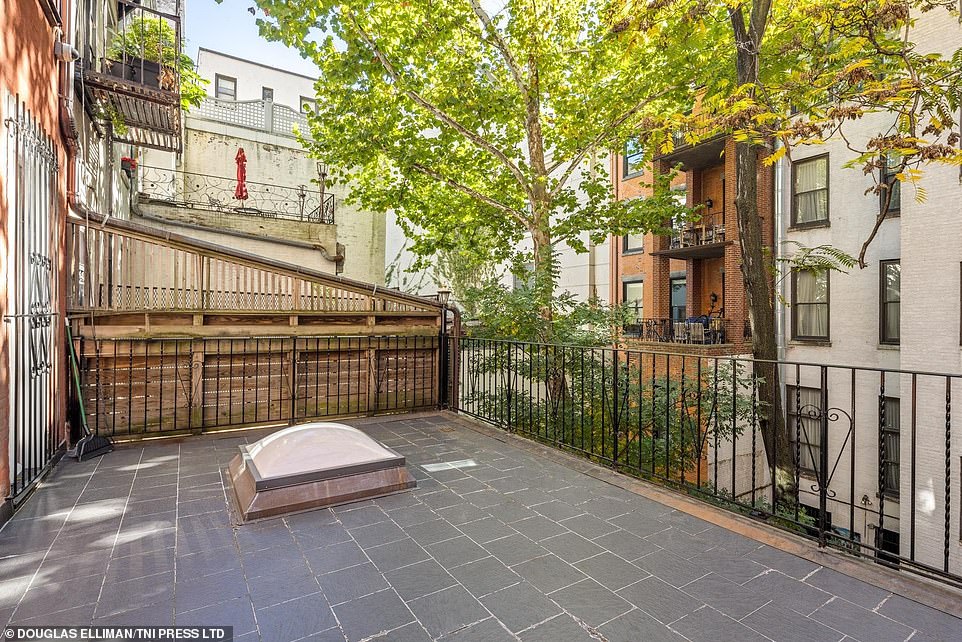 ‘I have to tell you something — that has always been my fear. She had one of those really beautiful staircases that was impossible to walk down,’ Haskell told Extra back in July.

‘Narrow in the inside and wider as it got out. I was always afraid that she would fall. I don’t know what happened, but it’s not hard for me to believe that’s what happened — treacherous stairs,’ added Haskell.

She was last seen alive when she ventured out to her favorite neighborhood restaurant, just a few doors down from her home.

Around 6pm, Trump and her health aide stopped in Alesti on East 64th Street, where the socialite ordered soup to be delivered to her home, the New York Post reported.

Ivana was very popular with local businesses, and had been due to have her hair styled at 2pm on the day of her death. Staff there said she appeared in decent health, and was looking forward to an upcoming trip to St Tropez. 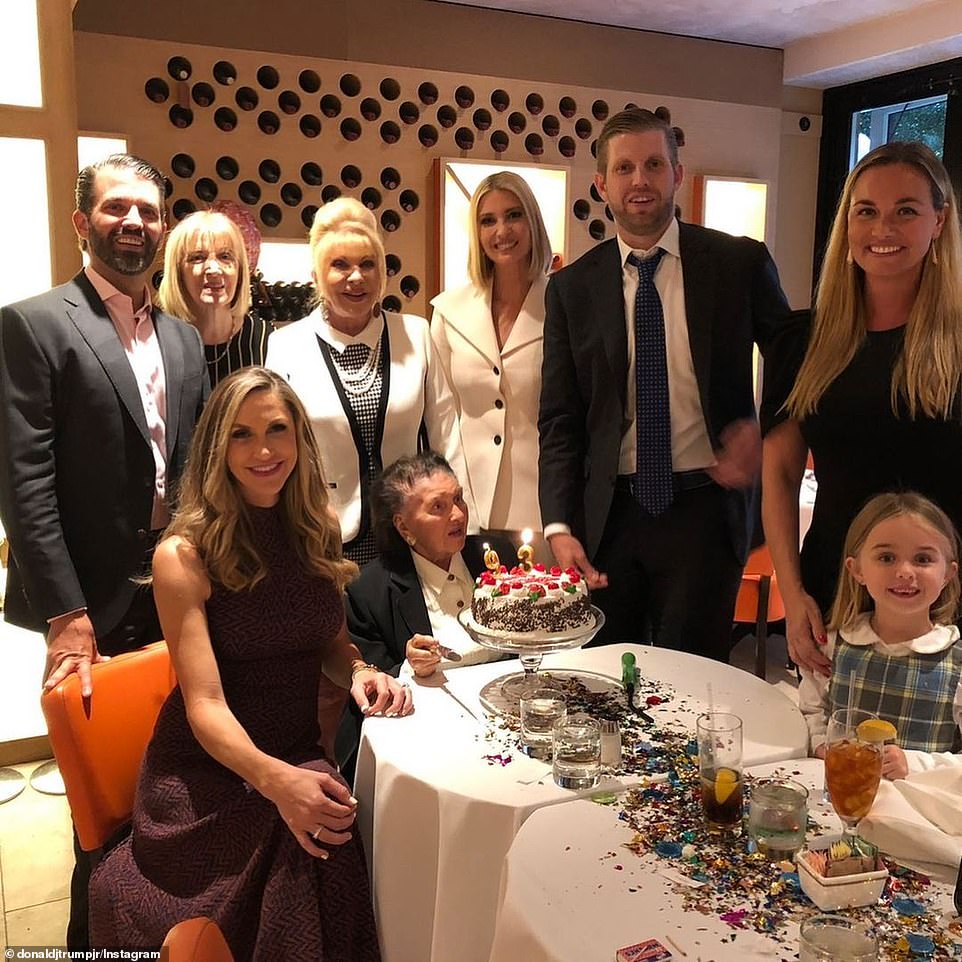 Ivana is seen with her children, her mother Marie Zelnickova, and other family members on Mother’s Day 2021. Proceeds from the sale of her Upper East Side home are set to be split between Donald Trump Jr., Eric Trump and, Ivanka Trump 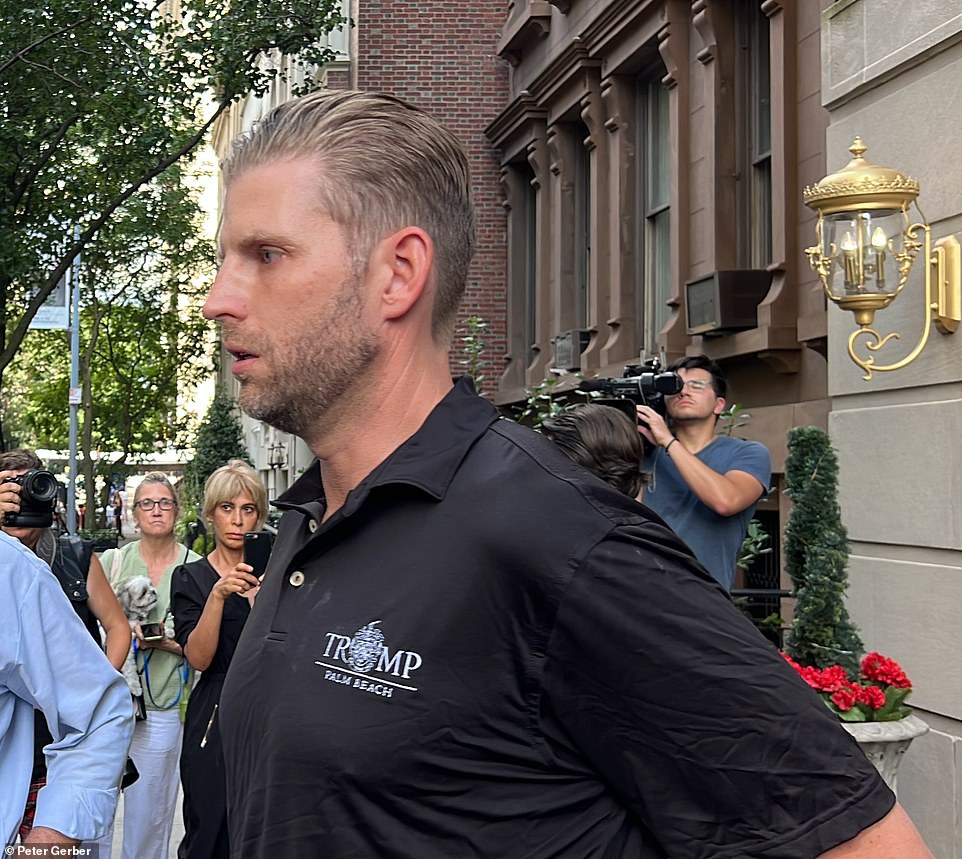 Ivana’s youngest child Eric, 38, was seen outside his mother’s New York home shortly after the news of her death broke. He praised her as an ‘incredible woman’ 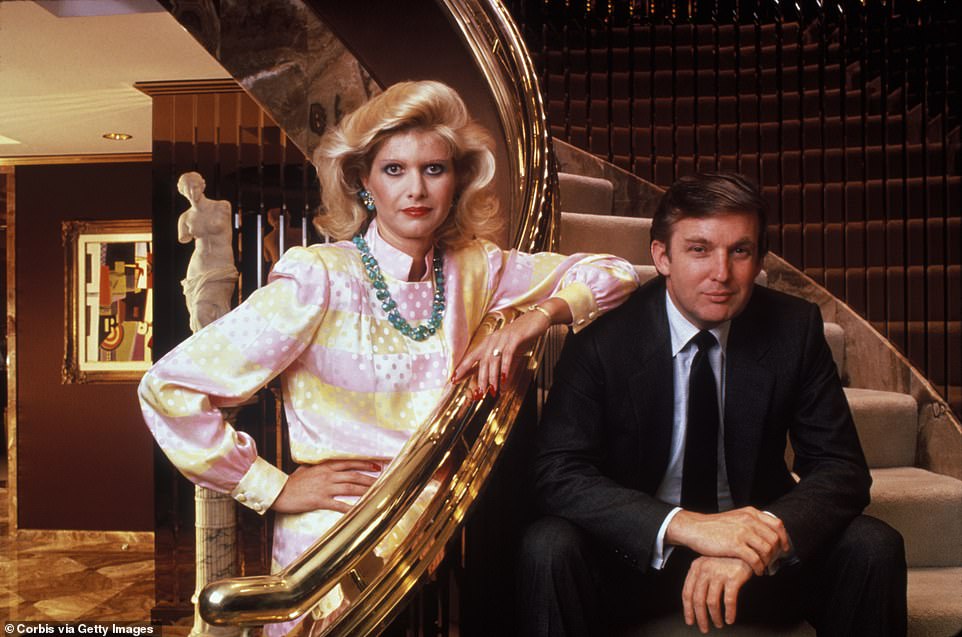 Ivana and Donald Trump met in the 1970s and were married from 1977 to 1992. In the 1980s, they were a power couple, and she became well-known in her own right, instantly recognizable with her blond hair in an updo and her glamorous look.

Ivana Trump also took part in her husband’s businesses, managing one of his Atlantic City casinos and picking out some of the design elements in New York City’s Trump Tower.

Their very public divorce was ugly, but in recent years, they were friendly. Ivana Trump was an enthusiastic supporter of Donald Trump’s 2016 presidential campaign and said they spoke on a regular basis.

Tucker Carlson alleges Kim Kardashian worked with Clintons to get Kanye to ‘read from...