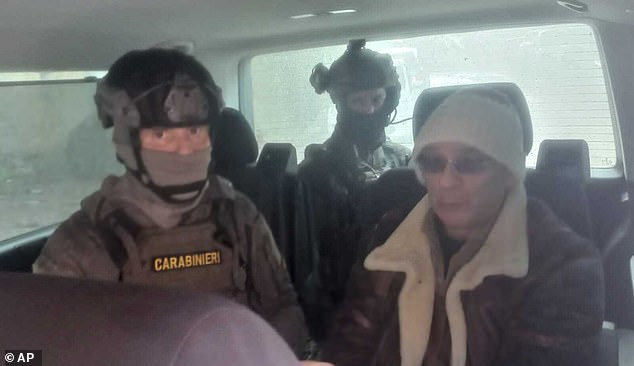 Italy’s most wanted Mafia boss, Matteo Messina Denaro, was today arrested at a private hospital after 30 years on the run.

Messina Denaro, 60, who had a 12-year-old boy strangled and his body dissolved in acid, was detained by Italian police at the Maddalena private clinic in Palermo, Sicily, for cancer checks.

The Mafia boss, who has not been seen in public for three decades, was pictured sitting in a police van wearing a brown leather jacket, a white skull cap and his trademark tinted glasses shortly after his arrest.

Messina Denaro, considered Sicily’s Cosa Nostra top boss even while a fugitive, was taken to a secret location by police immediately after his arrest.

Matteo Denaro, right, is seen in a car with Italian Carabinieri officers soon after his arrest at a private clinic in Palermo, Sicily, after 30 years on the run 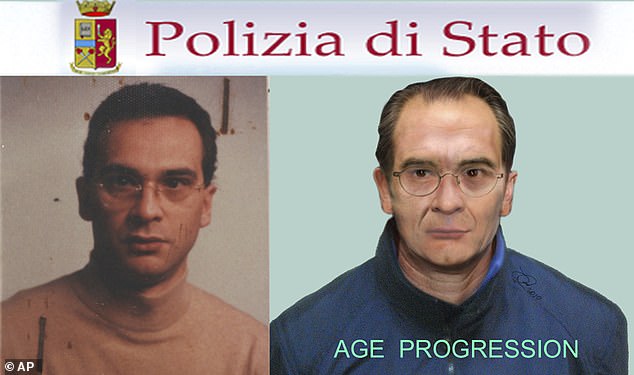 Italy’s most wanted mafia boss, Matteo Messina Denaro, has been arrested in his native Sicily after 30 years on the run. Pictured: A composite picture showing a computer generated image released by the Italian Police, right, and a picture of Mafia top boss Matteo Messina Denaro

A former trigger man who once boasted he could ‘fill a cemetery’ with his victims, Messina Denaro is believed to have become the ‘boss of bosses’ following the death of Salvatore ‘The Beast’ Riina in November 2022.

Messina Denaro was the last of three longtime fugitive top-level Mafia and as news of his arrest spread across Palerma, local residents emerged to applaud and shake the hands of the Italian paramilitary police officers who were involved in the operation.

The residents were seen cheering and wiping away tears as they felt a wave of relief that Messina Denaro, who had coordinated years of terror, had finally been detained.

Messina Denaro, who called himself Andrea Bonafede (Andrew Goodfaith), had tried to run from the private clinic and hide but was caught by the police officers.

Italian Prime Minister Giorgia Meloni hailed the arrest as ‘a great victory for the state that shows it never gives up in the face of the mafia’.

Messina Denaro, who was tried in absentia and convicted of dozens of murders, faces multiple life sentences.

He was sentenced in absentia to a life term for his role in the 1992 murders of anti-mafia prosecutors Giovanni Falcone and Paolo Borsellino.

Messimo Denaro, who comes from the small town of Castelvetrano near Trapani, also faces a life sentence for his role in bomb attacks in Florence, Rome and Milan which killed 10 people the following year. 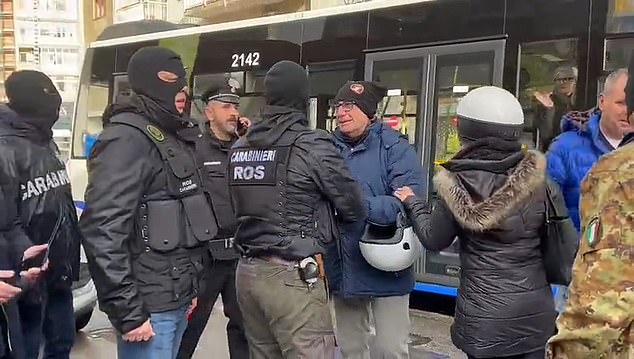 Messina Denaro was the last of three longtime fugitive top-level Mafia and as news of his arrest spread across Palerma, local residents emerged to applaud and shake the hands of the Italian paramilitary police officers who were involved in the operation (pictured) 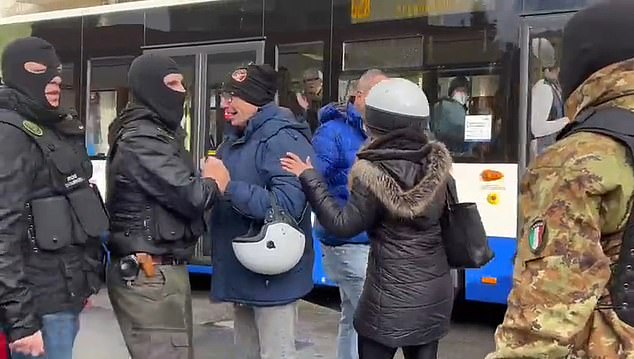 The residents were seen cheering and wiping away tears as they felt a wave of relief that Messina Denaro, who had coordinated years of terror, had finally been detained

In 1993, Messina Denaro helped organise the kidnapping of a 12-year-old boy, Giuseppe Di Matteo, in an attempt to dissuade his father from giving evidence against the mafia, prosecutors say.

The boy was held in captivity for two years before he was strangled and his body dissolved in a vat of acid.

Messina Denaro had been number one on Italy’s most-wanted list but the only known photo of him dated back to the early 1990s – but a new e-fit was created in 2014 with the help of another informant.

Even while a fugitive, Messina Denaro, who had a power base in western Sicily, was considered Sicily’s Cosa Nostra top boss.

Police said in September 2022 that Messina Denaro was still able to issue commands relating to the way the mafia was run in the area around the western Sicilian city of Trapani, his regional stronghold, despite his long disappearance.

In 2015, police discovered he was communicating with his closest collaborators via the pizzini system, where tiny, folded paper notes were left under a rock at a farm in Sicily. 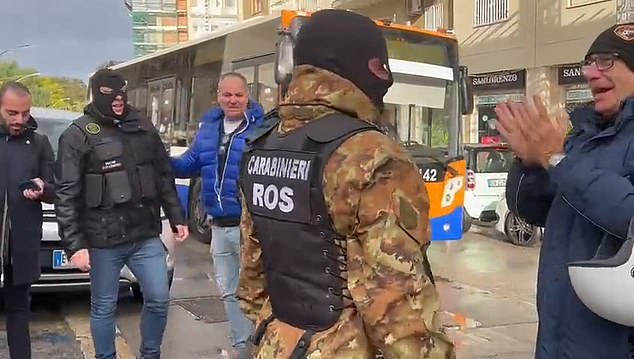 Fogazza, who himself is on a murder charge, said in 2016 that Denaro’s second-in-command Domenico ‘Mimmo’ Scimonelli approached his daughter to send the messages.

The right-hand man had taken his daughter for an ice cream and put the messages inside her jacket and backpack.

The daughter and the rest of Fogazza’s family have been living in a secret location under police protection while he co-operates with the prosecutors as they attempt to bring down the ‘boss of bosses’ in the Italian mafia scene.

Fogazza ran a car dealership in south-western Sicily and decided to collaborate with Palermo investigators after he was arrested last December for the murder of Salvatore Lombardo in 2009 who was killed after he stole a van from Scimonelli.

‘One day my daughter said ‘Uncle Mimmo’ had taken her for a gelato and put the messages inside her jacket and her backpack,’ Fogazza told prosecutors in Palermo according to Italian media reports.

Messimo Denaro’s arrest on Monday came 30 years and a day after the Jan. 15, 1993, capture in 1993 of convicted ‘boss of bosses’ Salvatore ‘Toto’ Riina, in a Palermo apartment after 23 years on the run.

Messina Denaro went into hiding in summer of that same year, as the Italian state waged a crackdown on the Sicilian crime syndicate following the murders of Falcone and Borsellino.

Italy’s Mafia boss who set the record for the longest time on the lam was Bernardo Provenzano, captured in a farmhouse near Corleone, Sicily, in 2006 after 38 years as a fugitive.

Once Provenzano was in police hands, the hunt focused on Messina Denaro, but despite numerous reported sightings of the boss, he managed to elude arrest, until Monday.

That all three top bosses were ultimately arrested in the heart of Sicily while they conducted decades of a clandestine life won’t surprise Italy’s police and prosecutors.

Law enforcement have long said that such bosses rely on contacts and confidentiality of fellow mobsters and complicit family members to move the fugitives from hideout to hideout, supply basic needs, like food and clean clothing and communication, and a code of silence known as ‘omerta.’

Tiffany Watson shows off her tan in a chic white bikini during romantic Tulum...

I worry trans ‘trend’ has gone too far, says leading psychologist of 30 years...