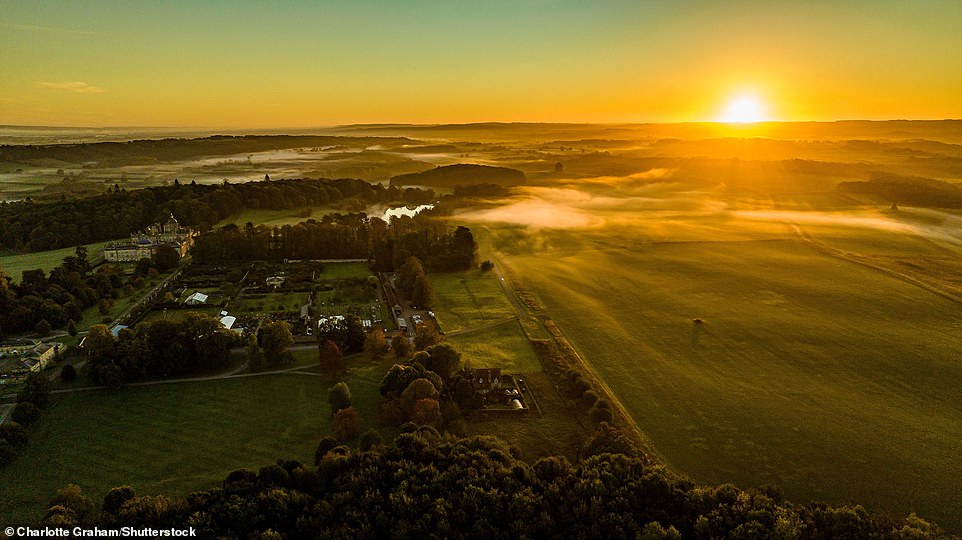 Is Britain set for an ‘Indian Summer’? ‘African plume’ will send temperatures soaring to 18C this week as UK basks in balmy end to October

A 500-mile wide ‘African plume’ will give Britain 21C (70F) Indian Summer spells ahead of Halloween – capping the hottest year ever.

The country is set for a fine day of sunshine and unusually warm climes for October, with temperatures reaching 18C (64.4F) today in southern England.

A cool morning and patches of fog will be dispelled by warm weather set to continue throughout the day, with some showers in the south this evening.

Temperatures are expected to take a dip with cloudy weather tomorrow before rising again on Thursday with highs of around 21C (70F) expected in London.

‘An exceptionally-warm plume of air from northwest Africa looks like being pumped across Europe and to Britain, with up to the low 30s in France, and over 20C in southern Britain.’

Elsewhere, Met Office forecaster Jonathan Vautrey predicted: ‘As we wake up on Tuesday morning, we might be greeted by some eerie mist and fog.

‘It will be a fairly chilly start to Tuesday morning, particularly where this fog lingers north of Ireland, Wales and down to central and southern areas of England – the sun not strong enough to clear this until about 10am.

‘As it does, there will be plenty of sunshine throughout the rest of the day and Tuesday is looking like a fine day to be out and about.

‘Temperatures are not doing too bad for the time of year, highs of around 14C in Scotland and 18C across southern areas of England.’

Morning Sunrise and mist lingers over the Castle Howard estate in the North Yorkshire, soon to be lifted by the sun 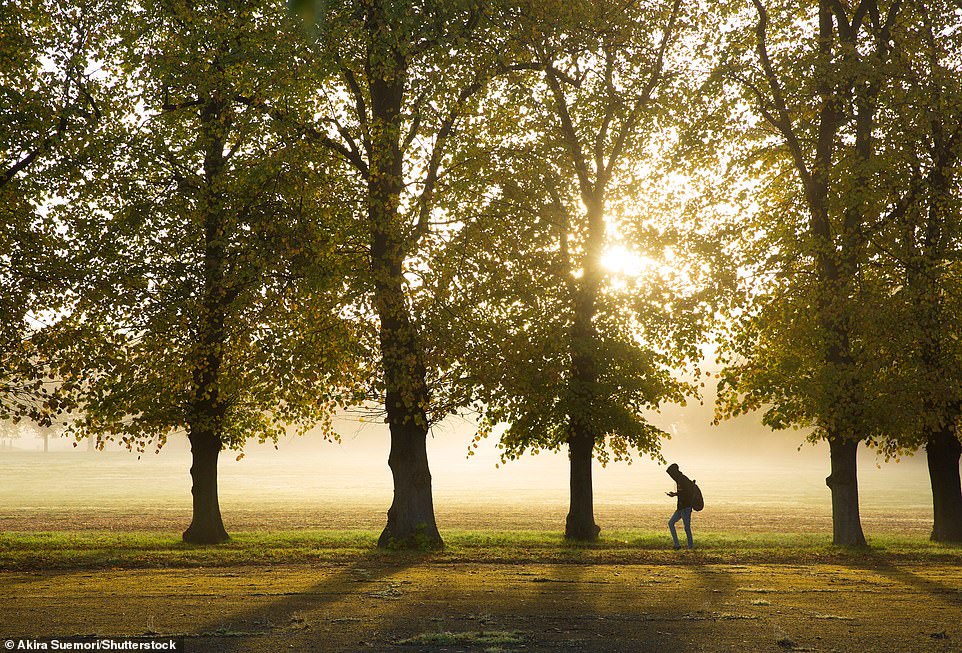 A person walks in a park wrapped in a dense fog in Ilford, East London, this morning before an outbreak of sunshine 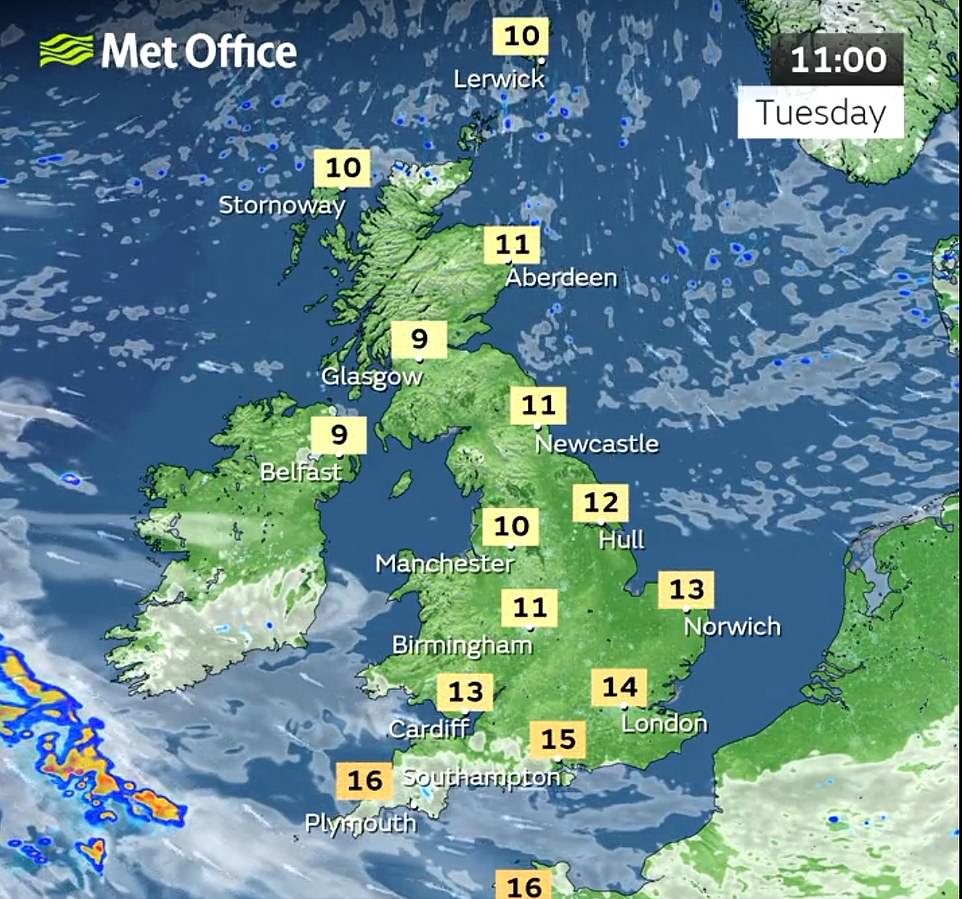 Sunshine will clear the mist from most parts of the country by late morning, with temperatures in the doubl digits across England and parts of Scotland 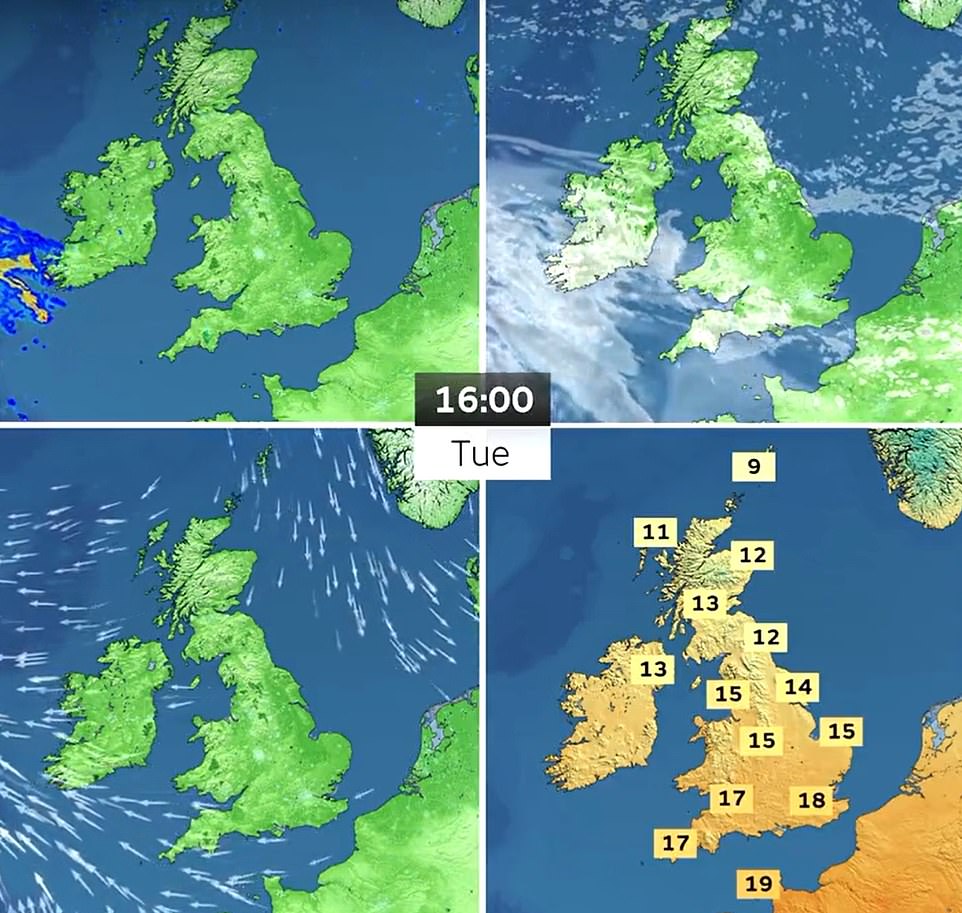 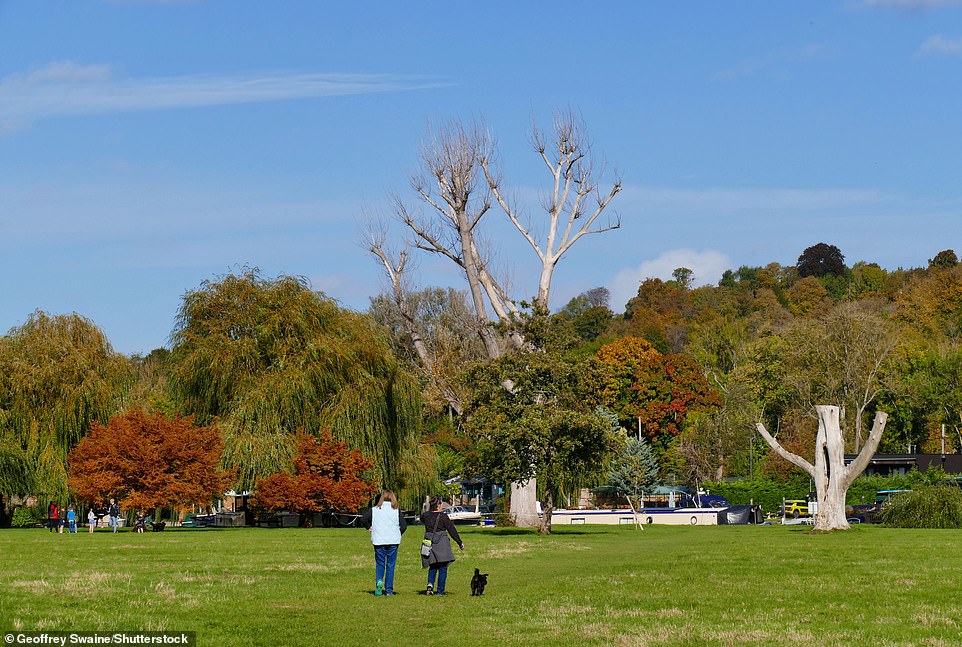 Last year October was a warm month with a typically autumnal mix of weather types with warm spells and regular showers (Pictured: People out along in Mill Meadows yesterday) 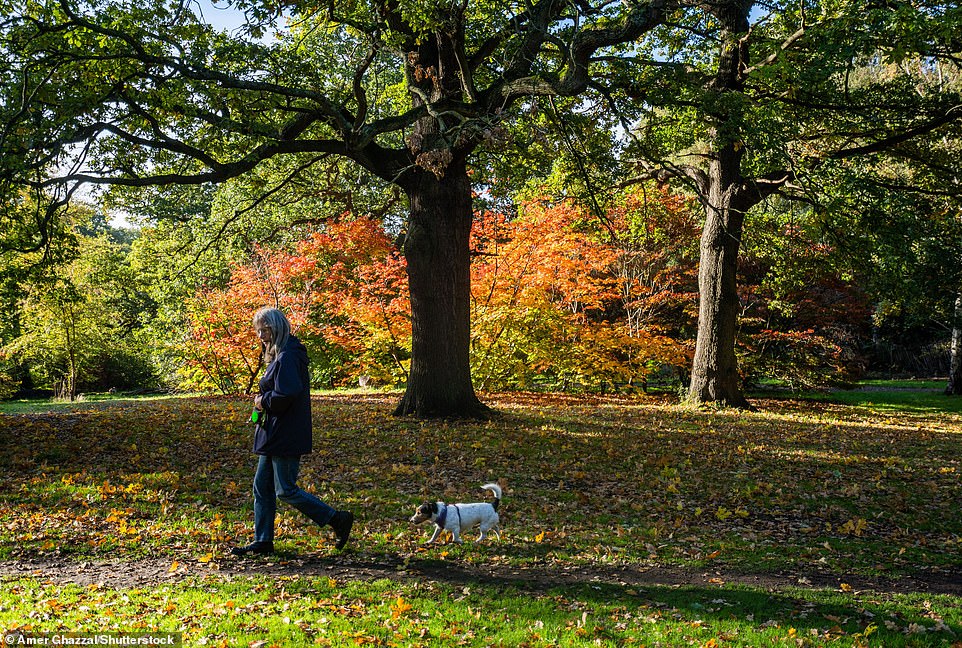 After a short period of unsettled conditions, the weather will calm down, with most places in the British Isles remaining dry. (Pictured: A walker with a dog on Wimbledon Common yesterday)

As the evening progresses, many northern areas will enjoy clear spells and isolated fog. Elsewhere, turning cloudier and windier, with showery rain developing in places, and odd heavy bursts, possibly with thunder.

A blustery easterly wind will bring a chilly feel for some on Wednesday. However, the southwesterly winds return by Thursday, pulling warm air up from the near continent, and allowing bands of heavy showers to push across the UK.

A Met Office spokesman added: ‘There will be showers coming and going through the day. But, with a bit of sunshine, temperatures certainly in the southeast could be knocking on the door of 20 Celsius easily. And elsewhere, temperatures still will be well above average because the air is still coming up from the south.’

The highest temperature in October ever recorded in the UK was in 2011 when temperatures soared to 29.9C in Gravesend, Kent.

Last year October was a warm month with a typically autumnal mix of weather types with warm spells and regular showers.

According to the Met Office, average maximum temperatures were more than 1C above long-term averages.

Experts have said the mild conditions will continue up until Halloween on October 31.

The news comes after the Met Office issued a yellow warning last month, when the weather was predicted to cause disruption to transport and businesses.

Emily Atack looks stunning in a plunging leopard print ensemble while soaking up the...