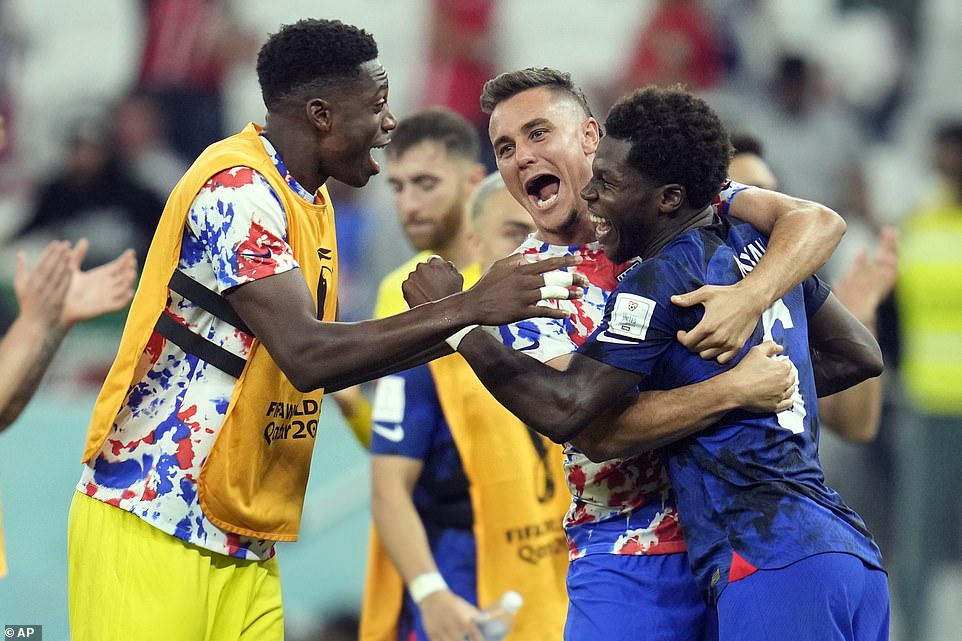 IF only the Iranians fired as many shots as their journalists.

In the build-up to this one the Americans had to put up the barricades in the press conference. Player and coach were asked all sorts of confrontational questions, from school shootings and the US fleet in the Persian Gulf to their country’s issues with racism and women’s rights. Indeed Gregg Berhalter was told, at one point, that his country cared more about inflation rises than his team.

Any semblance of truth to that was blown away when his brave young Americans secured a third passage from four to the promised land of the group stages with a win for the ages against surprisingly tepid opponents. 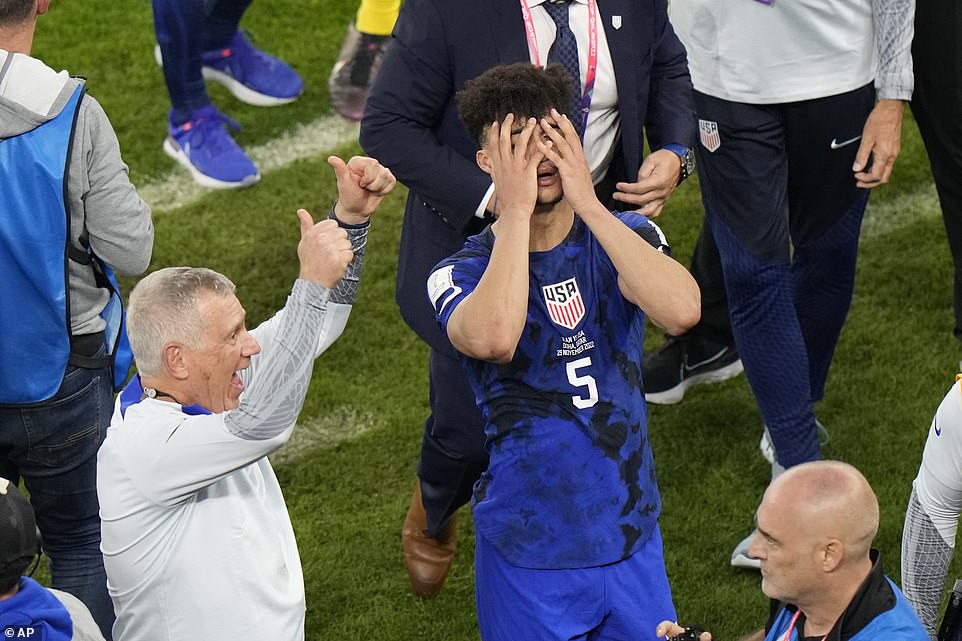 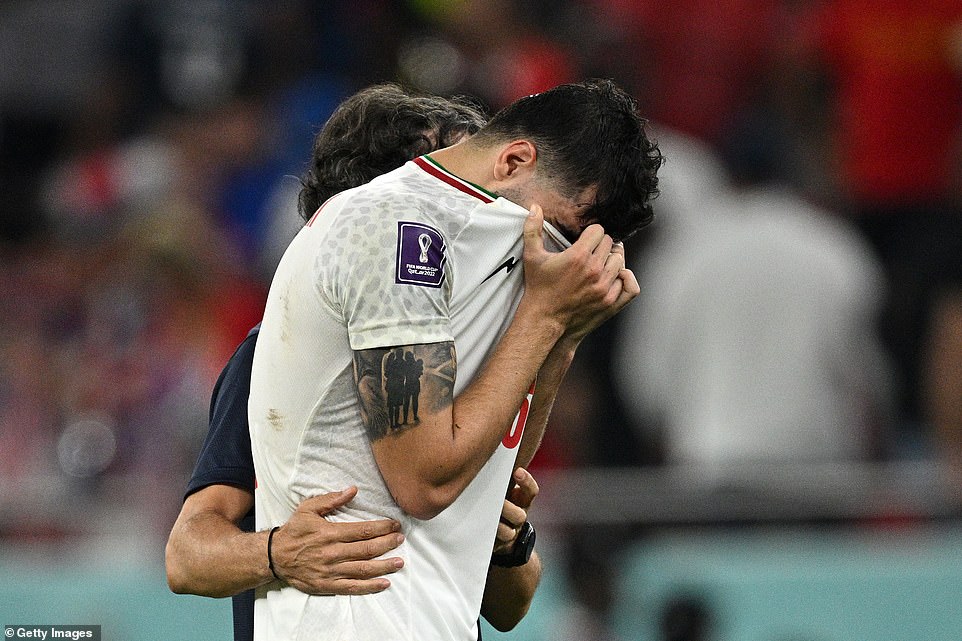 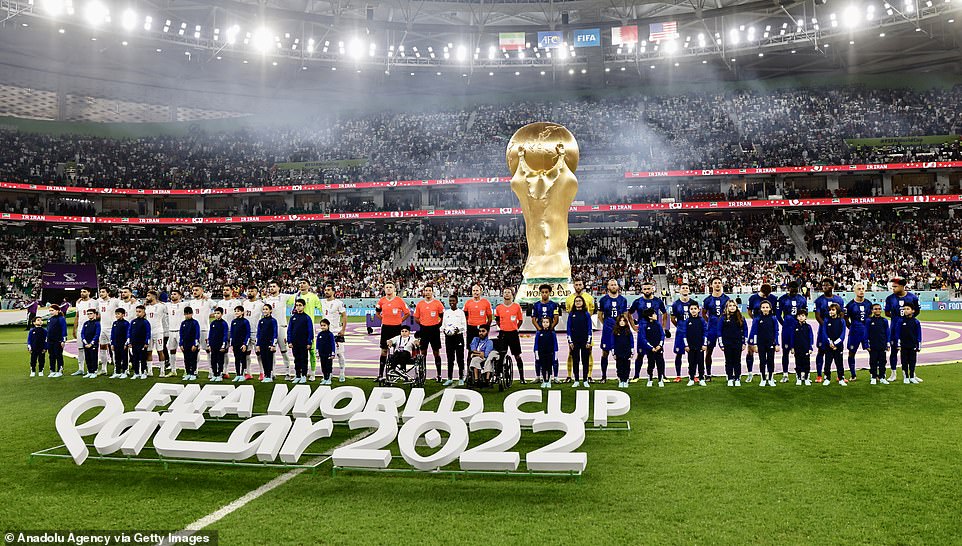 Berhalter’s tyros, with an average age of 24 years and 321 days, were the youngest XI of the tournament so far. Given all that had gone it was a bold call which brought its rewards. Many of those on the field will not have remembered the ghosts of 1998, when Iran’s 2-1 victory in a similarly supercharged clash sent the Yanks home.

Thanks to Christian Pulisic’s clinical first-half finish, which would see him injured and eventually substituted, some resolute second-half defending and no small dosage of courage, they banished any chance of a repeat in the desert.

This felt like a coming of age. Twenty million watched the draw with England. You would hope for more here. If Americans do not fall in love with soccer following this seismic victory, then they never will. This is a talented, well-drilled side. They deserve to capture the attention of a nation. 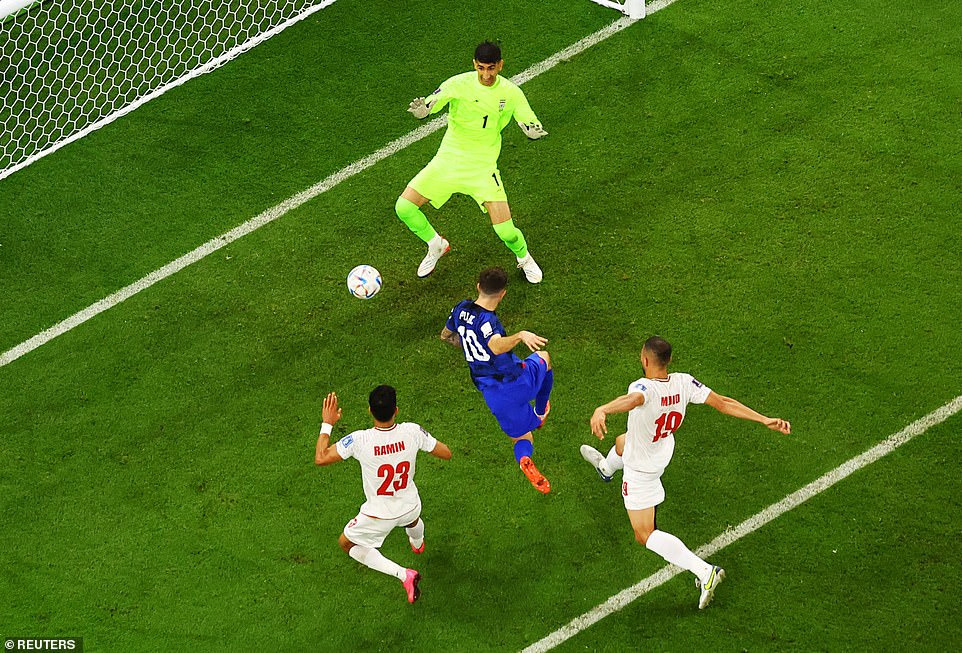 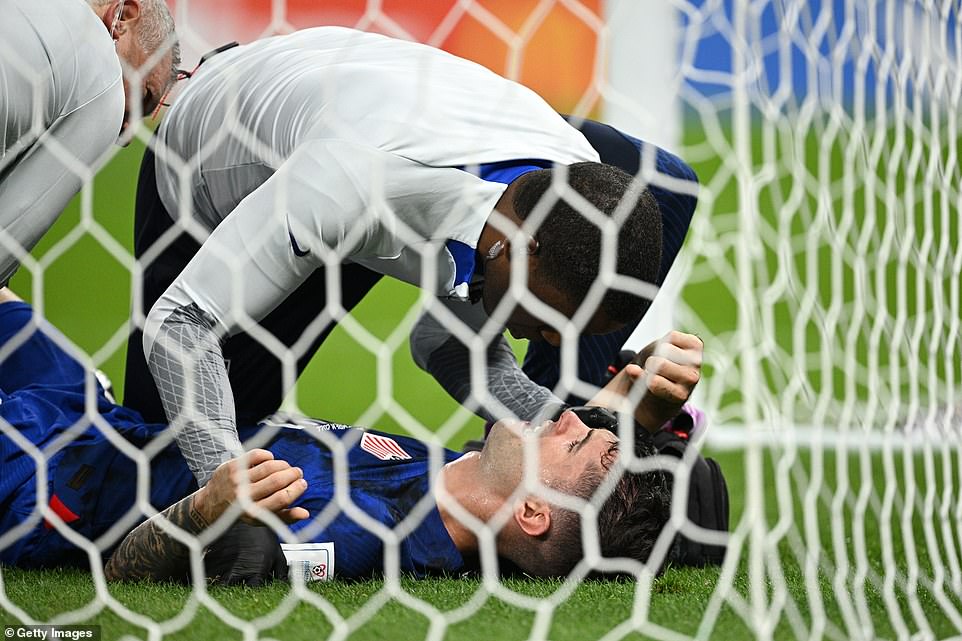 Pulisic’s full-steam-ahead run saw him collide with the keeper. He’d finish the first half on the field before being substituted.

There were again boos and jeers from some of those in a huge Iranian contingent when their anthem was played with the country in the grip of political turmoil following the death in custody of a 22-year-old woman arrested by the morality police. There had been reports that the players’ families had been threatened with imprisonment and torture should they, as they did against England, fail to sing. Unsurprisingly, they obliged.

It was also reported that Iran’s regime were to send over thousands of ‘actors’ to pose among their fans in an attempt at faux unity. They may have been fake but the noise generated was far from it. The players emerged to blaring horns and chants of ‘Iran’, with the din punctuated only occasionally by chants of ‘USA’ from an outnumbered but impressive American following.

Those in the minority saw their side dominate a lop-sided 45 minutes. The only complaint was the number of wasted chances, with Pulisic and Timothy Weah among the culprits. The fear has been that, for all their energy, talent and effort, Berhalter’s bright young things lack a cutting edge. But they found it – and given all that was at stake it should have come as no surprise that the deadlock was broken by an act of skill and bravery. 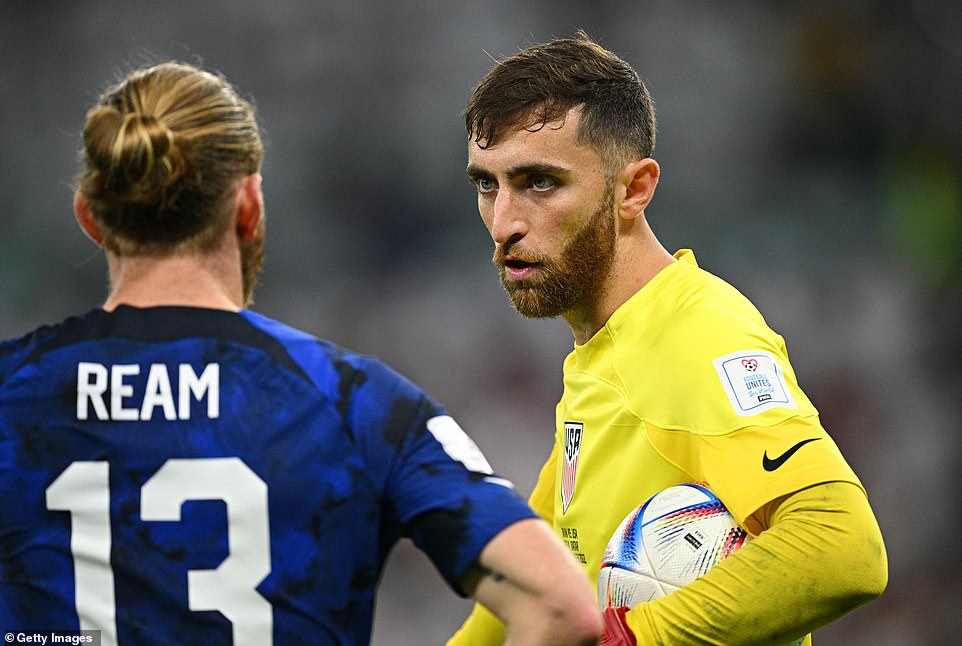 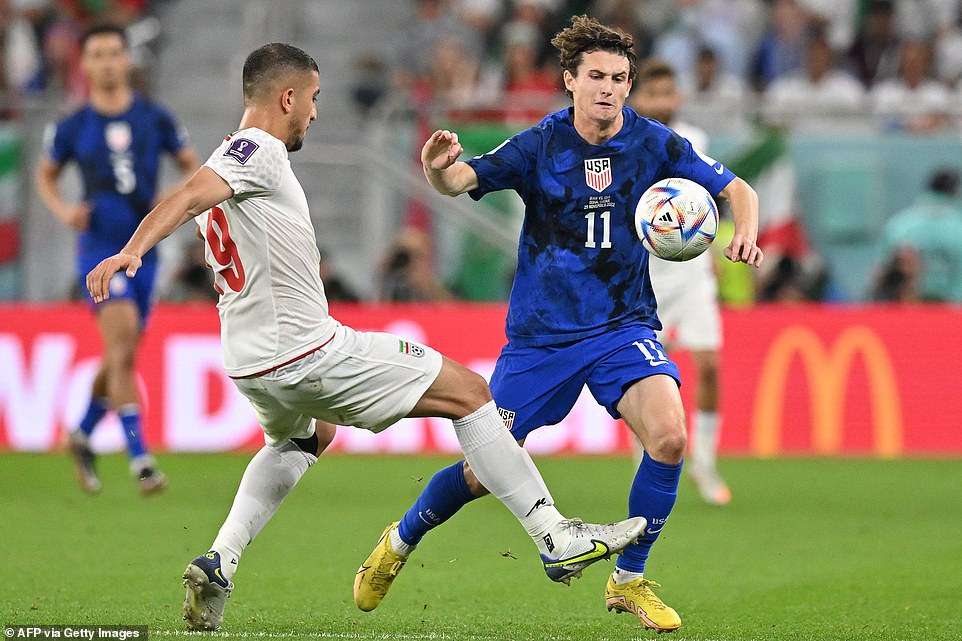 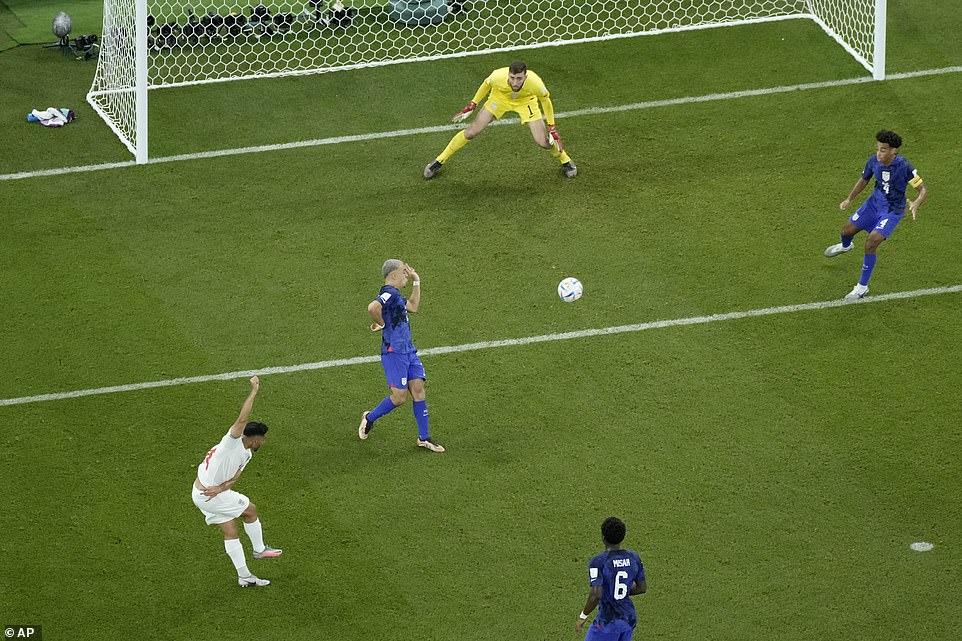 On 38 minutes the excellent Weston McKennie found Sergino Dest’s run at the far post and the full-back’s header across the six-yard boss was met by an incoming Pulisic, who got there first to sidefoot into the net before being clattered by the Iranian goalkeeper. Pulisic crumbled to the turf, the volume dropped to the floor and America were on top of the world.

Those in all-blue continued to dominate. On the stroke of half-time Tim Weah thought he had doubled the lead with a neat finish off the post but was called offside. Replays showed it was very much worth a second look but the match carried on after barely any stoppage. Someone in the VAR box must have very good eyesight.

With a groggy Pulisic substituted the Iranians finally came to life, bringing their crowd with them. Ghoddos, on as sub, stole a march and headed over from close range delivering a reminder, for the Americans, that disaster was only a touch away. 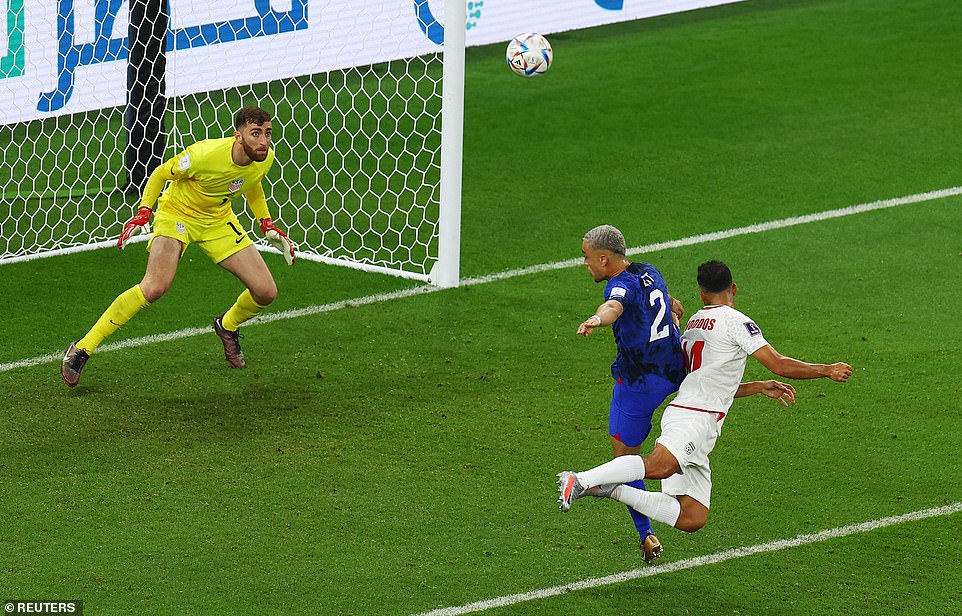 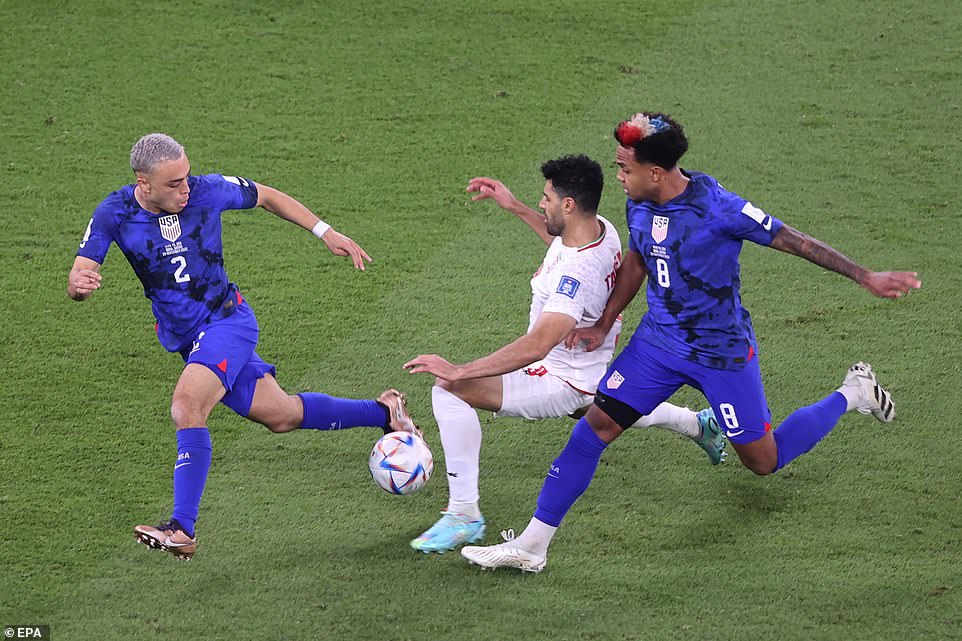 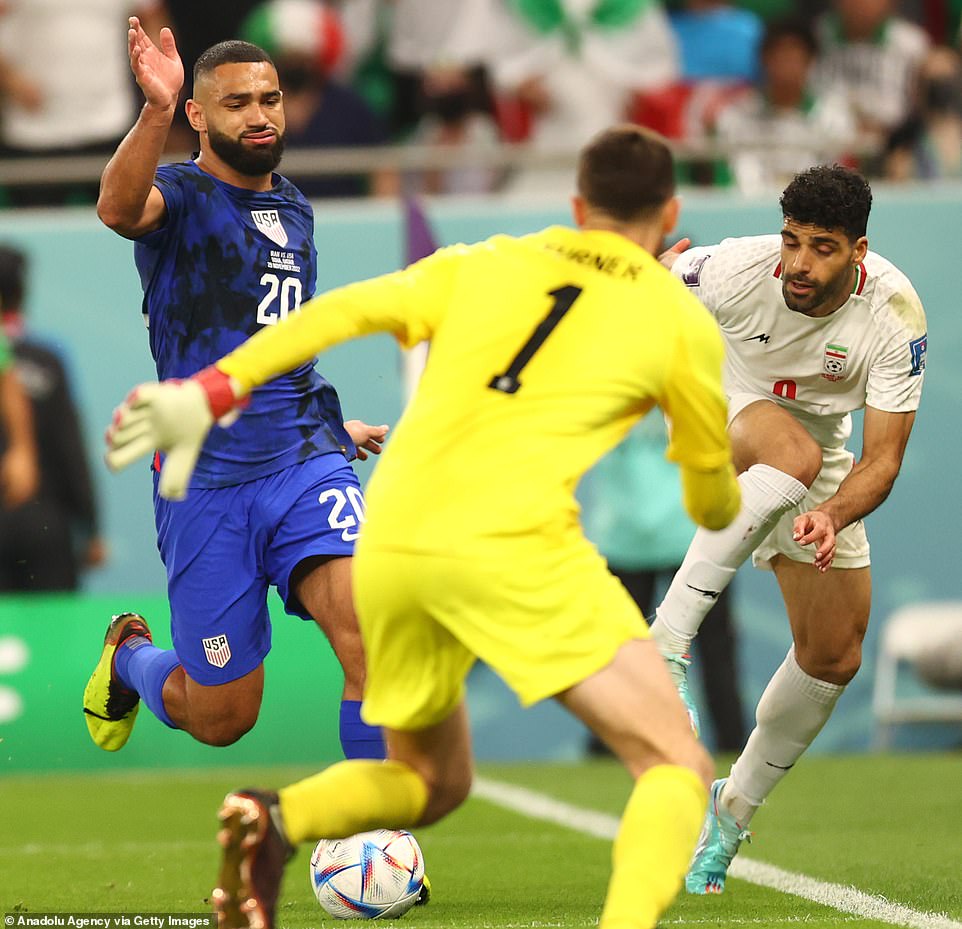 They got another one on 64 minutes when the same player wrapped his foot around a pullback which flew agonisingly wide with Matt Turner in the US goal beaten.

Iran became desperate, attacking with numbers and leaving opportunities to counter. On more than one occasion promising breaks were cut in their tracks by clever fouls.

Berhalter stuck five at the back. Time ticked by. The board went up, nine minutes. You could here the groans from Detroit in Doha. Morteza Pouraliganji, on his knees, headed a free kick wide. Turner missed a cross but Zimmerman hacked clear. The Iranians desperately appealed for VAR, presumably to give them a penalty for a phantom shove. It did not. It was not enough. The whistle blew and the kids were alright.

America go though, Iran go home. You fear for what may await them. 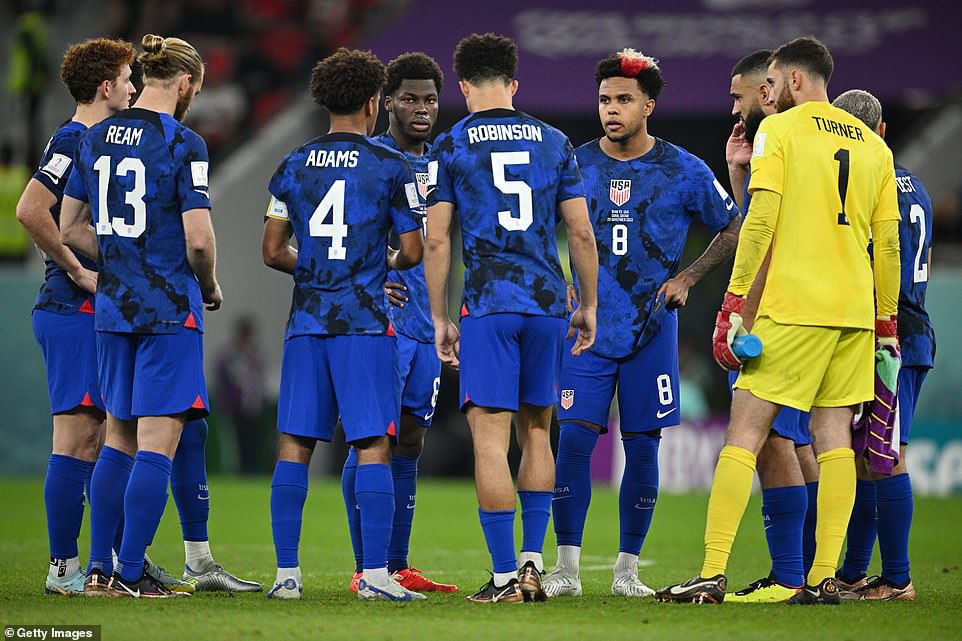 With this victory over Iran, the United States finish second in Group B behind England and will face the Netherlands Saturday 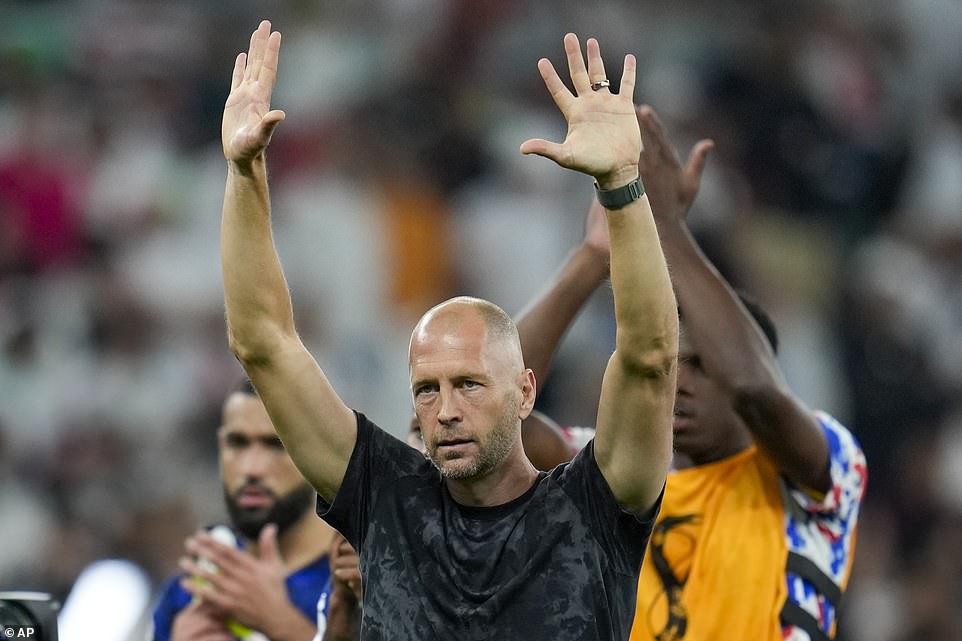 Despite pressure, scrutiny, and expectations, the USMNT under Gregg Berhalter have qualified for the World Cup Round of 16

British climate activists slash tires of 40 SUVs in NYC and leave leaflet: ‘your...

Meghan Markle claims crew thanked her for service on plane back to Canada in...

The Lord of the Rings: The Rings of Power: The Southlands’ true name is...