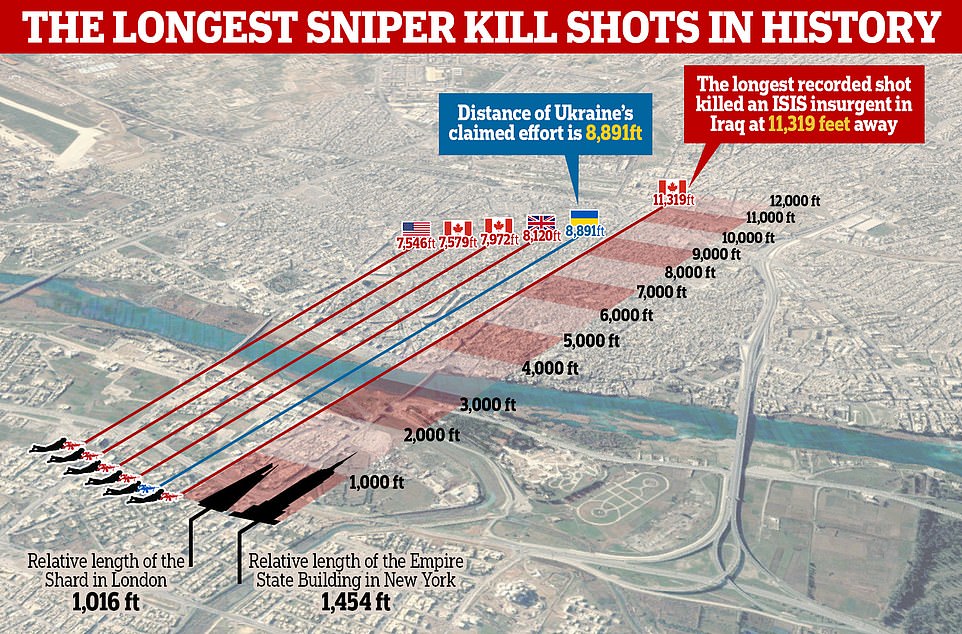 In an age of drones and precision guided missiles they are some of war’s last living legends: Snipers, the silent assassins capable of killing with a single bullet over extraordinary distances.

Ukraine claims one of its sharpshooters has just notched up the second-longest ranged kill on record at 8,891ft – equivalent to just over three times the height of Burj Khalifa, the world’s tallest building, or 35 New York City blocks.

But even that is dwarfed by the world record, held by an unnamed Canadian, at 11,319ft — which would be the same as taking out someone on the platform of London‘s Liverpool Street Station from the top of Big Ben.

As with all things, technology now plays a part — snipers use wind meters, laser rangefinders and advanced scopes to make their kills. But, in a world where some of the deadliest troops use video game controllers to blow out figures on a screen, the skill of the sharpshooter still comes down to one person, with one rifle, and one bullet.

And it is a skill they have honed into a deadly and precise science — taking into account everything from temperature to humidity and even the curvature and rotation of the earth — to find their targets.

Ukraine has claimed the second-longest ranged sniper kill on record, saying one of its sharpshooters took out a Russian soldier at 8,891ft – beating Briton Craig Harrison but still well behind an unnamed Canadian who managed 11,319ft 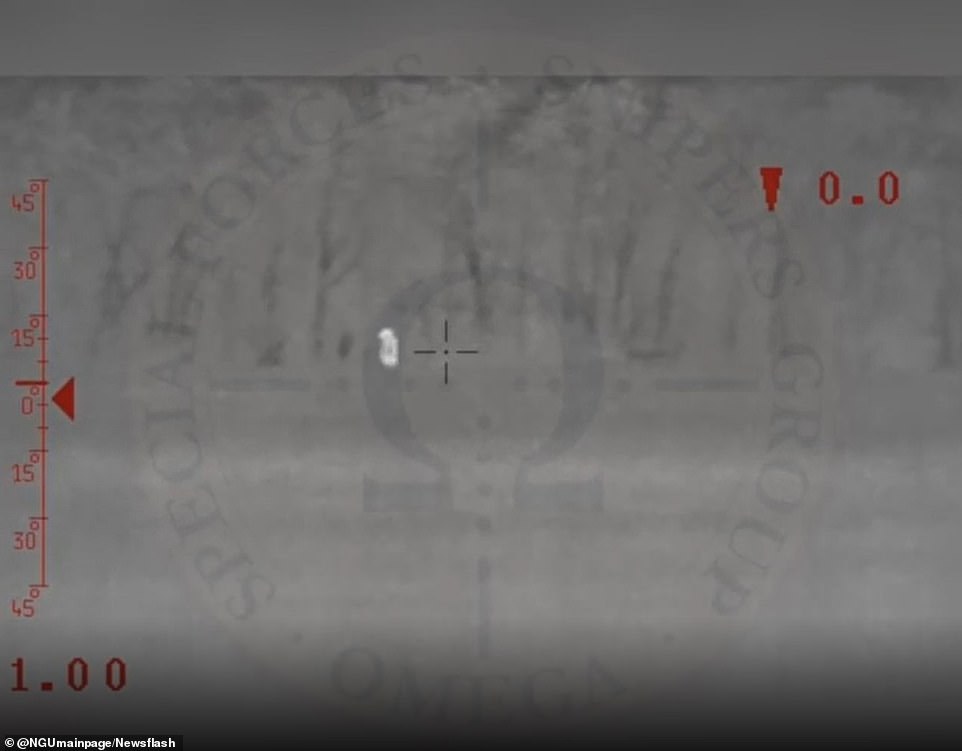 Ukraine released footage the military suggested showed the record-breaking shot, but has given almost no other details about it making the kill extremely hard to verify

Because the earth is still rotating after the bullet has left the gun, long-range shots also need to account for the difference between the earth’s movements and the target — known as the Coriolis Effect.

At a distance of around 1,000ft, a few inches of difference begin to be noticed between shots depending on which direction they are fired.

When firing from the Northern Hemisphere to the North or the South, the bullet will likely land to the right of the target.

From the Southern Hemisphere, the bullet will land slightly to the left when firing towards the North or the South.

Though seemingly a minor difference, expert snipes have to take even small changes into account, lest they miss the target altogether.

Snipers also have to account for spindrift. Instead of traveling straight down the middle, bullets are often angled slightly upwards after leaving the barrel of the gun — with the wind resistance causing the bullet to veer towards the right over long distances.

Briton Craig Harrison, a sergeant who served with the Blues and Royals in Afghanistan, held the record for the longest confirmed kill from 2009 to 2017 and is the only sniper among that elite club to talk about his experience.

Sgt. Harrison told how he was driven to take the shot while fighting in Helmand province in 2009, when a patrol he was part of came under fire from Taliban fighters.

During a three-hour shooting match, Sgt. Harrison recalled seeing his friends get stuck in a gulley under heavy fire from a Taliban machine gun that he could see – though the target was well outside his rifle’s effective range.

Conditions that day were perfect for long-range shooting: No wind, mild weather, and clear visibility. With eight men at risk of being wounded or killed if he didn’t do anything, Sgt. Harrison decided to give it a crack.

After running his calculations, Sgt. Harrison aimed his L115A3 and opened fire – waiting six long seconds to find out if he was right.

He wasn’t. The first bullet missed but the Taliban fighters heard it whistle past and broke off their attack to try and work out where it had come from – though, at that distance, it would have been hard to spot Sgt. Harrison even if he had been standing upright.

Making some corrections, he opened fire a second time and after another agonising wait saw one of the jihadists slump to the floor. He was hit by a burst of adrenaline but knew he needed to take out the second man or else the patrol could still be slaughtered.

Somehow, Sgt. Harrison repeated the impossible: Two more shots, and the second fighter was down. The patrol was safe. Later, an Apache helicopter with a rangefinder was sent up over his firing position to measure the distance to the target and came up with 8,120ft – the longest ever confirmed kill at that time.

It was a record that Sgt. Harrison would hold until 2017, when a Canadian sniper fighting ISIS in Iraq bested his effort in spectacular fashion – taking out a militant at 11,319ft. 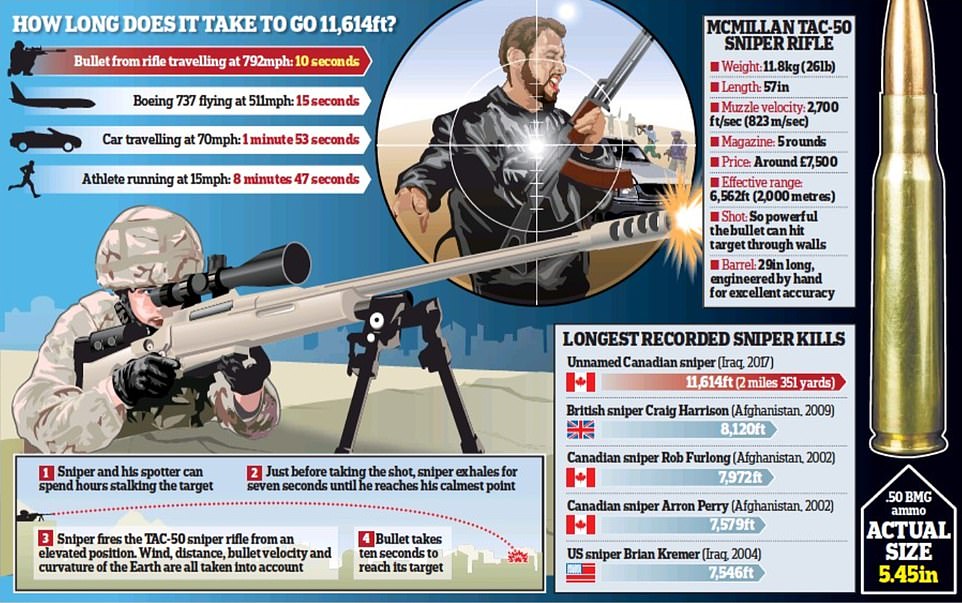 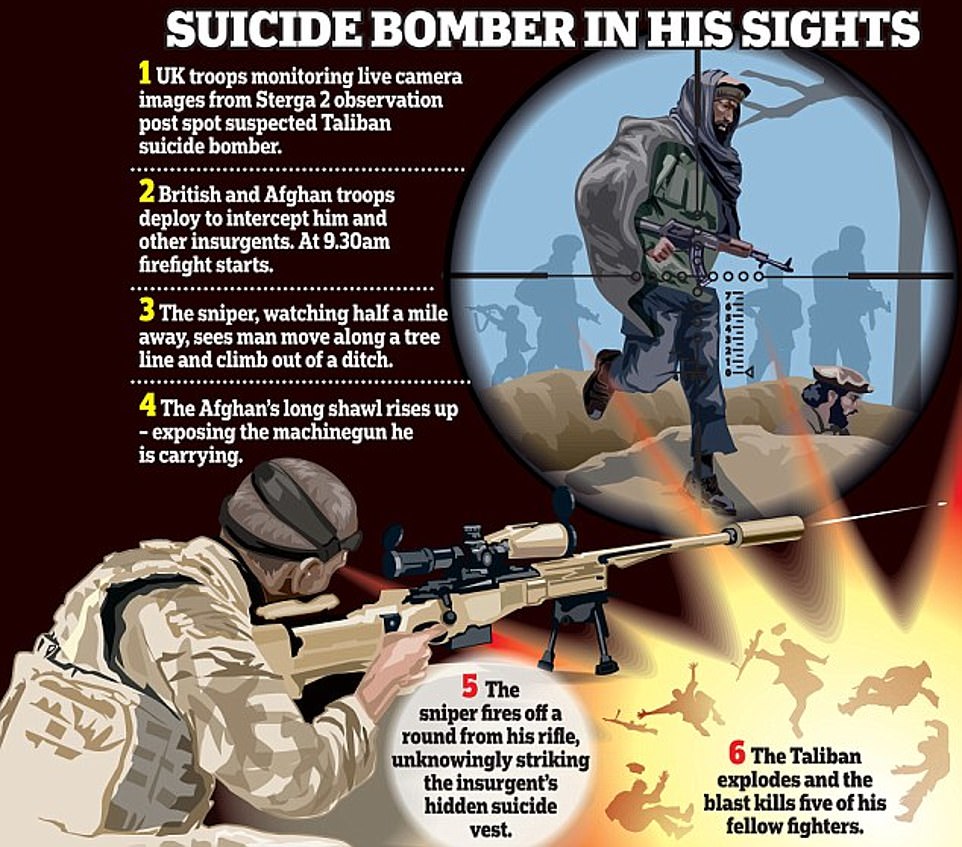 A British sniper holds a separate record for killing six Taliban fighters with a single bullet after it detonated a suicide vest the man was wearing, blowing up his fellow jihadists

The Canadian military said the kill was made using a McMillan TAC-50 sniper rifle, happened in May 2017, and it took a little less than 10 seconds for the bullet to hit the target. The soldier was a member of the elite Joint Task Force 2 which was providing support to Iraqi forces at the time, and it ‘disrupted’ an ISIS attack on them.

The kill was independently verified by video and other equipment that gathered data on exactly what happened, military sources added at the time. ‘It is a world record that might never be equalled’, the source added.

Little else is known about what happened – the Canadians refused to reveal the exact location or identity of the soldier for fears over his safety.

However, military news site SOFREP claimed the kill happened in Mosul and that the team involved had recently been training for long-range sniping missions – and had been taking out targets in the city for several days, pushing the range each time.

The bullet used for the record-breaking shot was a .50 calibre armour-piercing incendiary round, the site added, saying the record was filmed by a Predator drone circling overhead.

A separate record is held by another British sniper who killed six Taliban with a single bullet after it hit the trigger switch of a suicide vest he was wearing.

The 20-year-old Lance Corporal, of the Coldstream Guards, pulled off the stunning shot in Kakaran, southern Afghanistan, in December 2013.

His shot travelled a relatively modest 850m to reach its target, but the same shooter had previously taken out a Taliban fighter at 1,340m.

Ukraine has not said anything about its record shot other than the distance claimed – 8,891ft – making the kill extremely hard to verify. 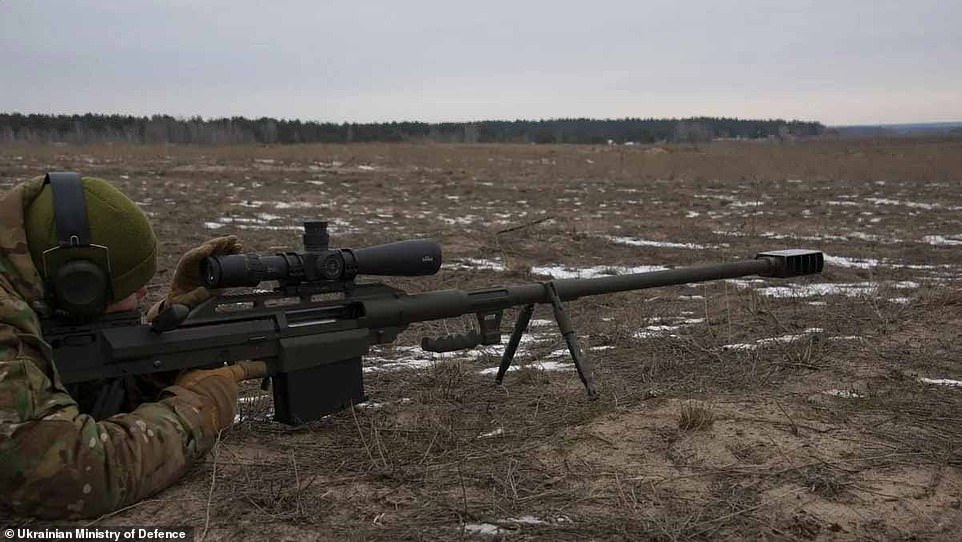 Ukraine is known to be using the Snipex Alligator rifle, which is larger and has a longer range than its more-famous Barrett .50 calibre cousin, meaning it is certainly possibly for one of Kyiv’s troops to notch a record kill

Kyiv’s military is known to make liberal use of snipers – including a Canadian sharpshooter using the nom-de-guerre Wali – and is known to field one of the longest-ranged and most-powerful rifles, the Snipex Alligator.

Larger, with longer-range and using a heavier bullet than its far more-famous US equivalent – the Barrett .50 calibre rifle – it has an effective range of 6,600ft but a maximum of 23,000ft, meaning it is certainly possible that one of Kyiv’s men notched up a kill at a little less than 9,000ft.

Footage published by the Ukrainian armed forces of their kill shows an image of a man moving among trees before the shooter centres their crosshairs on his chest.

The thermal sight jumps upwards, indicating the rifle has been fired, before the figure drops to the ground around three seconds later.

A second figure then comes running over to the first in an apparent attempt to help his wounded comrade, before the sniper fires a second time. Both figures then slump to the floor.

Others remarked that there was too short a time between the rifle being fired and the soldier slumping to the floor to account for the distance covered.

Confirming military kills is a notoriously tricky business that largely relies on self-reporting by soldiers due to the difficulty of getting information from behind enemy lines during a conflict.

Over-reporting of casualties is therefore common and has plagued military tacticians throughout history.

Adolf Hitler was said to have badly miscalculated the strength of the RAF during the Battle of Britain because the Luftwaffe exaggerated their kills by a factor of seven during the early weeks of fighting.

The RAF was later found to have over-counted their own kills by a factor of two.

Strictly ‘hit by another fix row’ as Fleur East was allowed to REDO her...

Mother whose 50th birthday erupted into brawl reveals how she was ‘punched in the...