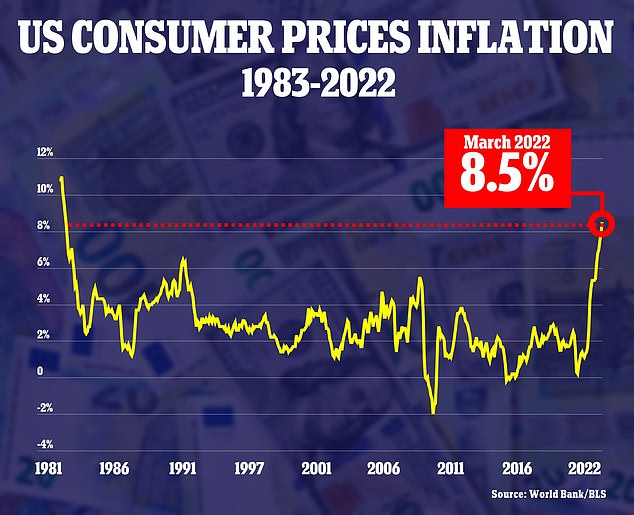 BREAKING NEWS: Inflation leaps to 41-year high of 8.5% hours after Jen Psaki sought to blame PUTIN’s invasion of Ukraine for the jump

Prices for US consumers are rising at the fastest rate in nearly 41 years, the latest data show.

The Labor Department said on Tuesday that the consumer price index increased 1.2 percent in March from the month before, for a 8.5 percent gain from a year ago.

It is the largest annual gain since December 1981. Excluding volatile food and energy, prices rose 6.5 percent from a year ago.

President Joe Biden ‘s administration tried to get ahead of the dire inflation news by blaming Russian leader Vladimir Putin‘s invasion of Ukraine.

Gas prices did soar in March in response to the invasion, contributing significantly to last month’s inflation rate.

According to AAA, the average price of a gallon of gasoline on Tuesday – $4.10 – is up 43 percent from a year ago, though it has fallen off record highs in the past couple of weeks.

The March inflation numbers are the first the capture the full surge in gasoline prices that followed Russia’s invasion of Ukraine on February 24.

Moscow’s brutal attacks have triggered far-reaching Western sanctions against the Russian economy and have disrupted global food and energy markets.

The escalation of energy prices has led to higher transportation costs for the shipment of goods and components across the economy, which, in turn, has contributed to higher prices for consumers.

‘The war in Ukraine has complicated the inflation outlook,’ Luke Tilley, chief economist at Wilmington Trust, told the AP.

Economists point out that since the economy emerged from the depths of the pandemic, consumers have been gradually broadening their spending beyond goods to include more services.

A result is that high inflation, which at first had reflected mainly a shortage of goods – from cars and furniture to electronics and sports equipment – has been gradually emerging in services, too, like travel, health care and entertainment.

EU accuses US of PROFITEERING from Ukraine war by selling higher price gas and...