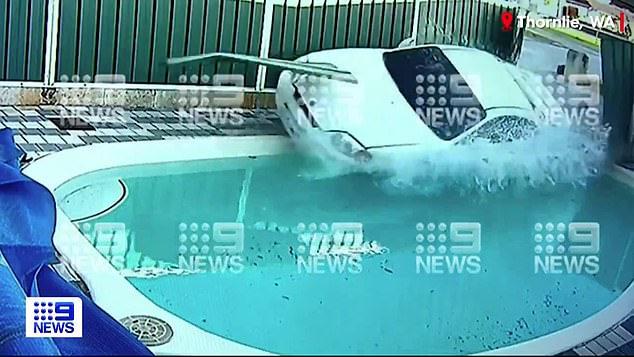 A woman has been dramatically rescued from drowning after crashing her car through a fence and into a backyard swimming pool.

A camera captured the moment the car crashed at high speed through a fence, slamming into the pool.

The Hyundai Tiburon was then brought to a halt by bouncing off the other side of the pool and started to sink.

Two neighbours rushed to save the driver after hearing a loud bang.

They jumped into the water and started smashing the driver and passenger side windows with bricks.

One of the men managed to get the shocked woman out of the driver’s side and lifted her out of the pool in the Perth suburb of Thornlie.

Western Australia Police said the 25-year-old driver was not injured in the incident which happened around 5.30pm on Tuesday, and an inquiry into the incident is continuing.

Towing driver Denis Groombridge attended the scene and had to get in the pool to retrieve the car.

‘One of the neighbours had to jump in and smash the window out and rip her out of the car,’ he told told Nine News Perth.

Mr Groombridge said the driver appeared ‘quite chirpy’ despite having just been rescued from a crashed car in a swimming pool.

‘It was her car and she didn’t have any insurance so I’ve done the right thing and told her I would take the car and scrap it instead of take payment,’ he said. 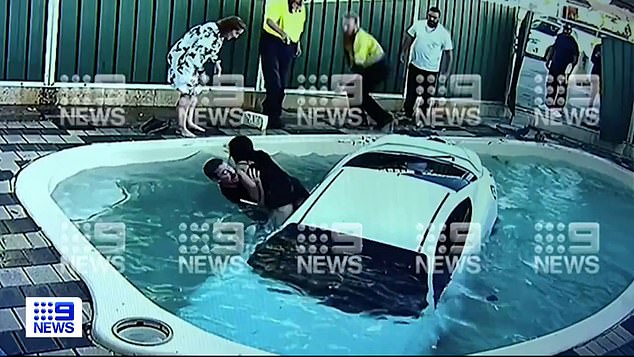 The neighbour who pulled the woman out of the car said he first pulled the window out and put it on the side of the pool.

His friend on the other said of the pool told the woman she would be OK and that they would get her out.

‘I just reached in and said, “Come to me baby”, and just grabbed her – I knew I was going to cut myself a little bit, but it’s not bad,’ he said.

Astonishing moment elephant cries for help after antelope falls into the water in its...

How to Troubleshoot the Burnham Gas Boiler