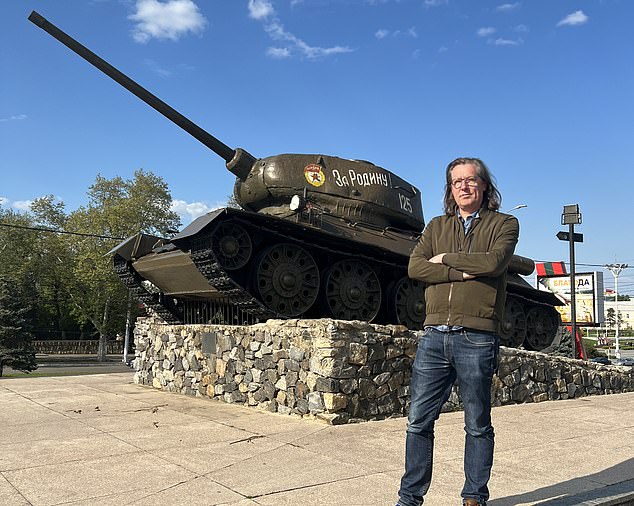 The attack by three men could not have been more brazen: a mid- afternoon strike on the headquarters of the state security bureau. One after another, they fired rocket-propelled grenades before jumping in their car and speeding off.

Smoke billowed from the building on the corner of Karl Marx Street and several windows were shattered but no one was hurt – it was a bank holiday so no staff were inside.

This mysterious attack on Easter Monday was merely the first in a series of incidents that have sparked fears Russia’s struggling invasion of Ukraine may soon explode wider.

For they are happening in Transnistria, a sliver of land on Ukraine’s western flank which broke away from Moldova during the collapse of the Soviet Union and remains firmly under Moscow’s thumb.

The incidents are accompanied by increasingly bellicose threats from the Kremlin – and fit Vladimir Putin’s cruel playbook by stirring tensions that he then uses as a flimsy excuse to send in his troops as self-proclaimed saviour of Russian speakers.

Bizarrely, one of the Easter Monday attackers dropped his grenade launcher and it was revealed to be a Russian-made type used only by the armed forces of Moscow, Transnistria and the African nation of Gabon.

‘I don’t think these were the Gabonese,’ commented a Moldovan minister drily.

Little wonder there is growing alarm in this small European nation of 3.5million people that they will be dragged into the Ukrainian war, a move that could add to pressure for Western intervention given the country’s close relationship with neighbouring Romania, a member of both Nato and the EU.

‘Our assessment indicates the hardline pro-Russian camp is behind all this to get Russia to intervene,’ said Mihai Popsoi, head of the ruling party’s parliamentary group. ‘These people don’t breathe without approval from the Kremlin.’

Popsoi admits to profound worries as Moldova relies on its neutrality for security more than on its small conscript army – especially with 1,500 Russian ‘peacekeepers’ based just one hour’s drive from Tiraspol, Transnistria’s capital, an isolated place of 400,000 people trapped in time from its Soviet past.

‘Hope and optimism is not a good strategy – but it is all we have,’ he said. 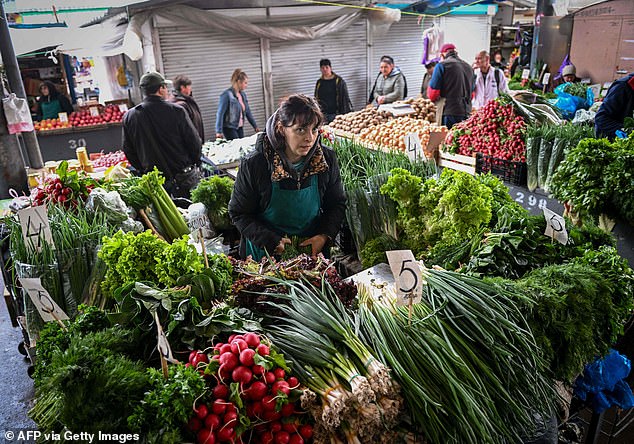 Little wonder there is growing alarm in this small European nation of 3.5million people that they will be dragged into the Ukrainian war, a move that could add to pressure for Western intervention given the country’s close relationship with neighbouring Romania, a member of both Nato and the EU. A woman is seen selling vegetables at a market in Chisinau

Yet this Russian-born York University graduate, whose father returned to Moldova to fight against the separatists in the early 1990s, adds they have endured ’30 years of anxiety over the frozen conflict’ in Transnistria.

Transnistria, an impoverished area not even formally recognised by Russia, feels like a hangover from yesteryear with statues of Lenin, hammer and sickle insignia and black-and-white portraits of Soviet heroes hanging by the main street.

But when I sneaked in this week, I also saw Russian ‘peacekeeping’ soldiers, military barracks and new armed checkpoints. Sources told me there has been significant recent work to upgrade the airport for handling military planes.

Tensions started rising after a senior Russian general said last month the Kremlin intended to take control of southern Ukraine to create a direct land link to Transnistria where he claimed there was ‘oppression of the Russian-speaking population’. 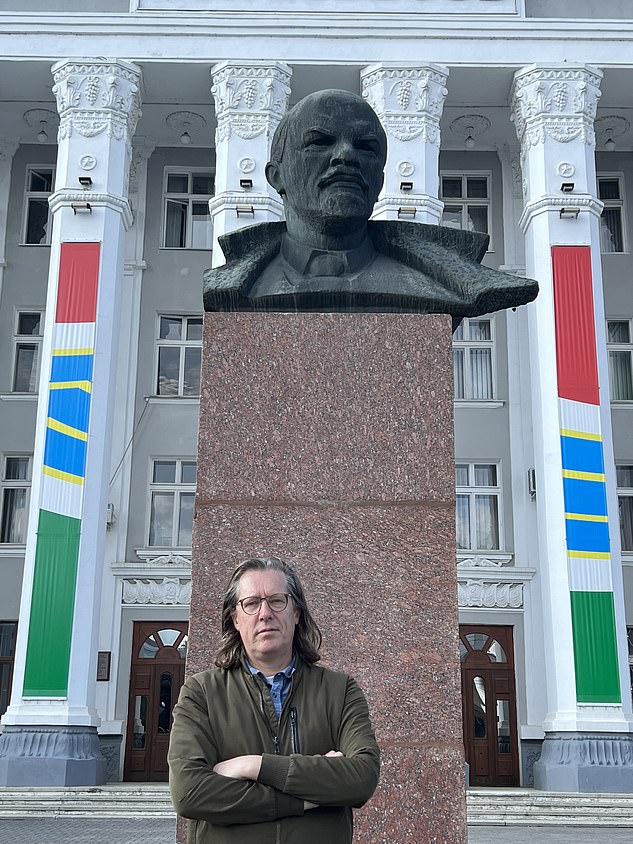 Transnistria, an impoverished area not even formally recognised by Russia, feels like a hangover from yesteryear with statues of Lenin, hammer and sickle insignia and black-and-white portraits of Soviet heroes hanging by the main street

This was followed by calls from politicians in Transnistria for recognition as an independent state in the face of ‘attacks’ and Nato meddling – a disturbing echo of the fake claims made by Putin’s stooges in the Donbas region of Ukraine before the war.

It is believed that there are 7,000 troops under Kremlin control, including Transnistria’s own forces, along with an old Soviet arms dump containing 20,000 tonnes of munitions.

Ukrainian intelligence is warning Putin may use Victory Day next Monday – marking Russia’s 1945 defeat of Nazi Germany – to create a pretext for invasion.

While in Transnistria, I watched TV crews film officials handing out the Ribbon of St George (Russia’s version of the Remembrance Poppy, which is banned in Moldova) and interview recipients.

Oleksandr V Danylyuk, a Ukrainian government defence and security adviser, said Putin might seize Moldova to claim to Russia that his ‘troops can achieve miracles’.

The Royal United Services Institute also warns that Russia might destabilise Moldova to tie down Ukrainian forces, assist its own military logistics, counter the growing pro-European sensibilities and show that support for Kyiv has wider consequences.

Moscow’s concern over Moldova has been bubbling since November 2020 when voters threw out a pro-Kremlin president and turned to Western-educated leaders who promised to tackle corruption.

Vladimir Voronin, a veteran Communist Party chief who was Moldova’s president for eight years, recently claimed that people driven to despair have the right to revolt in the face of ‘the current dictatorial regime’.

Meanwhile, Russian intelligence, having warned Putin about Russia’s declining influence in Moldova, hopes to exploit the economic fallout of the war which has seen spiralling energy prices, loss of exports and a huge influx of refugees over Ukraine’s border. 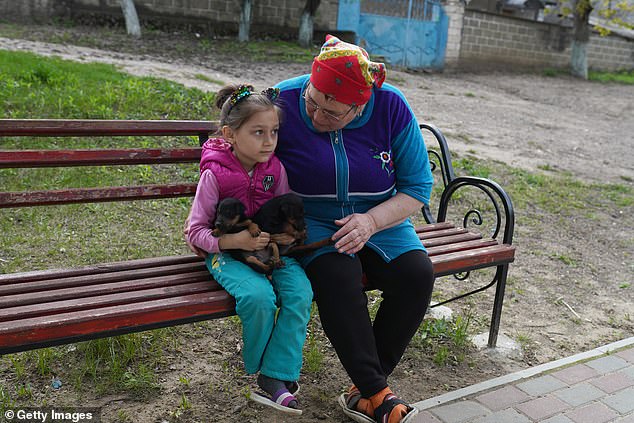 The Bulgarian government has urged its citizens to leave Moldova amid widespread claims that families are starting to flee potential conflict, with Ukraine having blocked roads by the border and some military-age men in Transnistria already leaving to avoid conscription. A grandmother is seen talking to her grandchild in Moldova

‘We struggle with everything in terms of prices, money, opportunities – and now with various forms of Russian aggression,’ said Silvia Ursul, 32, an environmentalist in Chisinau. ‘It is taking a toll on my mental health.’

Like many others, Ursul compares the situation with Europe’s build-up to World War Two.

‘The Kremlin will do whatever it takes to destabilise us and take us back to the Dark Ages.

Valeriu Gushan, 36, a welder and military reservist, said he is worried that Putin will oust the Moldovan government with the help of collaborators – and that his country’s leaders are not preparing their people to fight back in the face of an existential threat.

He said: ‘I fear the government won’t give us the weapons to protect ourselves from the Russians.’

Meanwhile, the Bulgarian government has urged its citizens to leave Moldova amid widespread claims that families are starting to flee potential conflict, with Ukraine having blocked roads by the border and some military-age men in Transnistria already leaving to avoid conscription.

‘People are under constant stress and don’t know what to do next,’ said Ekaterina, a hotel manager in Transnistria’s capital.

‘There are so many negative scenarios. I hope we won’t have to hide in the bomb shelters that city services are preparing for us. We try to continue with our normal lives – although we are sitting on a powder keg.’

Despite the power of Russian propaganda in oligarch-dominated Transnistria, analysts hope its leaders and citizens will seek to avoid conflict after seeing the destruction inflicted on Ukrainian cities such as Kharkiv and Mariupol.

Alexei Tulbure, Moldova’s former ambassador to the United Nations, believes that a Kremlin attack from Transnistria on Odesa, just 25 miles along the coast, could backfire since its inferior troops from the enclave would be crushed by battle-hardened Ukrainian defence forces.

‘Ukraine would be happy since it would eliminate this Russian threat quickly,’ he said. However, Tulbure added that there is a risk that any attack on Moldova could drag in Romania, which has deep historic and cultural ties to his nation. Many people in both Moldova and Transnistria have Romanian passports.

‘They would be under huge pressure to intervene – and this might give the green light for Nato,’ he said.

This week, the EU pledged to ‘significantly increase’ military support. During a visit to Chisinau, Charles Michel, president of the European Council, tweeted: ‘Transnistria should not be used as a Trojan horse to further exacerbate tensions in the region.’

Tulbure, who is collecting oral histories from elderly Moldovans with memories from the 1940s of Stalin’s deportations to Siberia and the genocidal slaughter of Jews, sees hideous parallels between Putin’s actions and these past horrors.

‘We are witnessing the same sort of propaganda techniques to dehumanise people, the same sort of rape and murder being carried out by soldiers – and it is astounding that it’s coming from one of the victor countries in the Second World War.

‘I fear that Putin’s war has killed the Russia that existed in the Moldovan soul,’ he added, shaking his head sadly.