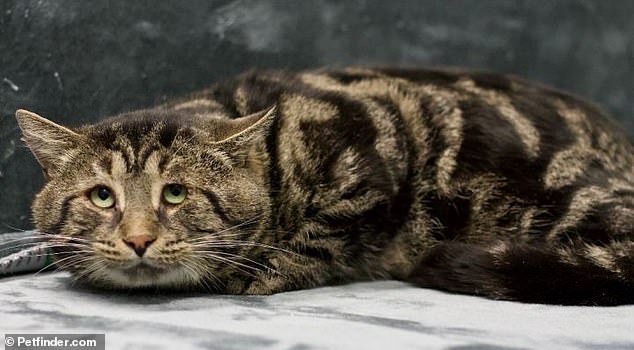 ‘I would die for him’: Lonely rescue cat who can’t eat by himself finds a permanent home after sending animal lovers wild with ‘sad eyes’

By Jessica Taylor For Mailonline

Five-year-old Fishtopher, who had been taken in by Homeward Bound Pet Adoption Centre in Blackwood, New Jersey, captured the hearts of people all around the world after he was described as ‘sad and depressed’.

After his listing was posted on Twitter, Fishtopher sent the internet into a frenzy, with hudreds of people offering to adopt him – and it seems all the attention has found him a new permanent home.

Fishtopher, who had been taken in by the Homward Bound Pet Adoption Centre in New Jersey, sent animal lovers wild on Twitter as his sad eyes won them over – and he has now found a home

The shelter’s description read: ‘Fishtopher is not a fish out of water, but he is out of sorts at the shelter. He is very sad and depressed and will only eat when he has company.

‘Five year old Fishtopher was found as a stray, maybe he is missing his family. Fishtopher reminds you of a Bengal with his cool coloring. He is a sweet, easy-going, laid-back boy.

‘Fishtopher loves being pet, and is an affectionate boy. He wouldn’t even look up for pictures, but did enjoy his one on one attention, and getting chin rubs.

‘Fishtopher is a big cheeky boy, wouldn’t you love rubbing up on those big cheeks? He loves cuddling up in arms, it seems to make him feel secure.

‘We feel that Fishtopher would do best in a more quiet home. Please come rescue our big loveable boy!’

Twitter user Molly Clarke posted screenshots of Fishtopher’s description, as well as a photo of his sad face, and implored other people to consider adopting him.

She wrote: ‘I swear to God. If one of you doesn’t go get Fishtopher…’

Others were quick to express their affection for the lonely tabby following Molly’s post, and scrambled to offer themselves up to take him in.

Another said: ‘Fishtopher is gorgeous! That sweet face! Please someone snap him up! He’s a Thanksgiving gift.’

One person urged their followers: ‘Please somebody give this sweetheart a forever home.’

After winning hearts across the internet, it seems Fishtopher generated enough attention to finally find his ‘forever home’, as the shelter’s listing now labels him ‘adopted’.