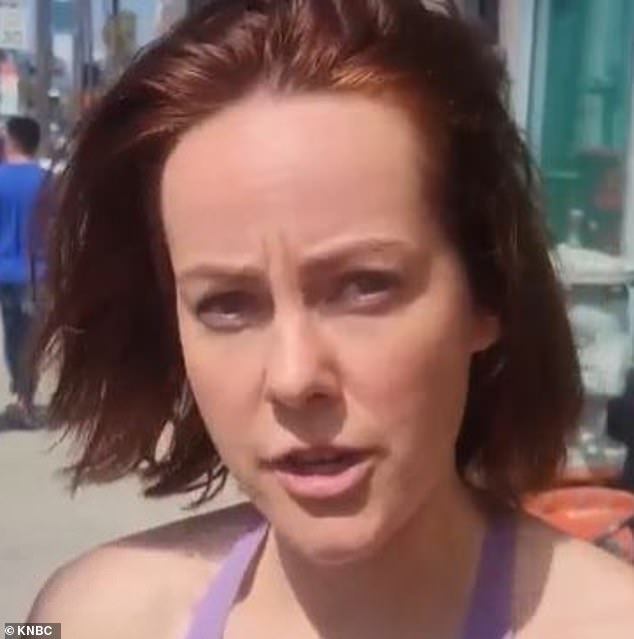 Hunger Games star Jena Malone helped save a small dog from being tortured to death by an abuser who was himself then set-on by an angry mob.

The actress, 37, stopped her car on seeing the bichon frise-type dog, named Champion, being yanked into the air by by its lead on Sunset Boulevard in Hollywood on Monday.

Malone, who played Johanna Mason in the dystopian movie series, rushed over to pull Champion away from the unnamed attacker – whose mom is said to be Champion’s owner.

Three other men were then filmed descending on the abuser and beating him to the ground, with one man even whacking him with a stick while yelling: ‘What the f**k are you doing?’

The dog was left with broken ribs and a broken hint leg, NBCLA reported.

Hunger Games actress Jena Malone, pictured, has shared how she helped save a dog that was being attacked by an abusive man 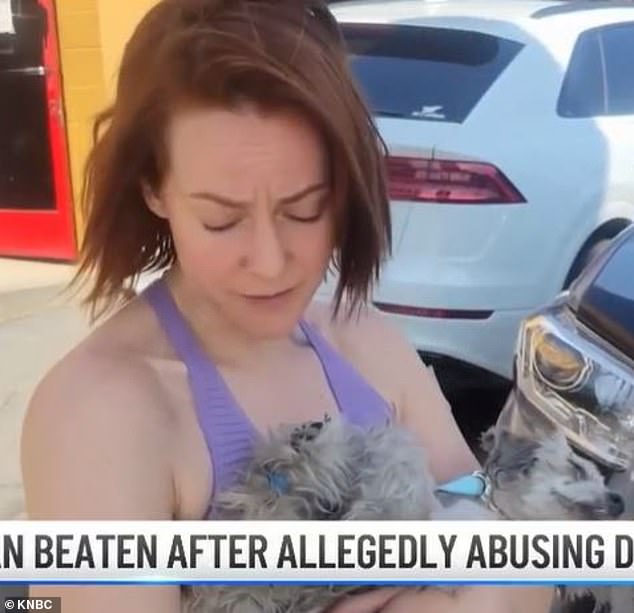 Malone is pictured with the dog, named Champion, in the immediate aftermath of the attack 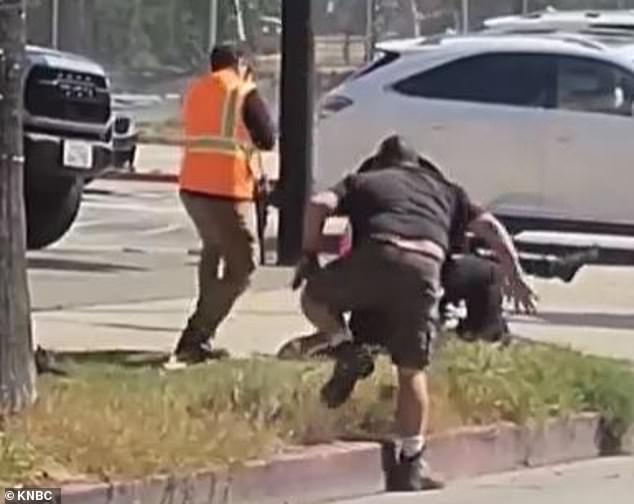 A group of men were filmed angrily beating the man accused of abusing Champion, with one even attacking the alleged torturer with a stick

Speaking in the immediate aftermath of the attack, Malone said: ‘I pulled over and started chasing him because that’s absolutely not okay.’

Shockingly, the man accused of abusing the dog was unrepentant when grilled by a cameraman, and claimed the animal’s bad behavior had riled him.

The alleged abuser has since been arrested for animal cruelty, while the mob filmed attacking him won’t face charges.

But lawyer Andrew Leventhal says that the men should have stopped beating the suspect after getting him down on the  ground. 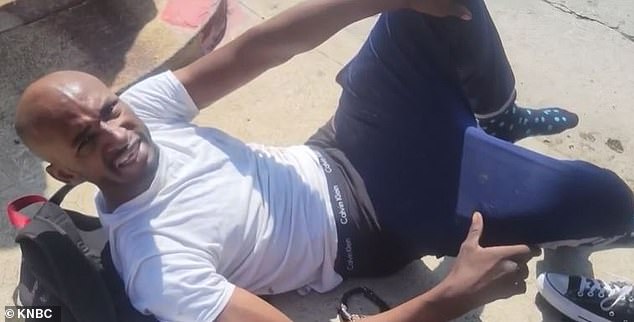 This is the man accused of attacking Champion. He told a TV camera that the dog hadn’t been obeying him. Champion is said to have belonged to his mother 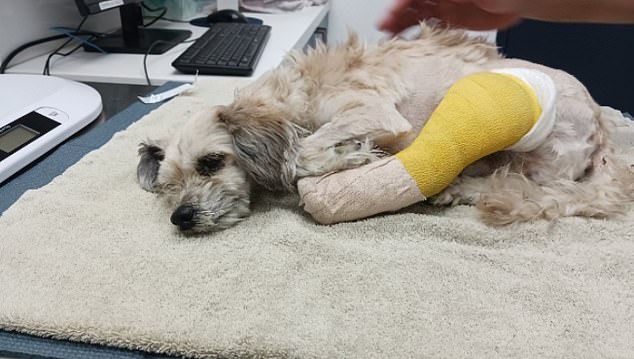 Malone later detailed the drama on her Twitter account, writing: ‘This was really scary. I saw a man kicking repeatedly a small dog on the sunset, yanking him up in the air and absolutely choking the dog.

‘I yelled at him to stop from my car but he wouldn’t. I got out of my car to try and get the dog but he started running.

‘So I started chasing him. I saw other people watching on the street upset , as they must have seen the same abhorrent behavior I witnessed , so I tried to signal a man in an orange vest to run with me to chase him.

‘Cause at that point I really didn’t think I was going to be able to get the dog back by myself. After another block of chasing him down I looked back and there were 5 other men behind me pursuing him. Which felt like a miracle.

‘So at this point I held back and let them take the lead as I have no business trying to restrain a full grown man. I went back to get my car( it was still running ) and drove to see if they caught him.

‘6 blocks down from where the chase began a big group had gathered and it look like the man no longer had the dog. So I pulled over to make sure that dog was going to be cared for. I didn’t see the brawl but I was told that the man did not give up the dog without a fight.

‘And this is the tail end of a heated fight that ensued. The cops came and took the guy. I waited with dog til another cop came to take them to the hospital. The dog was covered in filth and looked like it had been not taken care of for months.’

Revealing what has since happened to Champion, Malone continued: ‘After coming out of the hospital , the dog is ok but has a fractured rib , bone breaks in it’s hind legs and another fracture in its right paw. It was absolutely horrific seeing an animal treated this way.

‘I’m sorry that it ended in a brawl but the dog was going to die. No question. I can’t imagine the level of torture it had suffered until this point. And now it’s safe in a hospital. Still no word on its owner.

‘Also because it important to know , I saw the man get arrested and he wasn’t bleeding and seemed coherent after this filmed altercation.’

Malone concluded: ‘Update: the dog was chipped and back with his owner. The dog had been missing for a week. His name is champion and is happily out of hospital and with his owner. Watch out for the go fund me link soon. His multiple surgeries will be a lot for the owner to take care of alone.’

She subsequently shared a GoFundMe link to raise cash for Champion, which had raised more than $6,000 as of Wednesday night.

Builder accused of murdering two prostitutes told pals one of his ‘victims’ had ‘taken...

PICTURED: Girl, 5, who screamed ‘but I’ve been good’ as her mom strangled her

US Midterm Elections 2022: Biden says he intends to run in 2024 presidential race